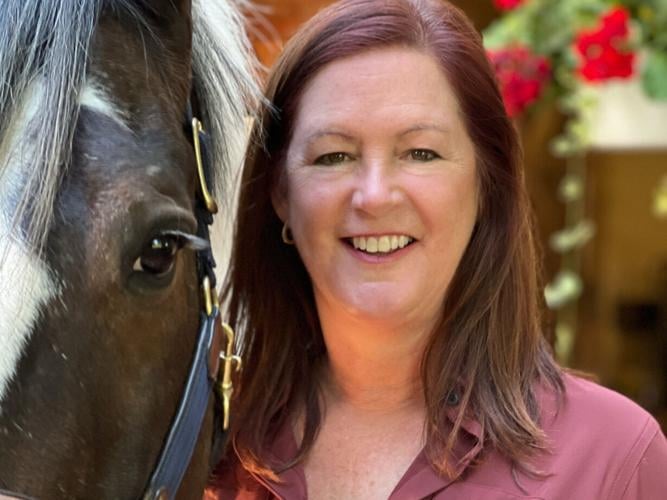 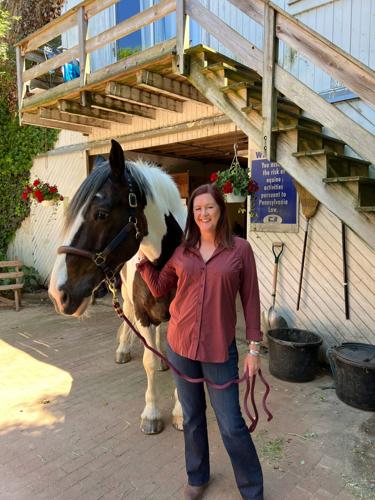 Laura Rowley on her ability to communicate: "I have come to clearly interpret what I hear from horses and other animals. Sometimes it is like a movie in my head or even seeing a stick figure with a red dot indicating where the horse feels pain or the animal might tell me with words I hear in my head.”

Laura Rowley has a special gift. And although you might be skeptical of her unique skills, countless horse owners and horse professionals including veterinarians, farriers, chiropractors and massage therapists have seen the successful results of her work as a horse communicator.

Communicating with horses and other animals is something Rowley admits can be viewed by many as on the edge of traditional medical and psychological diagnostic practice, but she believes it is just one part of a growing holistic approach to equine care today and is gaining increased acceptance in the animal world.

Rowley is a Florida native who lives six months a year in Kennett Square, Pennsylvania. She grew up owning, riding and caring for horses. Like many horse owners, Rowley always felt she had a special bond with her animals but she told me she didn’t realize how close a bond until a nothing-unusual evening in 1994. After watering her five horses, she clearly heard a voice in her head that said, ‘Hey, I’m thirsty!’

“I was startled to say the least,” Rowley said, “and walked back through the row of stable stalls until I reached a horse named Lump whose water bucket I had emptied but forgot to refill.”

Rowley said she filled the bucket and the horse proceeded to gulp the water. “I thought this is weird,” Rowley smiled as she described the scene, “but he certainly was thirsty and I didn’t think too much more of it. I had a close bond with all my horses and figured I was getting vibes because of it.”

A few years later while visiting with a friend who had a very sick dog, Rowley sensed that the animal had a liver issue. “I actually could visualize the dog’s diseased liver and my friend’s vet looked at me in a strange way after confirming the malady and said ‘Huh’! It was then,” Rowley said, “that I began to feel with some certainty that I had strong intuitive powers and increased right-side brain activity. And, it was a lot more than just feeling I hadn’t heard from my mom that day and maybe she’s wasn’t feeling well.”

In the weeks and months following her experience with the sick dog, Rowley found herself volunteering to help friends whose horses and animals were having issues. “I also began to do some serious research on animal communication,” she said. Rowley became so busy that by the end of the 1990s, her work grew into a small business and she began to charge for her consultations.

“I went from helping friends a few times a week to helping horse owners several times a day. I needed an assistant just to help me organize my work and manage the calls from the people seeking help.”

Helping owners find solutions for medical and behavioral issues with horses and other animals has been her passion ever since.

Rowley says she is completely self-taught. “I learned by doing and over time I have come to clearly interpret what I hear from horses and other animals. Sometimes it is like a movie in my head or even seeing a stick figure with a red dot indicating where the horse feels pain or the animal might tell me with words I hear in my head.”

Rowley explains, “If it is a behavioral problem brought on by a non-medical situation like living or riding conditions, I can advise horse owners of possible solutions but if it is medical or physical in any way I suggest they seek the proper veterinary and professional care as appropriate.”

One horse owner who had worked with Rowley confirmed what she said. Kerry Parker, a horsewoman and stable owner from Pepperell, Massachusetts, was happy to talk. Parker was introduced to Rowley through a horse-owner friend from Maine more than two decades ago. Parker explained that at the time she had a problem horse that was acting up and even getting dangerous in its barn stall and trailer. “I couldn’t figure out the reason for the behavior nor could any of my horse-owning colleagues,” Parker said.

“Remember, there was no Facebook back then, no social media, no way easily to research professionals you were working with for the first time for references as you do now. Sure I was skeptical and thought ‘this might be weird,’ but I really needed help and hoped Laura could tell me something.”

Parker said she was blown away as Rowley relayed a clear message from her horse that the behavioral problem was a reaction to living conditions. “The horse didn’t like the stall he had and the way he faced,” Parker said, “and also was not comfortable on the side of the trailer I loaded him on when transporting.” Parker moved the horse to a new stall that day and its behavior changed dramatically overnight. She explained, “He stopped nipping at visitors and after several road trips, he was much more comfortable standing on the opposite side of the trailer where he had less pressure on his feet.”

Parker described a second example of Rowley’s work. She explained that a friend had an event horse that was ridden by her 12-year-old daughter and the pony began to buck immediately after jumping. It was pretty scary for the rider. “It turned out,” Parker said, “that the saddle cushioning that was used to absorb the shock when the horse landed (and used almost universally for jumpers) was digging into the horse’s back and the horse told Laura emphatically, ‘I hate that pad, it hurts!’ It was changed and the problem was solved.”

Parker described additional instances when her own horses and her friends’ horses were helped by Rowley over the years.

“Oh, my goodness,” Parker said, “I am a believer in her abilities to see problems and point owners to solutions or professionals who can help with medical issues.”

There’s ongoing research on interspecies communication in the scientific community, including work by psychologist and author Dr. Judith Orloff, an empath and intuitive healer who is on the psychiatric clinical faculty at UCLA.

Orloff calls intuitive empaths unique in that they combine empathy and the ability to understand and share the feelings of others with instinct and perception, something she calls a “powerful gift.”

Dr. Bonnie Beaver, a veterinarian and professor of clinical sciences at Texas A&M University’s College of Veterinary Medicine, has written on the subject as has Dr. Antonia J.Z. Henderson, a research and equine psychologist, living in British Columbia, writing for the Canadian equine publication Horse Sport.

Two-way communications between owners and their horses has always focused on facial expressions, vocal cues and body language with horses responding with similar cues. It is believed horses are able to recognize most emotions in the tone of a human’s voice and that they like to be spoken to in a calm, generally low-pitched natural voice.

What Rowley and a small group of others do is take much of this ongoing communications research to the next level to be able to interpret messages from horses and other animals.

“For me,” Rowley said, “I actually am able to visualize as well as hear what the horses are talking about especially if they have specific pain brought on by medical issues or behavior problems that were caused by bad living conditions or bad riding.”

Rowley works with clients by appointment and does several consultations each day primarily through telephone conversations with owners and trainers. “It is pretty intense and exhausting,” Rowley said, “and I can be wiped out at the end of the day.”

Most of the clients Rowley works with own expensive equestrian horses that have become part of their family and owners want the best care available for them just as they get for their family. “When everyone is stumped,” Rowley says, “I can be the call of last resort to help pinpoint the problem.”

Rowley indicates that 70% of her clients are horse owners and she feels most have at least an inkling of what is going on with their animal and need confirmation as to where to seek the proper treatment.

Rowley deals primarily with two classes of problems — medical issues or performance issues. “Medical problems usually need professional treatment,” she said, “and my seeing it might confirm what a horse owner has been feeling. But performance issue,” she explained, “can be more difficult because the reason for the problem has to be pinpointed and that only can be done with the horse’s help.”

Rowley said that information she usually gets clearly from the animal and at times can be difficult for an owner to accept.

Rowley believes what she does continues to evolve and she can face different challenges with each client. “Owners are very upset if their horse is in pain or exhibiting bad behavior and they want help to put them on the road to recovery quickly,” Rowley said.

Besides her daily consultations, the horse communicator does large barn seminars for owners and trainers and has written about and hosts a radio podcast on animal communication.

Watch a video of Laura Cowley:

You can learn more about Rowley and her work at: http://www.laurarowleyhealer.com