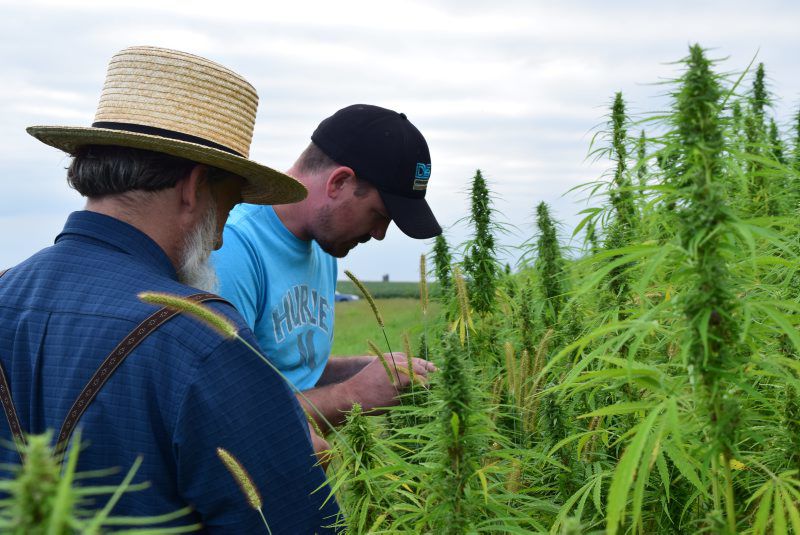 Daniel Stoltzfus (left) and Lloyd Huyett have formed a partnership in order to grow several acres of industrial hemp as part of a wide research initiative. 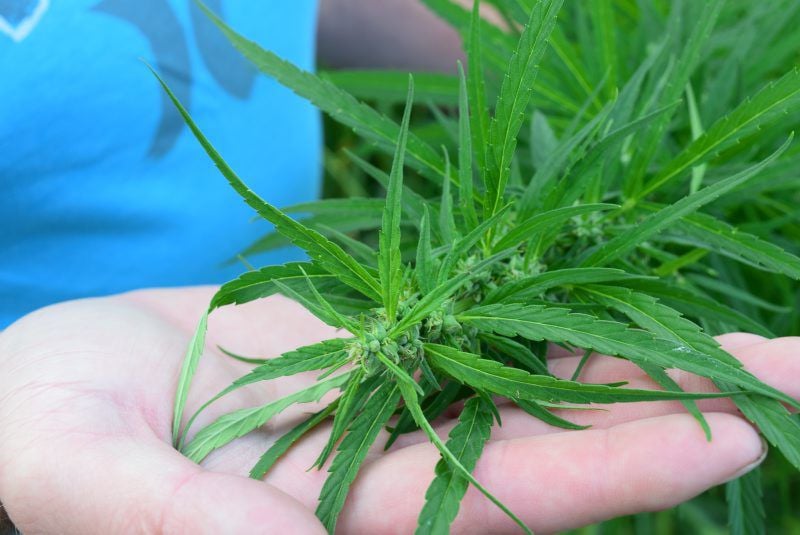 Lloyd Huyett IV examines the flower of an industrial hemp plant, which will be harvested and processed to make CBD oil marketed under the Helping Hands Hemp brand.

Daniel Stoltzfus (left) and Lloyd Huyett have formed a partnership in order to grow several acres of industrial hemp as part of a wide research initiative.

Lloyd Huyett IV examines the flower of an industrial hemp plant, which will be harvested and processed to make CBD oil marketed under the Helping Hands Hemp brand.

“I told my wife that if I didn’t do this now, I’d regret it for the rest of my life,” Lloyd Huyett IV said while striding beside a 5-acre industrial hemp field one late August evening on the eastern edge of Lancaster County near Morgantown.

Industrial hemp was illegal to grow in the United States until the 2014 Farm Bill gave states the ability to set up research programs to study this ancient crop that’s been out of production in America for some 80 years.

Huyett is one of 35 permit holders in Pennsylvania who applied to grow hemp in 2018, and one of only a handful of such growers in Lancaster County. He’s not a farmer, per se; he’s more of an entrepreneur. But when he heard about the hemp research program, he knew he had to be a part of it.

Not too long ago, the son of a family friend was suffering from epilepsy and was scheduled to have brain surgery, but the family started administering cannabidiol — or CBD — oil to the child, and the struggles of epilepsy lessened for the boy and he was able to resume a normal childhood.

“He started taking CBD, and he ended up not having to get brain surgery, and he actually went back to school and everything. So that’s what really turned me on to hemp,” Huyett said.

CBD oil is derived from hemp, but because hemp has been illegal for so long, there is very little scientific research about its medicinal properties. The anecdotal evidence of its benefits, however, is staggering. The components of the weed are being used to treat a wide variety of ailments and conditions, such as chronic pain, inflammation, dementia, epilepsy, post-traumatic stress disorder, attention deficit hyperactivity disorder and more. There is even some early research that might lead to CBD being used to fight cancer.

Huyett and his wife, Beth, decided to start a business called Helping Hands Hemp with the mission to make a product that can have a positive impact on people’s lives.

But in order to grow hemp, you need land — one thing in which Huyett was in short supply That’s where Daniel Stoltzfus came in. He’s a farmer and has also witnessed firsthand the healing effects of CBD: his niece has cancer and uses CBD to mitigate her pain and keep her appetite up.

A partnership was born. Huyett handles the business and processing side of things, while Stoltzfus handles the farming. After harvesting, the hemp will be pressed into oil and sold under the brand Helping Hands Hemp.

“You know, a lot of people when they hear ‘hemp,’ they’re right away thinking marijuana — and it’s not. You know, you don’t get high off it and that’s one thing that is very confusing to people,” said Huyett.

Pennsylvania Secretary of Agriculture Russell Redding, a proponent of industrial hemp, calls the marijuana stigma “a manufactured stigma.” He called it unfortunate because industrial hemp was unfairly categorized as a drug and thereby taken out of agricultural production three generations ago. But with the pilot program in the state, industrial hemp is staging a comeback.

Geoff Whaling, chairman of the National Hemp Association, foresees Lancaster County and neighboring Berks and Lehigh counties becoming the epicenter for industrial hemp production, not only in the state, but in the entire country.

“If you look at the three counties, not only have they had their existence deeply rooted in the hemp crop, but we now have all of the major components that are required in order to build a hemp industry,” Whaling said.

“We have very successful farmers. We have lots of farmland. We have an incredible highway distribution system. We have all of the beginning threads that we can weave into an industry.”

The U.S. imports nearly a billion dollars’ worth of hemp. Local supporters of a domestic crop envision a future in which farmers are once again allowed to grow it here in Lancaster County.

Listen to Lancaster Farming’s new podcast series on the future of industrial hemp, which includes exclusive interviews with Pennsylvania Secretary of Agriculture Russell Redding and Geoff Whaling of the National Hemp Association.