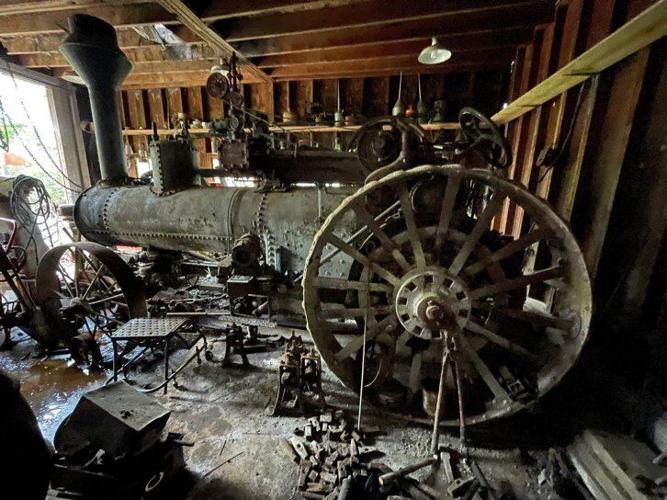 This 1890s Frick Eclipse steam engine was discovered by Hurley Auctions as crews explored the contents of outbuildings on a property in Newville, Pa. The steam engine fetched $20,000 during a Nov. 5, 2022, auction. 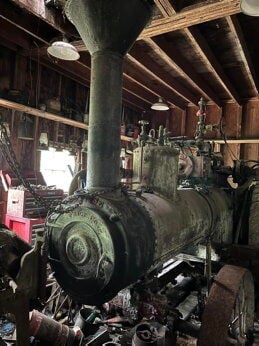 With its towering smokestack and tubular body, the 1890s Frick steam engine resembles a steam-powered train locomotive. This 1890s Frick Eclipse steam engine was discovered by Hurley Auctions as crews explored the contents of outbuildings on a property in Newville, Pa. The steam engine fetched $20,000 during a Nov. 5, 2022, auction. 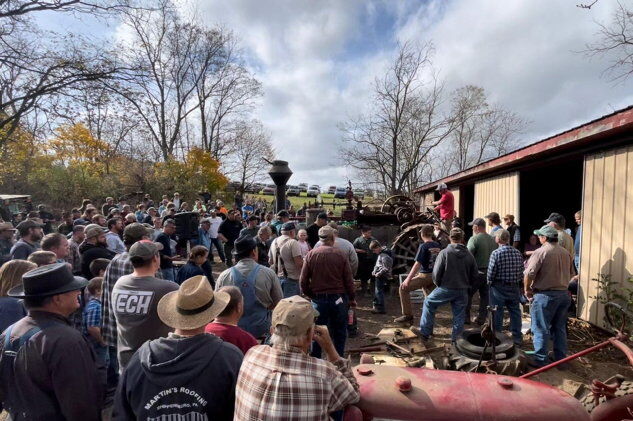 Auctioneer Matt Hurley knew he had something special when trees had to be cut just to reach the abandoned home and outbuildings for an upcoming auction.

Every space was packed full with antique treasures, but when Hurley’s crew crawled inside a partially collapsed garage on the Newville, Pennsylvania, property, they discovered a once-in-a-lifetime find.

Tucked inside the garage in an area not affected by the rotted roof was a massive Frick Eclipse steam engine, which Hurley estimated dates back to the 1890s.

The steam engine was sold by Hurley Auctions on Nov. 5, and it brought $20,000 from a bidder in Waynesboro, which is where Frick Co. was founded in 1861.

Hurley said the steam engine generated a tremendous amount of interest in the days leading up to the auction, and as his crew members continued to comb through the buildings on the property, they found items that made the historic piece even more special.

The property was owned by John K. Hooper, who died last year. Hooper was a Civil War re-enactment enthusiast and a member of the Williams Grove Steam Engine Association, according to Hurley. For decades, Hooper collected tractors, trucks, farm equipment, tools and antiques, packing it all away inside a house and buildings on the property.

Among the items Hurley found was paperwork detailing when Hooper bought the steam engine in 1969 for $2,500, which was financed for 36 months.

But there was more.

The Frick steam engine is powered by a boiler, and there is a risk of explosion if the boiler is in poor condition. In 2001, an antique steam engine exploded at the Medina County Fair in Ohio, killing four and injuring 49 others. The state Department of Labor and Industry inspects steam-powered boilers and certifies them.

Hurley was able to locate the certification for the Frick steam engine just days before the auction.

“The boiler inspection is really important, and this one is from the 1970s so I don’t know if it will need to be done again,” he said. “But it speaks to the originality of this piece.”

When the Frick Co. was founded by George Frick in the mid-1800s, it built horse-powered and steam engines under the patents of Peter Geiser. These engines would revolutionize history by greatly reducing the time and labor it took to harvest and process grain.

The “Eclipse on Wheels,” which is the model found on Hooper’s property, was the first portable steam engine produced by the Frick Co. in 1874. It was primarily used for threshing grain, ginning cotton, sawing lumber, and, on occasion, transporting goods.

The sales of steam engines reached their peak at 700 per year in the first decade of the 20th century. The Frick steam engine business came to an end in 1945. In the 70 years between 1876 and 1945, the Frick Co. sold nearly 13,000 portable and small stationary engines, and roughly 4,500 traction engines.

Hurley said the steam engine is the first one he has sold in 30 years as an auctioneer. The piece is unique in many ways, he added, but the story of where it resided for decades adds to the appeal.

“It sat in this garage since the 1970s, and remarkably as the roof rotted apart the steam engine was in the one spot inside where it was protected,” Hurley said. “We cleared everything away from it, found that the engine and wheels still turned so we pulled it outside. It was probably the first time it had seen the sun in 50 years.”

Several days before the auction, the steam engine generated had more than 4,000 hits on Hurley’s website. He fielded calls from all over the East Coast as interested bidders sought more details about the piece.

Still, on auction day, Hurley didn’t know what to expect.

“This is something that had been sitting since the 1970s in a shed with a rotted roof. There were so many unknowns with this that we didn’t know what would happen with the bidding,” he said. “I was a little nervous.”

When the steam engine came up for bid, however, it attracted a large crowd and plenty of action.

According to Hurley, the successful bidder intends on restoring the steam engine, and had been searching for a Frick model for the last 10 years.

“It was the perfect ending, and the price of $20,000 was in the range of what we expected it to bring,” Hurley said. “This was a memorable auction considering we had to cut trees just to get onto the property, the house was empty for 25 years, and the buildings were all overgrown. You just knew it was a place that held treasures.”

In fact, the Hooper property contained so many treasures that Hurley didn’t have time to catalog everything before the Nov. 5 sale. An enormous amount of antique items remain, and they will be sold at another auction this winter. The date and listing will be posted at hurleyauctions.com.

“The highlight of the sale was definitely the steam engine, but this place was packed with fun stuff for anyone who likes dirt, rust and grease,” Hurley said. “To an auctioneer, places like this are really special.”

A collection of vintage tractors dedicated to the art of collecting and restoring classic farm tractors.

Elwood Homer's 1933 1220 Wallis tractor has been with his family for nearly a century and has seen plenty of changes on the family farm.

A Lifetime of Love for International Harvester Tractors

Spot the Fake: Tips for Telling the Actual Age of So-Called Antique Furniture

Reproductions these days can be collectable investment pieces, but if you're looking for genuine antique period furniture, here's how to assess the authenticity of a piece.

Return Day festivities include music, food and a parade and have been celebrating the right to vote for over two centuries.