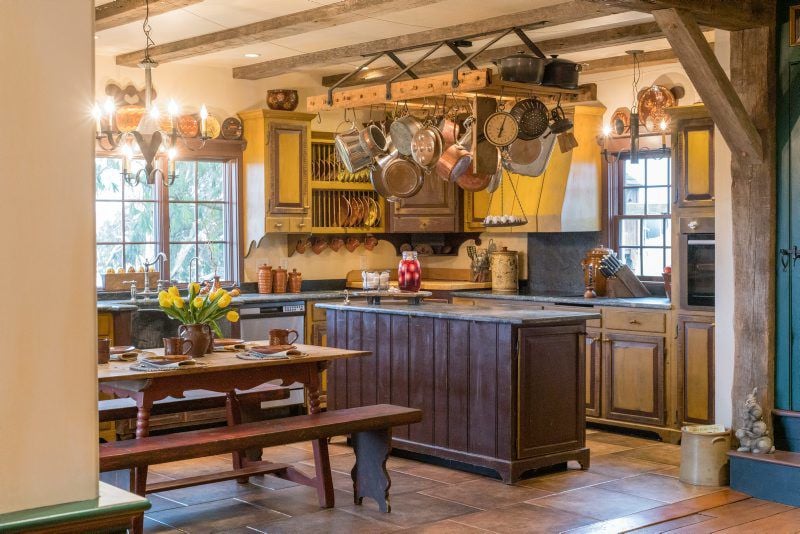 A view of the kitchen. 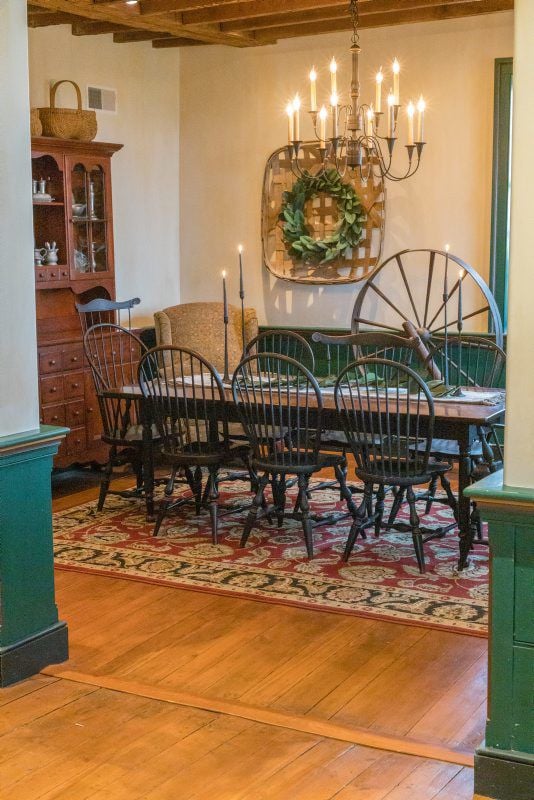 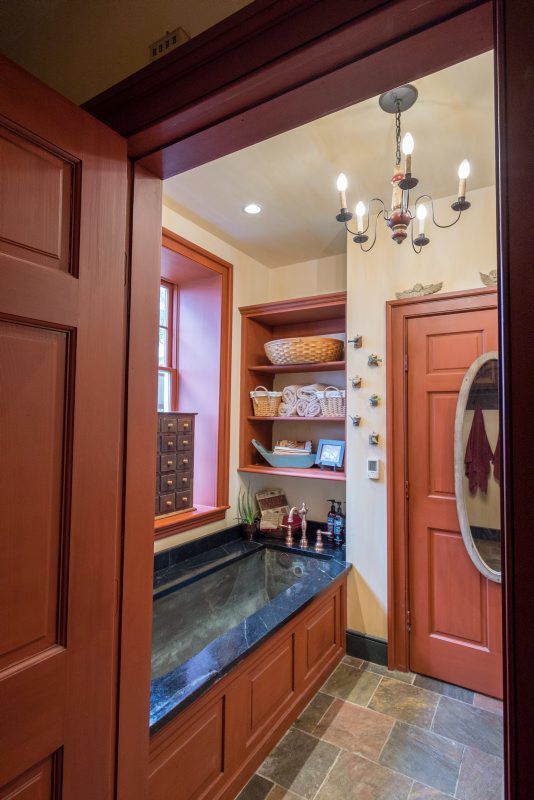 The bathroom focal point is the galvanized copper tub that David encase in soapstone and redware painted window shutters. 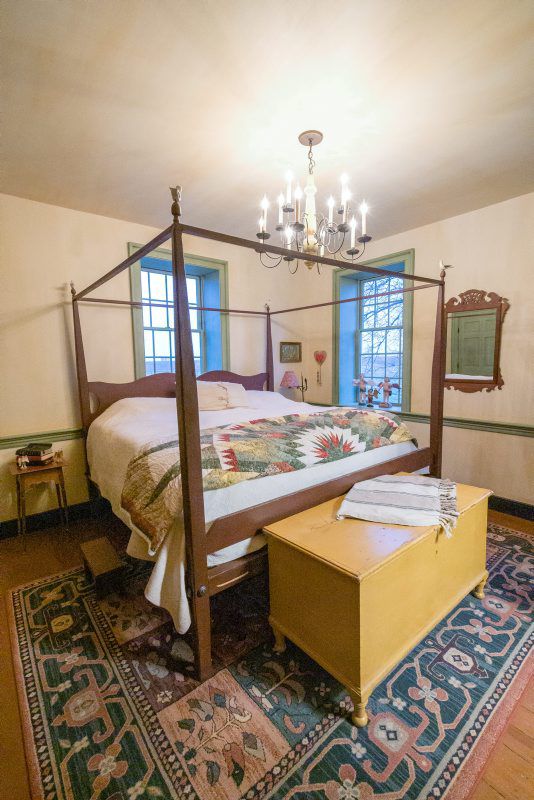 A inside look to one of the Weaver’s childerns bedrooms. 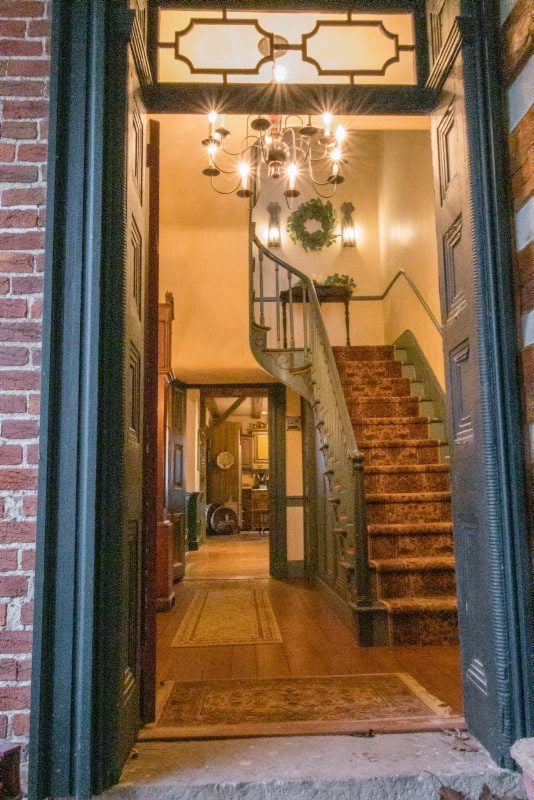 The view looking into the 1846 Berks County farmhouse shows the grand Georgian staircase. 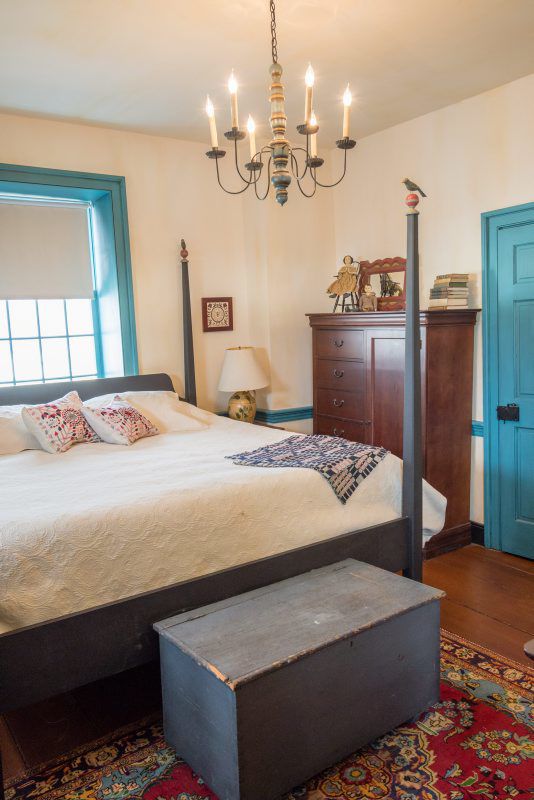 A inside look of the Weaver’s teenagers bedrooms. 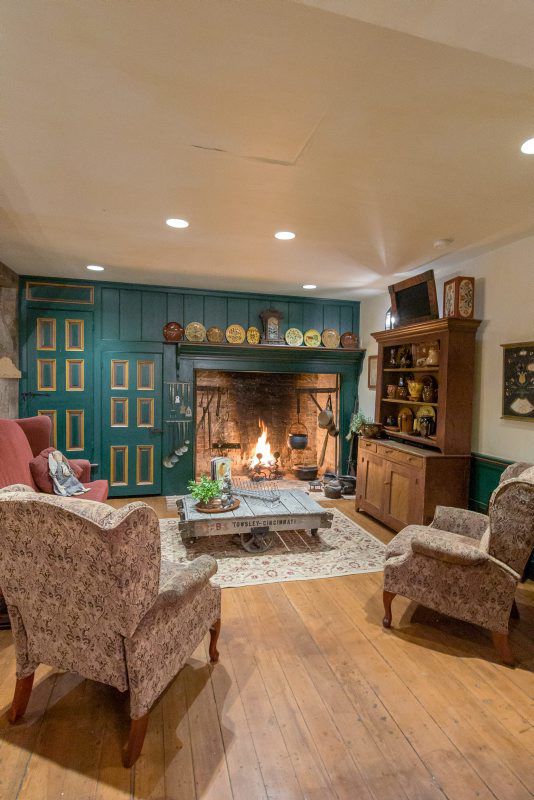 The fire is lit for a cozy time in the living room of the Weaver household. 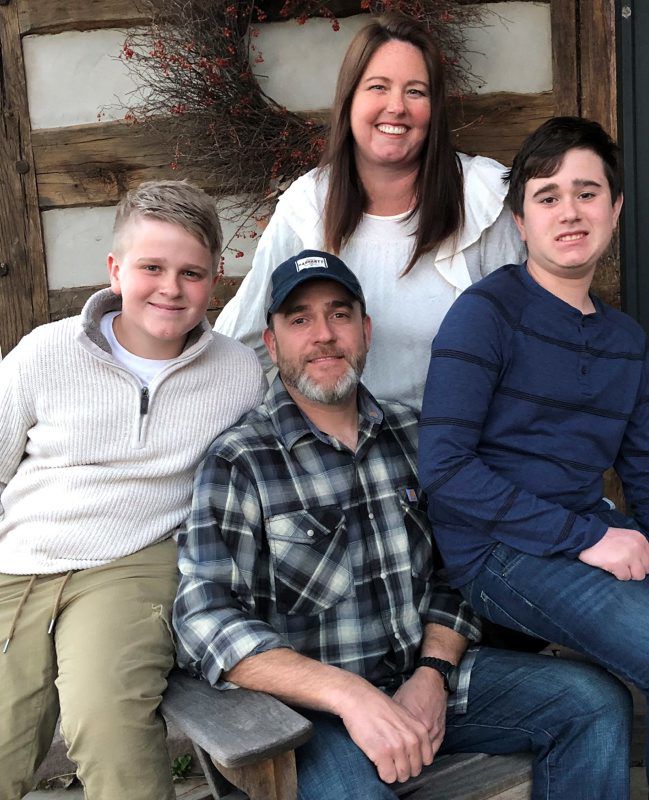 Clockwise from left is Caden, Yvonne, Gibson and David Weaver. Yvonne and David restored their home to create a safer enviroment for their children.

WOMELSDORF, Pa. — Stepping into the foyer of Yvonne and David Weaver’s 1846 farmhouse, there is the ease of familial warmth, pride and love the couple has for their home and children. It’s easy to get lost in the detailed charm and love that cascades through the house, such as the grand Georgian staircase painted light blue with an oriental carpet runner gracing the steps.

The three-story farmhouse sits on a 100-acre farm, Clear Springs, which was David’s family home until he took over the poultry business. However, a decade ago the farmhouse’s interior consisted of trends of the past — pastel-colored tiles on the bathroom floor, floral wallpaper, carpeting throughout each room and lead paint.

Gibson and Caden, the Weavers’ two sons, were playing in the formal living area, which was at the time their playroom. Being curious children, they would climb around on the deep-set windows, but playtime turned dangerous when they both were exposed to the lead paint that coated the walls and window sills.

Gibson, 14, who is autistic, suffered the most from the lead poisoning. His doctors recommended that the Weavers move out of the farmhouse for his health. Devastated by the news and unable to move because of the poultry business, the couple made the decision to remodel the entire farmhouse.

Breathing new life into the house began in 2009. The Weavers began stripping the carpets, removing the lead paint and exposing the bones of the old house. They moved in with David’s parents during the 10-month restoration.

The Weavers’ decision to go with a Colonial-style interior was an easy one as it had been a dream of Yvonne’s ever since she visited Charming Forge. Standing awestruck in one of the rooms at the Berks County estate, Yvonne turned to her husband and said, “this is what I want,” she recalled. Soon after, she and David began collecting Colonial interior magazines and books to make the home of their dreams.

The couple has a deep appreciation for the craftmanship of the Colonial interior design — it’s classic and timeless. “The style doesn’t really go out,” David said.

Yvonne, a local artist, focused on the painting and décor. She applied three coats of paint on the walls throughout the home. She would first lightly skim the walls with a cream wash using a dry brush to mimic the yellow ochre that is a common look of the plaster in older homes, Yvonne said. She also painted the trim around the windows. The walls throughout the home follow the Colonial color palette of green, yellow, light blue and redware.

David, along with his friend Jonathan Bastian, an 18th century carver, did the majority of the reconstruction. He and Bastian focused on bringing out details that were authentic to the era. The Weavers used general contractors for windows, electric, plumbing, heating and cooling.

In the now formal living room, David and Bastian removed the wood stove and brick casing to reveal the open-face hearth. David re-laid the brick at the base of the fireplace and fixed up the chimney so the family could occasionally heat their home with a live fire. Another major change was closing off access to the downstairs bath through the now living room, which was originally the dining room. In the formal dining room, which was the children’s playroom, the couple removed the drop ceiling and exposed the house’s original chestnut wood beams. Exposing the hardwood floors after years under carpet in the foyer, bedrooms, formal living and dining room, the Weavers applied two coats of stain to give them a polished look.

The kitchen counters and apron sink are cool soapstone, a smooth and natural stone that can withstand constant wear while still keeping its striking look. Golden-painted wooden cabinets line the wall and a dishware rack that holds the family’s redware plate set. Above the kitchen island, David created the pot rack from an old hay rack he found. He also restructured the iron straps from a door to hoist the rack. They also replaced the kitchen’s former white vinyl design with big stone square-like tiles.

In the bath, the focal point is the galvanized copper tub that Yvonne found locally, which David encased with window shutter panels for better installation. The tub also has soapstone around the top.

Each of the bedrooms sticks with the theme throughout by having four-poster beds and clothes presses, also known as dressers. The rooms are lit with a mock-tapered candle chandelier and the wide, wooden hardwood floors are dressed with an oriental rug. The children’s rooms lack the normal teenage décor of posters of famed celebrities or have a theme that defines their growing personalities. The teenage boys and Yvonne’s niece have learned to respect and appreciate their rooms, Yvonne said. The Weavers also try to camouflage modern technology like their television, which is decorated with a painted wood border.

The Weavers felt a true sense of accomplishment with the restoration. Not only were they able to create a safe environment for the family, but Yvonne and David can enjoy the fruits of their interior design throughout their life together.

The following is a list of canceled 2020 fairs by state. This page will be updated as we receive information. For further information, please contact the fairs directly. Read more