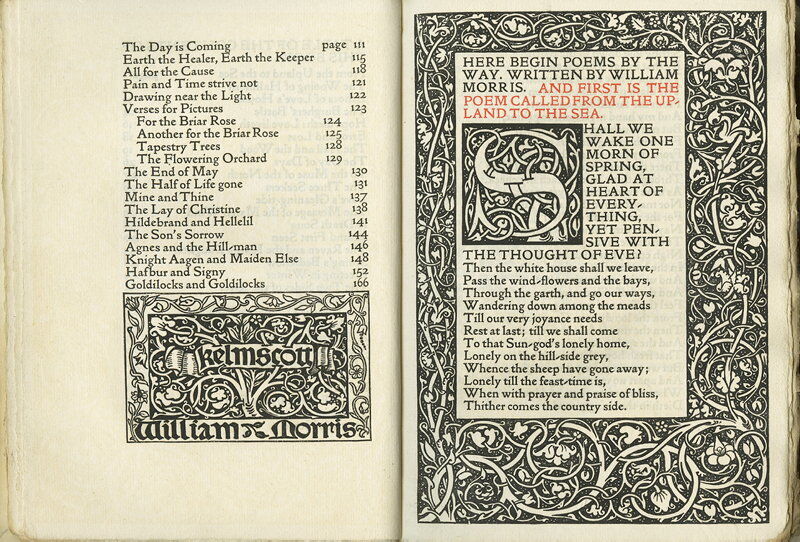 A book of William Morris poems. 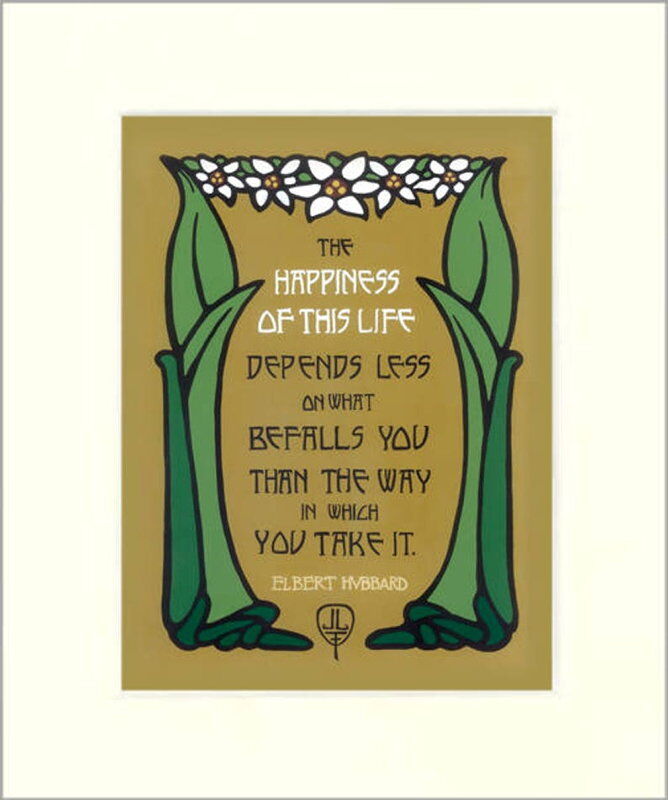 A reproduction of an Elbert Hubbard motto.

Usually when the arts and crafts movement is thought of, it is furniture, pottery and metal objects that come to mind. But for book collectors, books by William Morris and his Kelmscott Press are works of art.

A rare, signed first edition of his “Poems By The Way” is a treasure trove of his illustrations. AbeBooks, a book dealer, is offering one priced at $8,500.

Englishman William Morris, already famed as an artist and designer, founded the Kelmscott Press in 1890, inspired by Gothic manuscripts. The emphasis was on heavy type and woodcuts, along with floral borders. The first book, published by Morris in 1891, is “The Story Of The Glittering Plain,” was published the same year as a facsimile in America.

CLUES: From the beginning, craftsmanship was all-important. There were limited editions produced by hand methods. Books reflecting the arts and crafts movement were on quality, heavy paper using extremely black ink and often red accents. Bindings often had paper-covered boards, vellum with ties and blind-stamped leather. Illustrations were produced by woodcut engraving or relief methods. Sections often began with decorated initials. The result was an overall Medieval look.

By 1895, what came to be known as the arts and crafts style of printing became popular in America. Not only commercial publishers but dozens of private hand presses were operating on the East and West coasts as well as in middle America.

However, the most successful was Elbert Hubbard’s Roycroft Press in East Aurora, New York, from its beginnings in 1895 until 1915, at Hubbard’s death. His books were a household name across America. It was a brief meeting with Morris in 1895 that influenced Hubbard and set the style for his own printed materials. Roycroft books used chamois-bindings, old-style type, hand-illuminated initials, imported handmade paper and bordered title pages.

In addition to Roycroft books, there were mottoes that are collectible. They are woodblock prints, hand colored and signed with the Roycroft script mark and orb.

One charming example, found by a collector, said, “I love you because you love the things I love.” Though rather simplistic, these mottoes would be an important addition to any arts and crafts printed items collection. Equally important would be copies of Roycrofters magazines.

Collectors look for the first three books from the Roycroft printing shop. The first was set and printed on a Washington hand press. It was “The Song of Songs: Which is Solomon’s Being a Reprint and Study,” by Elbert Hubbard. It and the second book were printed in 1896. “The Book of Job,” which was printed in 1897, printed only 350 signed copies. It is considered one of Roycrofts’ most beautiful books with hand-illuminated watercolors and gold ink.

All Roycroft editions were signed by Elbert Hubbard manually, but not personally. Other times they were signed by authorized secretaries. It takes an expert to know which is authentic and adds to the value.

Today’s printed business cards are a far cry from the colorful, even sometimes humorous, advertising trade cards of the past.

Many Types of Mourning Art Made, From Paintings, Prints and Pottery to Jewelry

Redware was an important part of early American food service and decorative objects in 18th and 19th Pennsylvania. A rare decorative item can still be worth hundreds of dollars.