When dad Richard Kowell gave his 8-year-old son, Don, a model circus truck, he likely never imagined that it would launch a lifelong hobby in his boy.

“It was a really good-quality, scale, diecast truck — a Chipperfield, an old-time circus name in England, made by Corgi,” Kowell said of that long-ago gift from his father. “Corgi produced a series of circus trucks based on Chipperfield, a real circus. They’re still collector’s items, but not made anymore.”

On eBay, diecast Corgi Chipperfield circus trucks start at around $14 for a single truck and range up to $170 for a set.

Kowell is the vice president of business development for Granger Construction in East Syracuse, New York. Even as a youngster, he showed an ability to imagine and build, as he constructed wooden accessories for his circus truck.

His father took him to see the Clyde Beatty Cole Bros. Circus when it performed in Jamesville, New York, in 1964. The dazzling sights and sounds hooked young Don. After the circus was over, the Kowells stuck around to watch workers pack up the circus. That aspect fascinated young Kowell and helped him better understand the equipment’s construction.

As a teen, Don Kowell began building a complete model circus. His father believed his son’s creation was so good that he used his connections in the entertainment industry to reserve him a display area at the New York State Fair. Young Kowell spent the whole summer rebuilding the circus to make the 6-by-8-foot display “show worthy.”

“It was so well received that I spent a year rebuilding,” Kowell said.

His mother, Mary Kowell, helped him make tents, and he expanded the entire display by 8 additional feet with all the models in quarter-inch scale. He modeled it after a typical circus, with 12 acts of animation. 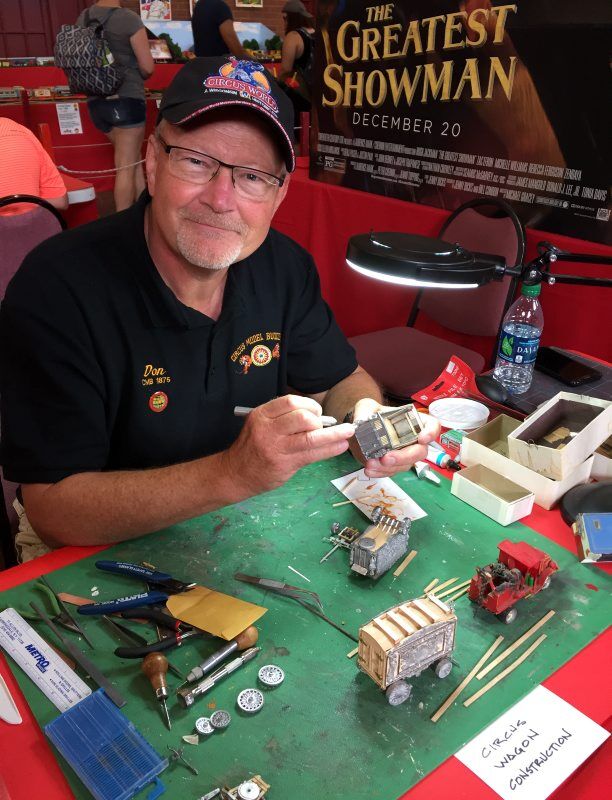 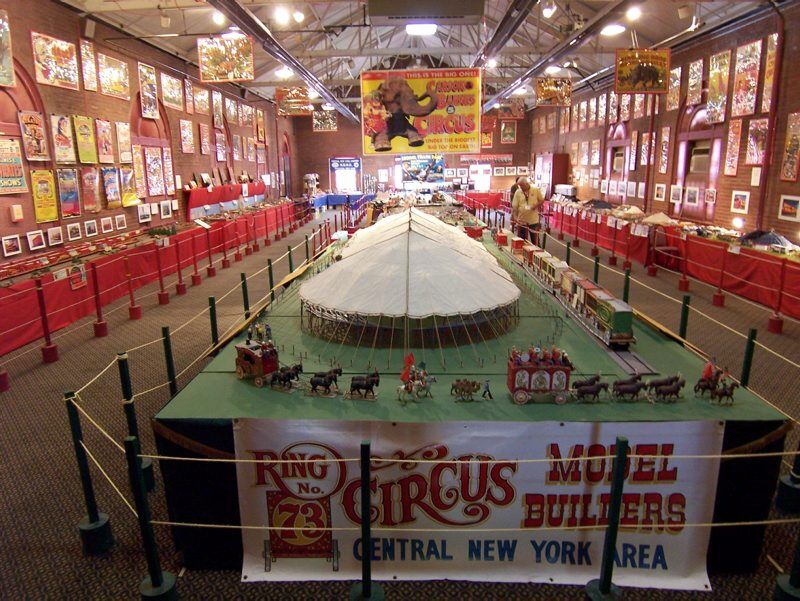 Many of the items on display at the New York State Fair come from the private collections of the Circus Model Builders’ group in Liverpool, N.Y., called the Hoxie Tucker Ring. 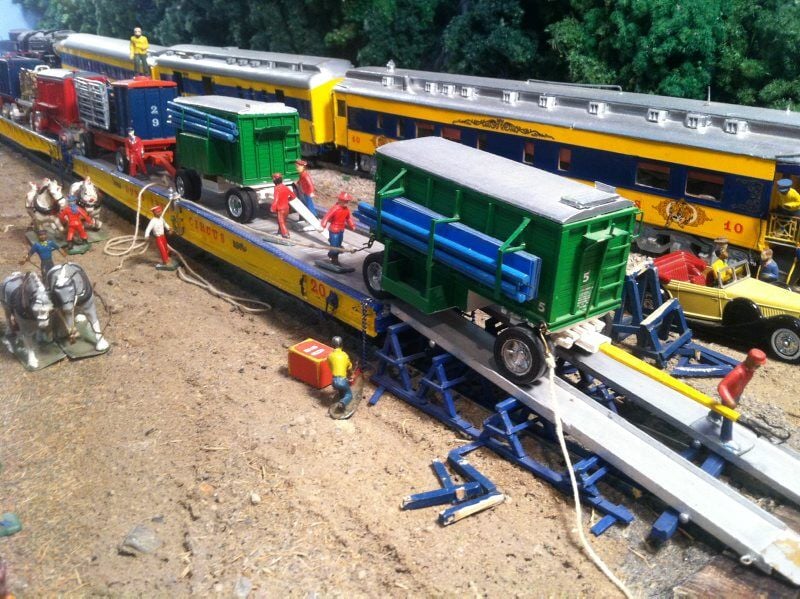 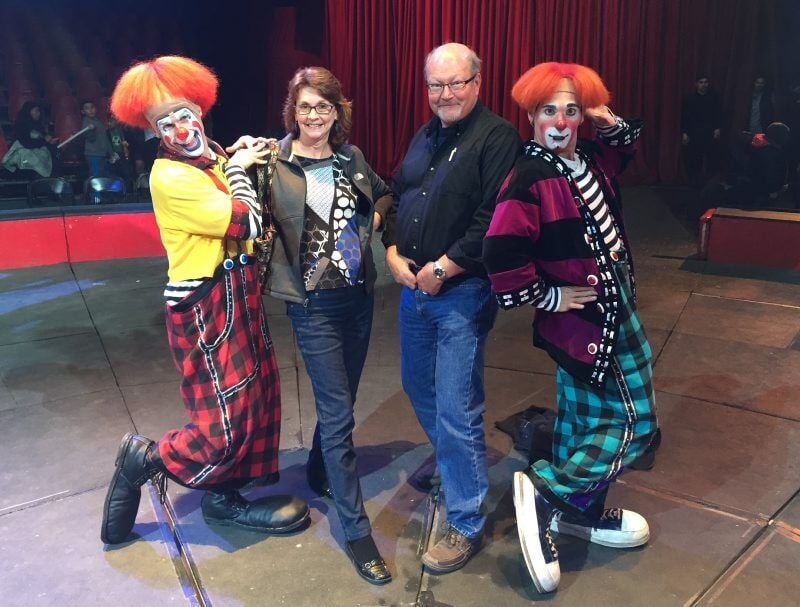 Barbara and Don Kowell clown around with some circus friends.

View Photos of Don Kowell and His Circus Collection

Many of the items on display at the New York State Fair come from the private collections of the Circus Model Builders’ group in Liverpool, N.Y., called the Hoxie Tucker Ring.

Barbara and Don Kowell clown around with some circus friends.

At age 16, Don Kowell also joined the Liverpool, New York-based Circus Model Builders group, which helped him learn more. The group is part of a national organization based in Bloomingdale, Illinois. His circus model was later displayed in three banks, four department stores, and a few shopping malls before he was 18.

One of his biggest thrills in circus was in 1971 when his model helped promote the local performance of Ringling Bros. and Barnum & Bailey. The show asked him to be honorary ringmaster.

“I had a whistle and stepped in the ring to start the show,” Kowell said. “I was 17. It was quite a thing. I’ll never forget it.”

Autograph Books Were the Facebook of the Victorian Era

The busyness of college, launching his career, and marrying, paused his circus modeling building.

Fortunately, Barbara Kowell shares his hobby, beginning with their first date to a circus. Once the couple built a home in the late 1970s (while she looked at floor plans, he dreamed of a “circus room” basement), Kowell picked up the hobby again. Their basement currently brims with circus paraphernalia.

“As my wife will attest, my hobby has gotten out of hand,” Kowell said with a chuckle.

He owns 400 circus books, 20,000 color slides he has taken from circuses, 300-plus genuine circus promotional posters, and vast amounts of circus programs, tickets and other historical memorabilia.

“The value of these items is what someone is willing to pay,” Kowell said. “You can find models on eBay and circus sites on Facebook.”

Over the years, they have attended many circuses together, setting a personal best record of 22 in 2019.

Kowell helped found a “ring” or chapter of the Circus Model Builders in central New York named for Hoxie Tucker, a circus performer. The chapter began hosting model shows and has been invited to display at the New York State Fair, Central New York Train Show and other events. It has also set up at shopping malls for a three- to five-day exhibition with 20 to 40 exhibitors showing off their models.

For the state fair, 16 group members set up and tore down the display, which was housed in the Bistro Room of the Arts and Home Center.

Each year at the state fair, the group decides on a theme for the display and includes throughout the room artifacts from circuses, including circus posters from the 1930s to the 1970s.

One year, the state fair display alluded to the 2017 musical, “The Greatest Showman,” a movie based upon the career of circus man P.T. Barnum. Kowell said that a young girl, assuming he had been part of the movie cast, asked him, “What was your favorite song you sang in ‘The Greatest Showman’?”

Rarely does his group receive negative feedback. Occasionally, animal rights activists approach him at the fair and claim his display promotes a culture of animal abuse. But, Kowell and his family traveled to numerous circuses for decades and developed lifelong friendship with circus owners, managers and performers.

“We have never seen any animal abuse at the circus,” he said.

Attending actual circuses helps him reproduce details. He used to embarrass his children by taking a tape measure and clipboard to the circus to record the sizes of trucks and equipment. He also would burn through 30 to 40 rolls of film at a single circus.

“It’s been a really lifelong passion for my wife and myself,” Kowell said. “The friendships I’ve made all over the country have been amazing.”

From tractors to harvesters to potato trucks, Jim Chandler’s extensive collection of 1:16 scale farm equipment is something to behold.

A Guide for Buying Old Cast-Iron Garden Furniture and Accessories

Antique cast-iron garden pieces, including furniture, sculptures and urns can be valuable if you know what to look for.

Pieces of campaign furniture, or items designed to make life on the battlefront comfortable for officers, are now highly valuable collectables and home furnishings.