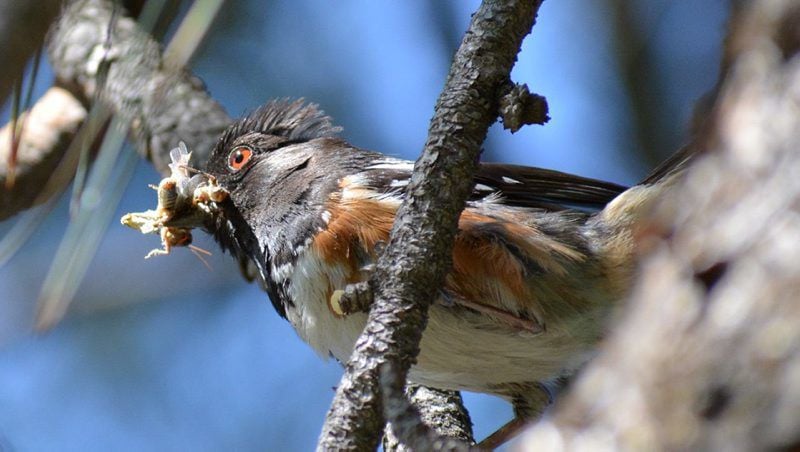 This spotted towhee has an insect in its beak that would otherwise be taking a toll on crops. The bird is a ground-foraging omnivore. 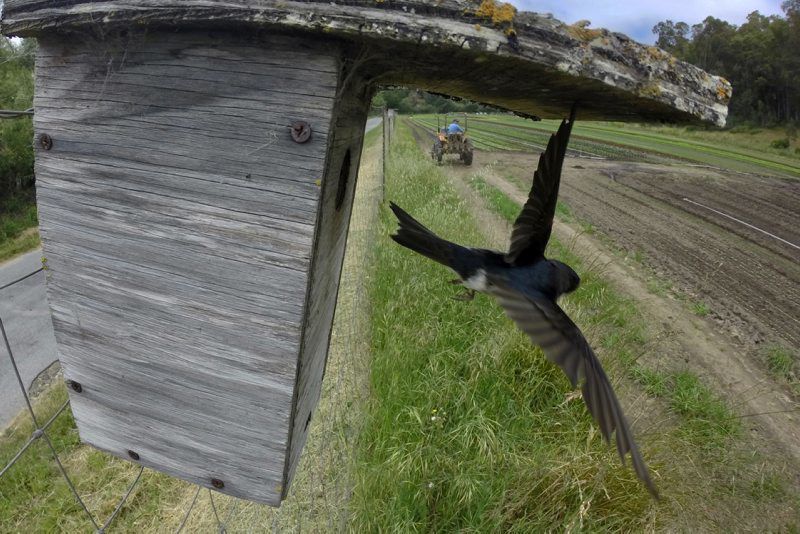 The tree sparrow is a beneficial insect-eating bird that will be attracted by nesting boxes located near cropland such as this farmer’s acreage, which has airborne insects. 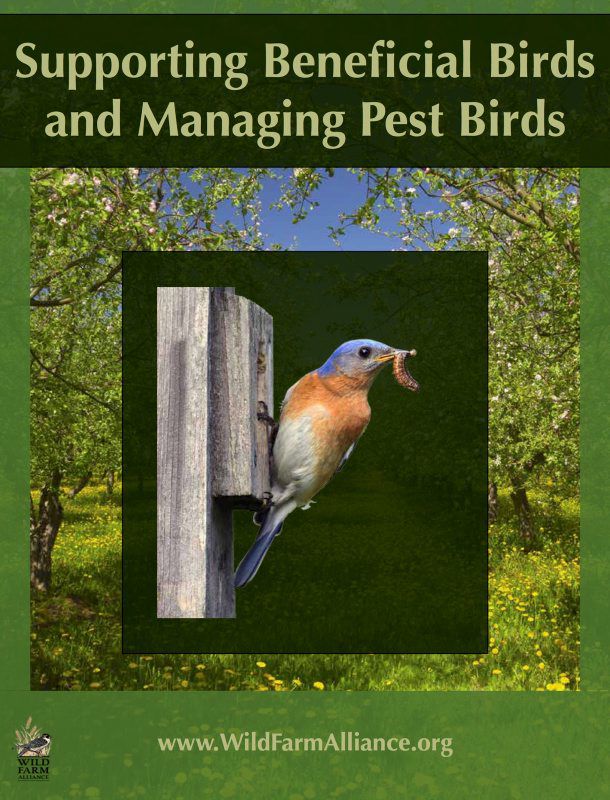 “Supporting Beneficial Birds and Managing Pest Birds” is a 62-page book produced by the Wild Farm Alliance to provide detailed information, charts and photos about birds, their habitats, nesting habits and dietary preferences alongside data regarding crops to which they can be helpful, or in far fewer cases, harmful.

As farmers and gardeners know, many birds are assets to their environments, but there are others that aren’t. The Wild Farm Alliance, based in Watsonville, California, recently presented a webinar on the subject, “Supporting Beneficial Birds and Managing Pest Birds,” featuring information from Jo Ann Baumgartner, executive director of the Wild Farm Alliance; ornithologist Dr. Sacha Heath of the Living Earth Collaborative; and Columbia University’s Dr. Sara Kross.

The presenters noted an upsurge in interest in this subject matter following recent news reports about a precipitous decline in North America’s bird population. They indicated that, while this is not a new phenomenon, it is only now receiving more publicity since gaining extensive long-term data.

Historically, when Scottish-American naturalist John Muir wrote about America in the late 1800s, he described skies that were “black with birds.” A recent Science Journal article reported that since 1970, North America has lost a troubling 3 billion birds. Grassland birds are in serious decline due to land being planted in crops instead of remaining grasslands used for grazing.

Heath identified agricultural expansion and intensification as one of the greatest extinction forces on birds. The combined loss of deciduous forests, grasslands and scrublands have forced birds adapted to those habitats onto croplands, with mixed results.

Aldo Leopold, the father of wildlife ecology, said that conservation will ultimately boil down to rewarding the private landowner who conserves for the public interest. However, said Heath, part of doing so requires landowner knowledge about bird foraging and life history traits, such as which birds are insect-catching, grain-eating, coniferous seed-eating or nectar-eating.

She said there are also seasonal effects on foraging. For instance, during breeding season, most songbirds are insectivores, feeding their young foraged high-proteins. However, in fall and winter, these same birds may eat seeds and grasses, or become omnivores, targeting other food sources.

Heath pointed out the complicated timing interaction between crop type and bird foraging. She went on to note that only a few bird species cause crop damage, which is why research is now geared to determining what different species consume and during which time frames. For instance, birds can benefit crops by eating crop pests, and reducing foliage damage on crops like broccoli.

In Holland, apple crop damage caused by caterpillars was reduced by 11 to 13% when great tit birds consumed them. Birds reduced cutworm and weevil populations in Quebec, while on hops fields in Washington state, birds helped with pest control, but invertebrate predators and parasites were more important to control than birds.

One important way to bring beneficial birds into play is to improve habitat for pest-eating birds. Heath said that, originally, hedgerows were developed to encourage pollinator habitat on the edges of cropland. However, hedgerows can have additional benefits, not only making a farm more aesthetically pleasing, but allowing a farmer’s hedgerow vegetation selection to target birds that will provide the desired predation.

An English study on hedgerows showed that the width and height of hedgerows increases the number and variety of breeding species attracted to them. Hedgerows and riparian areas — wetlands adjacent to waterways — have proved to add the greatest bird species richness. Generally, hedgerows which are closest to a planting area and farthest from woodland have been found to give the most “bang for the buck.”

How to deter nuisance birds is the other half of the equation.

Insect pest damage has been shown to be lower in fields with woods on their margins. This is because flocking birds, such as starlings, that do the most nuisance damage to crops, don’t spend much time in treeline areas.

Having more semi-natural cover in the surrounding landscape was associated with less bird damage to nearby strawberry crops in which insects caused the greatest toll.

Heath said that the first step in attracting desirable birds and discouraging nuisance birds is to spend more time watching birds on your land. She suggested using the Merlin Bird Identification Application to help recognize the various birds making their homes near you. The next step is to inventory the habitat on your farm adjacent to your acreage in production. If positive enhancements such as kestrel nesting boxes or wren houses have been added to your property, be sure to monitor them for nuisance birds like starlings and house wrens, which might take over their use.

Visual deterrents, such as owl decoys, can be of some effectiveness in deterring nuisance birds. Using bird netting to exclude birds is effective but expensive, so doing a cost-benefit ratio is essential. Exposing nuisance birds to their natural enemies, for example through falconry, is an effective option, but also a potentially pricey one, she said.

She said that one winery was able to reduce its nuisance bird population by 75 percent by relocating wild falcons to its property, resulting in a major savings for the owners.

She said that kestrels are small cavity-nesting falcons that can be attracted by properly designed nesting boxes. Studies showed a property owner received an estimated $84-$357 in increased revenue for each dollar spent on kestrel boxes.

Another cost-effective way to avoid crop damage is the use of raptor perches. Placing these perches every 100 meters in soybean fields made a major difference in rodent damage to these fields and their crops. Perches 15 feet high can be quite effective if they’re installed on hilltops not adjacent to trees.

Barn-owl boxes also serve as raptor perches. These boxes should be mounted at least 8 to 12 feet above the ground and should be checked and cleaned out at the end of each nesting season. Rodent predation of 215 pounds per barn owl pair over a year’s time translates to 2,500 mice and voles devoured.

JoAnn Baumgartner said that a combination of habitat, water sources and management practices make a farm bird-friendly. Nest boxes, perches, platforms and ledges attract birds, while riparian buffers provide the best of all worlds, offering food as well as cover from predators. She pointed out that the NRCS EQUIP program supports both technical and financial assistance for practices helpful to encouraging birdlife.

Baumgartner particularly encouraged the use of native plants, because they’re more beneficial to birds. She also emphasized the importance of providing water sources for birds to bathe, as well as muddy areas for swallows to use for nest building.

Another bird-friendly practice is managing fields safely with minimal use of herbicides, rodenticide baits and treated seeds, which cause serious problems if birds consume water or prey that have been affected by these poisons. Baumgartner urged minimal tillage of fields and using cover crops on acreage as a way to supports more insects and seeds to retain beneficial birds.

For a helpful summary, including charts showing various bird species’ nest types and preferred forage, the 62-page publication, “Supporting Beneficial Birds and Managing Pest Birds” is available for $10 from www.WildFarmAlliance.org or by calling 831-761-8408.

The webinar described herein may also be viewed at https://www.youtube.com/watch?v=oR414sXrnwY:

YORK, Pa. — As farmers mow hayfields from spring through late summer, a silent companion often accompanies them on their rounds. Keeping close…