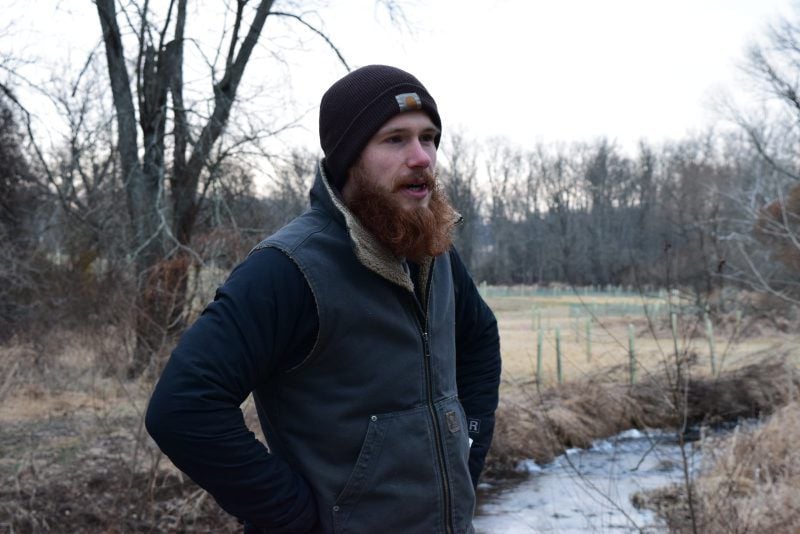 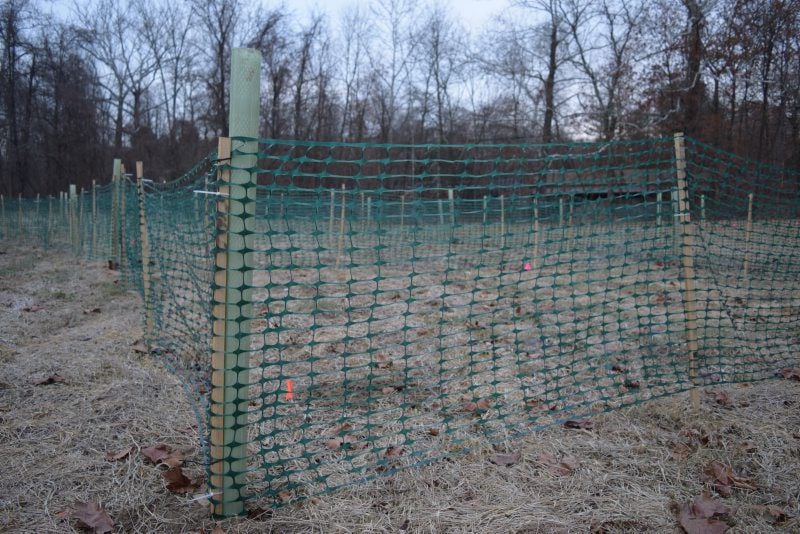 In order to deter deer from munching on the new plantings, Unruh experiments with fencing--creating smaller sections around the winterberry plants. While the deer could easily jump the 4 foot fence, his theory is that the deer feel threatened by being in smaller confines and will therefore decide to forage elsewhere. 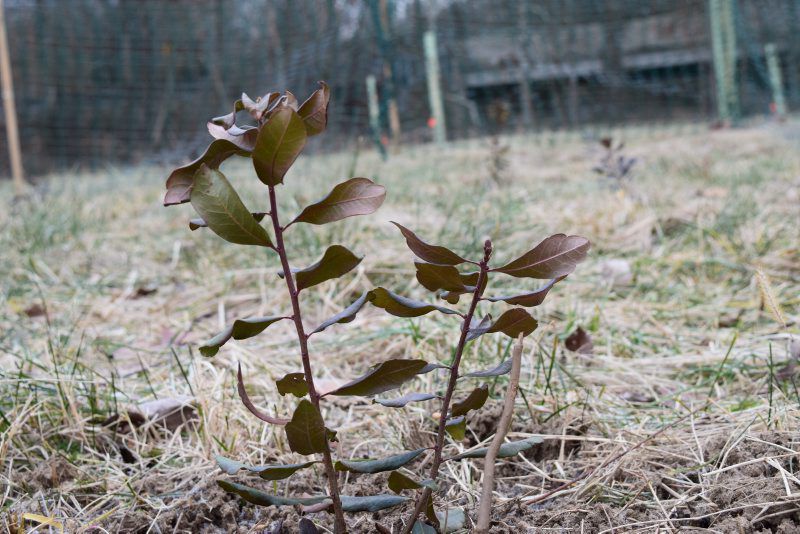 Bayberry is one of several productiuon plants in the buffer, along with elderberry and winterberry.

In order to deter deer from munching on the new plantings, Unruh experiments with fencing--creating smaller sections around the winterberry plants. While the deer could easily jump the 4 foot fence, his theory is that the deer feel threatened by being in smaller confines and will therefore decide to forage elsewhere.

Bayberry is one of several productiuon plants in the buffer, along with elderberry and winterberry.

Forested strips improve the ecosystem along stream banks, but until recently, planting a buffer meant taking land out of production.

Two years ago, Pennsylvania started encouraging people to plant riparian areas with crops like berries and nuts that can be harvested without disturbing the soil.

That got Austin Unruh excited.

The Morgantown resident was working on an online master’s degree in agroforestry through the University of Missouri, so he had already been thinking about ways to use trees to combine conservation and commercial production.

Now he saw a business opportunity.

“I can help (landowners) figure out what a buffer that suits their goals looks like,” he said.

The appeal of river bottom ground for crop farming has long been obvious. It’s got deep soil, nutrients and plentiful water.

But planting corn right up to the stream bank isn’t a great idea. Perennial plants like trees and shrubs trap nutrient runoff, slow erosion and give needed shade to aquatic life.

Some of these plants, like elderberry, pawpaw and persimmon, produce fruit for the niche food market.

And sprigs of willow, dogwood and winterberry can be sold for floral arrangements.

With these benefits in mind, the Pennsylvania Department of Conservation and Natural Resources wants to add 95,000 acres of riparian buffers by 2025 in the state’s section of the Chesapeake Bay watershed.

The initiative is part of a broader plan to get Pennsylvania back on track with its bay cleanup commitments.

The state bills income-producing buffers as a flexible alternative to USDA’s funding streams like the Conservation Reserve Enhancement Program.

Under CREP, farmers are paid to take their land out of production, so if they plant berry bushes, they can’t sell the fruit.

Even before the state program, landowners could grow crops in buffers they funded strictly with their own money, but that’s uncommon.

Unfortunately, if there’s nothing to harvest in the buffer, maintenance often takes a back seat to other farm tasks.

Many farmers see buffers as merely “something the government does on my land,” so they may not catch a gully forming or a tree leaning while the problems are still easily fixed, Unruh said.

Growing crops could give landowners an incentive to spend more time in their buffers.

As a consultant, Unruh works with landowners to understand their goals for the land and determine which funding sources would be best for them.

Income-producing buffers have proved popular, for example, with large farming families who want to intensify production on their land.

Other landowners want to create deer habitat for hunting or wildlife watching. For them, Unruh maps out plantings that provide places for whitetails to feed, bed and travel.

In other cases, landowners simply want to improve the aesthetics of the property.

“Some of my favorite plants are really colorful during the off-season,” Unruh said.

In addition to navigating the funding programs for his clients, Unruh plants the trees and does the upkeep.

Buffers generally need three or four years of mowing and herbicide spraying to give the trees a jump start.

This fall, Unruh planted a 4-acre demonstration buffer at Lundale Farm, a nonprofit organization that leases land to producers in northern Chester County.

The plot was funded by a Department of Conservation and Natural Resources grant administered by Stroud Water Research Center.

It includes plenty of fruiting plants and floral-trade woody shrubs, plus other tree species for diversity.

“They’re all pretty hardy. Most of them are native, and they just want to thrive,” Unruh said.

The Lundale buffer varies in width from about 20 feet near roads and fences to 180 feet in less confined areas.

As it happens, the buffer abuts French Creek — a tributary of the Delaware River, not the Chesapeake Bay — but Unruh still hopes the planting will show the possibilities of an income-producing buffer.

Granted, the crops he’s growing don’t have easy or obvious markets. A farmer can’t just truck a load of elderberries to the nearest grain elevator.

Fortunately, a buffer’s bounty lends itself to buy-local and sustainably-grown marketing, and Unruh has been spending a lot of his time networking with potential customers.

He hopes the buffers will eventually be able to produce more income per acre than cattle grazing.

“Because they’re not commodity crops, there’s no set ceiling to the price,” he said.

Less than a year after starting his business, Unruh is finding plenty of interest in his services.

He’s already consulting at almost a full-time level, and business continues to grow.

“It will take all the time I can give to it,” he said.

Watch a video of Austin Unruh at the Lundale Farm buffer: