Photo provided by Christopher Hauer These little brown bats are hibernating in a cave. Their close clustering facilitates the spread of white-nose syndrome, which has decreased their numbers by more than 90 percent in recent years. 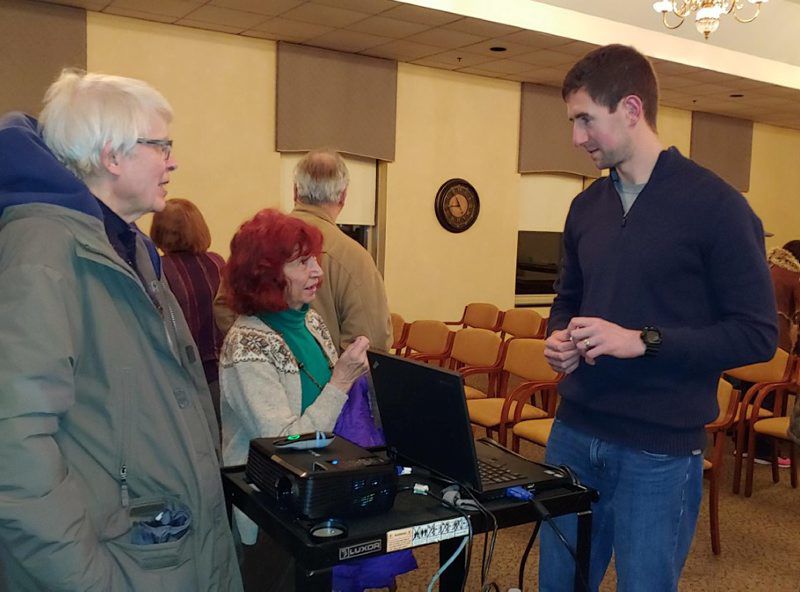 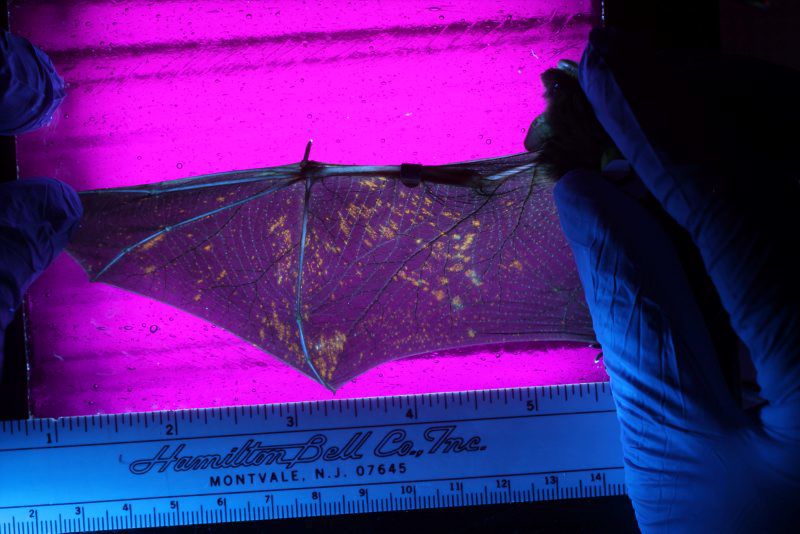 Photo provided by Christopher Hauer Ultraviolet light discloses the yellow-orange fluorescent spots caused by white-nose syndrome fungus on the wing membranes of a little brown bat, once the most common bat species in Pennsylvania and the northeast United States.

Photo provided by Christopher Hauer These little brown bats are hibernating in a cave. Their close clustering facilitates the spread of white-nose syndrome, which has decreased their numbers by more than 90 percent in recent years.

Photo provided by Christopher Hauer Ultraviolet light discloses the yellow-orange fluorescent spots caused by white-nose syndrome fungus on the wing membranes of a little brown bat, once the most common bat species in Pennsylvania and the northeast United States.

Hauer, a wildlife biologist for the Pennsylvania Department of Military and Veterans Affairs at Fort Indiantown Gap in northern Lebanon County, is a superhero for Pennsylvania’s waning bat population. He recently gave a presentation, “Conservation of Pennsylvania’s Bats in a Time of Crisis,” for the Annville-based Quittapahilla Audubon Society.

Pennsylvania is home to nine resident species of bats, all of which are nocturnal insect-eating mammals that typically emerge around dusk. As Hauer explained, unfortunately most of them are currently listed by state and/or federal authorities as endangered species, threatened species or species of concern. This is because, since 2009-2010, all six of the state’s cave-hibernating bat species have experienced a sudden drop in their numbers. The swift decline of several species, like the little brown bat, tri-colored bat and Northern long-eared bat, is a loss of more than 90% of their populations.

While bats have traditionally gotten a bad reputation as scary Halloween creatures and unwanted attic occupants, Hauer pointed out they actually play useful roles in our environment. Bat diets include pest insects that cause forest and agricultural damage, as well as insects that serve as vectors of human disease. He cited studies that found that bats alone save the agricultural industry several billion dollars annually by not having to spray pesticides, which could then potentially pollute waterways.

Other lesser-known functions of bats are their roles in pollination and seed spreading.

Among factors contributing to the depletion of bat populations, Hauer listed loss of roosting and foraging habitat, pesticides and other environmental toxins, as well as climate change, which has shifted bats northward along with the insects they feed on.

Statistics show that more than 500,000 bats are killed in North America annually by wind turbines, 75% of which are migratory tree bats in August and September, Hauer said.

One theory behind these fatalities is that wind farms are placed atop ridges, and linear ridges are the means bats and birds use to navigate.

It’s not just wind turbine blades, though. According to the Sierra Club, bats and birds in North America are also killed in collisions with many human-created impacts, from “communications towers (6.5 million); power lines (25 million); windows (300 million); and cats (1.4 to 3.7 billion).” The American Bird Conservancy website states that it advocates “for wind turbines and associated power lines and towers to be placed in areas that minimize impacts on federally protected birds.” Sierra Club’s website also mentions efforts to design blade-free wind turbines to reduce harm to bird and bat populations, for instance.

Several other mitigation strategies for helping avoid wind turbine-caused bat mortality were described by Hauer. Bats don’t like flying in windy conditions, and insects also prefer calm nights; thus, increasing cut-in speeds for wind turbines can lessen bat mortality by 50 to 75%. Acoustic deterrents to bats, as well as using textured surfaces on turbine blades to make them more distinguishable to bats, are also being explored.

Hauer named the top factor in destroying bat populations as Pseudogymnoascus destructans, better known as white-nose syndrome, or “WNS” for short. WNS is a fungus of European-Asian origin that grows in conditions between 12 to 15 degrees Centigrade in 90% or greater humidity.

The fungus has already taken a toll on 12 of North America’s 47 bat species. These 12 are among the 50% of bats that hibernate in caves, mines and tunnels, where conditions are conducive for the fungus to thrive.

The syndrome gets its name from the white fuzzy fungus growing on affected bats’ noses, but Hauer said WNS is primarily focused on wing membranes, where it melts the skin away.

WNS was first introduced to the United States at Howe’s Cave in New York during the winter of 2006-2007, apparently related to a cavers convention held there. It is believed that some European cavers had failed to clean their equipment prior to arriving and inadvertently imported the fungus.

Hauer said that there are two dozen bat species in Eurasia which apparently have evolved to have immunity to WNS and thus experience no mortality.

According to Hauer, WNS was first detected in Pennsylvania in the 2008-2009 winter, but spread statewide by 2012. In addition to affecting wing membranes, WNS also erodes the skin membranes of a bat’s muzzle and ears. Nevertheless, it is starvation, rather than the skin lesions themselves, which leads to bat deaths.

Bats typically hibernate from November through April, during which time they experience short awakening periods for a few hours every several weeks. Hauer said that bats usually expend 80 to 90% of their physical reserves during hibernation; however, WNS-afflicted bats rouse from their torpor every few days, resulting in premature fat depletion from their bodies. This leads them to awaken early from hibernation to eat. Unfortunately, wintertime conditions mean there are no insects to feed upon and the bats die from lack of nutrition.

Hauer presented mortality numbers attributed to WNS-caused quick declines in bat populations. In 2008, the bat count inside the Glen Lyon coal mine in Luzerne County was 1,539; by 2012, the bat census there was just 81. Likewise, in Bucks County’s Durham Mine, 10,794 bats were counted prior to WNS, but only 180 bats remained in 2011. Woodward Cave in Centre County saw its bat population decrease from 3,982 to 28 in 2011; however, by 2019, that number had rebounded to 550. Hauer said there is uncertainty about whether the bat population is regenerating, or if more bats just happen to be congregating in one location.

Hauer said that current WNS treatment efforts include the use of various anti-fungal biological agents, which work well in labs, but aren’t always practical to apply in natural settings. Vaccines may be effective, but are difficult to administer, he noted. Gene manipulation is being explored, as is the use of ultraviolet light, such as that used to sanitize hospital settings. Habitat modification and enhancement is another possibility, in an attempt to keep bats “fat and healthy” going into hibernation.

Hauer said that most of these possibilities are still in trial stages.

WNS has spread from the Eastern seaboard and Appalachians westward, with cases reported in Washington state and northeast California, while the Midwest still remains largely unaffected. Improved decontamination protocols while handling bats and gating entrances of hibernacula locations to fence out humans, while allowing access to bats, are among the efforts to limit the spread of WNS, but Hauer noted the best approach involves public education and outreach.

Hauer also talked about the habits of bats. For instance, bats hibernate at the same place annually, with the males arriving first, then mating with the females prior to hibernation. The females experience delayed fertilization until exiting hibernation in spring. Most species produce one pup, or baby bat, per year, which is born following a 90-day gestation period. Pups experience rapid growth and are able to fly in three to four weeks.

The average lifespan of a bat without WNS is between five and 10 years, said Hauer, but he noted that some little brown bats have lived almost 40 years. He added that, since bats tend to return to the same habitats year after year, if you have bats in your home, barn or elsewhere, you can expect them to become permanent guests. Fortunately, they will help keep your insect pest population down, help with crop pollination and provide other benefits.

For more information, Christopher Hauer may be reached at chauer@pa.gov or by calling 717-861-9715.