Barn owls do their best work while humans are asleep, but Clair Kauffman doesn’t want these stealthy farmland hunters to be overlooked.

About 150 adults and children watched as wildlife biologists slipped tracking bands onto the young birds.

To start the process, Dan Mummert, a wildlife diversity biologist for the Pennsylvania Game Commission, removed three hissing nestlings from a nesting box high up in one of Kauffman’s barns.

Mummert placed the babies in cloth bags to quiet them down before banding. Though small now, the owlets could grow to be a foot tall and have a wingspan of 4 feet.

“Barn owls look and sound formidable at maturity,” Mummert told his audience while he calmed an excited, vocal bird.

Barn owls are also expert hunters, noiselessly plucking voles and other pesky rodents from hay fields and pastures under cover of darkness.

Margaret Brittingham, a Penn State professor of wildlife resources, said farms provide valuable habitat to barn owls and American kestrels —another prolific vole killer — and farmers should be glad to share their land with these birds of prey.

“They truly are the farmers’ friends and an important part of our ecosystem,” she said.

Despite their nocturnal prowess, barn owls are in decline in southeastern Pennsylvania.

Their population has fallen by half since the 1980s, Mummert said, as housing developments and conversion to row crops have diminished the large grassy fields the birds need to hunt.

In an attempt to reverse the species’ fortunes, the Game Commission is working with farmers and landowners to provide habitat and allow access for banding. Over the past 15 years, the agency has tagged more than 1,500 barn owls and recovered at least 110 banded birds that had died.

The bands will contribute to scientists’ understanding of how long barn owls live, how far they roam from their home farms, and why they die.

Mummert and Mercy Melo, a field technician from Hawk Mountain Sanctuary in Berks County, banded three barn owl and three kestrel nestlings during the event at the farm.

Nesting boxes, like the one mounted high in Kauffman’s barn, are another part of the strategy to aid the birds.

Kauffman hosts barn owl boxes in two of his barns and nine kestrel boxes throughout his 100-acre orchard.

For Kauffman, fostering raptor habitat is not just an environmental pastime. It’s also part of his integrated pest management program for the orchard. 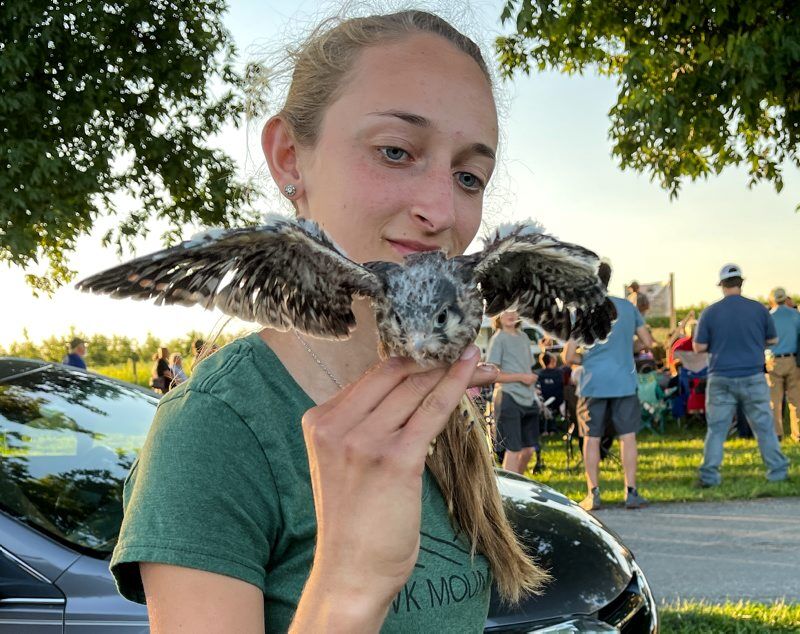 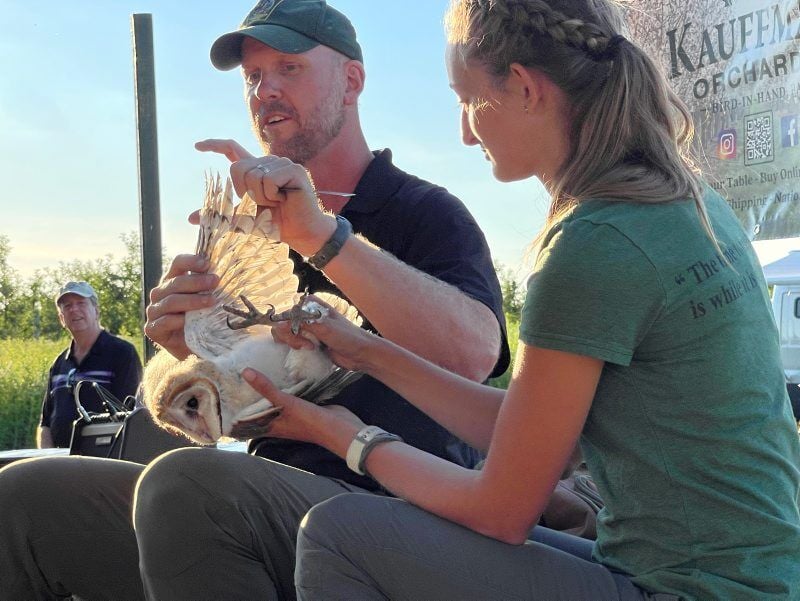 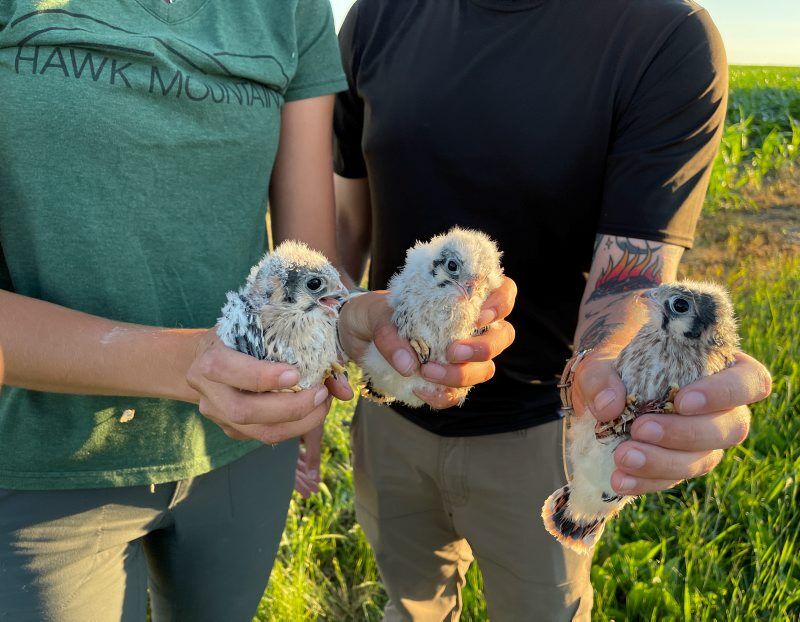 Three American Kestrel chicks removed from a kestrel box for banding at the Kauffman Fruit Farm. 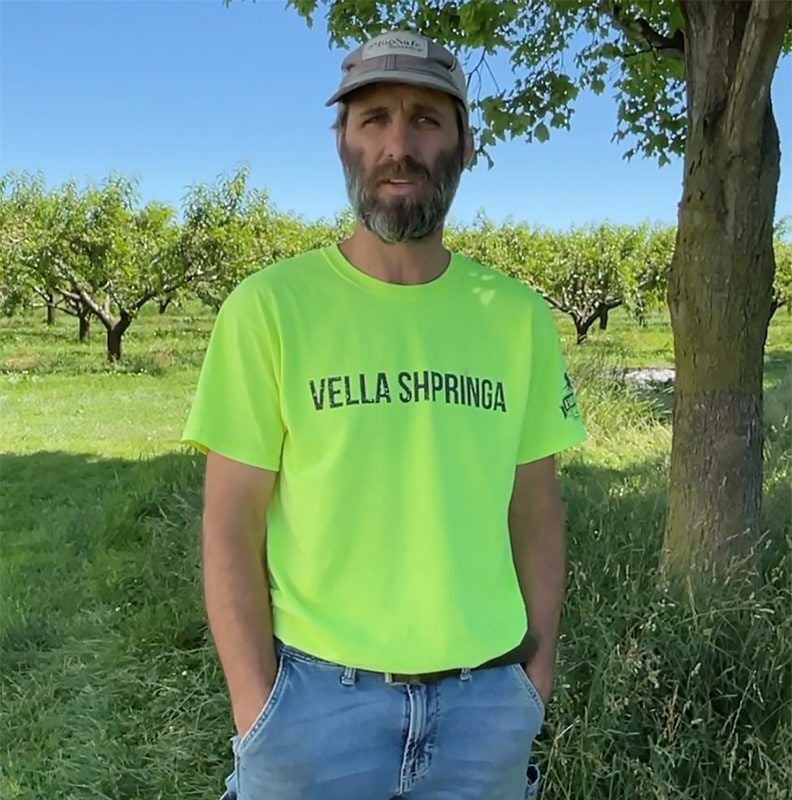 Clair Kauffman is the orchard manager at Kauffman Fruit Farm in Ronks, Pa. 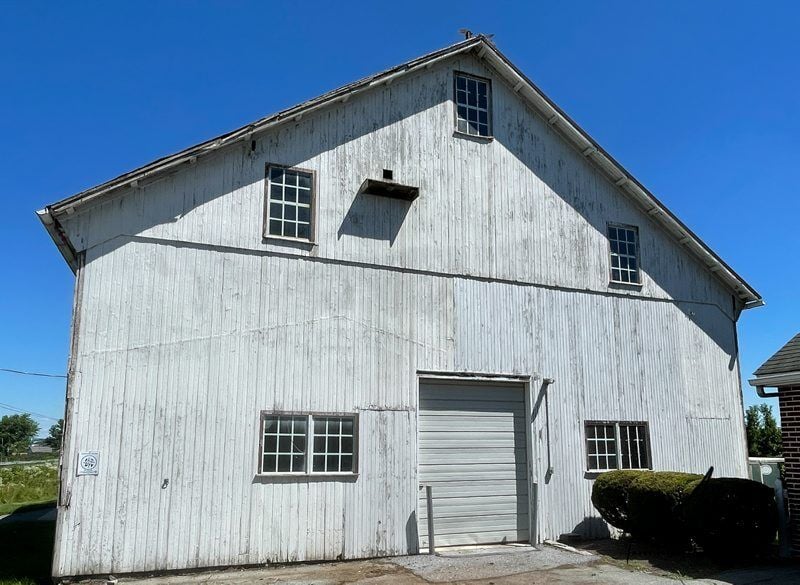 The entrance to a barn owl nesting box is high above the ground in a barn at Kauffman Fruit Farm.

Three American Kestrel chicks removed from a kestrel box for banding at the Kauffman Fruit Farm.

Clair Kauffman is the orchard manager at Kauffman Fruit Farm in Ronks, Pa.

The entrance to a barn owl nesting box is high above the ground in a barn at Kauffman Fruit Farm.

“It’s a balancing act as we try to reach equilibrium between pest species and beneficial allies,” he said. “Our owls and kestrels play an important role in keeping voles under control.”

Meadow voles, which eat bark off the trees, have wreaked havoc in the orchard for years. They can girdle the trees — strip the bark the whole way around the trunk — which dooms the plant.

Recently, Kauffman has also seen increased activity from pine voles, which dig into the soil and eat roots. Again, this voracious nibbling can kill a tree.

Such tree deaths can cost the orchard money for years or even decades.

“You might think we could just remove the dead tree and replace it with a smaller, immature tree. That is costly and doesn’t work well,” Kauffman said. “Spaces where dead trees are removed will remain until a new orchard is planted there maybe every 25 years.”

Barn owls and kestrels are well equipped to catch the orchard vandals.

Specialized feathers allow barn owls to fly slowly and silently across fields. Their exceptional hearing — powered by left and right ears that are not symmetrical to each other — detect prey that is hiding in the grass or under snow.

To help the barn owls, Kauffman cuts the grass in the orchard before the winter snow arrives, reducing the voles’ ability to hide.

Each barn owl may consume three voles a day, and a family with five nestlings could consume 2,500 a year.

New York state officials are enlisting farmers’ help to combat gypsy moths, which have hit the northeast corner of the state.

Corn growers need to be on the lookout for corn earworm—they often arrive in mid-summer, but producers should start enacting their management plan early.