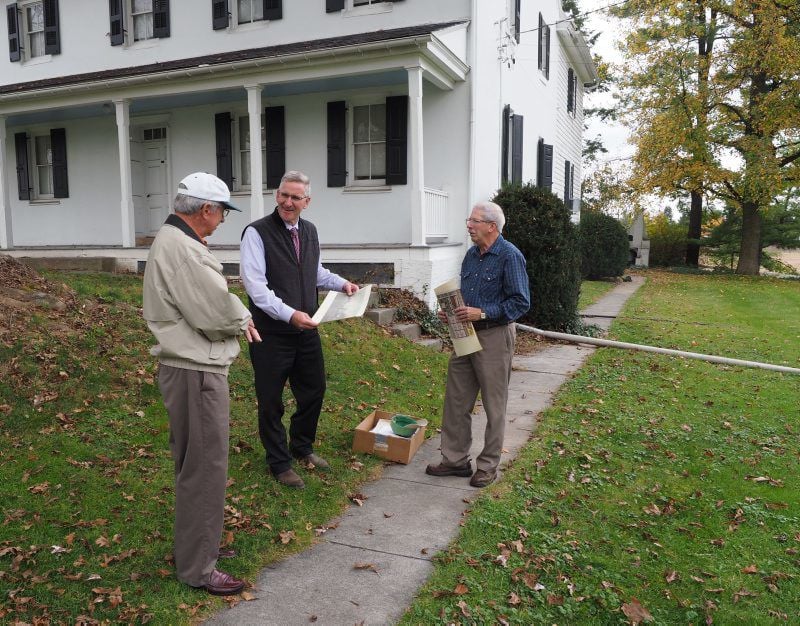 Photo by Dick Wanner Pennsylvania Secretary of Agriculture Russell Redding, left, looks through some of the history of the state's first-to-be-recognized tricentennial family farm. The Lancaster County farm's current owners are Marlin Miller, wearing a cap, and his brother Robert. 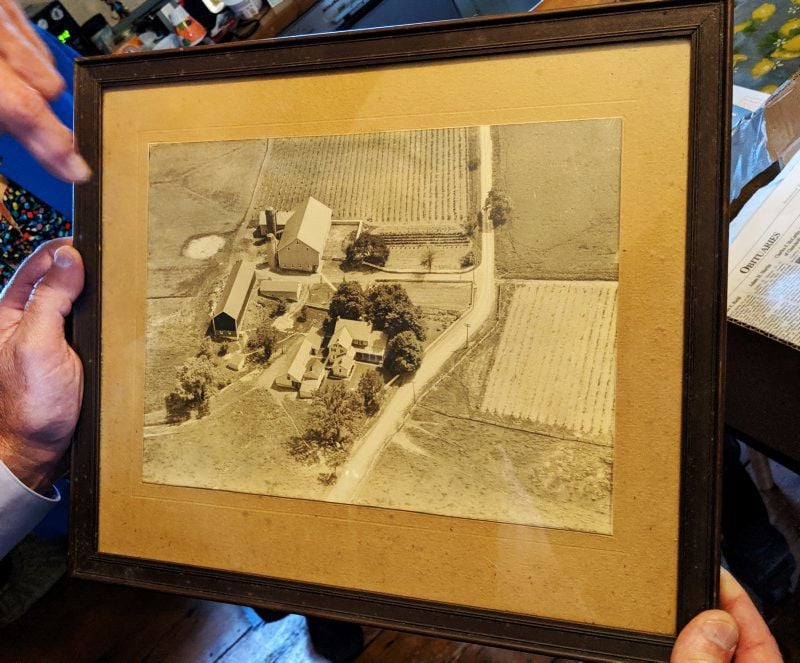 Photo courtesy of Milton and Robert Miller The Miller family farm has seen a lot of changes in its three centuries of existence. Now devoted to hay and soybean production, this early aerial photo shows it at a time when grape vines, seen in the upper center, were one of the crop mainstays. 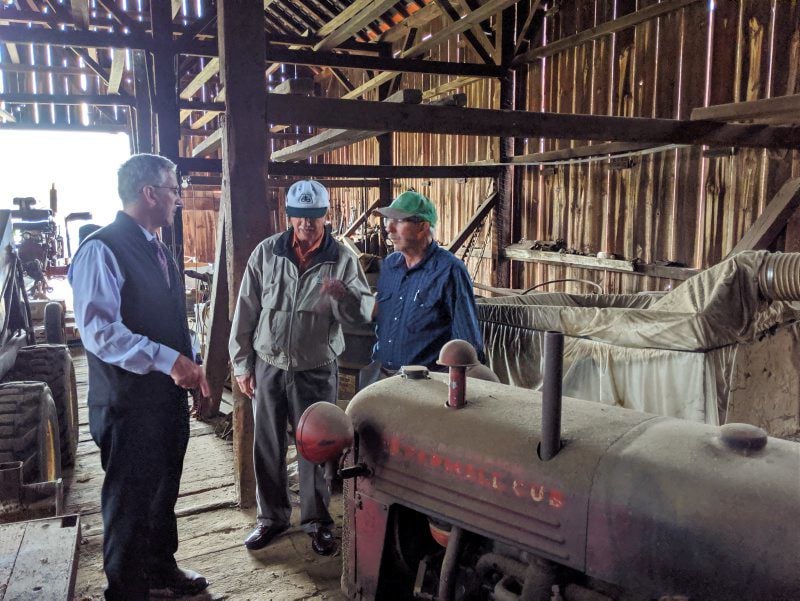 Photo by Dick Wanner Pennsylvania Secretary of Agriculture Russell Redding visited Milton, center, and Robert Miller to tour their tricentennial farm. The 63-acre farm in Lancaster County is so far the only farm to be recognized for a full three centuries of ownership by the same family. 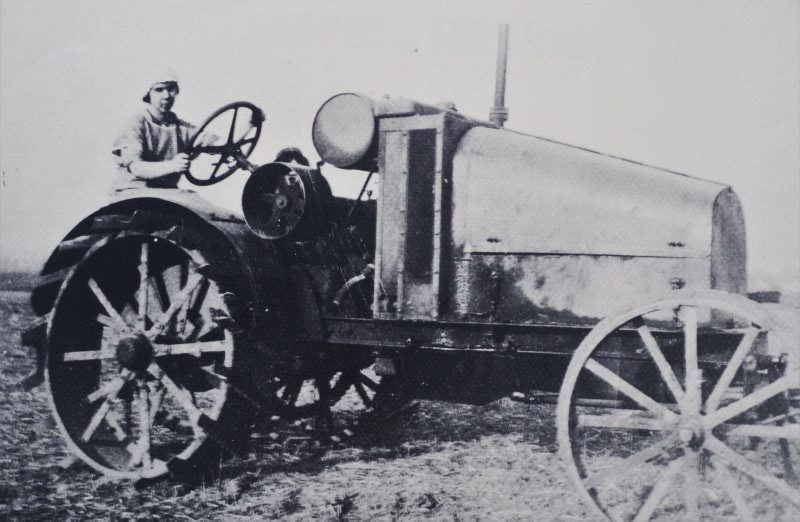 Photo courtesy of Milton and Robert Miller Tracy, whose name has been forgotten, began on the Miller family farm shortly before Milton was born. She was quite handy with this 1935 Concord tractor. 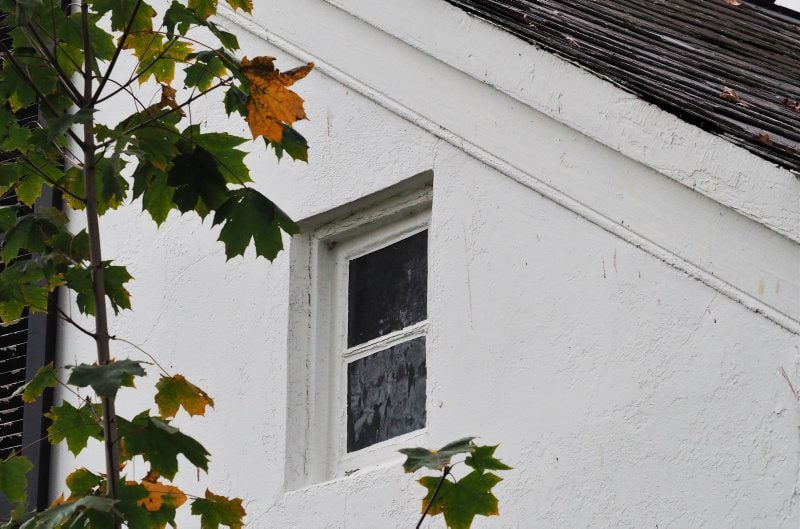 Photo by Dick Wanner This is a "spirit" window on the third floor of a house that may have been built in the 1700s. It is attached to a larger house which was built in 1810. In Colonial America, departed family members lay in mourning for a period of time, and after the third day, it was believed the person's spirit needed to fly out a window. Thus, one was provided. 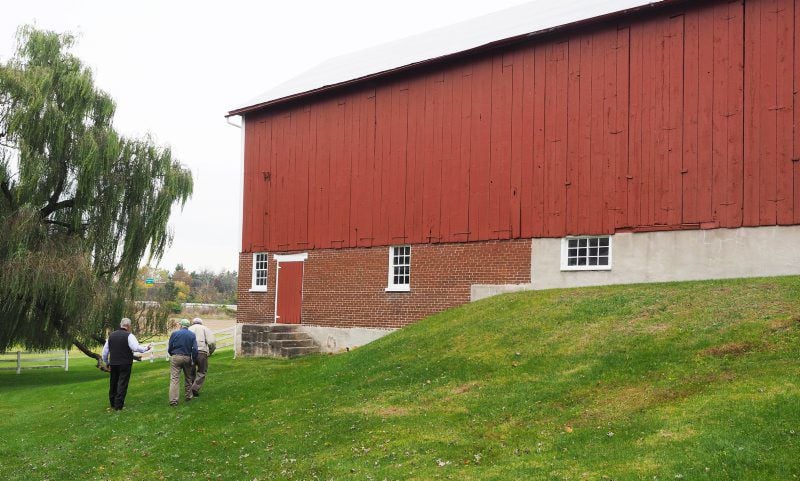 Photo by Dick Wanner Pennsylvania Secretary of Agriculture Russell Redding, left, and Robert, center, and Milton Miller head toward the tobacco barn on the Millers' tricentennial family farm. The barn is big enough to hold the 30 acres of tobacco once grown on the farm. Like the rest of the buildings and the grounds, it is meticulously maintained.

Google aerial photo The circle in this part of Lancaster County shows a 63-acre tract of farmland, the only parcel to remain of a 700 acres purchased from an agent of William Penn in 1717 by Hans Brubaker, a German settler. The X marks the spot of open fields when the photo was taken a few years ago. That 80 acres is now the Crossings development just outside Lancaster's city limits.

LANCASTER, Pa. — Cars, trucks and buses whizzed by on Route 30, just north of downtown Lancaster. It was about four in the afternoon, and there was also a steady stream of cars on Farmingdale Road, a popular but once little-known shortcut between some of the city’s most heavily traveled thoroughfares.

Farmingdale Road bisects a 63-acre farm that’s owned by brothers Robert and Marlin Miller. The Millers’ land and an adjoining property are the only remnants of a landscape that once justified the “Farmingdale” label.

It was late afternoon on Wednesday, Oct. 30, and Pennsylvania Secretary of Agriculture Russell Redding had stopped to visit the Millers on his way to the annual dinner meeting of the Lancaster Farmland Trust. The trust has been a key partner with the county and state in obtaining perpetual conservation easements on more than a thousand farms and well over 100,000 acres of the county’s most productive soils.

Standing in the front yard of the Miller ancestral home, Redding looked north to the Route 30 traffic, then west to a development across Farmingdale Road. In that sweep, his gaze took in raw land which, in the right hands — or the wrong hands, depending on your point of view — could be worth millions of dollars.

“How do you value that?” we asked. “How do you begin to figure out the cost of preserving it?”

“I wouldn’t know where to begin,” he said.

The issue is not just the Miller farmland, it is also the history of the place. The brothers are the direct descendants of Hans Brubaker, a German settler who bought the property from an agent for William Penn. The bothers are the ninth generation of their family to own and live on this land.

Brubaker bought 700 acres in 1717, in what is now East Hempfield Township, for about 49 cents an acre, or approximately $350. Experimenting with a variety of online inflation calculators, that would come out to about $3,500 an acre in today’s dollars. Not a bad deal today, actually, for Lancaster farmland intended for agriculture, but it’s unrealistic. According to Jeb Musser, deputy director of the Lancaster Farmland Trust, farmer-to-farmer land sales in the county go for $20,000 to $25,000 per acre.

That doesn’t compare to the nearly $90,000 per acre the High Real Estate Group paid three years ago for 80 acres of farmland which is literally in the Millers’ backyard. It is home today of the Crossings development off Harrisburg Pike. High filled the land with a hotel, apartment buildings, retail shops, a Wegman’s grocery store and all the concrete and asphalt those uses require.

We the people would also give up the ability to collect taxes on the land’s highest use value, “highest use” again depending on your point of view. Farmland taxed as farmland is taxed at a much lower rate than developed land. That lower tax rate is a permanent covenant between government and the farmland owners, whoever they may be now or decades or a century or two in the future.

Pennsylvania, and Lancaster County in particular, has done a model job of farmland preservation. “We have 550,000 preserved acres throughout the state,” Redding said. “That’s a testament to how much we value farmland.”

A lot of sentiment and a lot of dollars have been lavished on the state’s preservation efforts. The dollars can be measured, but the sentiment can’t. The Millers’ 300-year family history may be huge in the family’s hearts, but it will never register in anybody’s bank account.

Not that it seems to matter.

The brothers are a couple of down-to-earth retired guys who have embraced their role as custodians of their family’s history, and curators of the well-maintained buildings and the artifacts they contain. They grew up on the farm, and Robert still lives in the 13-room farmhouse, which bears an 1810 cornerstone. Marlin, retired from a division of Tyson Foods in New Holland, lives a mile or two away, but keeps his collection of antique tractors at the farm.

The family has produced many crops over the years, from corn and wheat to grapes, celery and tobacco. For a quarter-century, Marlin and his late wife grew an acre of strawberries. They sold berries in the spring and pumpkins in the fall, using a tobacco wagon as a self-service stand. That business ended about 20 years ago because of pumpkin thieves, Marlin said.

Today the farm is a no-till soybean and hay operation. The brothers hire custom operators to do most of the fieldwork, but they maintain control of seed selection, management decisions and crop marketing.

Brubakers owned the original land and also the various parcels sold off, inherited by, or gifted to other generations of Brubakers until Abraham Brubaker’s daughter, Elizabeth, married Tobias Miller. On April 2, 1832, Tobias and Elizabeth bought Abraham’s land. All the owners since then have shared the Miller family name.

The brothers were obviously more connected to the family memories and the historic (rather than the market) value of their farmland. They are enrolled in the state’s Clean and Green program, which gives farms a property tax break and encourages keeping land in agriculture.

The Miller brothers are in no rush to cash in on the sale of their development rights and they may never do so. They are waiting patiently, because they are patient men, to see if Marlin’s grandchildren may one day want to take over the farm.

“We’ll see what happens in the future,” he said. “You never know.”