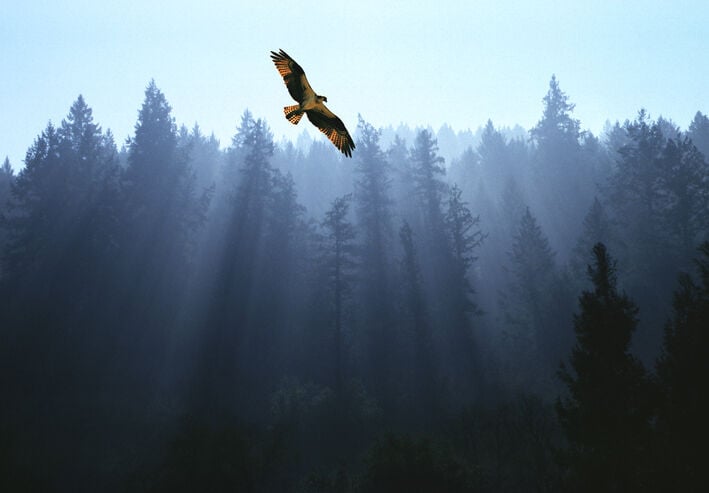 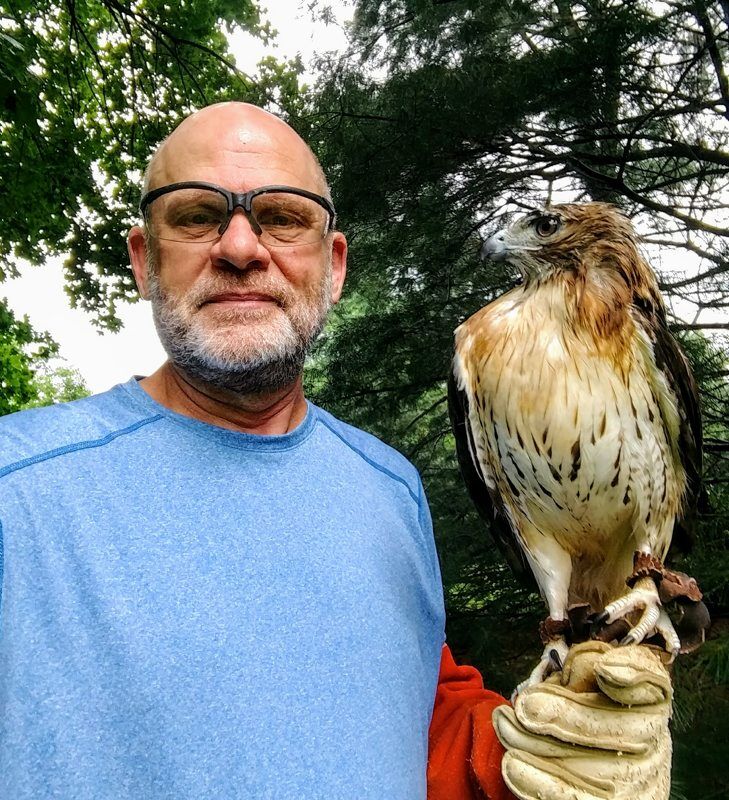 Unable to hunt, Little Guy would starve if released. The fierce-looking "educator" hawk never fails to be a hit with Mark Kocher's audiences. 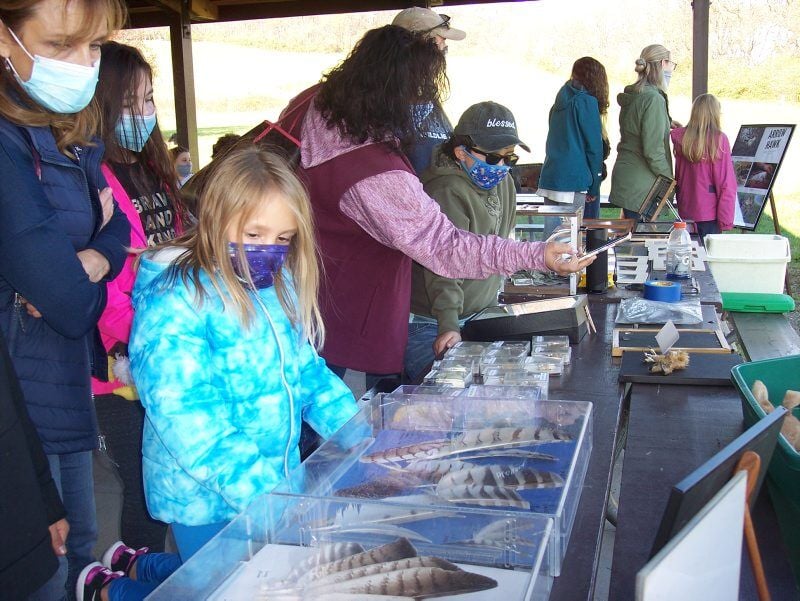 Attendees at the York County Parks birds of prey program were able to study Mark Kocher's display of feathers, eggs, pellets and photos of various species of raptors. 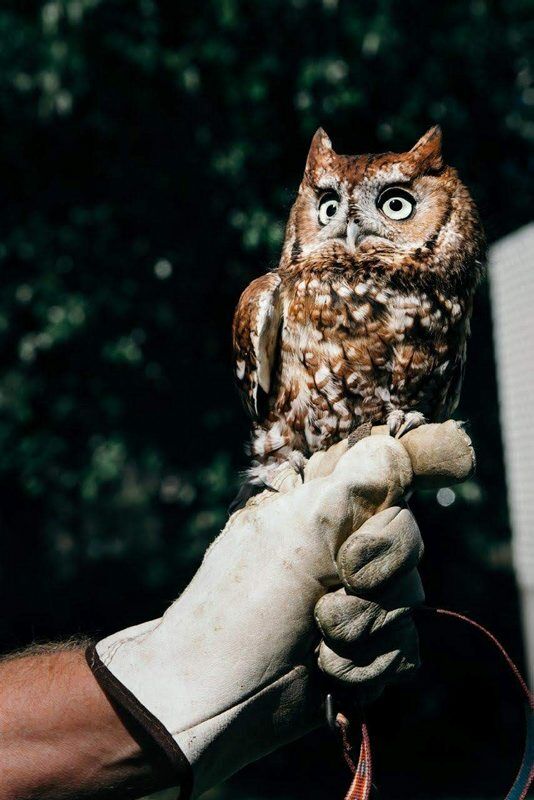 The diminutive screech owls are common to the area, belting out a hair-raising screech that belies their small size.

YORK, Pa. — As farmers mow hayfields from spring through late summer, a silent companion often accompanies them on their rounds. Keeping close vigil as they watchfully glide overhead, hawks scan newly-mown swaths for rodents. Suddenly, a cunning, sky-soaring predator swoops down and grabs a mouse, a mole, or maybe a young groundhog, snagging a tasty meal while providing free, valuable pest control for farmers’ fields.

“If the prey struggles, a bite to the head severs the spinal cord and ends the struggle,” said Mark Kocher during a recent birds of prey educational program he presented at York County’s Rudy Park.

Kocher is a volunteer with birds of prey rehabilitation efforts. For the past few decades, he’s assisted noted area licensed rehabilitator Mitzi Eaton, who is now retiring from working with the injured flying predators she’s cared for since 1988.

“I clean up poop, pick up injured birds, meet with people who rescue them, do cage repairs, pick up roadkill to help provide feed,” Kocher explained of some of his work with bird rehabilitation.

An entomology graduate of the University of Georgia, he added that he has a “bug degree,” and therefore isn’t “grossed out by maggots.”

Raptors are noted for their incredibly sharp eyesight.

“They have great vision, eight to nine times better than our human vision. They have ‘binocular’ vision and that gives raptors depth perception,” Kocher explained to a rapt audience of mostly families, including many children.

As he spoke, Kocher thrilled young and old alike with the close-up look at three injured birds of prey which have been rehabilitated under Eaton’s care: a red-tailed hawk, a barred owl and a screech owl.

All suffered injuries so significant they can never be released back to the wild, but have become valuable birds of prey education-outreach “team members.”

Hunting With Raptors Has Agricultural Benefits

History of Human Impact on Hawks and Other Flying Field Predators

Birds of prey were once considered despised enemies by many farmers, killers of the valuable poultry flocks on which early farm families often depended at least in part for income.

Before they were designated as protected, hawks were routinely shot.

And, with the introduction of the once widely used pest control chemical DDT, shells of predator species’ eggs often cracked before they could hatch, another critical factor which severely impacted the number of the beautiful, threatened, aerial hunters.

Banning the use of DDT and the passage of laws protecting hawks have increased their numbers to where the familiar aerial predators are now routinely seen hunting over most area farms.

According to Kocher, a large number of the birds of prey that are brought to rehabilitators for care have either tangled with vehicles or wires.

“About 60% of injuries to the birds are due to automobile impact; it’s the number one reason for injury,” Kocher said.

“When birds are focused on their targets, they are oblivious to vehicles.”

Other injuries come from impact with houses, young birds falling out of nests, shootings, tangling with overhead wires and, not uncommonly, in the mesh installations located on the growing number of outdoor soccer field nets.

“Birds are like people; they have good days and bad days,” he noted.

“Many of those injured are young birds, in their first year. Like teenagers, they have lots of accidents. Then they don’t eat well; they have poor hunting skills. Those that come in to rehabilitation as adults, they may have a lesser chance for release. They’ve reached the ‘bottom of the barrel.’”

Extremely common to the area are red-tailed hawks, large raptors with a rusty-hued tail and often seen gliding over farm fields.

“The amount of food available determines the population,” said Kocher. The diet of these large hawks includes mice, moles, snakes, chipmunks, rabbits, small groundhogs, with pigeons sometimes added to their menu, all familiar species on most regional farms.

Some, like groundhogs, can do considerable damage to fields, and not infrequently, to field equipment hitting their large burrow entrances.

In the wild, red-tailed hawks have an average lifespan of about 10 years. In captivity, usually due to injuries too extensive for the birds to ever hunt and care for themselves, they may live much longer, like one familiar to Kocher which lived 26 years.

Owls, although not commonly spotted during daylight hours, also provide a huge service to farmers with their insatiable appetite for mice.

With eyes quite large for the size of their bodies, their vision, even in the darkest night, is extremely keen. And their soft, very puffy feathers enable owls to fly with no sound that would alert potential rodent prey.

Carefully walking among the audience, Kocher displayed the “educator birds,” including a large barred owl the rehabilitators had dubbed Teddy #2. After being hit by a vehicle in 2012, the large owl suffered a severe concussion and eye damage, preventing him from ever being released to patrol fields for mice.

Instead, the majestic bird has become an integral part of the rehabilitators’ public outreach efforts.

Rehabilitating birds of prey is a costly endeavor, dependent largely on donations and, often, out of pocket for those dedicated to caring and rehabilitating. Kocher related that the program he’s worked with purchases up to 2,000 frozen mice at a time, in addition to road-killed prey picked up or made available by others.

Teddy #2, the barred owl, dines on three mice each day. Caring for the average 70 to 80 injured raptors per year, up to 175 last year and well over 100 through September of this year, is costly.

With the retirement of York County’s veteran rehabilitator Mitzi Eaton, Kocher hopes to find another area program where he can continue to assist in caring for injured birds and helping to educate the public about them.

“And the best part of all,” he said, “is taking rehabilitated birds out and releasing them back into the wild.”

It is illegal for unlicensed individuals to keep an injured bird or wild animal in an attempt to care for it.

If an injured bird or animal is discovered, finders in the southcentral region of the state can contact Raven Ridge Wildlife Center in Washington Boro, Lancaster County. Others should contact the Pennsylvania Game Commission.

Be Bird-Brainy: Know Your Beneficial Birds