Romulus Central School District is in Seneca County, which is among New York’s most rural counties. It may seem odd that Romulus had no agriculture teacher until recently; however, the addition of Jami Willard to the faculty will help students learn more about the many aspects of farming.

“There is so much they don’t know,” Willard said recently. “They may come from a dairy farm. Would they have interest in something they didn’t grow up doing?”

Willard, who also currently farms with her husband, spent her youth in nearby Interlaken, New York, helping on the farm of her grandfather, Albert Updike. He also operated Updike Trucking. Now, Willard’s father, Jim Noveck, operates both the farm and trucking business, now Jim Noveck Trucking.

The farm raises mostly crops and a small number of beef cattle. Willard helped with the cattle, and with growing and preserving produce on the farm. Updike passed away in 2011.

Willard’s various experiences on the farm have proved helpful for her occupation as an educator. In fact, Updike and Willard’s grandmother, Darlene Willard Brehm, encouraged her to pursue ag education as her career.

“I was able to learn so many things hands-on that many don’t get to experience,” Willard said. “I knew right away that I wanted to teach others the ropes and how to live off the land.”

Willard completed her bachelor’s degree in education at Ashford College and her master’s in agriculture education at State University of New York Oswego. 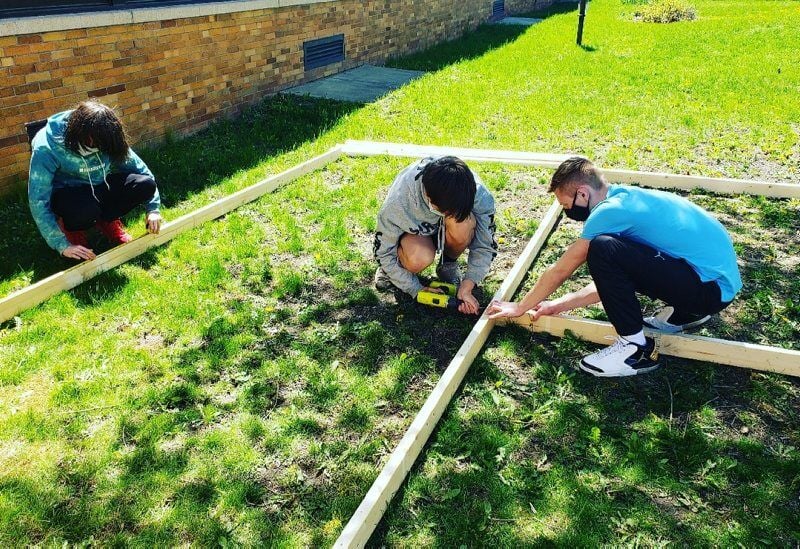 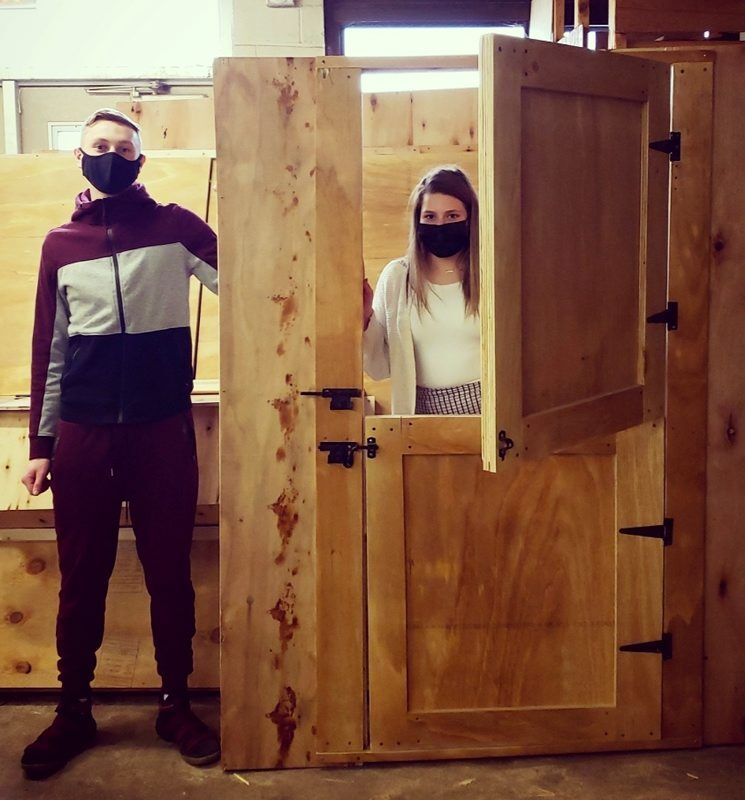 Building a chicken coop with the help of ag tech students, has been one of the department’s projects this year. 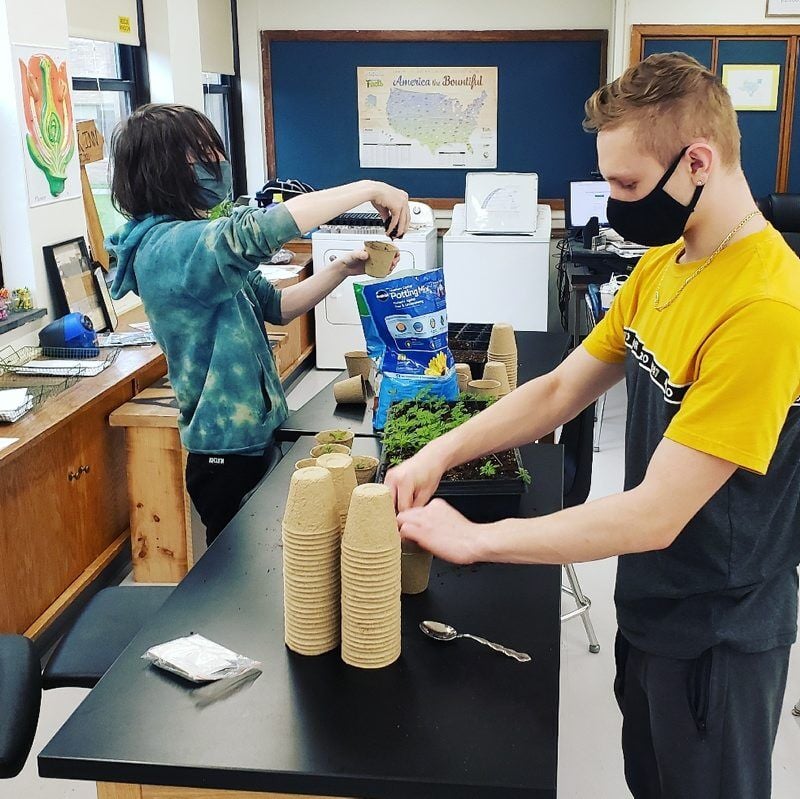 The ag students have learned better how to work together. 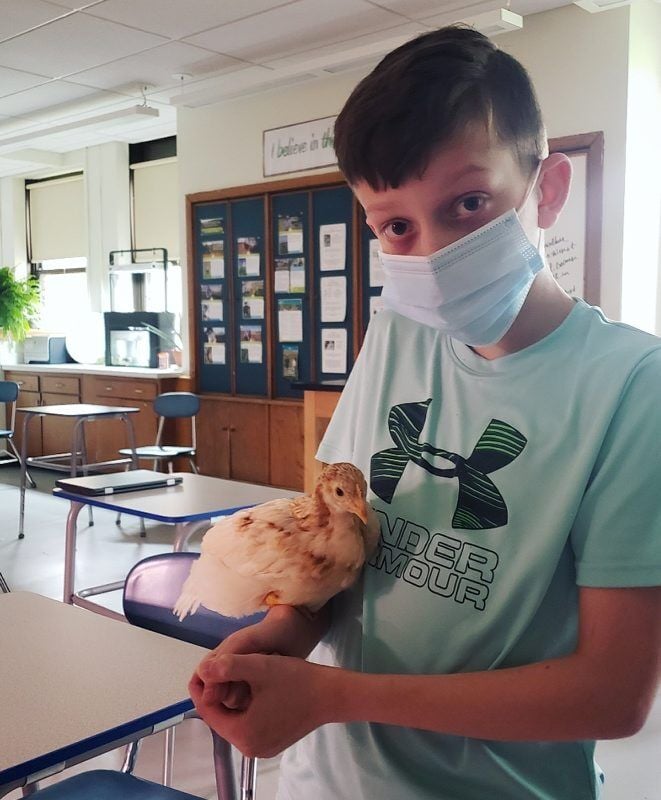 A student of Willard’s enjoys his chick hatching project. 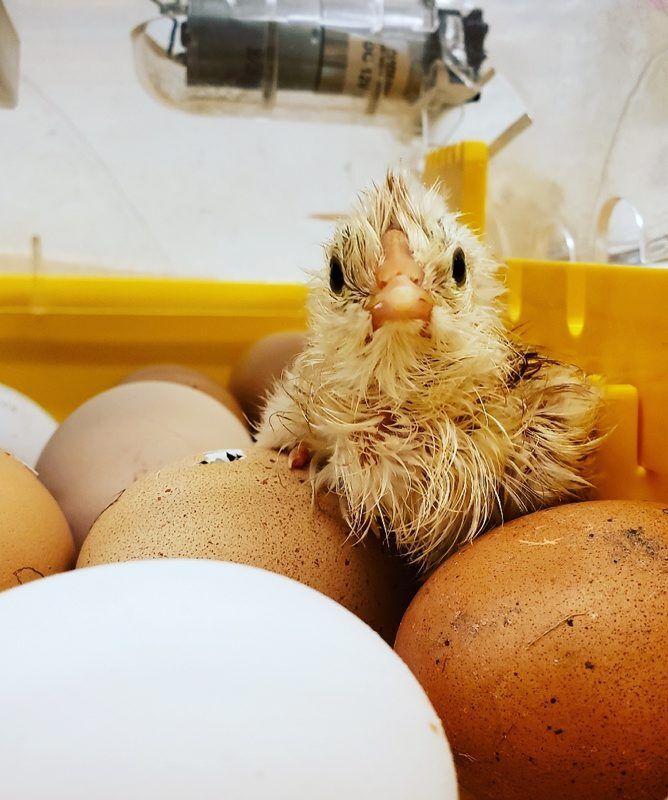 Hatching chicks has fostered a desire in students to raise chickens.

Building a chicken coop with the help of ag tech students, has been one of the department’s projects this year.

The ag students have learned better how to work together.

A student of Willard’s enjoys his chick hatching project.

Hatching chicks has fostered a desire in students to raise chickens.

“I didn’t have any ag credits before I went for my master’s,” she said. “I completed an occupational exam, so I had to complete a hands-on to show I knew how to stick weld, take soil samples (and) understand tractor safety. It was a well-rounded exam, equivalent to 30 credit hours in college.”

After graduation, she taught in Geneva, New York, for a year, but found that the students did not have much enthusiasm for agriculture. When Willard heard about the opportunity 15 miles away in Romulus, she felt that it would be a better fit for her.

Teaching the Many Facets of Farming

“I have always been passionate about agriculture, and I am very fortunate to have the opportunity to start a new ag program at Romulus CSD,” Willard said. “They have been so supportive with all of my ideas since the start of the school year and I have a great group of students, too. They are passionate and eager to learn hands-on. I am so glad I am able to provide students with these opportunities, and having fun doing it.”

She teaches ag tech and farm-to-table courses with 20 students between both classes. As more students become interested, she expects more to enroll next school year.

Because of the broad subject matter, the ag tech class is a survey class to make students aware of a few of the many facets of farming. The farm-to-table course is more about community awareness and the local economy.

Willard sits on the board for Seneca County Farm Bureau and represents New York State Farm Bureau for District 3.

Working with her colleagues at the school has helped Willard develop creative ways to engage students, such as building a chicken coop with the tech class.

In March, the students germinated vegetable and flower seeds in the classroom and planted them the third week of May in the raised bed on the school grounds. The class has also incubated and hatched chicks.

The ag students had a chick donation program on June 5. They incubated, hatched and raised chicks to donate to the local community.

“We had a student who was so new to ag and chickens,” Willard said. “His grandparents go to Florida during the winter. He was so excited to tell them about what we were doing in class. They got him a chicken coop and he was able to take chickens home that he hatched. It was one of the best things for him. He sent pictures to my work email of him with his chickens at home. A few other students have done similar things.”

Willard plans to build a tool shed with the ag tech students and complete barn quilts, which are plywood painted with colorful designs for decorating barns.

“Having hands-on projects for the students is big (deal),” Willard said. “I had a teacher come up to me and say that there’s been noticeable changes in work ethics and attitudes since I started the program. The students work together as a team and enjoy it. The teacher said I’ve been breaking barriers that have been hard for these students in the past. I’ve built so many great relationships with these students.”

Willard hopes to advise an FFA chapter in the school within the next two years.

She also continues farming along with her son, Robby, and daughter, Rhettlee, and her husband, Rob Thompson, on the farm of his father, Bob Thompson. It’s called Thompson Lakeview Farms, and has 1,400 acres where they raise crops, cattle and feeder hogs.

For 4-H Leader, the Future Is Looking Brighter

Skylar Peters, an Extension 4-H educator in Mifflin County, always knew she was interested in agribusiness, but her path to 4-H was full of unexpected turns.

Wyatt and Aubrey Mase will be the third generation of their family to exhibit livestock at the upcoming Lebanon Area Fair.

Students at the Milton Hershey School are able to learn about growing produce hydroponically while supplying local restaurants with fresh tomatoes, strawberries and more.

You could have easily mistaken the 61st annual Wheat Threshing, Steam and Gas Engine Show near Federalsburg for a bygone century.