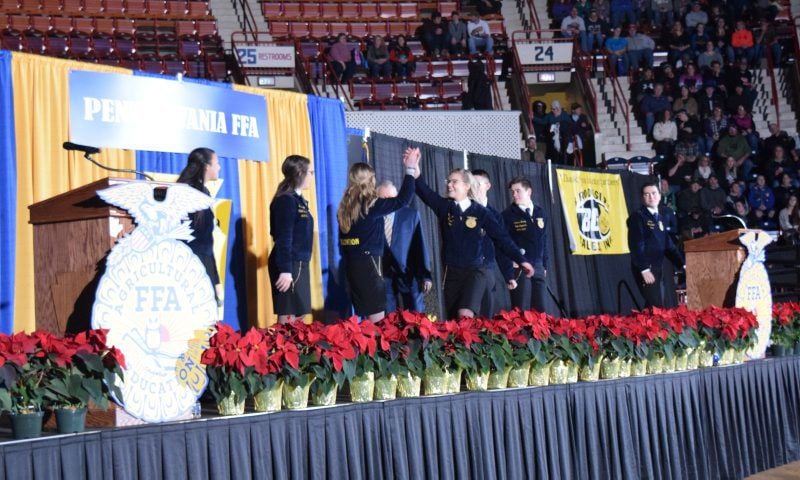 The state officer team danced their way on stage for the opening ceremony at Mid-Winter Convention. 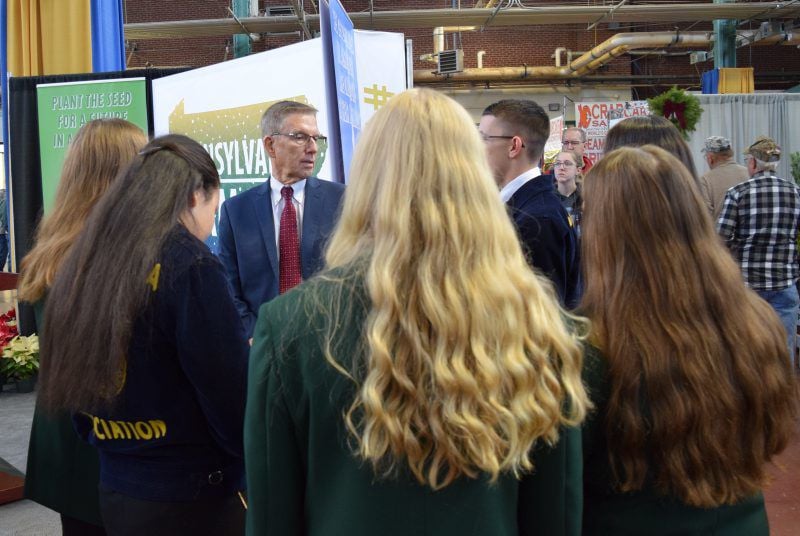 First-year FFA members wait to put on their blue jackets.

HARRISBURG, Pa. — When Arilyn Oatman first attended the Pennsylvania Farm Show as an FFA member, she was just getting her coveted blue jacket. Now, four years later as state sentinel, she’s ushering in a new group of first-year students.

“It just means so much to me,” she said before the big ceremony.

The Mid-Winter Convention, held Monday, Jan. 6, at the Pennsylvania Farm Show, is a gathering for both new members and those with more achievements under their belts — alumni, state stars and recipients of the Keystone degree, the highest award given at the state level.

These accomplishments all show how Pennsylvania FFA members can “Make Their Mark,” the motto of this year’s state officer team.

The team came up with a special way to symbolize its motto during the opening ceremonies.

Previous openers have included skits and pageants, and on one memorable occasion cited by the current officers, a horse-drawn carriage.

As hundreds of FFA students poured into the enormous New Holland Arena, they were given markers to literally make their mark.

In white highlighter on a black background, the first-year members signed one board and Keystone winners signed another. What started as two blank slates were quickly filled with names and chapters, a testimony to the huge number of FFA members in the state.

The state officers presented these signs during the opening ceremony.

“This sign can serve as a reminder of the power of your impact,” said President Timber Thebes.

The sign will be displayed at other FFA events, where more members will add their names to the long and proud list.

And it wasn’t just first-year members signing names. In some cases, it was first-year chapters.

The officer team from the newly chartered Montgomery chapter, of Montgomery Area High School, already had their jackets at the ready, but attending their first major FFA event was an eye-opening experience.

“This has been several years in the making,” said Chris Ulrich, the chapter adviser and a technology and biology teacher at the high school. It started small, with the introduction of more ag-related curriculum from a district that wanted to see its state standardized biology scores improve.

Student interest grew over the years, enough to develop ag-specific courses, which eventually led to the school’s first FFA chapter. Ulrich’s daughters are both members.

Laura, the oldest, is a senior this year, so she won’t be in the chapter for long. “But I’m excited to see where it goes,” she said.

Their activities thus far have mostly involved fundraising and drumming up local interest. With 67 students currently enrolled in ag-related classes, Ulrich is sure their number will continue to grow.

Despite some nerves, the five representatives of the chapter were all grins when they were officially welcomed into the FFA organization in front of over 5,000 people.

With the two new additions, the number of state FFA chapters is now up to 150.

New or not — first-year freshmen or graduating seniors, high school student or government officials — “we’re all united by the blue jacket,” said Secretary of Agriculture Russell Redding, an FFA alumnus.

“The opportunities provided to me through the FFA, and in the show ring, are what framed who I am and being secretary of agriculture today.”

Opportunities certainly await for the four students chosen as state stars for their outstanding performances in their supervised agriculture experience, or SAE.

The four will represent Pennsylvania at the Eastern States Exposition in Massachusetts in September.

Also competing on the national scale will be Jacob Kinzer, last year’s state vice president and the Pennsylvania candidate for the national FFA officer team. He will undergo a series of interviews and evaluations this fall at the National FFA Convention for the position.

Kinzer and Ulrich have made their marks, and so will each of the 420 new members ready to start their FFA journeys.

Walking through the Farm Show Complex on Monday, it was impossible to miss the blue jackets in every nook and cranny of the place. In a sea of them, they all look the same — but each one represents something and someone different, ready to leave an impact.