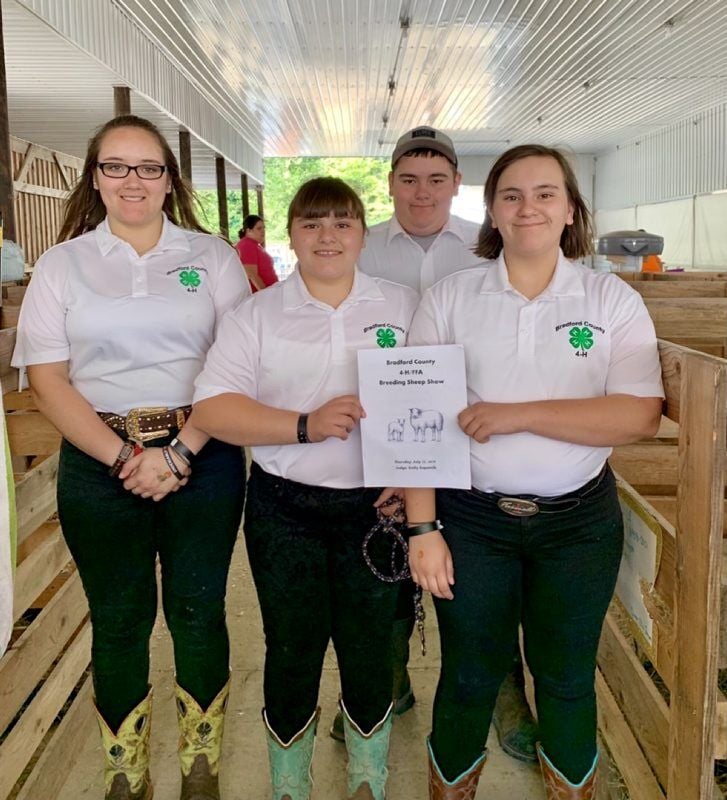 From left are Sophia, Gracie, Gabe and Olivia Johnson. The four siblings are members of the Rising Stars 4-H Club in Bradford County, Pa. They spent the last several years showing sheep together at the Troy Fair. 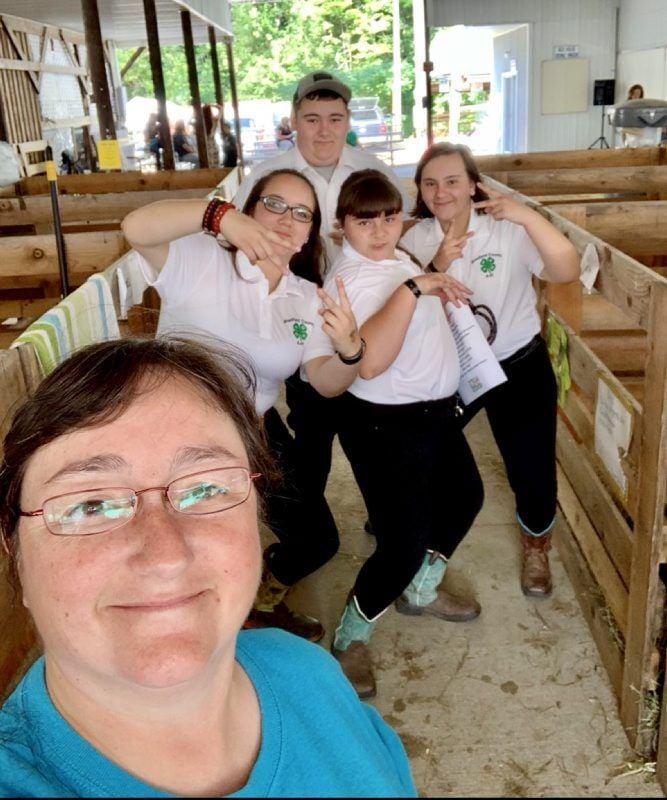 Even though winning a ribbon at the fair is a goal for the Johnson family, having fun is the most important aspect. Fran Johnson, front, is the leader of the Rising Stars 4-H Club, and her kids, from left, Sophia, Gracie and Olivia, and Gabe in the back, take time from competing to have fun at the 2019 Troy Fair.

Gracie Johnson, seen here showing her ewe, Penelope, at the 2019 Troy Fair, is looking forward to returning to the show ring this week after last year’s fair was canceled due to the pandemic.

The first time Gracie Johnson took an animal in the show ring at the Troy Fair in Bradford County, Pennsylvania, she walked out with the grand champion.

That was five years ago, and Johnson, 13, took home the honor with a Romanov ram. Johnson admits the early win raised the bar high for her future years of showing livestock, but the feeling she had persists to this day, regardless of the result.

“I felt excited and nervous because I wasn’t that experienced at showing animals. I just decided to have fun with it, and that’s what I still do today,” Johnson said. “I don’t go for place or ribbons. I go because I love to be around animals and I have fun doing it.”

Last year, Johnson and the other members in her Rising Stars 4-H Club missed out on the fun when the Troy Fair, along with most livestock competitions, was canceled due to the COVID-19 pandemic. Even as the status of the fair was in limbo last year, Johnson prepared for the show ring like she always does. She had planned to show a sheep in the breeding category, and every day, Johnson worked with the animal, holding out hope that the fair would be held.

“I treated the animal like we’d have a fair, even though it was looking like that wasn’t going to happen,” she said.

When the fair was officially canceled for the year, Johnson’s mother, Fran, said the heartbreak extended throughout her family. In addition to Gracie, Fran has three other daughters that all show sheep at the fair. Her oldest daughter, Sophia, was 18 in 2020 and missed her last year of eligibility to compete as a 4-H member.

Now that COVID-19 vaccinations have significantly reduced the spread of infections and businesses are getting back to normal, the Troy Fair will return on July 26. Three of Fran’s daughters will eagerly head back to the show ring after spending months working with their sheep.

“We work together as a family preparing our animals for the shows. Last year, the kids felt like the summer was ruined without a fair,” Fran said. “Now, it breathes life into our summer to have the fair back.”

Lessons Learned in the Ring

Gracie picked a different sheep to show in 2021 —a purebred Romanov ewe that was a triplet born in 2019. After a missed year in 2020, Gracie has been busy brushing up on the basics of handling sheep in the show ring and re-learning the skills that earned her a grand champion ribbon five years ago.

“You have to be patient with sheep. They need to be held in a certain position with your knee against their chest and their legs a certain way, and you have to make sure your sheep doesn’t move or kick the judge,” she said. “That’s when your training really pays off.”

While patience is a required attribute for the show ring, confidence is just as important. Gracie learned that lesson during her first year with the grand champion ram. When she was in the ring, the animal reared up. Fran remembers thinking her daughter could lose control.

Instead, Gracie settled the ram, maintained her composure and smiled at the judge.

“It really teaches the kids how to handle pressure and respond when things don’t go as planned,” said Fran, who also serves as the club leader for Rising Stars 4-H Club and runs the poultry show at the Troy Fair. “When my kids go into the ring, they take a piece of me with them, and every time I’m proud of how they handled things.”

All of the sheep that the Johnson daughters show are in the breeding category. After the fair, the animals are brought home and then they’re bred in the fall. The rams are sold and the ewes are kept on the farm. Those that meet the standard for body condition and temperament could become future show animals.

For Gracie, she’s just happy to build on her 4-H career in the show ring, now that the fair is back. And, when she enters into the ring this month, guiding her ewe in front of spectators, and a judge, the feeling will be similar to the one five years ago.

“Last year we trained every day, all spring and summer, and then there was nothing to do,” Gracie said. “I’ve done this for a while now, but I’m really looking forward to getting back. It feels like the first time I ever did this.”

Will you attend your local fair this year?

A New Beef Barn for Bedford

The new Bedford Grange Mutual beef barn will debut this year at the Bedford County Fair. The new barn is a result of the community coming together to raise money for an updated structure.

A 4-H Veteran Who Makes A Difference: Mentoring the Next Generation of 4-H

Sharon Nolan has been involved in Pennsylvania 4-H since she was 8. Now, after 11 years as a 4-H club member plus some 34 years as a dairy club leader, Nolan is helping her grandchildren embrace 4-H.