Even for Lebanon Area Fair attendees who don’t know Katie Shaak, she was easy to find in the crowd with her fair queen sash and crown.

Shaak, a Penn State junior from Annville, pulled double duty at the fair this year as fair queen and hog exhibitor.

The two responsibilities made for some busy days and long hours.

“I would say that I definitely got a lot less sleep than I normally do,” Shaak said.

Shaak was chosen as fair queen at a July 24 competition, and her royal duties began immediately afterward, at the fair’s opening ceremony, which Shaak said was one of her favorite moments as queen.

She wanted to run for queen in 2019, but she missed the application deadline. In 2020, Lebanon held a modified fair because of the pandemic, so Shay Miller, the 2019 queen, retained the title for a second year.

This was Shaak’s final year of eligibility, so she gave it one last try and emerged with the crown.

In addition to her fair queen responsibilities, Shaak showed two market hogs on July 26. She walked away from the show ring with the reserve champion Duroc, and a crossbred that won second in its class.

“I was a little bit nervous with my crossbred,” Shaak said. “It was my extra pig. My other pig that I was supposed to bring had died the day of weigh-in.”

Luckily, Shaak and her sister decided to buy an extra pig for the first time this year, and “it really paid off,” she said.

Shaak buys her pigs from her cousin and uncle, and the animals are raised on their farm.

Because the fair queen is responsible for handing out ribbons at shows and taking part in photos for the grand champions at the livestock sale on July 30, Shaak was thankful to have some help with her pigs.

“My sister and my cousin got my pigs ready for (the sale) while I was taking the pictures with the champions,” Shaak said. “The people in my life that worked in the back definitely made this entire week possible. The show was the exact same way. I was handing out ribbons while my sister and cousin were getting my pigs ready, so they definitely did a lot of the work for me.”

“I was genuinely surprised,” she said. “I have not done that well in the past. I did not expect to do that well with the sale. But I am very happy with how it turned out and extremely thankful for the buyers.”

Though Shaak didn’t wear her fair queen sash and crown while selling her animals, auctioneer Harry Bachman did announce that she was the fair queen, which Shaak thinks helped increase her earnings.

Shaak will represent the Lebanon Area Fair at the state fair queen competition in Hershey on Jan. 22 and 23.

Another well-known face seen at the fair this year was U.S. Rep. Dan Meuser.

Meuser attended the livestock auction, where he purchased a steer from James Voight of Fredericksburg. He then donated the steer, which will be enjoyed at the Lebanon County Livestock Club’s 4-H banquet in November.

Pennsylvania Rep. Frank Ryan bought a lamb from Reagan Grumbine, of Myerstown, which was also donated for use at the banquet.

Prior to the sale, Margaret Wenger of Wengers of Myerstown, a farm machinery business, joined the 4-H members for a group photo.

Wenger and her husband Carl, who died April 30, have paid the dues of all livestock club members since 2004.

Before the animals were sold, Carl’s signature hat and bolo tie were auctioned to raise money for a new pavilion at the fairgrounds.

The auction raised $22,900, and the Wenger family will match that amount and additional donations up to $50,000. Donations were still being accepted after the sale. The hat and tie will be displayed in the new pavilion, which will be named after Carl.

The livestock auction began with the sale of champions.

Dylan Fessler of Robesonia sold the grand champion market steer to MidAtlantic Farm Credit and the Kathy Barry Agency for $4,000.

The reserve champion market steer was sold by Hayden Weaver of Ephrata to Bell & Evans and Walnut Ridge Farms for $3,000.

The grand champion market lamb was sold by Gavin Molnar of Grantville to Fulton Bank for $3,500. 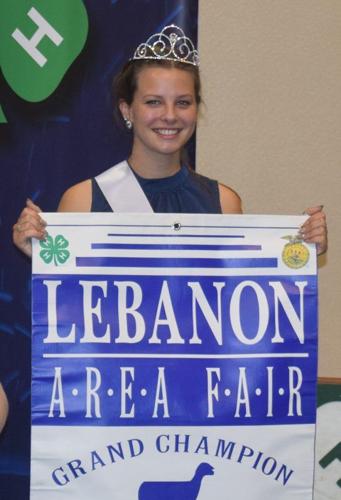 Katie Shaak was crowned Lebanon Area Fair Queen on July 24 and showed her market hogs during the fair on July 26. It was a busy week for the Penn State junior. 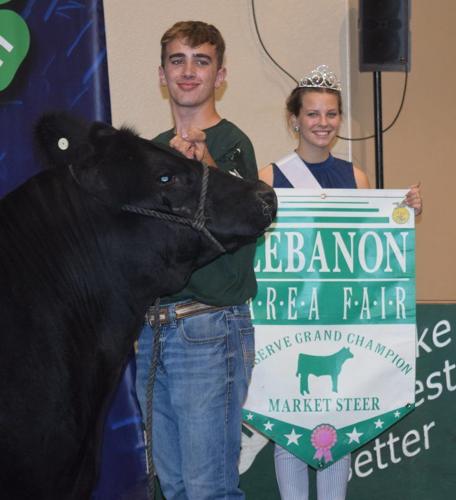 Hayden Weaver, of Ephrata, Pa., poses for a photo with his reserve champion market steer along with Katie Shaak, Lebanon Area Fair Queen. 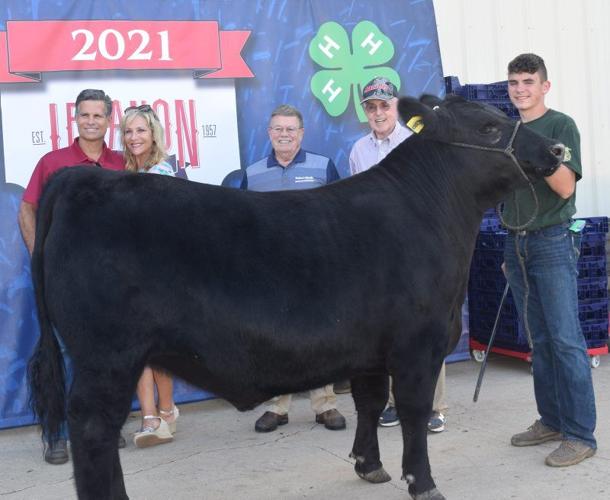 The livestock 4-H club members pose with Margaret Wenger. The Wenger family donates money to pay the dues for all club members.

View Photos From the Lebanon Fair and Livestock Auction

Katie Shaak was crowned Lebanon Area Fair Queen on July 24 and showed her market hogs during the fair on July 26. It was a busy week for the Penn State junior.

Hayden Weaver, of Ephrata, Pa., poses for a photo with his reserve champion market steer along with Katie Shaak, Lebanon Area Fair Queen.

The livestock 4-H club members pose with Margaret Wenger. The Wenger family donates money to pay the dues for all club members.

After taking a year off due to COVID-19, AJ Sams flew in from Tulsa, Ok., to take part in his family’s tradition of showing Jerseys at the Bedford County Fair.

The newly renamed York State Fair was held from July 23-30. In previous years, the fair has taken place in September.

An 18-year-old first time livestock exhibitor and a 12-year-old exhibitor with four years experience both enjoy showing and selling at the Schuylkill County Fair.

Siblings Take on Busy Week of Showing at Grange Fair

Three siblings plus four different breeds of livestock makes for one busy fair week. But Taylor, Landon and Levi Wrye enjoy all of the busyness of their week at the Centre County Grange Fair.