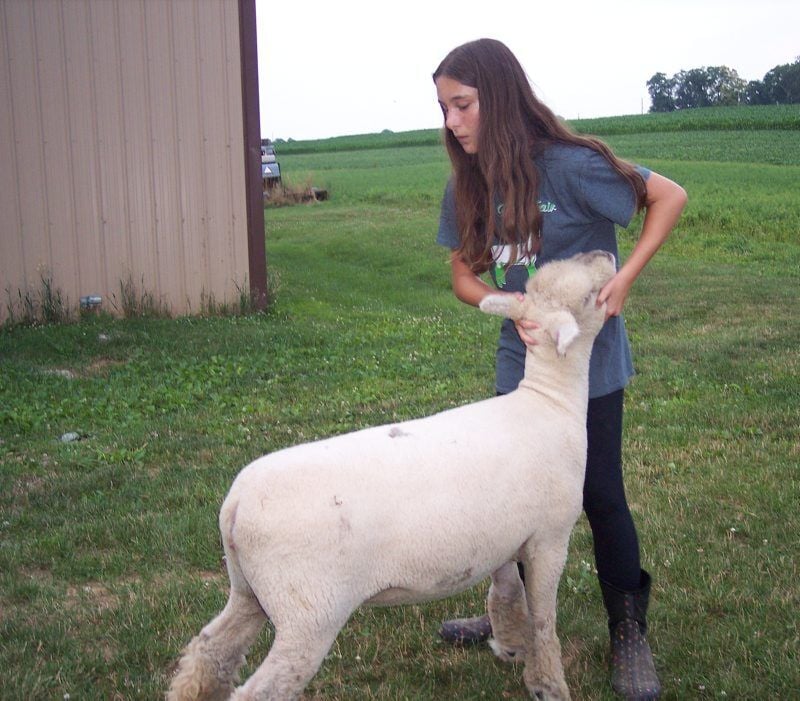 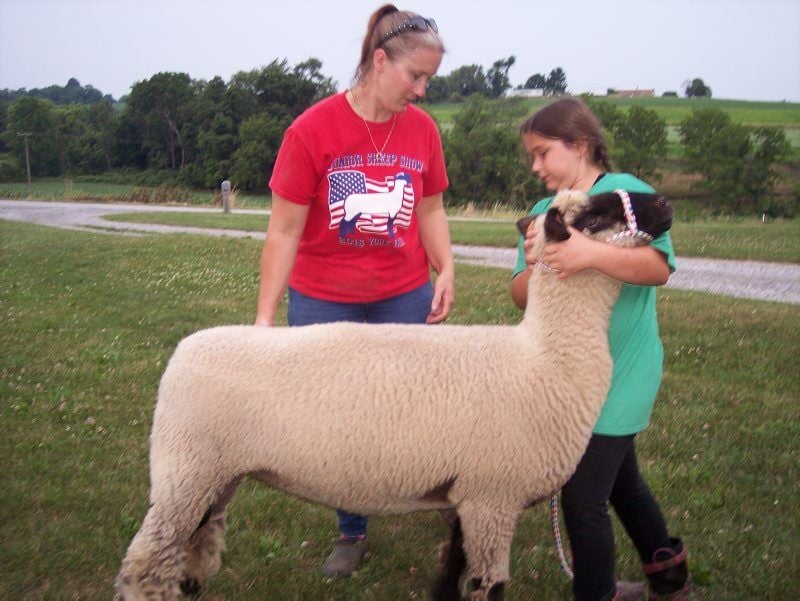 Taryn gets a helping hand and veteran exhibitor advice on setting up her ewe from her mom, Heather Stem. 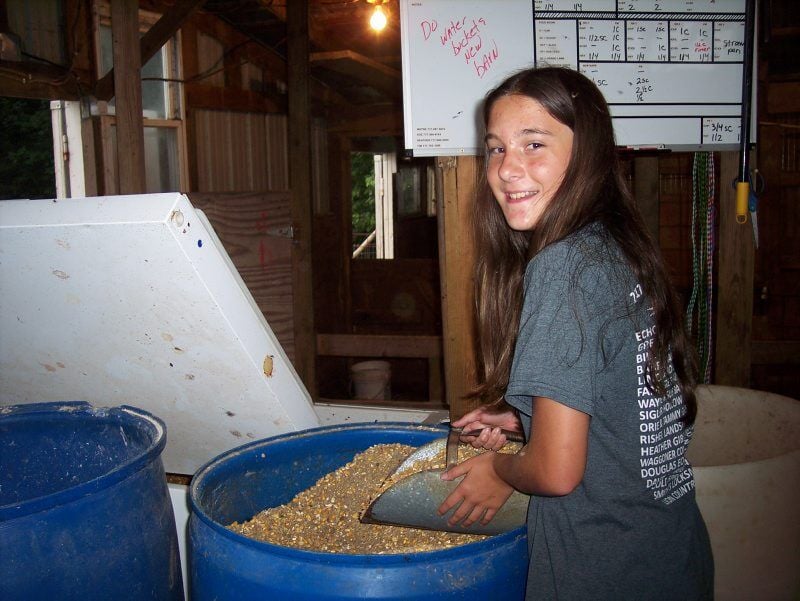 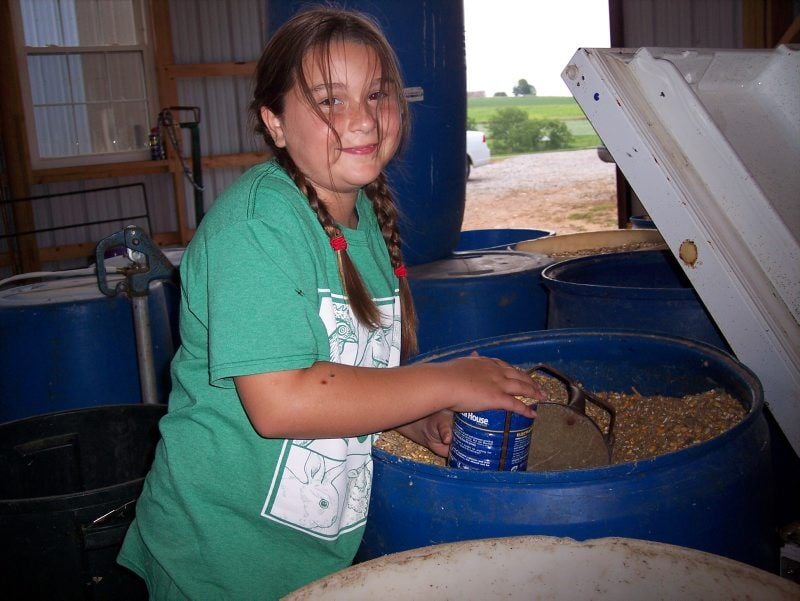 Hungry lambs are eager to chow down as Taryn Stem measures out grain for their evening feeding in Red Lion, Pa.

Eleven-year-old Taryn Stem is the sort of individual that all livestock exhibitors yearn to have helping with their show string.

“I like to do the work involved with showing,” she said matter-of-factly.

In fact, the sixth-grader at Larry J. Macaluso Elementary School in Red Lion Area School District admits she enjoys the feeding, washing, grooming and related show preparation work with her flock of Shropshire sheep more than the actual showring competition.

Taryn Stem and her older sister, Dalena, 13, are the daughters of Timothy and Heather Bankert Stem, and the fifth generation in the Bankert family to exhibit sheep at the York State Fair. Like the fair itself, showing sheep there has deep roots for the family. Their great-great-grandfather Ken Bankert is the one who first became involved in the fair’s sheep show competition. His children, including his son Preston, continued the involvement, and then his son, Wayne, followed in his footsteps.

After Wayne Bankert and his wife Sue married, they took a sheep-showing break for a period of time, but rekindled the competitive spark when Heather and her sisters, Kelly Jo McCullough and Brandy Bailey, were old enough to participate in 4-H.

Heather met her husband, Tim Stem, at sheep show competitions. When the first of the Stem sisters’ combined 20-head show string enters the fair’s judging area this year, three generations of Bankerts are likely to be on hand at ringside.

Despite the heat of recent weeks, Taryn and Dalena have been focused daily on feeding, grooming, walking and training their sheep in preparation for the summer’s show-ring lineup. With the York State Fair dates having been moved ahead several weeks before the traditional early-September opening day, many exhibitors are expected to be juggling nearly back-to-back competitions across the region.

By the time the York State Fair opens, newcomer lambs to the Stems’ show string will have already been shown at the large, regional North East Youth Sheep Show (NEYSS), which is held July 15-17, at the “Big E” exhibition grounds in West Springfield, Massachusetts.

With the South Mountain Fair at Biglerville, Adams County, opening right on the heels of York State Fair’s Aug. 1 closing day, there will be little time for the Stems to have any break during a three-week stretch of show events.

After the COVID-19 pandemic caused closures last summer of most agricultural fair competitions, the Stem sisters are looking forward to reconnecting with their friends, and fellowship among fair exhibitors.

“I like connecting with the animals and it’s cool to experience the show ring,” Dalena said, adding, “But we do it mostly for the fun.”

According to Dalena, the York State Fair sheep show may be even less competitive this year with the change of show dates. A number of the usual exhibitors are not expected to participate this year, due to planned vacations, sports participation and other activities scheduled over the fair’s new July run.

“Numbers are up for open class dairy and dairy goats, beef, hogs and sheep,” she said. “We have entrants coming that have never entered the York Fair, even with some other shows going on.”

Like many of the exhibitors, the Stems have mixed feelings about the change in York State Fair dates. Market animals, traditionally bred to “make sale weight” by early September, may be lighter than desirable for the earlier show and the annual junior sale. Or, if bred to meet the new fair show dates, market animals may run heavy if held back for the juniors’ “Kids Feeding the World” community fundraiser show and sale, scheduled in September at the York 4-H Center.

Due to the timing change, 4-H animals will be judged twice during the York State Fair show events, once for open class selection and the other serving as the annual county “roundup” competition, according to Sue Bankert.

Bankert is grandmother to Dalena and Taryn, and is a long-time leader of the Winterstown 4-H Community Club.

“I’m a little concerned that the timing just isn’t the best for the animals,” Heather Stem said, of the fair’s decision to make it an earlier event. Still, the Stems had no second thoughts about participating.

“The York Fair is a family tradition and showing sheep has helped to make me who I am,” said Heather Stem, a Red Lion Area School District special education teacher.

Being a teacher allows more time over the summer for the family’s showing activities, she said. Her husband, Tim, a Baltimore firefighter, also enjoys the show competitions, and he schedules vacation time around fair events.

Despite the date changes, both Delana and Taryn are looking forward to being able to again enjoy taking part in some of their favorite York State Fair traditions, like looking at all the competition animals and other youth projects, and enjoying their favorite milkshakes. One tradition missing from the fair, however, will be the Farm Learning Center, a long-time favorite site for farm youths to reach out to the general public with educational activities.

A show-ring veteran starting when she was 5 years old, Dalena will be a freshman at Red Lion Area High School in September, and is already planning FFA projects involving her Southdown sheep. However, due to the timing change, she will not be able to show in the FFA competitions this year, since the FFA year runs from August through July.

With most of the Bankerts’ extended family now having “graduated” out of youth showing, Delana and Taryn will continue to uphold the long-time family sheep-showing tradition. But they miss not having extended family members circling with them in the show ring.

It’s just not quite the same, they agree, when your cousins are no longer there in the competition with you. But the family support, like so many York State Fair traditions, carries on.

Revved Up About Fair Season

Attendees at the Kempton Fair sound off about what they missed most during last year’s cancellation and what they were most excited about for this year.

Wyatt and Aubrey Mase will be the third generation of their family to exhibit livestock at the upcoming Lebanon Area Fair.

The Big E, billed as the third largest fair in the country, welcomed 1.5 million visitors to its West Springfield site from Sept. 17 through Oct. 3 after health concerns from COVID-19 forced cancellation of the event in 2020.