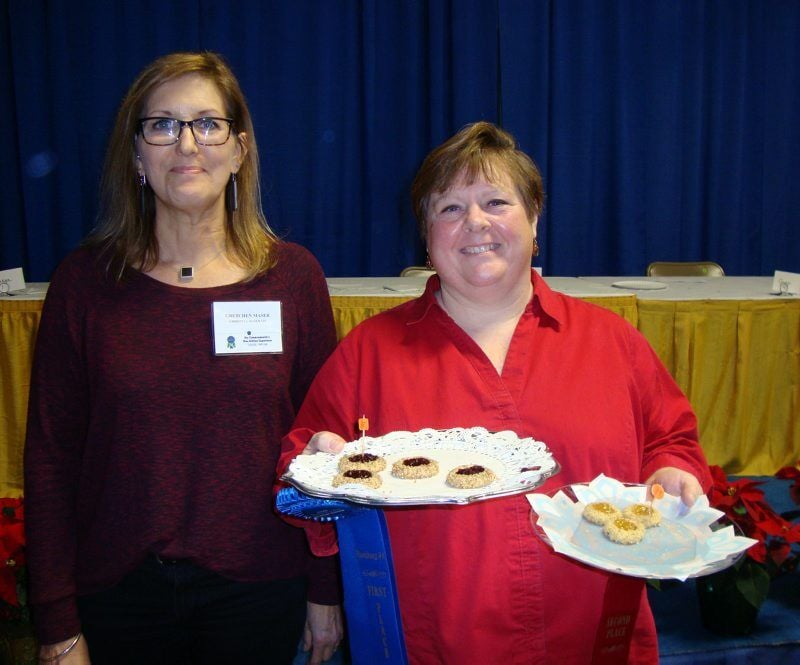 Thumbprint cookie contest judge and event sponsor, Gretchen Maser, is shown with Shelley Pokrivka at the 2016 Pennsylvania Farm Show. Pokrivka accepted the blue ribbon and a check for $150 on behalf of the competition’s winner, her daughter, Elizabeth Pokrivka. Shelley took the second-place ribbon and $100 for her own entry. 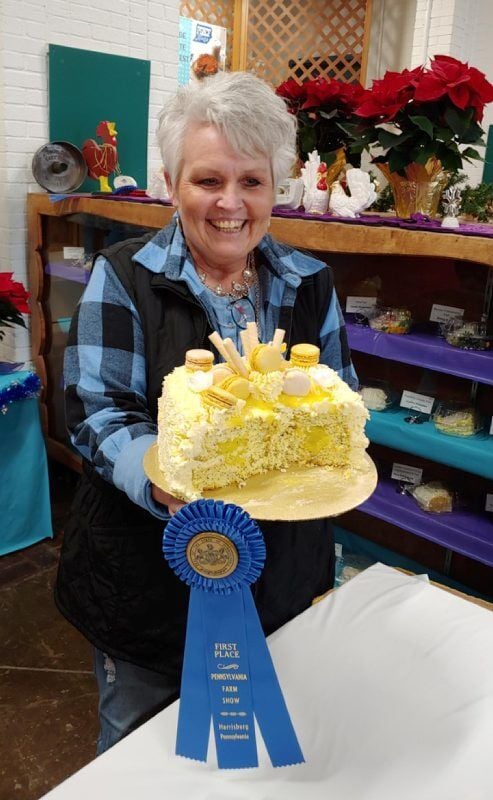 Thumbprint cookie contest judge and event sponsor, Gretchen Maser, is shown with Shelley Pokrivka at the 2016 Pennsylvania Farm Show. Pokrivka accepted the blue ribbon and a check for $150 on behalf of the competition’s winner, her daughter, Elizabeth Pokrivka. Shelley took the second-place ribbon and $100 for her own entry.

For some of the Pennsylvania Farm Show’s award-winning baking contestants, 2020 was a year of challenges instead of competitions.

For many years, entrants in past Farm Shows’ biggest baking competitions — the Blue Ribbon Apple Pie Contest, the PA Preferred Chocolate Cake Contest and the Incredible! Egg Angel Food Cake Contest — were required to earn their way to the state-level contests by first scoring a victory at one of Pennsylvania’s 109 local fairs.

But, in the wake of the ongoing COVID-19 pandemic, when most local fairs opted to cancel this summer, would-be entrants in the Farm Show’s three most elite baking competitions were left without their usual avenue for competing at the state level.

The final blow came when the Farm Show itself opted to go online as a virtual event in 2021, to adhere to public health guidelines and slow the spread of infections. This decision eliminated the events that annually bring together Pennsylvania’s best bakers to vie for bragging rights and cash premiums that can yield as much as $500 for the first-place winners.

Also canceled were the Farm Show’s “open” baking contests for goodies like sticky buns, whoopie pies, jam and jelly bar cookies and shoofly pies, which do not require entrants to have a preliminary fair win.

One of those frequent winning bakers, Juniata County’s Lucinda Donough, began entering baking competitions a decade ago after her children were no longer showing their Jersey dairy cattle at nearby fairs. In recent years, when Donough headed to the Juniata County Fair, the McClure Bean Soup Festival and Fair, or the Beaver Community Fair, she was delivering her pies and cakes for judging. Her goal has been to try to take top honors at one or more of these local fairs so that she’s entitled to display her baking skills at the following year’s Farm Show.

With those fairs canceled in 2020, Donough was disappointed, but also relieved, she said. Instead of baking pies and cakes this summer, she said she spent her time “washing hands, spraying with alcohol and wearing a mask,” referencing the safety precautions her dairy farming family is taking to combat the COVID-19 pandemic.

Asked about her reaction when she learned there would be no fairs for her to enter her baked goods into in summer 2020, Donough quickly responded, “I said, ‘Thank goodness!’”

Donough then explained she’d had a life-changing event for her family. Emergency open-heart surgery for her husband, Steve, just days after the 2018 Farm Show ended, has not only made it more imperative for him to avoid contracting COVID-19, but also sent her cooking and baking in new directions.

Following his surgery, Steve’s doctor recommended a diet based on consuming whole grains that are not enriched, as well as avoiding sugar and certain fats.

It “opened a whole new baking world,” said Donough, who searched for alternate ways to achieve fluffiness and flavor that normally derive from enriched flours, whole milk and butter. “Some of this (new) stuff is really phenomenal, with different tastes and textures,” she said.

While her family enjoys these new recipes, like using yogurt and flax seeds in a banana bread that Donough calls, “so good and so healthy,” she also acknowledges that winning baking competitions calls for relying on the more conventional basic ingredients.

This past fair season, Donough said, “I went cold turkey,” not even practicing any of her usual baking entries. She admits, “I got the urge to do it, but I’m fearful. I know what Steve went through.”

As for the Farm Show, Donough said she’ll miss attending, but, “it’s too scary.”

Given her prize-winning track record for baked goods, Donough looks forward to returning to competition after the pandemic.

She’s also learned to cope with the sour grapes that can come along with being a perennial winner. When someone says to her, “Oh, you always win,” her reply is, “No. I always try to win.”

Shelley Pokrivka, of York County, is another baker with multiple wins at many past Pennsylvania Farm Shows. She’s a 30-year veteran of the York State Fair, as well as the smaller Dillsburg Farmers Fair and Mason Dixon Fair, none of which were held in 2020 due to the COVID-19 pandemic. Because of her father’s unexpected death in early December 2020, Pokrivka finds for her that “it’s a blessing we don’t have the Farm Show (in 2021).”

Instead of focusing on further perfecting her winning recipes for events like the Farm Show’s angel food, chocolate cake and open sticky bun and thumbprint cookie competitions, Pokrivka turned her attention to holiday baking in the wake of her father’s passing. One night as Christmas approached, she was up until 12:30 a.m., baking her dad’s favorite chocolate chip cookies, partly in tribute to him and partly as therapy for herself, she said.

Given her husband John’s Slovak background, Pokrivka has become adept at baking “kolacky,” a traditional Hungarian Christmas cookie with cream-cheese dough stuffed with apricot, pineapple or prune filings, topped with crystalized sugar. Pokrivka labels her own heritage “Pennsylvania Dutchy,” and her personal holiday cookie favorites are snickerdoodles and her mother’s thin thumbprint cookies.

Looking ahead to future baking competitions, Pokrivka favors a “return to the basics.” With baking contests becoming so competitive, she feels some entries’ creativity has gone too far.

Another regular top finisher in the Farm Show’s baking competitions is Pamela Foor, of Bedford County, who said in December, “I’ll be glad when 2020 is over.”

An annual entrant at the Bedford County Fair, the Claysburg Farm Show and the Fulton County Fair — all canceled in 2020 — Foor said she feels sad for the youths who didn’t get to compete with their 4-H projects. But, she believes the fairs did the right thing.

“I was relieved,” she said of the cancellations, noting that, in addition to concerns about COVID-19, “I get stressed out when I bake for fairs or the Farm Show.”

Foor takes competitive baking seriously and even posts signs on her home’s entrances when she’s baking her entries: “Please do not slam the door — cakes in oven.”

The time off from competitions over the summer gave Foor the opportunity to work on perfecting her apple pie with a new crust recipe. She explained that the Farm Show’s apple pie contest is the only one of its three top baking competitions she has yet to win.

Foor said what she’ll miss most about the 2021 Farm Show is seeing the friends she’s made there through the years, including several of her usual co-competitors. To get her baking fix in late 2020, Foor made 23 kinds of Christmas cookies and arranged them on trays as gifts for neighbors and friends.

Overall, it was a different December for Foor, because there was no Farm Show to prepare for, and COVID-19 made her a reluctant Christmas shopper. Matters were further complicated by her mother’s death not long after Thanksgiving.

The Foor family typically takes off the week between Christmas and New Year to “hang out and relax.” This year, family togetherness will mean more than ever and Foor is counting on her not-quite-2-year-old granddaughter to lift their spirits. “She’s an entertainer, she’ll get us through,” she said.