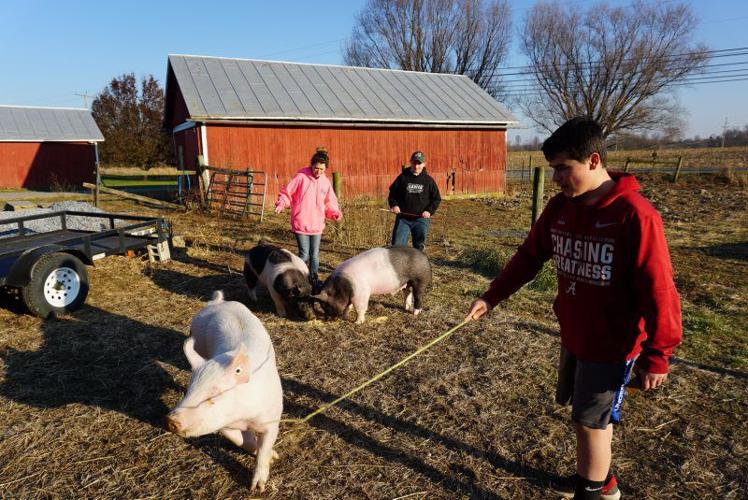 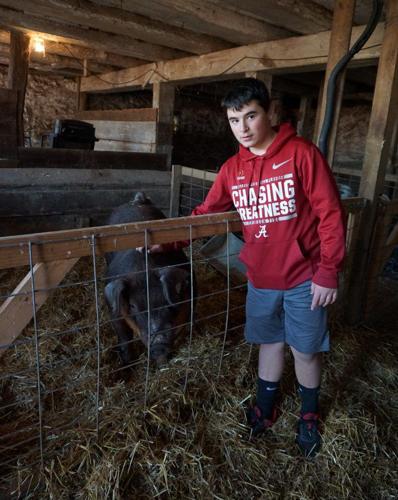 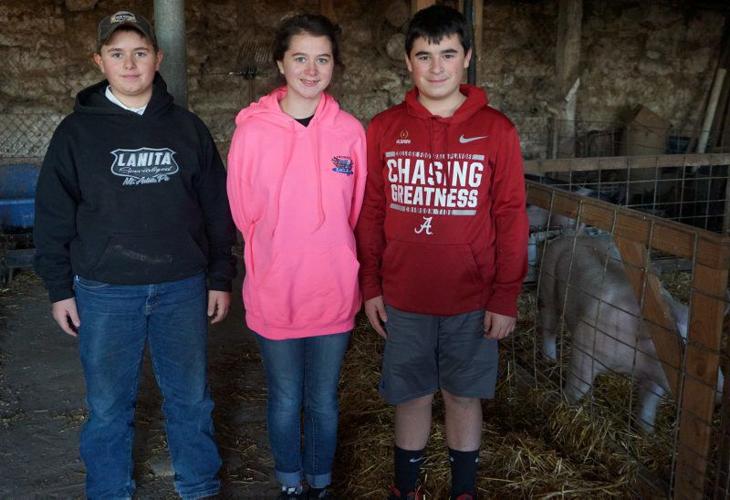 Photo by Sue Bowman Joe Tice checks on the Duroc breeding sow he exhibited at the 2018 Lebanon Area Fair. He and his siblings are hoping she will produce piglets for them to show at the fair in 2019.

Photo by Sue Bowman Joe Tice checks on the Duroc breeding sow he exhibited at the 2018 Lebanon Area Fair. He and his siblings are hoping she will produce piglets for them to show at the fair in 2019.

FREDERICKSBURG, Pa. — When asked about their favorite animal to raise and exhibit, the Tice children unanimously agree: pigs. They find pigs easy to work with and note that they’re a friendly species.

For the Tices — Sierra, 13, Joe, 12, and Josh, 10, of Fredericksburg, Lebanon County — taking pigs to the Pennsylvania Farm Show has been a goal for a number of years; however, they lacked the facilities to house the pigs in cold weather.

That changed this year when Linda Hill and David Scaglioni purchased a farm near the Tices’ home and offered space to keep pigs in their bank barn’s lower level. Sierra, Joe and Josh were delighted to find an all-weather home for their pigs and responded by constructing four pens to hold their project animals. The farm also has a barnyard that’s perfect for exercising the pigs and training them for the show ring.

Although Sierra, Joe and Josh have been attending the Farm Show for as long as any of them can remember, 2019 will be a special year for them. While they typically accompanied their parents, Joe and Ashley Tice, to the Farm Show, this will mark the first time they’ve gone there as exhibitors.

The Tice siblings will be showing a Yorkshire pig and two crossbred pigs. Sierra will also be participating in the Farm Show’s Fashions with a Flair revue, modeling a sleeveless A-line dress she sewed using a pineapple-patterned cotton fabric.

The Tices have exhibited a variety of livestock at the Lebanon Area Fair each year. The first projects for all of them were dairy heifers, with Joe and Josh also showing pigs and dairy beef in their first appearances at the fair. Joe and Josh showed market lambs for two years as well.

The Tices have also enjoyed good results at the fair’s youth livestock auction. Their mother’s employer, Mike Saphore, owns Fredericksburg’s Eagle Hotel and has been generous in purchasing their animals. He’s also given them good publicity by featuring pork from their pigs on the hotel’s menu.

Even though this is their initial venture into the Farm Show’s Small Arena show ring, the Tice kids have plenty of reason to feel at home there. Their father showed pigs, steers, lambs and beef heifers at the Farm Show when he was in 4-H, so they’ve heard all about his experiences exhibiting in Harrisburg. They also have another strong connection to both 4-H and the Farm Show because of their grandmother, Debra “Debbie” Tice.

Debbie Tice is employed by Lebanon County’s Penn State Extension as 4-H livestock coordinator. This means that she serves as a leader for the Livestock Club, along with Ginger Weaver, Nadine Moore and Brenda Crouse.

Debbie Tice has been known to find teachable moments both in and outside of the 4-H setting to quiz her grandkids on their livestock knowledge. For instance, on a recent trip to have a look at their project animals, she asked, “What is the gestation period for pigs?” All three replied in unison, “Three months, three weeks and three days!” Debbie Tice nodded her approval and reminded them that this means pigs born around the time of the Farm Show will be ready to be shown at the Lebanon Area Fair in late July, and pigs born near to the time of the Lebanon Area Fair will be ready to be shown at the Farm Show.

Debbie Tice also is a familiar face to many folks at the Farm Show who gather each year in the Equine Arena to watch the judging of the various beef classes. She is a fixture at the ringside table where the beef shows’ announcer sits where the results of the various classes are tabulated and ribbons are issued. This is part of her role serving on the Farm Show’s beef committee, and she also helps out in other ways, such as checking in beef animals upon their arrival at the Farm Show and ensuring they have their correct stall assignments.

This year, Debbie Tice hopes to watch her three grandchildren in the show ring with their pigs, but since both beef and pig shows will take place on Sunday, Jan. 6, during the same time slots in different locations, she is already figuring out how to cover all her bases.

When asked what it’s like having a grandmother who is also their 4-H leader, Sierra Tice said, “It’s different.”

Josh responded, “It’s convenient.” He said it’s usually their mother who takes them to 4-H meetings at the Lebanon Valley Expo Center, but it’s their grandmother who generally gives them a ride home after the meetings.

As a result, Debbie Tice said that her grandchildren often get drafted into doing things like setting up and tearing down after the club’s meetings. She’s also likely to recruit them for special projects, such as community service programs. The silver lining is that the Tice siblings have developed into willing workers who enjoy pitching in.

All that pitching in seems to be paying off. These three responsible young people are active in their community beyond 4-H. Josh and Joe both play rec league sports like soccer and baseball. Sierra, an eighth grader at the middle school, plays second base and catcher in a softball rec league.

All three Tice youngsters also have an eye on the future. Sierra aspires to become a large-animal veterinarian. Following along in the footsteps of their father, grandfather and uncle, Joe and Josh both foresee careers as truck drivers or mechanics.

As for the Farm Show, Sierra, Joe and Josh not only hope to do well in the show ring, but they’re also looking forward to the food, the milkshakes and seeing their friends there. It sounds like a winning combination.