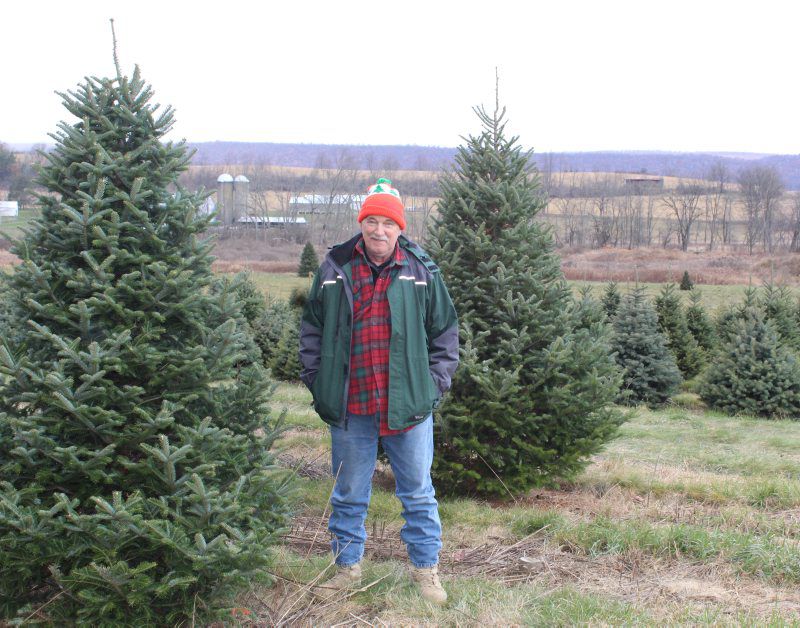 Photo by Tabitha Goodling Larry Kuhns stands in his field of trees in Centre Hall. 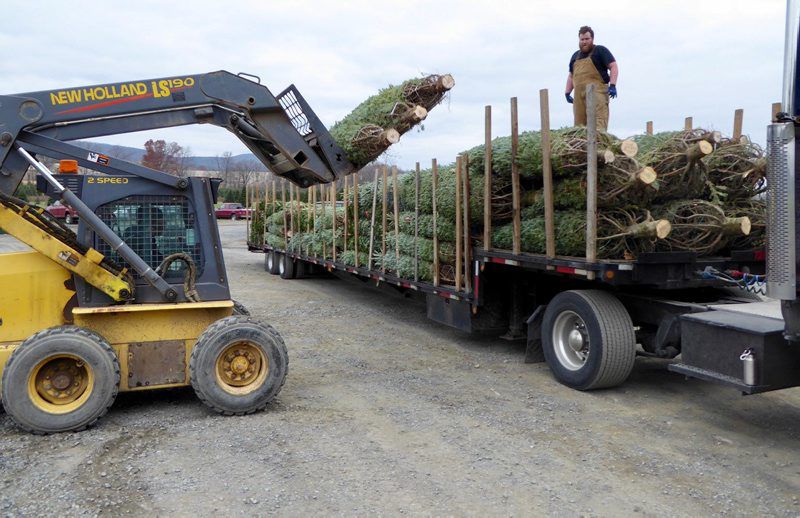 Photo by Tabitha Goodling Wrapped trees are ready to go at the tree farm in Centre County. 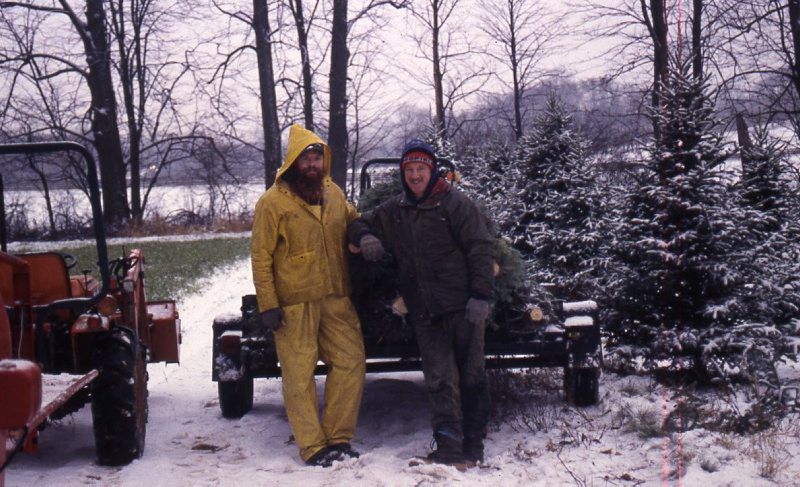 Photo provided by Larry Kuhns Shown is an old photo of a young Larry Kuhns and Doug Banker, a 20-year employee and farm manager, baling trees for wholesale orders. 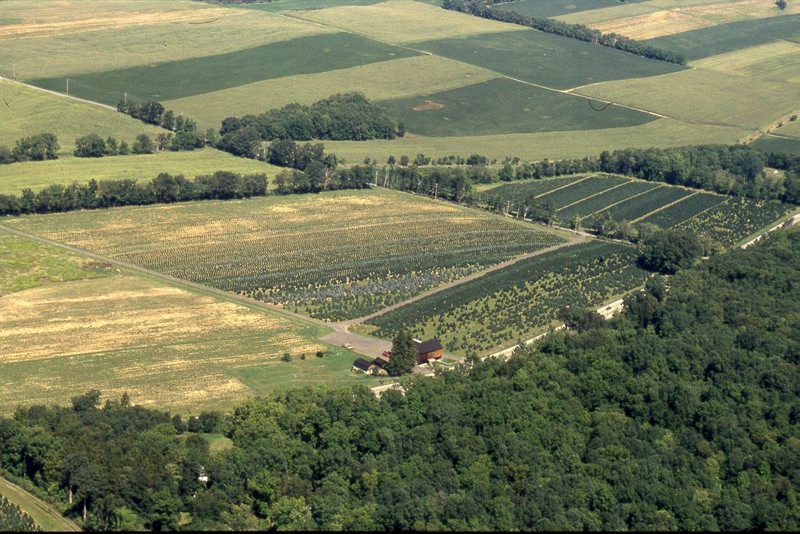 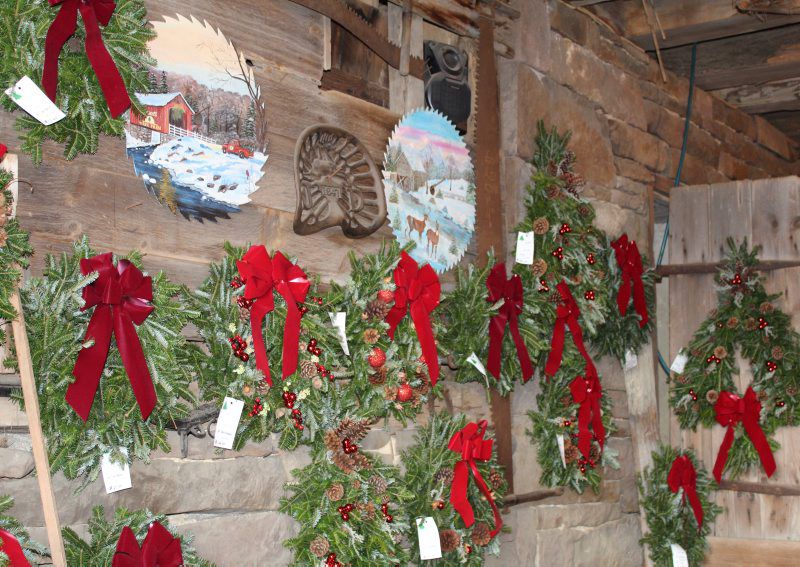 Photo by Tabitha Goodling Pictured are some of the wreaths in the barn ready for sale. The saw blade at left was painted by John Kuhns, Larry’s brother.

Photo by Tabitha Goodling Larry Kuhns stands in his field of trees in Centre Hall.

Photo by Tabitha Goodling Wrapped trees are ready to go at the tree farm in Centre County.

Photo provided by Larry Kuhns Shown is an old photo of a young Larry Kuhns and Doug Banker, a 20-year employee and farm manager, baling trees for wholesale orders.

Photo by Tabitha Goodling Pictured are some of the wreaths in the barn ready for sale. The saw blade at left was painted by John Kuhns, Larry’s brother.

CENTRE HALL, Pa. — At 71, Larry Kuhns is still selling Christmas trees. Neither age nor cancer could keep this professor of ornamental horticulture from operating his business.

Kuhns Tree Farm has been visible to those traveling through Centre County since the mid-1980s.

But it was a trail of wrong decisions that led the tree farmer to his current path.

Larry Kuhns grew up in Lehigh County near Allentown, the son of pig farmers.

“I enjoyed the farm, but not pig farming,” he said.

So Larry Kuhns took some courses in engineering.

Then he decided chemistry might be his field of interest.

“That wasn’t any better,” he said.

In 1968, things changed as he was drafted into the Army after attending school in Connecticut.

When he returned from the service, Larry Kuhns applied to graduate school and began to study plant pathology. He received a brochure from a relative about a training program with Longwood Gardens.

“So I withdrew from the plant pathology. I was sold on ornamental horticulture,” he said. “I was accepted into the program at Ohio State.”

Larry Kuhns said there was one job he wanted more than anything. Fortunately, the job came open six months before he graduated from Ohio State.

It was a position with Penn State Extension that made him a specialist in ornamental horticulture.

His adviser at Ohio State recommended he focus his studies on herbicides.

“Around the time I started working here (at Penn State), more and more herbicides were introduced. Roundup had just come out,” he said.

Larry Kuhns received his Ph.D in ornamental horticulture from Ohio State in 1977.

“We had well-integrated research with Extension,” he said. “I always wanted to start a nursery, so I bought some land.”

He and his wife, Marianne, purchased 44 acres of land in Centre Hall in 1980 while living in State College.

Larry Kuhns said the farm was “one big cornfield” when the couple purchased it. There was no plumbing or electricity. A barn sat on the site; its original portion had been built more than 200 years earlier.

“I realized I could have a Christmas tree farm and still work at Extension,” he said.

They planted trees on all but 4 acres that were too wet for the trees.

After a while, Larry Kuhns said, it became overwhelming and he had to stick to tree farming.

In 1986, the first 100 trees were sold wholesale. Retail sales began a year later.

The couple purchased an additional 10 acres in 1992, growing 11 species of trees on the 54 acres. This included spruce trees at first: Norway, white and Colorado.

Larry Kuhns said spruces do not make the best Christmas trees, so they switched to Fraser firs, white firs, or concolor firs, and white pines.

“The Frasers are sensitive to wet feet. Where they have died, we replanted with Colorado spruce, since they can take the wet soils.”

The farm has been open to business for 30 years. Sales typically begin the day after Thanksgiving and go through Dec. 23.

The staff includes 10 people on the weekends when the busiest traffic comes through. During the week, three workers help to cut and wrap trees.

“One guy has been with me here 20 years. Doug Banker has been invaluable to me,” Larry Kuhns said.

Planting season takes place in April with four to six employees assisting with that process. Pruning takes place after the Fourth of July.

Busy season during the end of November through Dec. 23 often includes the visits of faithful customers who have been coming for more than two decades. People from as far as Lancaster County make the trek to Nittany Valley for a tree. Kuhns Tree Farm also delivers trees to a few special businesses and restaurants in downtown State College. Wreaths and swags are available from the barn. All of the décor is made with greenery from Kuhns Tree Farm.

After customers make their way into the fields for a tree, they return to the old barn to get it wrapped. Inside the barn is a space where they can have their photos taken just below special painting projects created by Larry Kuhns’ late brother, John, one of which is a painting of the farm.

Talking about John and his creativity is difficult for Larry. He says time has become precious in recent years due to trials such as these.

Larry Kuhns had a setback a year ago when he had surgery for a brain tumor on Dec. 13, 2016, midway through the busy season. He had an additional surgery this past August.

Larry Kuhns said he sticks to the management end of the farm’s work now. Side effects from his treatment left him with fatigue and confusion. Larry Kuhns said this illness has made him realize he needs to slowly step away from his love of the tree farm to focus on his first love: his family.

Larry Kuhns said he and his son want to go hunting this year, although in years past it was difficult to schedule in the midst of their busy season at the tree farm.

The Kuhns family chooses their Christmas tree early. Larry Kuhns has chosen them in the past, but his wife, Marianne, makes the final call.

“I found one last year. My wife said it has to go. It’s not wide enough,” he said, noting they both knew their daughter Catherine would be home for Christmas and wanted a wide tree.

“So I waited it out with them and let them choose. And it was the nicest tree we ever had. This year I took a photo of myself with the tree I picked and sent it to my daughter and my wife.”

The part of the tree farming that keeps Larry Kuhns involved so long has nothing to do with his studies in horticulture.

“If you were here on the weekends and saw all the families out here searching for the perfect tree you would see why I do this,” he said.

For more information, go to www.kuhnstreefarm.com. The farm is open 9 a.m. to 5 p.m., Tuesday through Sunday, 2101 Boal Ave., Centre Hall, and closed Mondays.