As Laverne and Julie Glick of Hickory Run Homestead head into their fourth growing season on their small farm outside of Sunbury, Pennsylvania, they have come to the realization that their style of farming, called “market gardening,” is not for everyone.

Market gardening involves using a small plot of densely planted cultivated land, which is more like a backyard garden than a farm, Laverne Glick said.

The Glicks’ growing plot is half an acre of minimally tilled land on their 17-acre farm, covered seasonally by caterpillar tunnels. Hickory Run prides itself on the use of hand tools, not tractors, and its commitment to being 100% free of pesticides, herbicides and chemical fertilizers.

Laverne grew up on a dairy farm in Lancaster County, and both he and his wife have backgrounds in teaching at the junior high school level. After he and Julie got married 10 years ago, they moved back and forth between several Pennsylvania locations, finally deciding to rent land from Julie’s parents in Lewisburg, Pennsylvania.

Several years later, they bought their small farm outside of Sunbury and started a market garden almost immediately. The timing wasn’t ideal though — they were not able to secure a spot at the Lewisburg Farmers Market, so they sold produce at several smaller farmers markets throughout the region until a spot opened up at Lewisburg.

Laverne said that their style of planting works well for their family and their business goals. Before the start of each season, Laverne takes time to plan, asking himself, “What lifestyle do I want and what do I value? What income do I need to support that lifestyle? And what and how much product do I need to sell to generate that income?”

“For the last 10 or 15 years, I’ve really enjoyed gardening as a hobby ... and I want my work to be more like a backyard garden. The method that I’ve chosen is more in line with that (philosophy). There are other efficiencies that come on a small-scale,” he said.

He said that he is able to interact with his three small children (ages 9, 7 and 3) in the garden without the fear of heavy tools or tractors.

“My oldest daughter has helped me at the market quite a bit, checking people out. Both of my daughters will help in the pack house — where we wash, spin, pack and label. They help with the labeling. They have also gotten really good at cleaning garlic and onions,” he said. 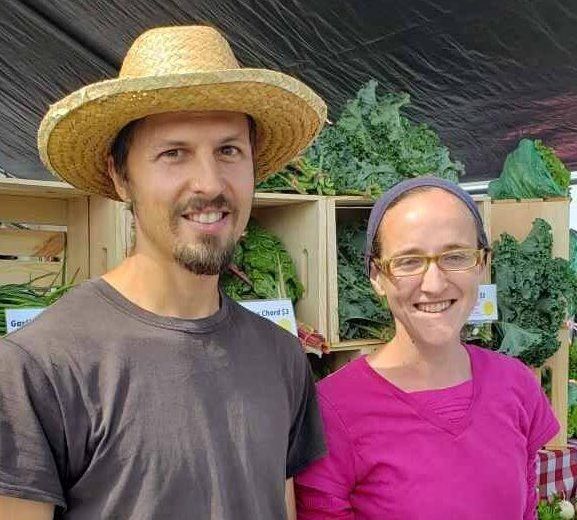 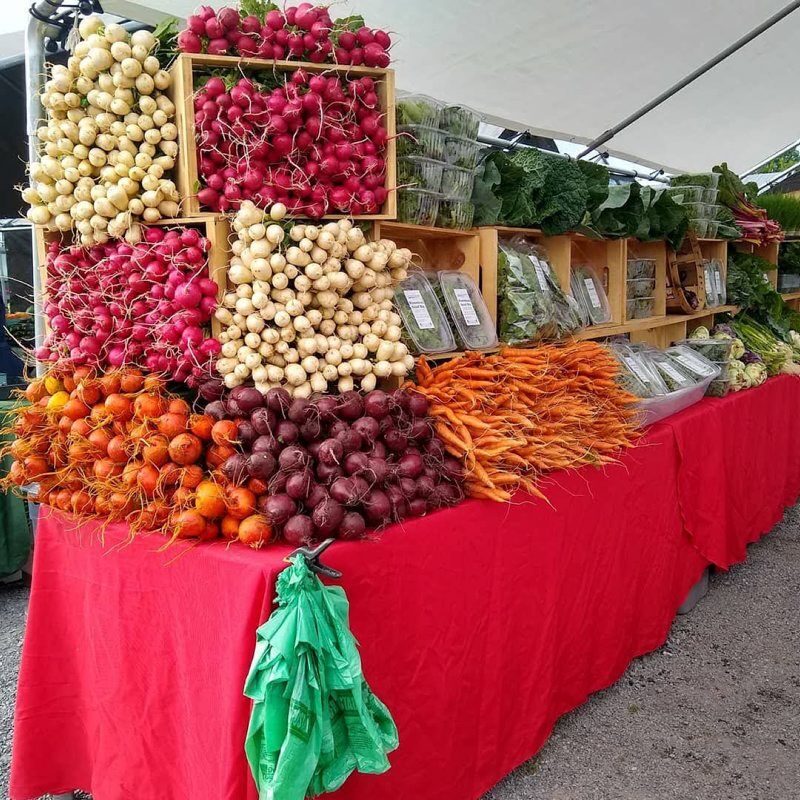 Color, organization, neatness and abundance are appealing to the customers at the farm market. 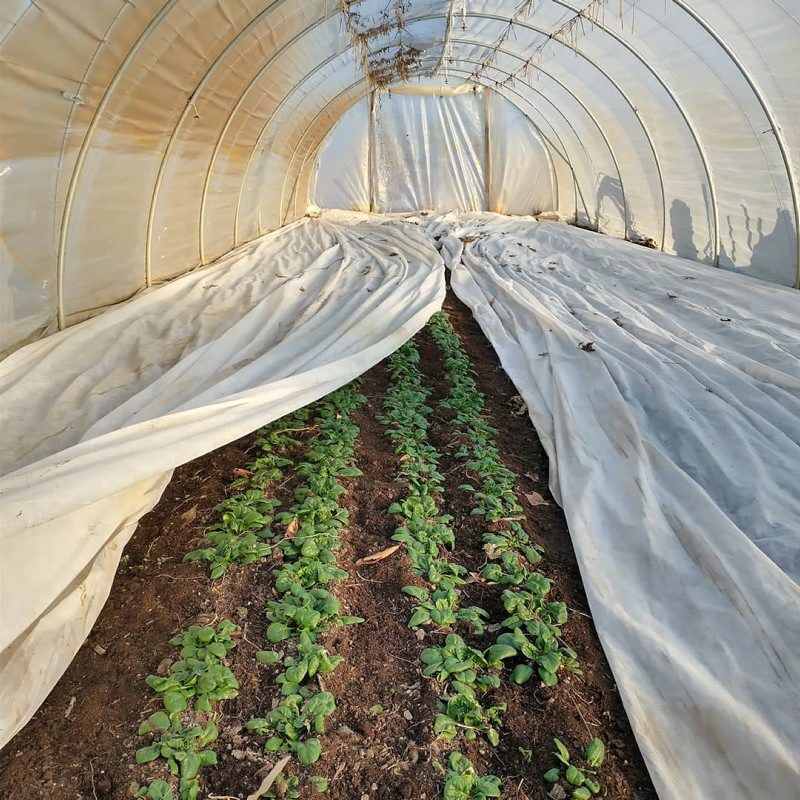 Overwintered spinach in the high tunnel awaits spring's lengthier days of sunshine, so it can grow faster. 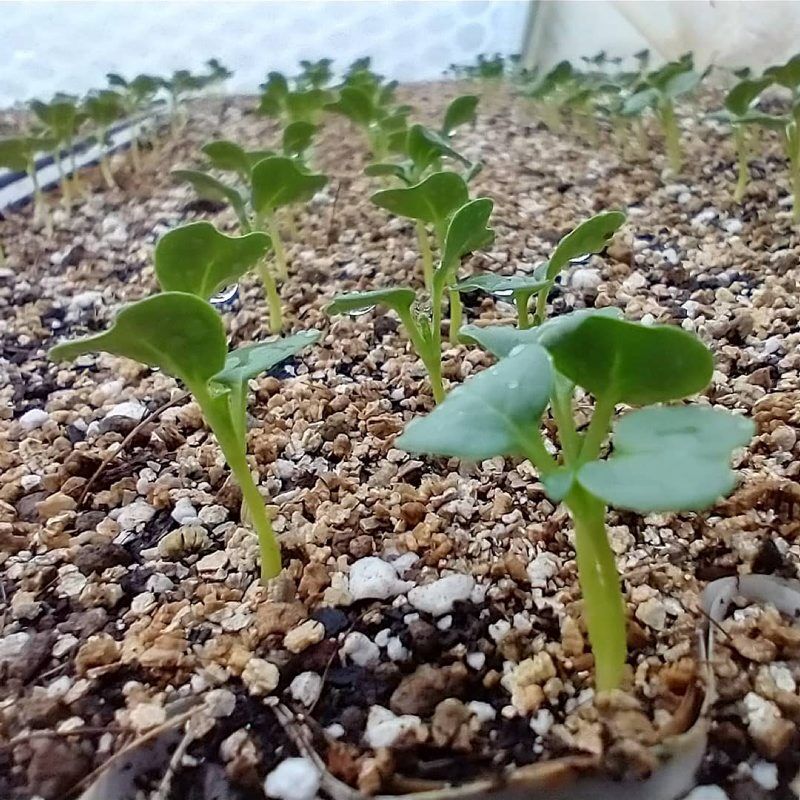 Sprouting greens are a sure harbinger of warmer weather on its way. 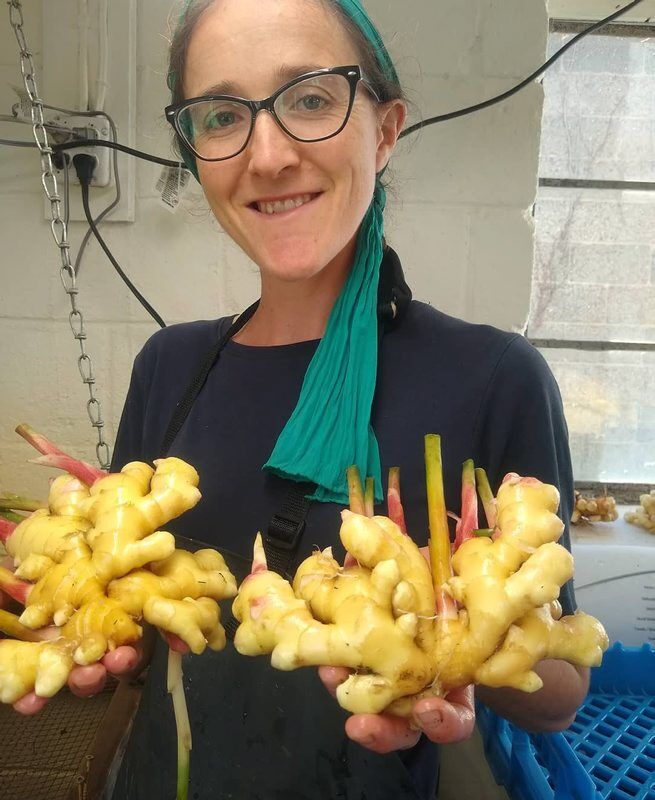 Julie and the last of the ginger for sale in November. 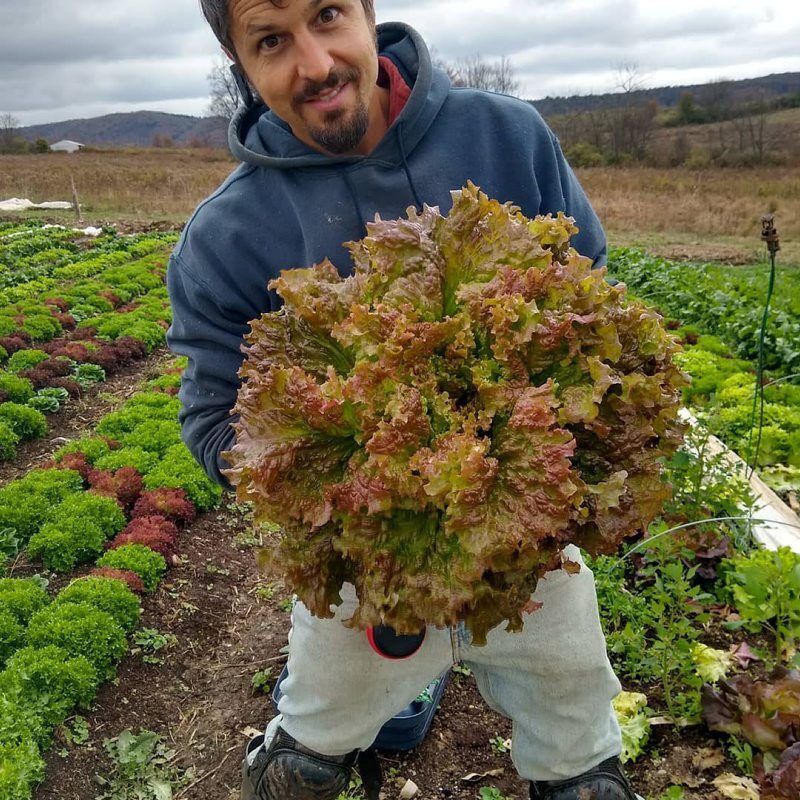 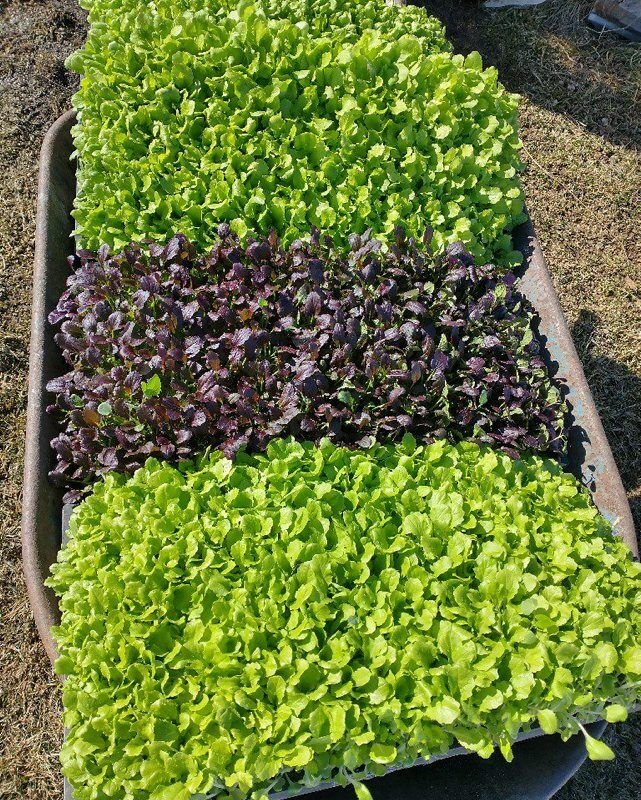 Flats of greens await planting in the soil. 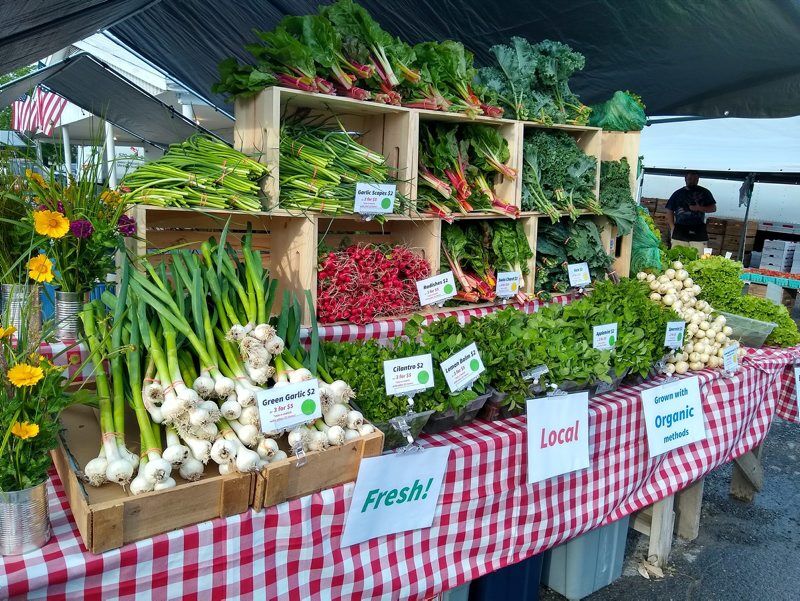 The Glicks make sure their farmstand looks appealing.

Color, organization, neatness and abundance are appealing to the customers at the farm market.

Overwintered spinach in the high tunnel awaits spring's lengthier days of sunshine, so it can grow faster.

Sprouting greens are a sure harbinger of warmer weather on its way.

Julie and the last of the ginger for sale in November.

Flats of greens await planting in the soil.

The Glicks make sure their farmstand looks appealing.

The growing methods the Glicks have chosen appeal to discerning customers in Lewisburg and beyond, who are accustomed to paying a premium for organic produce at local grocery stores.

When it comes to setting prices for his produce, he looks at what other vendors are charging and what consumers are paying locally at the grocery store.

“I’ll look at other organic produce growers in the area and specifically at the market that I’m at. I also like to go into Giant every once in a while and look through the produce sections, because a lot of my customers, if they aren’t buying organic at the farmers market, they are buying organic at the grocery store. My prices are often similar to what I see there; I’m not afraid to have them a little higher, because in a lot of cases my product is going to be a better quality,” he said.

Glick said that his salad mix will last, on average, up to five times longer than what consumers will find at the grocery store — a week or more in the refrigerator.

“The salad greens and lettuces are something I’m known for. I enjoy growing greens — head lettuce, salad mix, spinach, arugula and microgreens, as well as root vegetables like carrots, beets, turnips, radishes, bok choy, kohlrabi. It’s a big variety. I also do tomatoes, peppers, onions, cucumbers and some crops that a lot of others don’t grow, like celeriac and leeks. Kale and swiss chard are also big sellers and this year I’ll do collards, cabbage, broccoli and dandelion,” he said.

Last year, the Glicks introduced a “farm card” concept, which is a pre-loaded gift card that customers can use at their stand at the Lewisburg Farmers Market or in their online store.

The farm card gives customers more flexibility because they can choose what they want and how much they want each week, while also giving the Glick family more flexibility to travel or take a week off as needed for their family’s needs. As a farmer, the card helps the Glicks receive the same benefits as that of a CSA, or community supported agriculture farm, in that they are being paid up-front at the start of the season.

They have also successfully launched a CSA in several forms:

The first option is a Free-Choice CSA, which is the most popular, allows customers to buy the pre-loaded gift card valued at $150, $300 or $450. Customers automatically get 5% more added to the card and can use that card to shop in their online store or at the farmers market stand. Customer orders can even be pre-placed by Monday at midnight to ensure a Wednesday pickup at the Lewisburg Farmers Market or home delivery in Lewisburg and Sunbury for an additional fee of $5, with a minimum order of $10.

The second method is the Farmer’s Choice CSA, which offers the best value, Glick said. It ranges from $567-$695 and allows customers to receive a bag of five to eight select vegetables from the farm every week of the season for 28 weeks.

Finally, the option of the Salad CSA ranges from $369-$512 and customers receive three select salad greens every week of the season for 28 weeks.

While one might think that the biggest challenges of a small-scale farm like Hickory Run are caring for the vegetables and harvesting by hand, Laverne said his biggest challenges continue to be soil health and crop health. He cites winter fungal issues and summer grasshoppers as hurdles that caused a fair amount of angst.

“With the grasshoppers, I tried several organic options and they didn’t really work well. There is a particular kind of grasshopper bait that works well for organic farms, but it wasn’t available at the time I needed it.”

Laverne is being proactive this year and seeking out the bait now, before the swarms of grasshoppers inevitably arrive.

He said that continued education and being proactive are really key.

“As a farmer, (it is) just learning to know what to expect and staying on top of things (before they become an issue). I have learned what a healthy crop looks like and what doesn’t, so being able to start to see signs of something to come even before it’s an issue (is important).”

He cites learning to grow greens year-round as a fun challenge.

“I have been able to have head lettuce and salad mix all summer, so that took quite a few trials ... my head lettuce sales really increased in late July, August and September,” he said.

He continued, “Many of my customers have their own gardens, but they don’t know what it takes to have fresh lettuce available every week. They might do two plantings. I am planting lettuce every week so I have some ready for market every week.”

“I have crops in the ground outside like kale that overwinter just fine because on the coldest days (this winter) they are protected by snow. In the spring, it’s growing back already. It’s a really good treat in the early spring. Next week I’ll be harvesting that and putting it in salad mix,” he said.

Maryland farmers markets are hoping for another booming season as they prepare to reopen in 2021.

A Fresh Take on Farming

In the last five years, Fresh Take Farms has expanded by diversifying its operations and embracing the owners’ love of gardening.