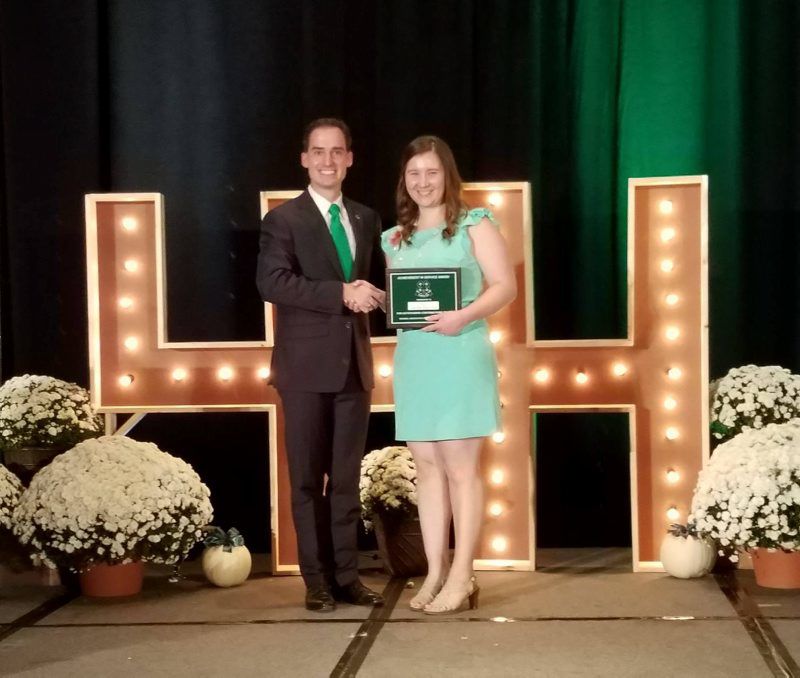 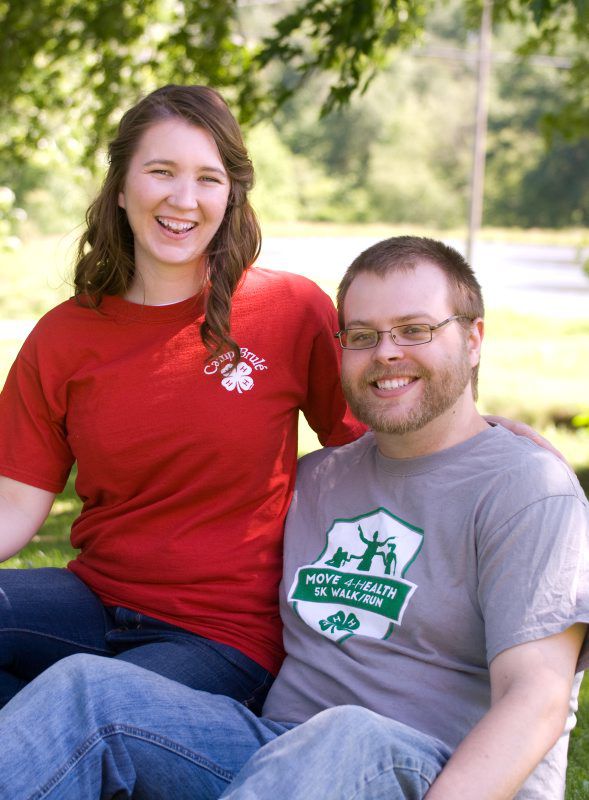 Submitted photos Jeannette Stackhouse and her husband, Curtis Stackhouse, are both involved in 4-H. 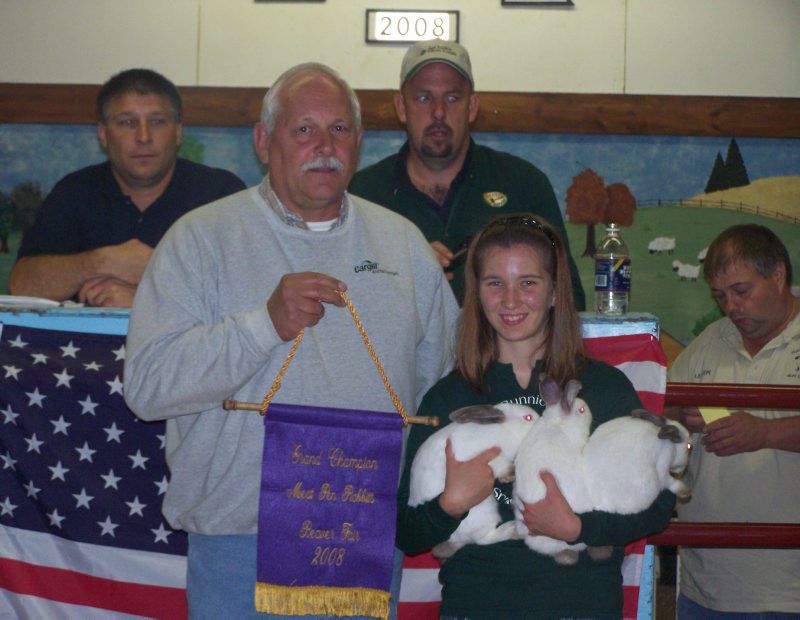 The 2008 grand champion meat pen rabbits at the Beaver Fair were raised by Stackhouse, shown getting her award here. 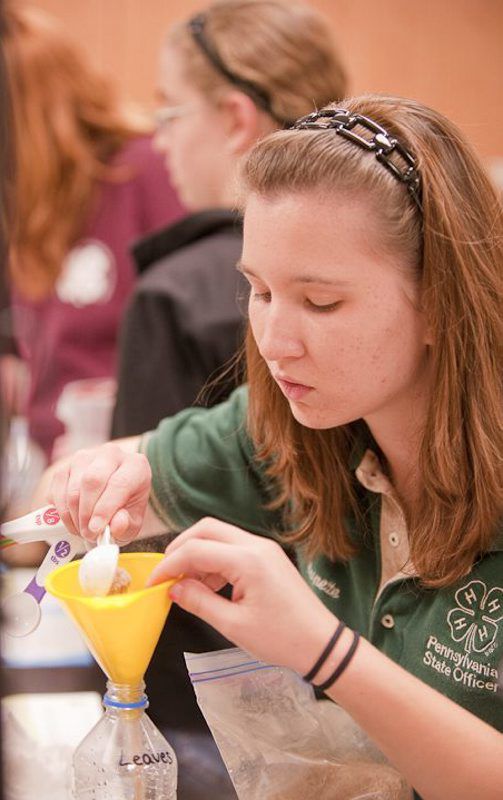 Stackhouse has worked on many 4-H projects through the years. 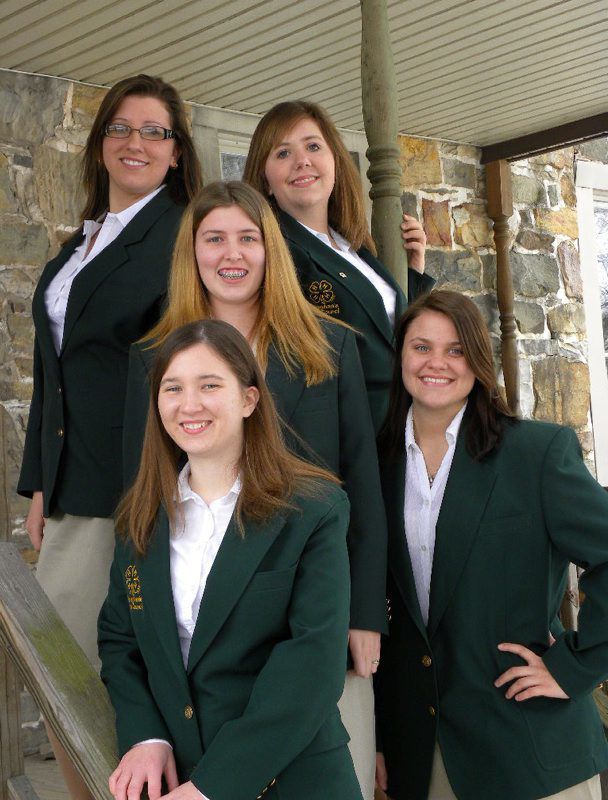 Stackhouse in her current job with the 4-H State Council.

Submitted photos Jeannette Stackhouse and her husband, Curtis Stackhouse, are both involved in 4-H.

The 2008 grand champion meat pen rabbits at the Beaver Fair were raised by Stackhouse, shown getting her award here.

Stackhouse has worked on many 4-H projects through the years.

Stackhouse in her current job with the 4-H State Council.

STATE COLLEGE, Pa. — Since she entered her first 4-H club at the age of 8, Jeanette Stackhouse has always loved 4-H.

Never did the Snyder County farm girl imagine 4-H would be her career.

Stackhouse grew up Jeanette Blank in Middleburg, Pennsylvania, on a dairy farm operated by her parents, Ken and Joanne Blank.

“If I wasn’t hanging around the farm or following my parents around, I was doing something else on the farm,” she said.

Her sole job was to feed the calves, something Stackhouse did until she left for college.

It seemed only natural to join 4-H since she knew her way around animals and farm life. However, her first club experiences were chosen to appeal to her creative side. She chose crafts and other arts-related 4-H clubs and later took a special interest in raising rabbits.

In high school, she was an FFA member and FFA reporter.

The reporter title was one she enjoyed, so she also served as a reporter for 4-H.

“Because of the 4-H state council role as a reporter and the position as FFA reporter, I really thought I was going to have a career in media,” Stackhouse said.

During her first semester at Penn State’s College of Communications, Stackhouse aimed to be a member of the media and had a minor in agricultural science.

“I was told there was a real need for 4-H educators. When I realized that need, it was enough for me to change my major,” Stackhouse said.

Stackhouse graduated from Penn State in 2013 with a degree in agriculture and Extension education.

She then went on to earn her master’s degree in the same field at North Carolina State University. Stackhouse’s first position was with Lycoming County Extension in Pennsylvania as a 4-H educator.

Once again, Stackhouse assumed her career path was set in stone as she took on the position in Lycoming County in 2014.

“I always thought I would be a county staff person. The people there have been there 20, 30 years. I thought that would be me, too.”

Stackhouse then learned of a position open at the state level for a 4-H teen manager that would oversee programs for 4-H’ers statewide.

The position seemed especially appropriate because it was interwoven with media expertise.

Her main responsibilities include a great deal of travel as she oversees 4-H commitments to the Pennsylvania Farm Show, the All-American Dairy Show, Farm City Day and the annual Pennsylvania Farm Bureau meeting, among other events.

Stackhouse oversees the 4-H state council, a role she once served as a teen.

“As an officer, I always enjoyed the excitement of telling people about 4-H. I loved to see the reaction when someone realizes, ‘Wow, I can live in the city and still be in 4-H.’”

Some of the programs Stackhouse has been working on at the state level for 4-H include introducing teens to the concept of career skills found through 4-H involvement.

She said the concept is to help teenagers realize that becoming active in 4-H clubs can inspire interests that carry them far beyond school and possibly even toward a lifelong career.

“I know I didn’t make connections about how 4-H could help me until a whole lot later,” Stackhouse said. In her case, because of joining 4-H, she found a career committed to her interests in media and agriculture.

“We help the teens realize: ‘I’m taking this project and I really like it. How can I make a career out of it?’” she said.

Stackhouse is also the official spokesperson for the 4-H state council. She often informs government officials of the significance of careers in agriculture as well as how 4-H can be incorporated in various ways.

Stackhouse said she has been having the teens think about the questions: “What is a 4-H member? Will it always be what we know it to be?”

She said 4-H is working on the concept of non-traditional access to the clubs.

There are afterschool programs, Stackhouse said, “that are supplementing activities they are learning in school and tak(ing) it a step further.”

Examples include embryology projects in which 4-H clubs bring an incubator into schools. They tie math and science lessons together to help understand the formation of and growth of chicken embryos.

Another project that is considered non-traditional is STEM outreach. This helps introduce young people to 4-H with clubs on robotics, aerospace and one that works with apps, or applications, that serve as maps.

The one- to two-hour programs may also include learning how to write code for computers.

Stackhouse also builds relationships with young people. Still in her mid-20s, teenagers respond well to her, and the public often mistakes her for a teenage 4-H participant herself.

Stackhouse had completed a project on autism spectrum disorder while completing her master’s program. This is something she plans to use in her role with 4-H on the state level, she said.

“My masters project at (North Carolina) State focused on ‘Finding Your Place in 4-H: Autism Spectrum Disorder.’ I had an experience as a teenager being a camp counselor with a 4-H member on the spectrum that impacted my decision to do this. ASD was not as talked about then as it is now, so I had some major misunderstandings about it that — through getting to know the child better and, coincidently, having a college course on the topic — helped me understand,” Stackhouse said.

As she continued to work with this child as a 4-H volunteer, and experienced other autistic children as an educator, Stackhouse said she realized the need for better support of youth on the spectrum within 4-H.

“They are often misunderstood as being disruptive or not engaged in what is happening, so through interviews, needs assessments and observations, I created a training for 4-H professionals and volunteers that teaches them what ASD is, some accommodations that can be made for youth in a 4-H club or event setting, as well as how to work with their family to identify appropriate accommodations.

So far, the presentation has been delivered in three states and an online module is in production.”

Stackhouse said no day or week is typical in her career. And, that is OK with her.

She is grateful that she can do what she loves, including educate the public about 4-H through writing and media. She also likes staying connected to the latest developments in agriculture, while working with and encouraging young people with similar aspirations like she once experienced.

Her position in State College caused her and husband, Curtis Stackhouse, who happens to be a 4-H leader in shooting sports, to move to Centre County.

“This was a good move for me,” Stackhouse said.