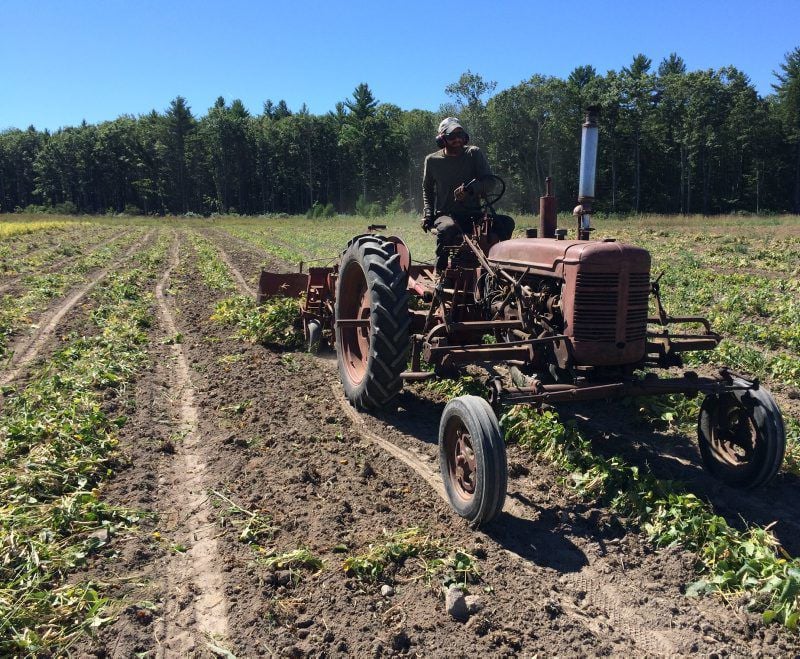 Photo provided by Charles Baer Cut beans are windrowed with a merger to expedite combining. 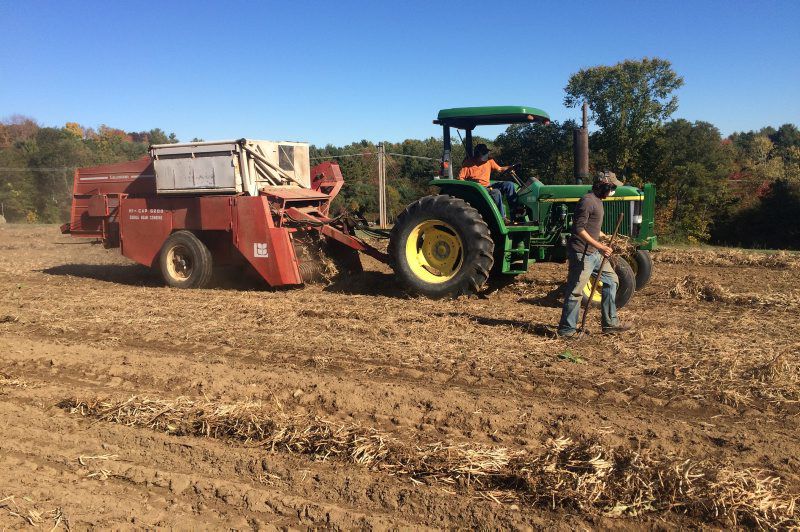 Photo provided by Charles Baer A Lilliston edible bean combine is used to harvest dry beans. These combines are gentle on beans to reduce loss and fracturing of the beans. 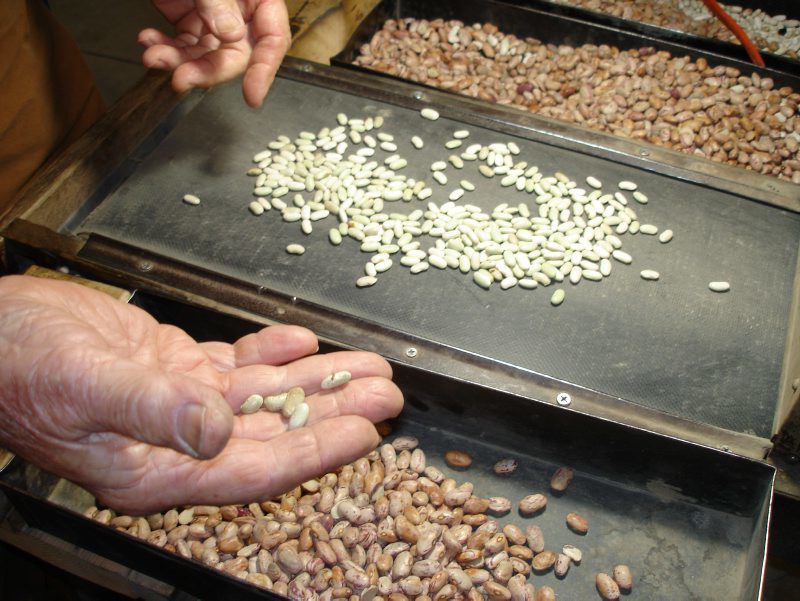 Photo by Guy Steucek Beans travel over a belt conveyer (middle of photo) so that workers can remove stained and deformed beans by hand. 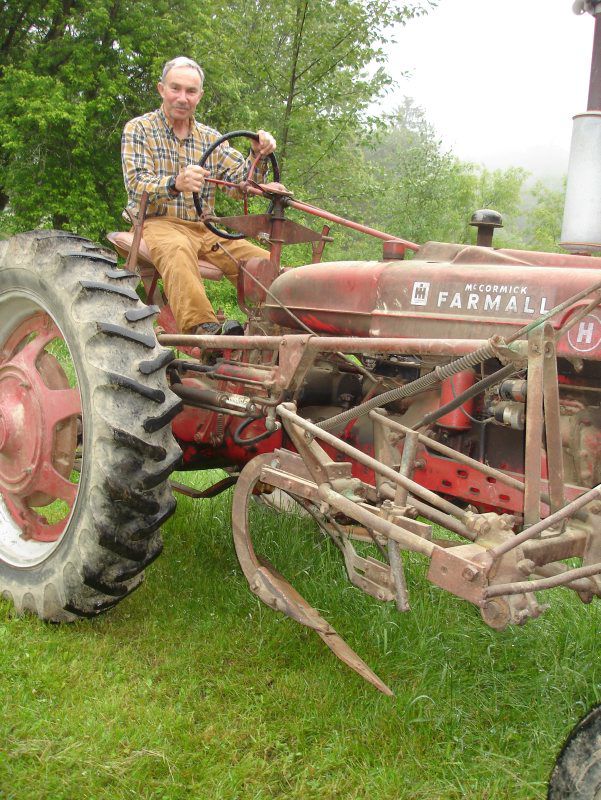 Photo by Guy Steucek Charley Baer is on his tractor that is outfitted with bean knives, seen under the belly of the tractor. When adjusted to soil level, these knives sever the stems from the roots. This is the first step in dry bean harvesting. 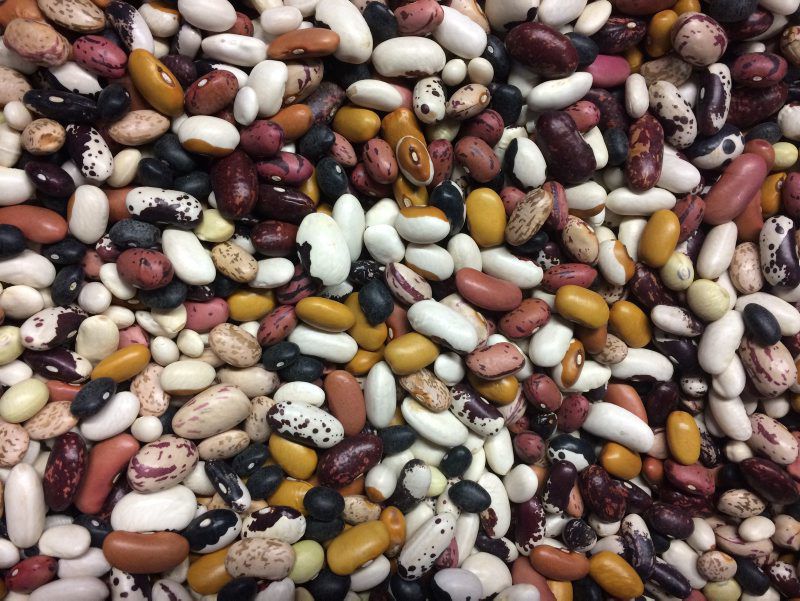 SOUTH BERWICK, Maine — According to author and National Geographic fellow Dan Buettner, “Blue Zones” are locations on Earth where people tend to live the longest, with lifespans most frequently over 100 years. Remarkably low rates of heart disease, cancer, diabetes and obesity are also indicative of Blue Zones.

One common element of those living in the Blue Zones is a diet rich in legumes, as much as half a cup a day. Beans, peas and lentils (all legumes) are loaded with fiber, protein, complex carbohydrates, and a variety of minerals and vitamins. Legumes can be a great addition to any recipe, be it a salad, soup, stew, entree or vegetable dish.

Having cultivated and consumed dry beans for most of his life, grower Charley Baer has at least one foot in a Blue Zone. He has been wrestling with how to grow premium dry beans for a good part of his life and knows that a small operation with attention to detail is the road to success.

Baer started farming in the late 1970s, when it was popular to be part of the “back to nature movement.” He had a 200-mile commute between his home in Reading, Massachusetts, and a farm in central Maine. He helped neighbors Doug and Patti Qua with their yellow eye northern New England heirloom dry bean production for the local Maine market.

After leasing farmland for few decades, Baer finally bought an 80-acre farm in South Berwick, Maine. Now he plants about an acre each of 25 different varieties of mostly heirloom beans. He likes to collect unusual varieties of beans such as Marfax, which is most popular in Bar Harbor, Maine, where it is baked and used in soups.

Limiting production enables him to sell all he produces each season as fresh beans, and spreads out his labor since different varieties mature at different times.

He distributes most of the beans to stores and restaurants, They are priced at up to $4 a pound. Bean sales at farmers markets in winter bring between $5 and $7 a pound. Baer’s bean prices reflect that the products are premium dry beans, free of defects and debris.

Crop rotations are important for beans. Baer learned that continuous production of beans gave rise to root rot and white mold. In addition to crop rotations, he uses winter rye as a cover crop, when possible, in mid-October.

Half of Baer’s production is certified organic, which is rare for dry bean production.

As for the yields, Baer said: “It varies, but our average bean yield is about 1,000 pounds per acre. This is approximately 20 bushels. Modern varieties like black beans can yield over a ton per acre, but the heirloom types we grow do not.”

He learned the basics from the farmers in central Maine and worked with equipment from that area as well.

He doesn’t plant until early June. He doesn’t grow lima beans because “you almost have to transplant them in Maine.”

Weed control starts with a tine cultivator once the bean plants straighten up. This is followed with conventional cultivation with sweeps. Selective herbicides are use on the non-organic beans.

He fertilizes at planting time and side dresses the beans with a 10-20-20 mix. The organic beans get composted chicken manure.

The dry beans grow like green beans, only longer. Harvest takes place from mid-September through mid-October. At the shell stage, seeds develop and dry out, with maturation time depending upon the variety. Approaching maturity, the fields are scouted every few days. Baer said “when plants are yellowing off, and 80-90% of the seed pods are mature, then we begin harvest.”

Being gentle with the plants so the pods won’t shatter is the key to a premium product. Lost and shattered beans can’t be sold. Harvest takes place when the beans are at 15-20% moisture. In the past, Baer used his teeth to check moisture content; now he uses high-tech instruments.

The first step of the harvest is done with a tractor sporting two scythe-like knives, one on each side of a double row of beans at soil level to cut the tops from the roots. Then, a merger is used to create a windrow of several rows early in the morning while the dew is still on the plants, so that the pods will not rupture.

After some drying, a bean combine is used to separate the beans from the chaff. These combines are gentle with the beans so that product is not lost and beans are not fractured. When Baer started, he had an old Bidwell combine which took four hours to harvest an acre. Today, he uses a Lilliston edible bean combine that is four times faster.

Baer uses fans with no heat to dry the beans after they are harvested. They are dry by November.

There are three steps to the cleaning process. A seed cleaner is used in the first step to remove large and small trash. Then, a $10,000 gravity separator sorts dry, shriveled beans and debris of bean size; 10 percent of the harvest is lost at this point. Finally, Baer has a gentle mechanical sorting machine that enables workers to pick out beans that are deformed or stained. In fact, a partner, Rob Eckman, has modified a belt conveyer for handling beans gently. Conventional augers are tough on beans.

The beans are packed in 1-pound, clear plastic bags which show off the bright heirloom qualities of the beans.

“When it comes to lentils, we are not even close to being successful,” Baer said. “They barely mature and they like a dry climate. Chickpeas are difficult also because they have a paper-thin pod and are difficult to harvest.”

“A warm week of rain at the end of a season, associated with a tropical storm, can ruin the crop; beans will begin to germinate in the pod,” Baer said.

Baer believes that “being small-scale enables me to get it right. Growing, harvesting and processing efforts are centered on producing a fresh crop with brighter colors, better flavor, and higher nutritional qualities.”

Guy L. Steucek is a freelance writer who farms in Massachusetts and New Hampshire. He can be reached at guysteucek@comcast.net or 978-453-9982.