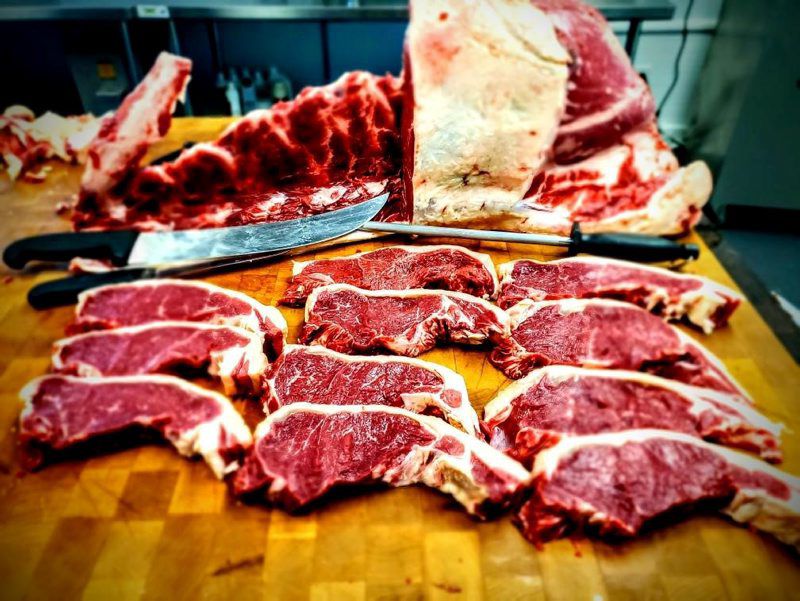 David Mills freshly cut these New York Strip steaks from the side of beef at rear; all Smoke and Pickles beef is 21-day dry-aged. 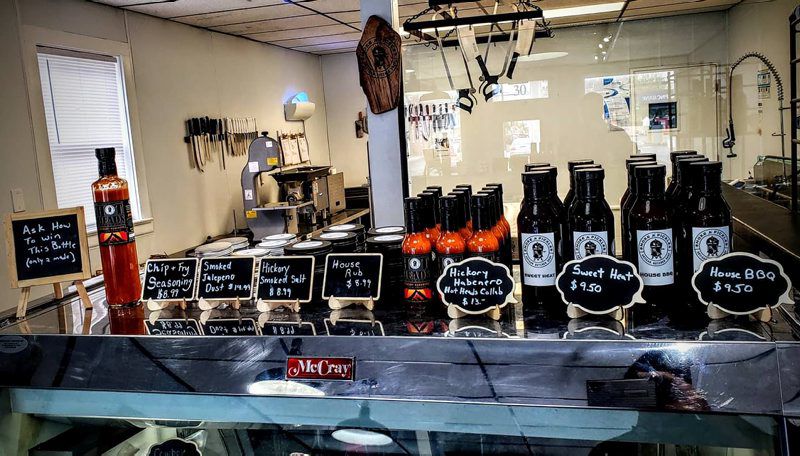 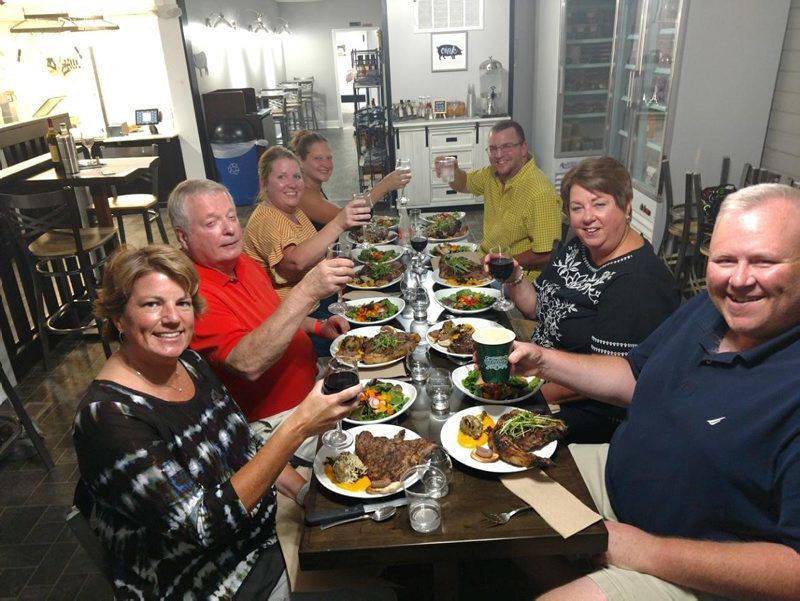 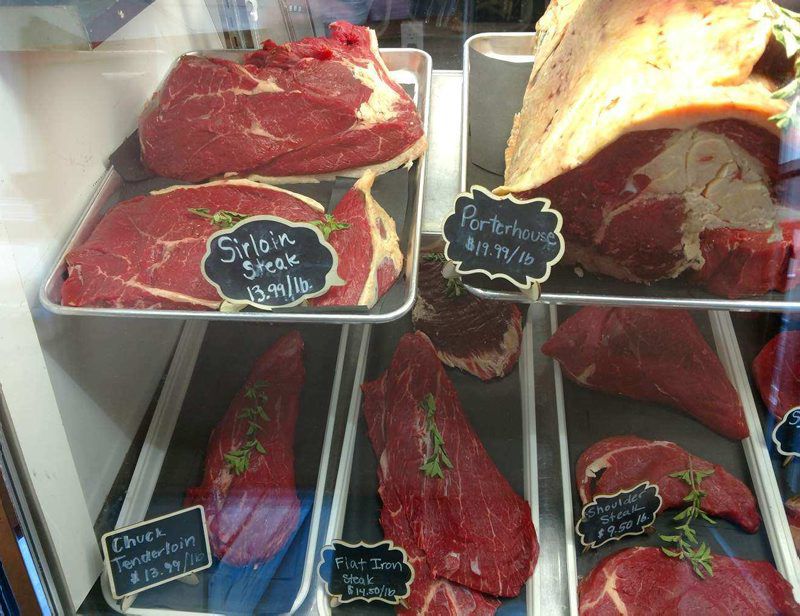 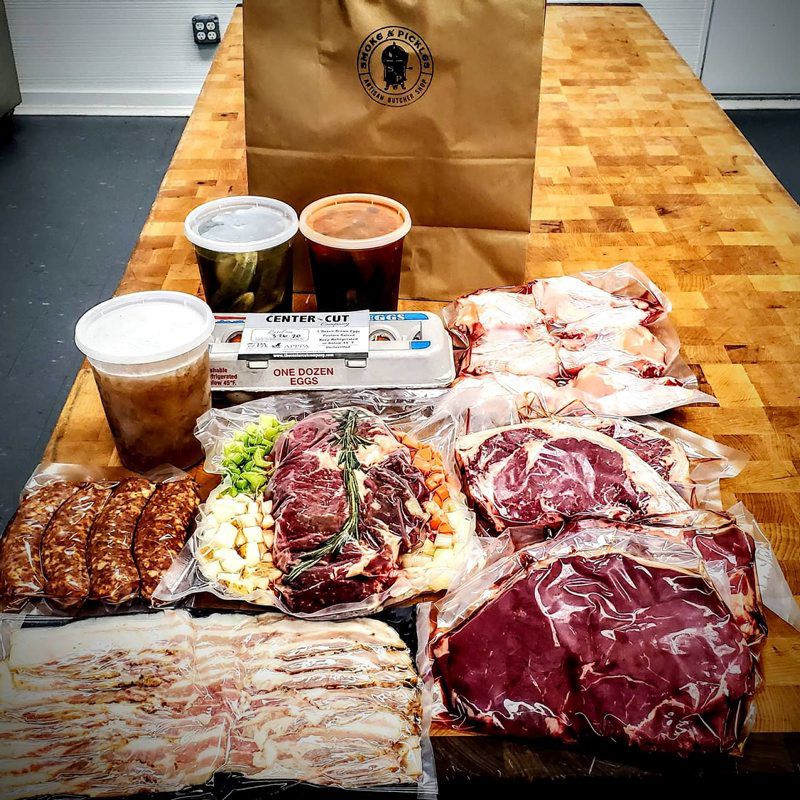 7 - This treasure trove is an example of Smoke and Pickles' CSA offerings. Note pre-seasoned pot roast in center of photo, topped by rosemary and accompanied by the fresh vegetables to cook with it. 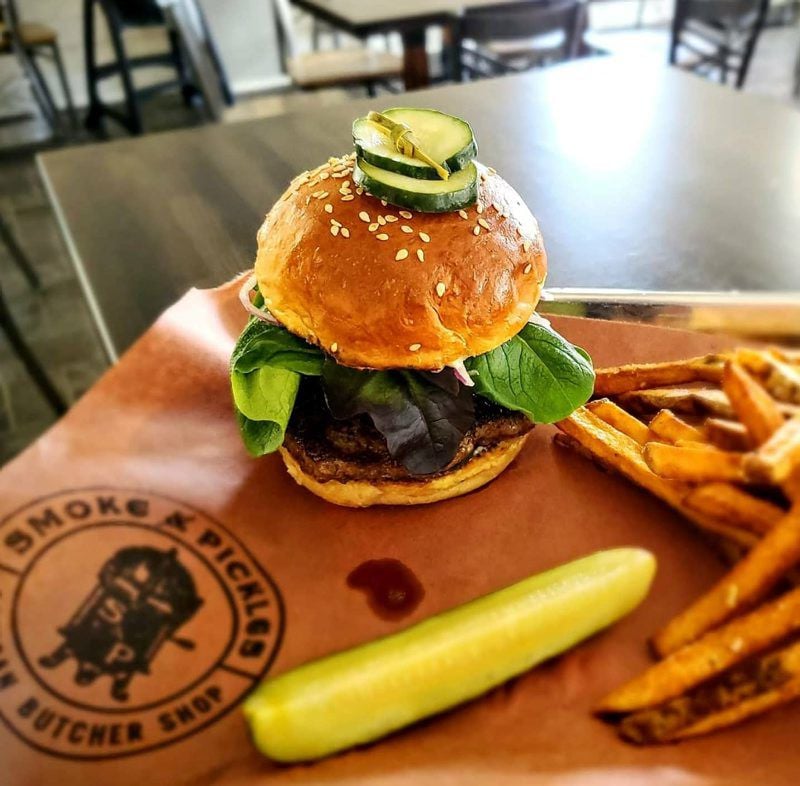 Smoke and Pickles' most popular sandwich, the Mechanicsburger, invites taking a big juicy bite. It's accompanied by their house fries cooked in beef tallow. 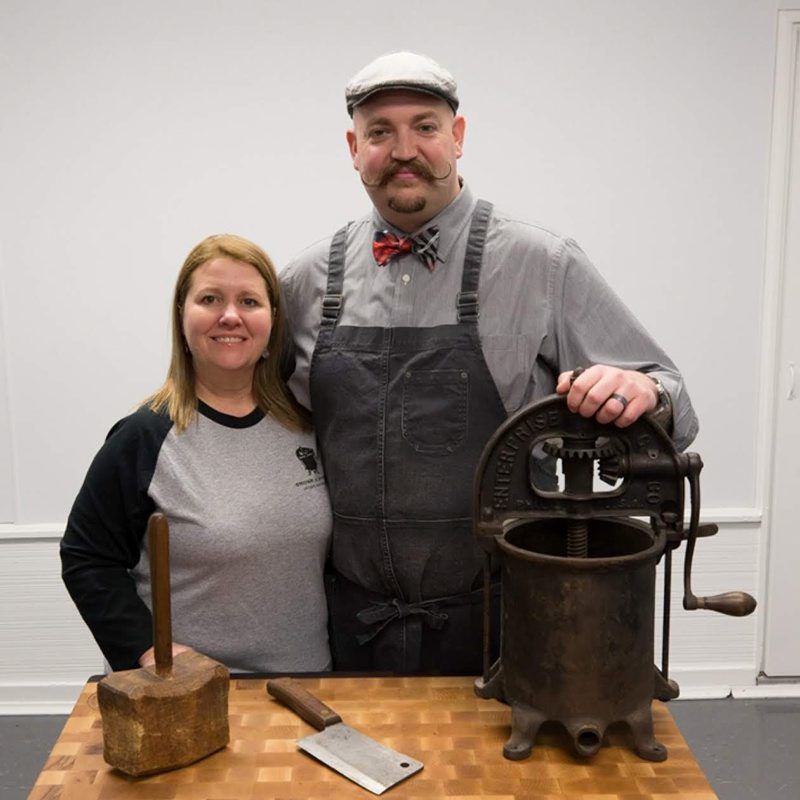 Photos provided by David T. Mills III/Smoke and Pickles Artisan Butcher Shop Kelli and David Mills pose with some of the tools of an artisan butcher's trade.

If you’re looking for beef cuts done the Old-World way, save yourself the price of a ticket to Europe. Smoke and Pickles Artisan Butcher Shop in Mechanicsburg, Pennsylvania, features a meat case stocked with cuts not often seen on this side of the Atlantic.

The business also includes a 32-seat restaurant serving up a menu to tempt any meat-lover’s palate, although during the current coronavirus pandemic, the restaurant menu items are only available as curbside pick-up orders.

The owner of Smoke and Pickles is butcher David Mills. He started out as a chef, which has given him a decidedly different perspective on meats. After working in kitchens at country clubs and other dining venues, Mills became a full-time culinary instructor at Harrisburg Area Community College, where his duties included leading student tours for a European culinary experience abroad.

During those tours of Italy, France, Spain and Portugal, Mills took note of the local butcher shops that he noticed were “everywhere.” He was impressed by meat cases that highlighted meats in eye-pleasing displays instead of overcrowding the meat products into cramped spaces.

Mills was further impressed with the “whole animal utilization” philosophy behind these butcher shops’ practices. He talked about how the Europeans have retained an Old World view of livestock. When an animal was no longer able to continue serving its original function, it was respectfully harvested and virtually every part of it was used.

These days, Mills practices whole-animal utilization in his butchering activities. The way he processes beef is an example of this principle.

“Nothing goes into the trash,” said Mills, who first breaks the animal into carcass, tongue, heart and tail. He then cuts roasts, steaks and also processes ground beef. When there is nothing left but bones, he cooks them to make bone broth and then the bones are placed into the smoker for eventual sale as dog treats.

The beef fat is rendered for use in the Smoke and Pickles fryer. Mills calls beef tallow “the healthiest fat,” stating that it’s a naturally occurring “real fat,” not hydrogenated or chemically altered. Mills uses the beef fat to make his restaurant’s house fries.

The fries are prepared with “real potatoes” fried in the fat to create tasty options like Smoke and Pickles poutine, chili cheese fries or Smoke and Pickles fries, which are topped with pulled pork or chicken, pickled red onion, jalapeno and a house barbecue sauce.

During one culinary tour through Italy, an acquaintance took Mills to a butcher shop and restaurant located in the hilltop hamlet of Panzano. He said the location’s great vistas also came with great food and an introduction to the shop’s owner, internationally known butcher, Dario Cecchini.

After remaining in touch with Cecchini, Mills and his wife, Kelli, went to see the famous butcher when he appeared at York, Pennsylvania’s Pullo Center in January 2018. During the presentation, Cecchini broke down a hog on stage. Watching Cecchini in action so inspired Mills that on the way home, he said to Kelli, “We’re going to open a butcher shop.”

And that’s just what the couple did a little over a year later. Smoke and Pickles opened its doors at 30 S. Market St., Mechanicsburg, in March 2019, and has quickly built a reputation for quality meats and first-class food in a casual setting. To complement its artisan meats, Smoke and Pickles’ rolls, sauces, rubs and pickled vegetables are all made in-house.

Mills said he built his business philosophy around Cecchini’s four basic principles for a successful butcher. It involves an animal which has had: a good life, a “good death,” a good butcher and a good cook.

All of the meats destined for Smoke and Pickles come from farms within a 40-mile radius of Mills’ Cumberland County establishment. He visits each farm where the beef, pigs or chickens he butchers are raised, and makes sure that they’re being raised to his standards, and are pastured and antibiotic free.

When it comes to beef, Mills isn’t partial to any particular breed.

“It just matters that they’re well taken care of,” he said.

His beef currently comes from three farms, where Angus is the predominant breed. However, one farm has Hereford cows bred with a Piedmontese bull, he said.

One of the farms has 80 beef cattle grazing on 110 acres. On one visit, Mills said that within five minutes of his arrival, he and the farmer were surrounded by the herd, with the farmer scratching his steers’ heads. That’s the “good life” he’s looking for, Mills added.

The farmers who provide his beef have their animals humanely harvested and then transport the carcass to Mills, who butchers one steer per week. If would-be customers say to him, “I don’t know why you’re so much more

expensive (than supermarket-bought meat),” he explains that his beef isn’t mass-produced.

Instead of the typical processing where beef might be slaughtered on the same day that the cuts are made and vacuum-packaged, Mills dry-ages the beef for 21-days. The meat loses water weight in the process, but the resulting beef is dense, tender and flavorful.

Mills takes pride in selling specialized cuts of meat such as the picahna steak — a single muscle out of the sirloin. Other uncommon cuts he sells include tri-tip, oyster and flat iron steaks, along with the Babette, a more tender cut from inside the skirt steak.

He pays special attention to the meat case appearance as well. Mills strives to “mix it up and dress it up” in the meat case, he said. For instance, he likes to display a shin steak with the top and bottom of the bone cut off, then split the shin to expose the marrow and tie rosemary to it. Tuscan burgers, with fresh garlic, rosemary and fennel seasonings, are customers’ grilling season favorites.

In the restaurant section, which generates 55% of Smoke and Pickles’ revenue, the “Mechanicsburger” is a best-seller. It features their own bacon ground in with the beef, served on a house roll with butter lettuce, garlic aioli, red onion and a fried tomato. Other beef sandwich menu offerings range from three other burgers to all-beef hot dogs, beef sausage and smoked beef brisket. “Meatloaf Smash” and smoked beef chili are also available.

The COVID-19 pandemic and stay at home orders have had some impact on his business, but Mills is pleased that he was able to keep all 14 of his part-time employees on-board without needing to do any layoffs. At first, restaurant business dropped off significantly in March, he said, but fortunately the butcher shop side of the operation picked up that slack; by early May, Smoke and Pickles’ business had rebalanced, he said, and was back to deriving slightly more than half of its revenues from the restaurant and the remainder from the butcher shop.

Both divisions of the business benefited from being able to offer curbside pick-ups, thanks to being able to rent temporarily three parking spaces from a business across the street.

Smoke and Pickles hosts special events, such as cooking classes, of which the most popular is “Date Night,” featuring a four-course meal. Before the pandemic, their “Brew, Chew and Chill” nights typically attracted 150 participants to enjoy off-menu specials, musical entertainment and beers from regional breweries.

Mills, who once studied and later taught brewing science classes, hopes one day to add a brewery to Smoke and Pickles’ operations.

For further information, go online to smokeandpicklesltd.com or call 717-795-4852. (Note: The butcher shop is currently open, but restaurant menu items are only available for curbside pick-up while Cumberland County remains under COVID-19 social distancing restrictions.)