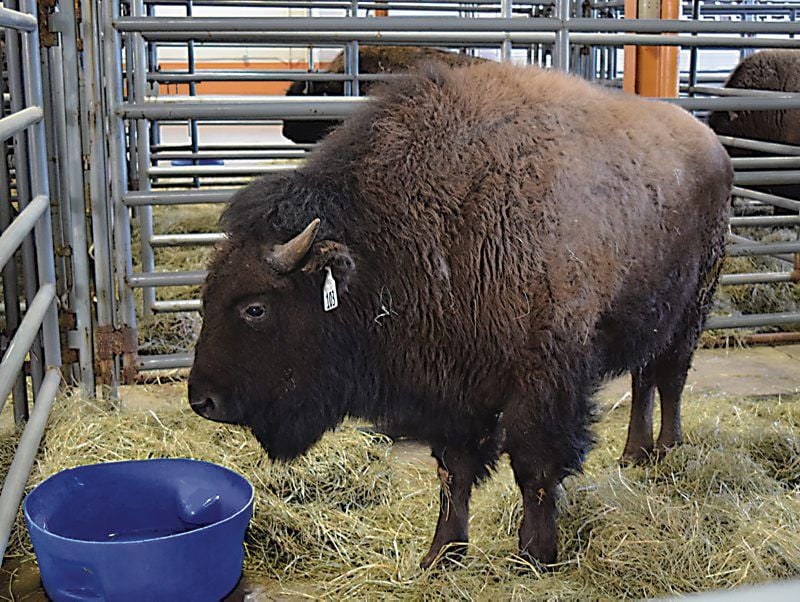 A bison stands in a stall at the Pennsylvania Farm Show Complex during the Eastern Bison Association's winter conference. 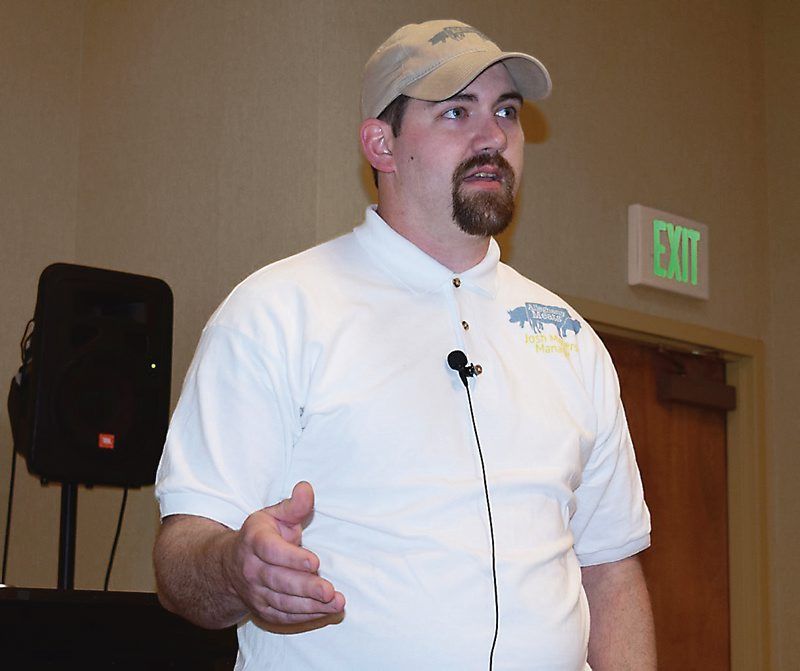 HARRISBURG, Pa. — Butchering a bison is a lot like butchering a steer, but the two species bring a slightly different selection of cuts to the dinner table.

Bison, especially big, old bulls, produce a hump roast, a cut of the powerful muscle that moves the head. You won’t find that on an Angus.

“Since you’ve got (a hump roast), you might as well try and sell it,” said Josh Moyers, general manager of Alleghany Meats in Monterey, Va.

Bison have one more rib than beef cattle, which slightly alters how they are cut, he said.

Moyers kills bison in a specialized chute that trailers can be backed up to. As more or less wild animals, bison tend to be more active in the knock box, or killing stall, than cattle are, Moyers said.

Moyers prefers to shoot the animals in the back of the head. Compared with the forehead, it affords a larger area to deliver a fatal shot.

“They don’t see you,” which calms them down, Moyers said.

Shooting the front of the head also leaves an unsightly hole in the skull, which some bison producers like to paint or bleach, Moyers said.

Moyers hangs the carcasses at 36 degrees F for 10 to 14 days, which results in less than 1 percent weight loss.

The carcasses can be aged longer, but then “you’re skinning the animal twice” because of the mold that grows on the surface, he said.

Besides the hump roast, bison yield the same types of cuts as a beef animal.

The filet mignon — “everybody’s favorite,” Moyers said — runs from the sirloin almost to the rib. It tapers from massive at the top to thin at the bottom, which can affect how farmers want it cut, he said.

As in a steer, the T-bone steak combines the filet mignon and New York strip steak.

Customers cannot get all three, though they sometimes ask for them. “Half the job is educating the public, and it never gets tiring,” Moyers said.

On the New York strip steaks, Moyers leaves no more than one-quarter inch of fat. Otherwise, restaurant customers feel ripped off, he said.

In place of the New York steaks, Moyers can cut a strip loin roast. It’s one solid muscle with the same grain, some fat and no gristle. It may be the best roast on the carcass, he said.

Moyers’ hint to the wise: Take the best part of the sirloin for yourself right after it comes off the grill, and let everyone else fight over the rest.

Ground meat is one of the most popular bison products. A single animal can produce 125 to 250 pounds of it, depending on how many different cuts the farmer wants, Moyers said.

In a 500-pound carcass that’s cut to maximize steaks and roasts, one-quarter to one-fifth of the carcass weight will be ground meat, Moyers said.

Though bison meat has a reputation for being lean, some farmers request bison burger with as much as 30 percent fat. The fat does not sell on its own, but the burger sells for $10 a pound, he said.

Moyers does not like to mix ground meat from multiple bison and only does it if the animals are from the same farm.

Some farms feed more grass or grain, and “I don’t want them getting the wrong thing,” he said.

There are two ways to make hamburger patties.

In plate packing, the machine forms the patty in a mold, then puts the patty paper under it. The patties are flash-frozen before packaging so the vacuum sealer does not distort the patties, Moyers said.

Moyers prefers to shoot the burger into a tube bag, freeze it, and slice that up with a band saw. There is a little waste that way, but each patty comes out the same thickness, he said.

As a custom butcher, Moyers makes some cuts that are not commonly seen in grocery stores.

The cross-cut shank, for example, is an unlikely delicacy.

Cut through the width of the lower leg, it contains a little meat and a lot of gristle. The bone is left in the middle of the cut.

From this combination, a nearby restaurant prepares osso buco and raves about the meat, Moyers said.

The petite chuck tender, which measures 7 inches by 2 inches and weighs about seven-tenths of a pound, is supposed to be similar in texture to filet mignon. Each carcass yields two.

“They take a lot of time and a lot of effort to dig out,” Moyers said, but he cuts them out a lot for customers.

On the shoulder blade lies another hard-to-extract cut, the flatiron steak.

The flesh there alternates between gristle and meat, so “you’ve got to trim it off layer by layer,” Moyers said.

One small mistake in the cutting process consigns the whole steak to burger. When things go right, “allegedly they plump when you cook them,” Moyers said.

A lot of customers ask Moyers to cut the three skirt steaks into fajita meat. They have a little fat but not a lot of gristle. They can be cut into long, thin strips, seasoned and put into 1-pound bags, he said.

For stewing meat, Moyers recommends the brisket or round. When a more delicate muscle like the New York strip is stewed, “it always seems to shrink up real bad,” Moyers said.

The eye round can weigh from 1.5 to 6 pounds, depending on the size of the animal. Not bad as a roast, the grain is rather tight for a steak.

If you have had a steak that you could never seem to finish chewing, it was probably a round steak, Moyers said.

He usually tenderizes round steaks before cooking them.

Out of old cows, Moyers cuts only the filets, New York strips and ribeye steaks. “Everything else goes through the grind,” he said.

In addition to their tough meat, old cows have yellow fat, which puts off some customers, he said.

Occasionally, even a young animal will also be tough, such as one 18-month-old bull Moyers butchered. “Every part of him was tough. The gravy was tough,” he said.

Moyers said he often calls his customers about tough animals, especially if the person wanted a lot of steaks. He does not want the end user to blame the farmer for selling a substandard steak.

Moyers sells all the hides from the bison and beef cattle he butchers to a middleman. Though salted beef hides are easier to come by, they command higher prices than buffalo hides.

“I didn’t believe it myself,” Moyers said.

At one point, bison hide prices got pretty bad, so Moyers donated 10 to an Indian tribe in South Carolina.

Four people can butcher a bison in two hours. One breaks down the carcass, one cuts steaks, one packs, and one makes burger, Moyers said.

This article has been updated to reflect Moyers' role as general manager at Alleghany Meats.