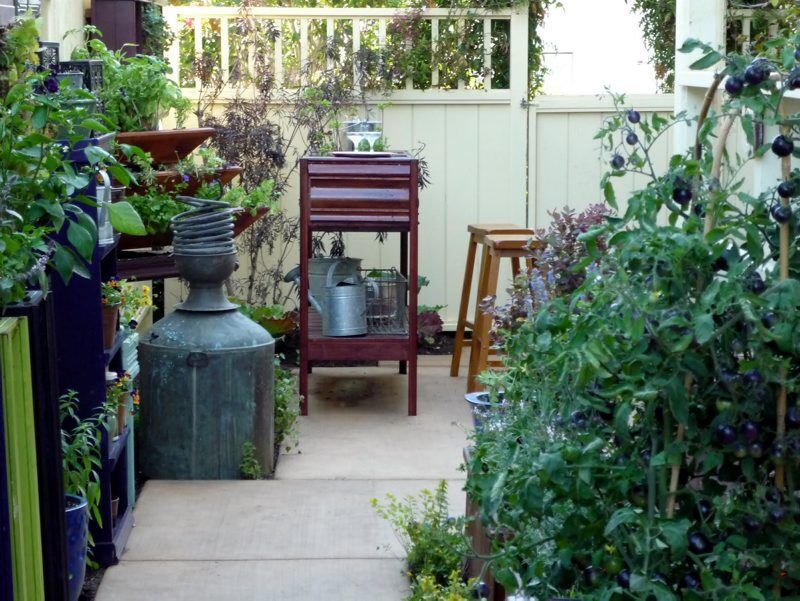 Stewart’s compact “cocktail garden” is just steps from her kitchen door, making it a convenient source for natural garnishes and ingredients to add to beverages. At left are parts of an old copper still. 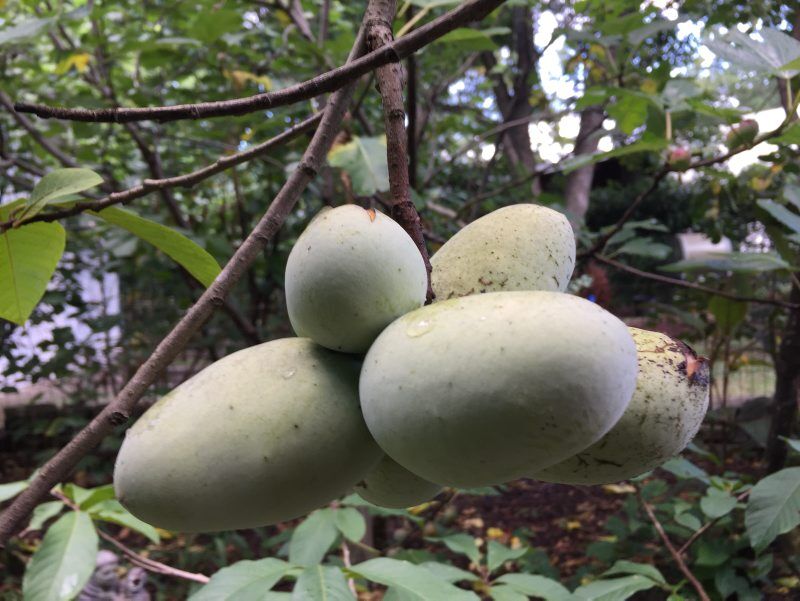 The paw paw is the fruit of a native tree which is deer-resistant and pollinator friendly; its unusual creamy texture and tropical fruity flavors lend themselves to making frozen paw paw coladas. 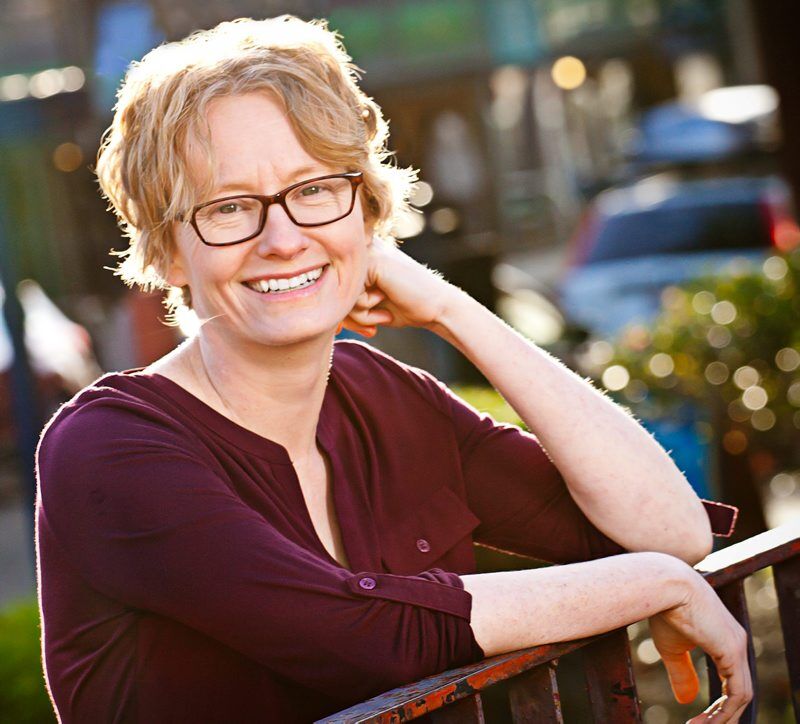 Amy Stewart is the author of six books related to the natural world, including the New York Times best-seller, “The Drunken Botanist.” She is also co-founder of the “Garden Rant” blog and a contributing editor at Fine Gardening magazine. 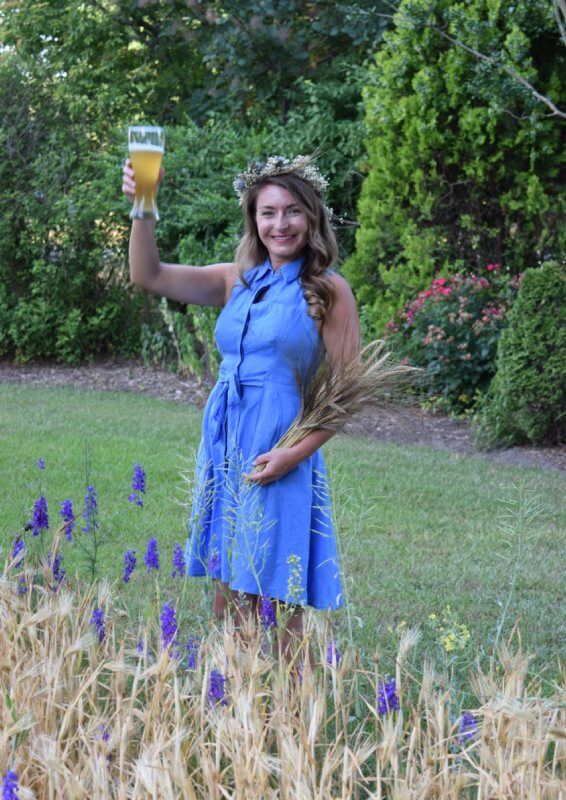 Brie Arthur is a professional horticulturist, lifelong gardener and author of two gardening-related books, who practices what she preaches from her home in central North Carolina.

What do a Penn State master gardener coordinator, a New York Times best-selling author, and a self-described “plant lady” from North Carolina have in common?

The three — Glenn Bupp, Amy Stewart and Brie Arthur, respectively — are all horticulture experts who also enjoy a good cocktail, wine, beer or hard cider, often incorporating ingredients from their gardens. Recently, they teamed up to share their expertise during a Penn State Extension webinar about “Spirits from the Garden.”

Stewart, author of “The Drunken Botanist, The Plants That Create the World’s Great Drinks,” explained that every bottle in a liquor store contains plants, be they fruits, grains, herbs or spices. That realization, she said, gave her the idea for launching a “cocktail garden” outside her kitchen door to grow a variety of fresh herbs, spices and fruits to accent the spirits she serves. In a garden like this, Stewart advocates “growing things you can’t find in your grocery store.”

Arthur, a gardener who has written “The Foodscape Revolution” and “Gardening with Grains,” couldn’t agree more with Stewart.

Picking the Right Plants for a Cocktail Garden

Improving Gardening Accessibility As You Age

During the webinar, both horticulturists talked about some of the plants and alcoholic beverages that pair together well.

Arthur first discussed pairing paw paw fruit with rum. The paw paw comes from a native tree that grows to be 20 feet tall. It thrives in zones 5a to 9a, with benefits that include supporting the zebra swallowtail butterfly and being deer resistant. She favors the Allegheny, NC-1, Sunflower and Susquehanna varieties, and said that paw paw trees are easy to establish.

Arthur said that the flavor of a paw paw is a combination of pineapple, coconut and banana flavors. Because this fruit also has an unusual, creamy texture, she recommends puncturing its skin with a fork, soaking it in rum and then freezing several of them before serving them as “paw paw coladas.”

The speakers then turned their attention to the history of rum. Stewart said that rum comes from sugar cane, which is basically an overgrown grass with lots of sugar in its stem. Each stem joint can root and make a new plant when it contacts the soil, and the cane’s sugar is necessary for nurturing these new plants.

During the rum fermentation process, yeast “eats” the sugar, creating alcohol and carbon dioxide. She noted that rum is aged inside barrels that previously held bourbon. Rum usually originates in the Caribbean, where heat and humidity hasten the aging process, so that a 2-year-old rum is equivalent to a scotch aged 10 to 12 years.

To partner with rum, Arthur suggested using strawberries, such as in a strawberry daiquiri. Aside from their exquisite flavor, strawberries are deer resistant, she said, and because they can tolerate partial shade, she likes using them as a groundcover around her blueberry bushes. To discourage voles, she then plants “hundreds of cloves of garlic” to line the beds. Of the many available strawberry varieties, Arthur prefers Albion and Chandler.

Since strawberries are not slug-resistant, gardeners with slug issues would be better off planting them in hanging baskets, Arthur said.

Glenn Bupp recommended day-neutral varieties of strawberries for hanging baskets, because they set and ripen fruit all summer long and don’t send out runners.

Stewart suggested preserving strawberries for beverages by making a simple syrup of equal parts sugar and water. Bring this mixture to a boil and then stir in a handful of cleaned strawberries. After blending or straining the mixture, place the syrup into a Mason jar, stir in a “tiny splash” of vodka and store in the freezer, she said. The sweet syrup will remain soft enough to easily remove spoonfuls for addition to drinks. She said this method works using other berries, too, as well as for herbal simple syrups.

Citing fruit from another native tree, Arthur next suggested that persimmons and bourbon are compatible, because any fruit that grills well to a caramelized state is “great with bourbon.” She suggested garnishing “a good sipping bourbon” with slices of grilled persimmon.

Elaborating upon barrel usage in the alcohol industry, Stewart said that bourbon starts out in brand new American oak barrels that have been charred on the inside to caramelize the wood, releasing vanilla flavors. Alcohol is a solvent which pulls molecules from whatever it’s next to, thus drawing the oaken vanilla into the bourbon. Stewart explained that a barrel originally used for bourbon might be shipped to the Caribbean to hold aging rum, then perhaps go on to Mexico for use in tequila aging, or transit the Atlantic Ocean to Scotland for scotch, or to Spain and Portugal for holding port and sherry. This barrel recycling added flavors from its predecessor spirits at each step of the way.

The topic then switched to gin, causing Stewart to state that “all gin is just flavored grain alcohol.” The juniper berry — a part of a conifer once believed to have medicinal value — has been the traditional flavoring for gin. However, she said that American gin makers want to get away from its “pine-y” flavor and are substituting other, more adventurous, flavors from fruits or herbs like lavender and coriander. Arthur pointed out that juniper makes an excellent landscape plant.

Arthur next turned her attention to hard ciders and the apples they are made from. She favors heritage cider varieties of apples, but noted that cider flavor typically depends less on the apples used and more on the type of yeast added to them to aid in fermentation. Arthur’s favorite cider apple variety is Grimes Golden from West Virginia, but she also likes Arkansas Black, Goldrush, Garrison and Roxbury Russet. She said that these cider apples can be grafted onto trees suitable in size for one’s garden.

Stewart said that cider is a good use for apples that are imperfect, adding that “the best ciders come from the worst-tasting apples.” She advised using a mix of apple varieties when making cider.

Their discussion then turned to “chill hours” — the number of winter hours below a certain temperature, usually 45 degrees, that a fruit tree variety requires for best performance. They said the local Cooperative Extension office is a good resource for obtaining this information when selecting varieties of fruiting plants suitable to a particular geographic area.

The prunus genus of plants includes almonds, apricots, cherries, peaches and plums. Stewart pointed out that this species of plants is “at the core of so many things we drink,” ranging from high-proof distilled brandies to light fruit “eau de vies.” She cautioned that the pits of all these stone fruits contain a bit of toxic cyanide and should not be consumed.

Arthur suggests caramelizing fruits of the prunus genus on the grill before adding them to whiskey and crushed ice to make a “whiskey crush.”

Stewart explained how to make homemade maraschino cherries. Start by pitting small, dark cherries, then cooking them on the stove with “a little water, a little sugar and a lot of cherry brandy.” The result, she said, is much better than store-bought marachinos for adding to your drinks.

Arthur’s parting words of wisdom were, “Grow what you use and plant them in convenient locations so you don’t need to put shoes on to get them.” Stewart’s suggestion was to “do a little experimenting and set aside a little area for a cocktail garden.”

More recipes and information can be found at https://drunkenbotanist.com or www.BrieGrows.com.

Columnist Joyce Bupp discusses the 2021 Herb of the Year, parsley, in this week’s On Being a Farm Wife.

Tips on keeping pests out of your garden using poison- and chemical-free methods.

Trendy Succulents: What Do You Know About Them?

Everything growers need to know about succulents, from care instructions to identifying popular varieties.