KUTZTOWN, Pa. — There is a distinct difference between farmers markets and produce auctions. If you have the responsibility of purchasing quantities of food for a restaurant, school, institution or business, it’s important to learn that difference early.

You can just ask the unsuspecting buyer at the Buffalo Valley Produce Auction in Mifflinburg, Pennsylvania, a few years back. He was excited when he for snagged a perfect 8-foot Fraser fir for the holidays at a price in excess of $50, only to learn that he hadn’t bought one tree but a lot of 50 trees.

To help acquaint buyers to produce auction sales and help auction management as well as helping sellers understand the importance of welcoming new buyers into the system, Penn State Extension ran a series of on-site produce auction tours and educational seminars during August. The audience for the tours were potential new auction customers, such as chefs, school and institutional buyers and customers making value-added products who buy fruits and produce to can and re-sell.

“There are 16 produce auctions in the state of Pennsylvania selling produce from some 5,000 growers,” said Becky Clawson, a Penn State Extension food systems and local foods educator. “They present a great market opportunity for growers, yet auctions can be intimidating for first-time buyers. We hope to change that going forward.”

In marketing the program, the Penn State Extension website described produce auctions as a staple of Pennsylvania’s agricultural marketplace and a win-win for farmers and buyers alike. Produce auctions have always been a conduit for Pennsylvania farmers — many from Plain Sect communities — to sell large quantities of produce from their farms for the last 36 years.

“Produce auctions can be good for both buyers and sellers, but only after you know the protocols,” Clawson said.

Together with her colleagues — Jeff Stoltzfus, food safety educator, and Brian Moyer, an education program associate — and with the support of a Specialty Crop Block Grant from the Pennsylvania Department of Agriculture, the team organized hands-on sessions at produce auctions in Leola, Oxford and Kutztown to introduce beginners to how auctions work and how to buy wisely.

“First-time auction visitors can be intimidated just trying to interpret the auctioneer’s chant to determine what he is selling and how much of it they might be bidding on,” Clawson said.

At sessions in Leola, attendees heard from auction manager Mike Snyder. In Oxford, they learned from auctioneer David Longenecker. In Kutztown they spoke with auctioneer Bill Meck.

Participants first got an overview of how produce auctions work and what to listen for from the auctioneer before the bidding actually starts. 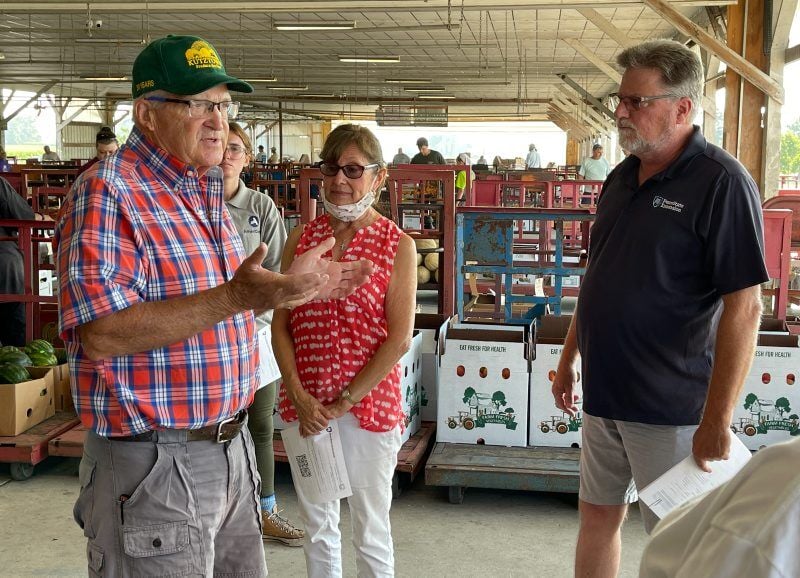 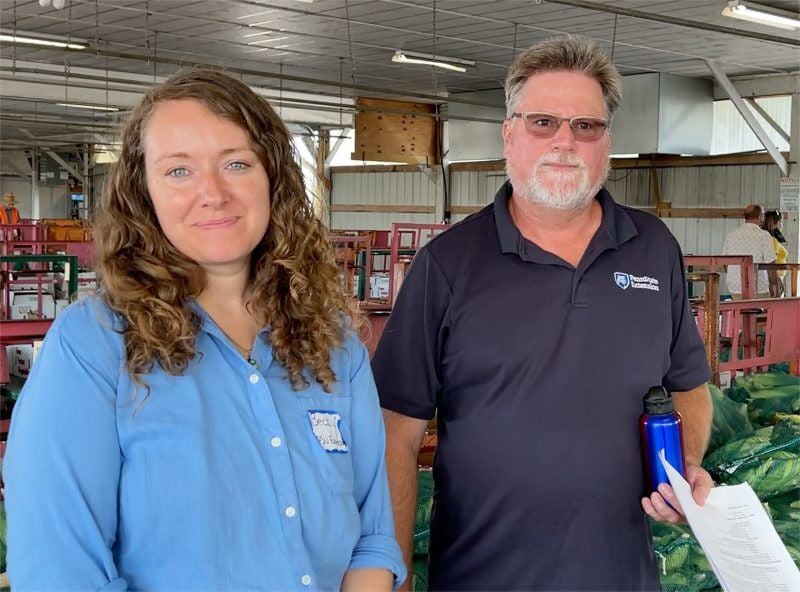 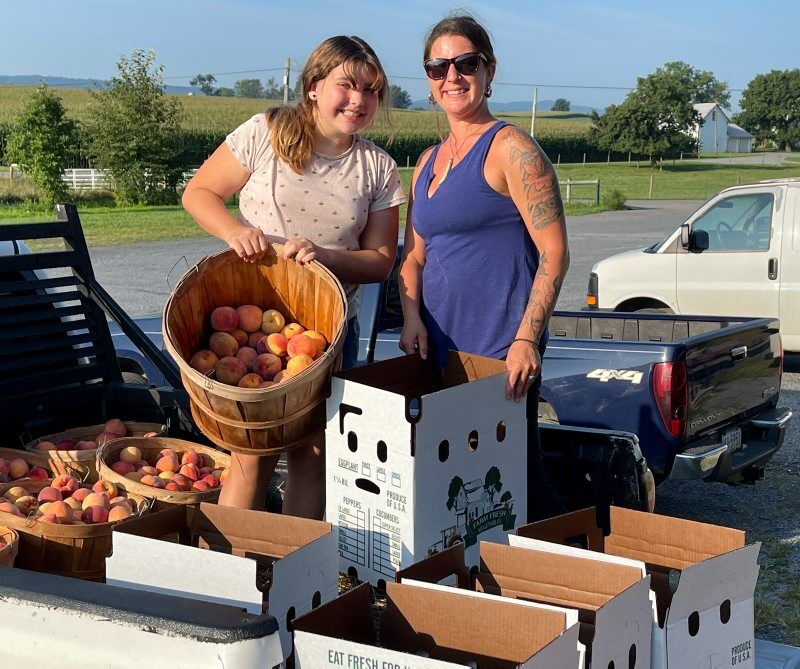 Grower Jessica Heinsohn, right, with her daughter Lacy, brings peaches to the Kutztown Produce Auction from their farm in Bangor, Pa. 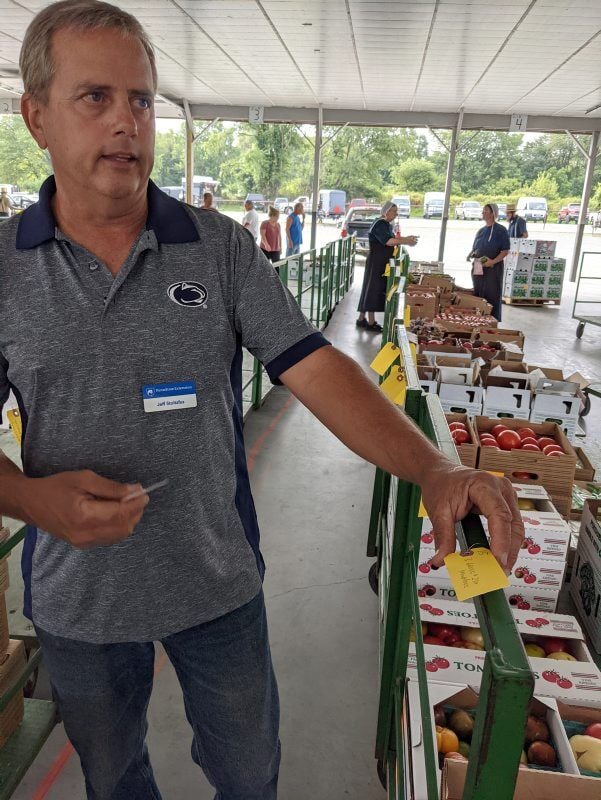 Watermelons on a wagon are delivered by tractor to the Kutztown Produce Auction in late August. 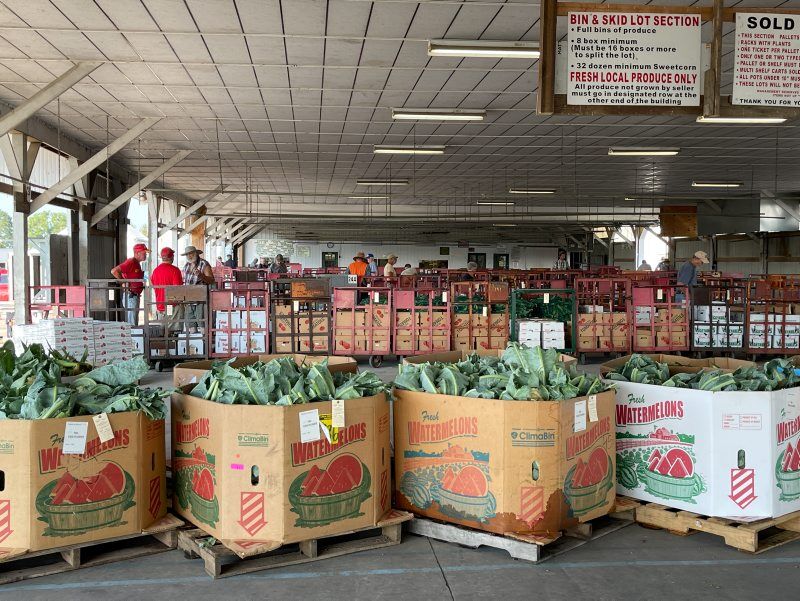 Grower Jessica Heinsohn, right, with her daughter Lacy, brings peaches to the Kutztown Produce Auction from their farm in Bangor, Pa.

Watermelons on a wagon are delivered by tractor to the Kutztown Produce Auction in late August.

“We moved around the auction and watched different items being sold,” Clawson said, “and also got a chance to meet and talk to some of the growers who were bringing fruits, vegetables and flowers to the site, most of whom had been selling at auction for years.”

Attendees at the Kutztown Produce Auction session included Tina Amato, a nutritionist from the Allentown Health Department, and Susan Dalandan, coordinator at the Lehigh Valley Food Policy Council. Both felt they were conduits to others in their communities learning about food accessibility and were helping to provide a map for local food systems. They were anxious to learn about produce auctions and protocols.

Jessica Heinsohn, owner of Heinsohn Farms in Bangor, was unloading baskets of freestone peaches on the loading dock at Kutztown Produce Auction, while Meck welcomed the Penn State Extension group. Heinsohn was excited to learn about the program and the prospects of new buyers joining the veterans at auction sales.

Meck, a veteran auctioneer, took time to de-mystify the bidding process for seminar participants. He said the auctioneer is not calling out an accepted bid, but asking for a higher bid on the produce, usually in increments of 25 cents and is doing it quickly.

“Remember,” Meck said, “most times your bid is for the lot of produce or fruit — not just one box or case. So, if you win the bid at 50 cents for seedless watermelons, you have purchased a lot that may be several boxes each with 40 or 50 watermelons.”

He continued, “It is important to listen closely to the auctioneer explain the lot quantity before he starts the bidding.”

Quality is important for both the farm growers and auction management.

“For buyers, the produce you bid on,” said Clawson, “is right there for you to inspect before the auction starts. And, many buyers arrive early to do just that and look for fruits and vegetables from growers they have bought from in the past.”

More than a dozen men and women took part in the sessions. The participant reaction was positive. Scott Megill, the corporate chef at the Willow Valley Communities in Lancaster attended the Oxford event.

“I’ve been at produce auctions in the past,” Megill said, “and never felt comfortable enough to make a purchase. The Penn State Extension program was very informative, and I now understand the system. And, although we already work with a farm co-op for some of our produce, I look forward to supplement that, going forward, with purchases at local produce auctions.”

Clawson and her colleagues also felt the sessions helped build a relationship between sellers and buyers, and provide a better understanding of the needs of each. Clawson and Stoltzfus recently published “Eight Tips for Buying at the Produce Auction.” Clawson, Stoltzfus and Moyer also published a second online article on the subject, “Benefits of Buying at the Produce Auction."

In the article, they point out that farmers have a number of options to selling their products, ranging from direct-to-consumer outlets like farmers markets or community supported agriculture, or CSAs, both programs that may bring them the best price, but also are labor intensive as are self-marketing wholesale or to restaurants.

But, Clawson said, “Produce auctions provide a one-stop outlet for farmers that allow them to spend less time searching for buyers and customizing orders, and more time doing what they do best: farming.”

The Extension educators said that auction produce quality is usually excellent, because each lot is traceable back to the grower, who has his or her reputation on the line. And, for many produce farmers, the auction is their primary market outlet.

A New Holland produce farmer who sells wholesale exclusively, mostly through produce auctions, said that growers need to be into selling long-term at produce auctions. He said 2020 was an outstanding year for sellers because buyers were looking for fresh, farm-to-table produce during the COVID-19 pandemic, almost at any price.

In 2021, he said, he had a great growing season for fruits and produce, but it has been almost too good — with an over-abundance of similar produce at an auction, prices get depressed. However, over time, he said, it all evens out and is easier than setting up a retail operation.

The family-owned Lebanon Auto Auction has been auctioning cars once a week for the past two decades.

There was no shortage of pumpkins to purchase for the fall and Halloween season recently at the Buffalo Valley Produce Auction in Mifflinburg, Pennsylvania.