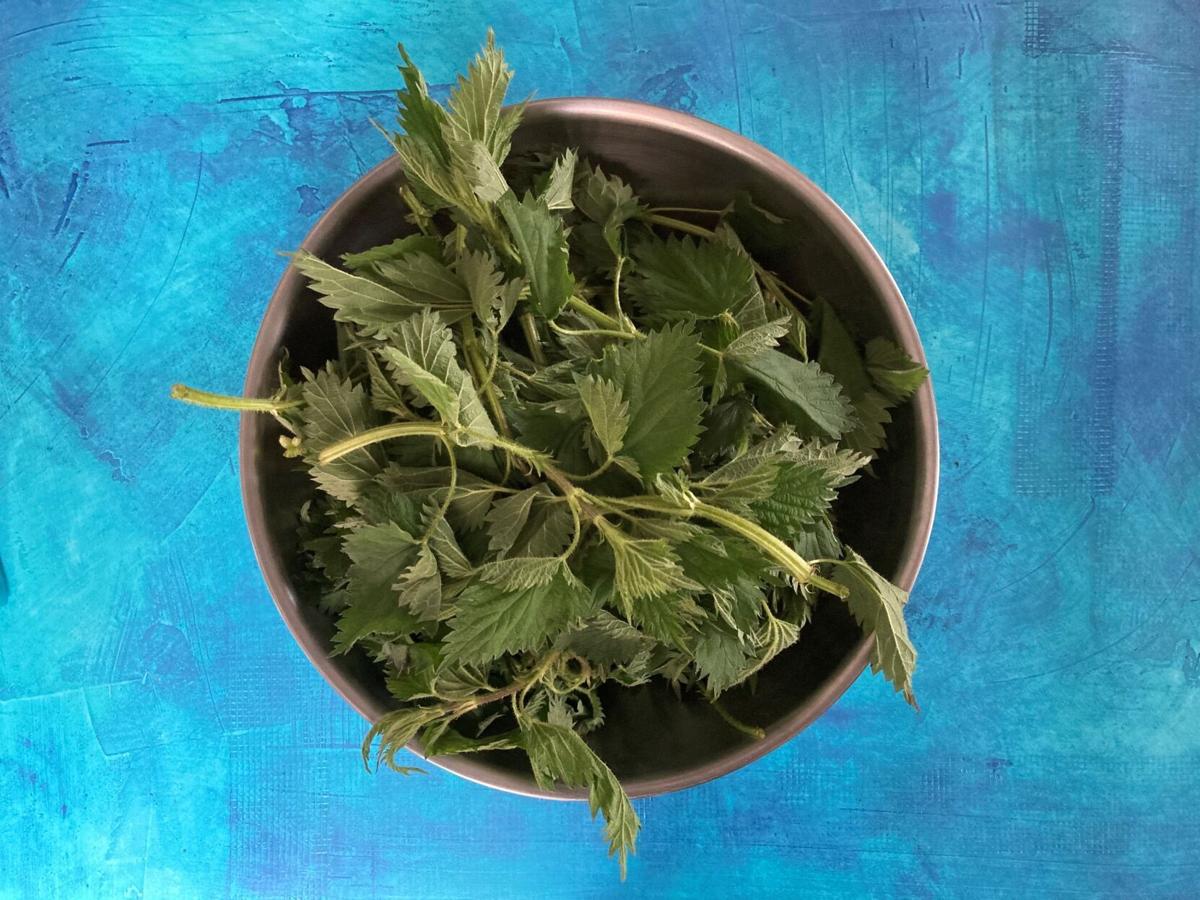 A perennial herb that grows in woodlands and along rivers and streams, stinging nettles are among the first edible signs of spring. 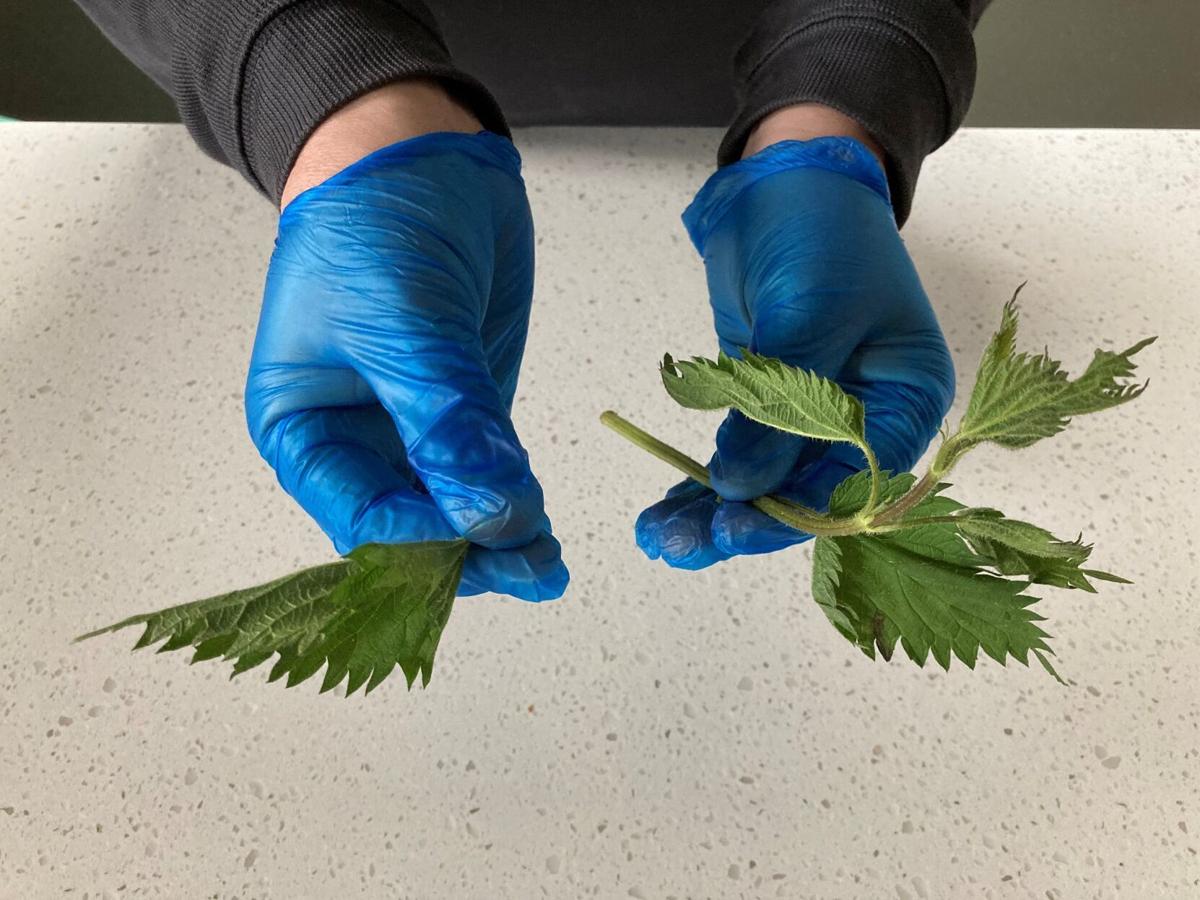 The notorious sting comes from invisible prickly hairs located on the stems and the underside of the leaves that can be irritating, so I highly recommend wearing gloves while washing and prepping. 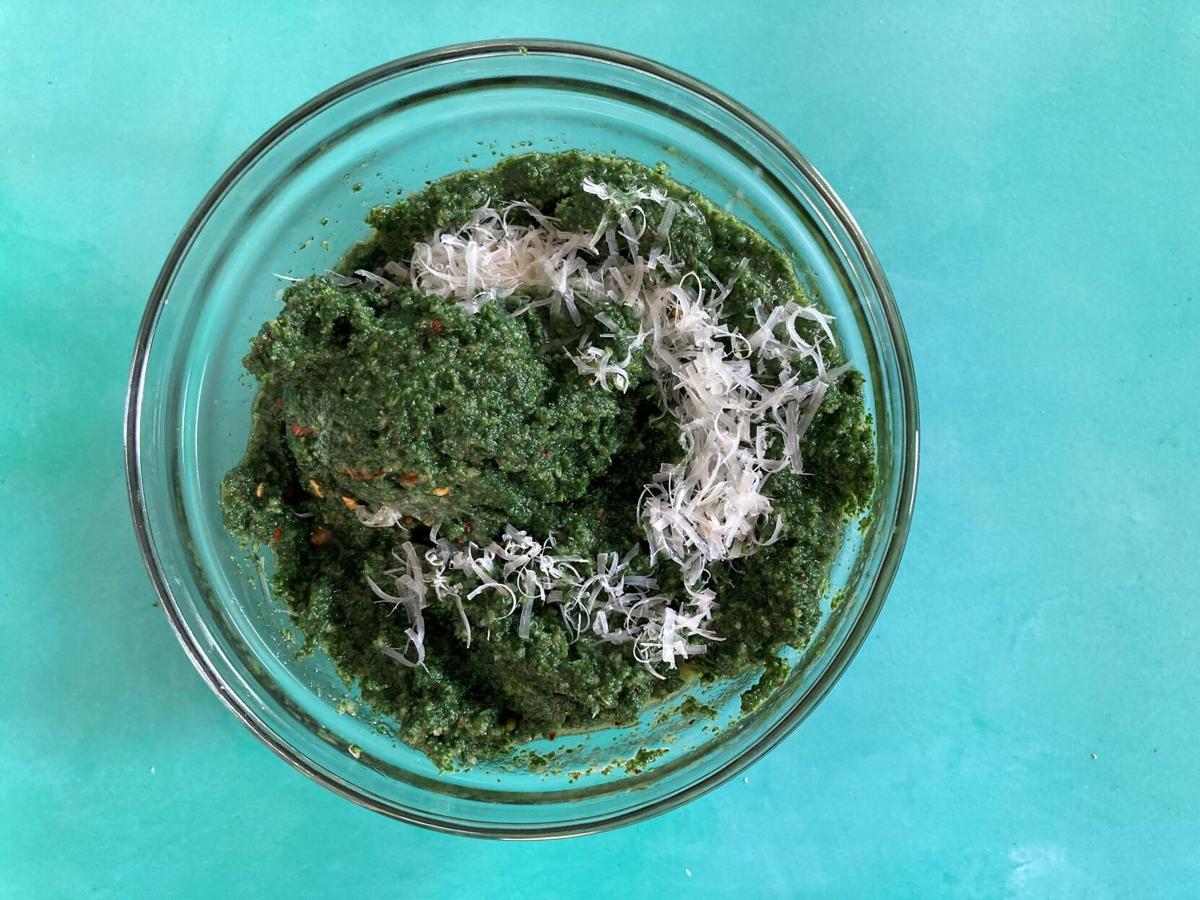 Nettle pesto with grated pecorino is worth putting on gloves for. 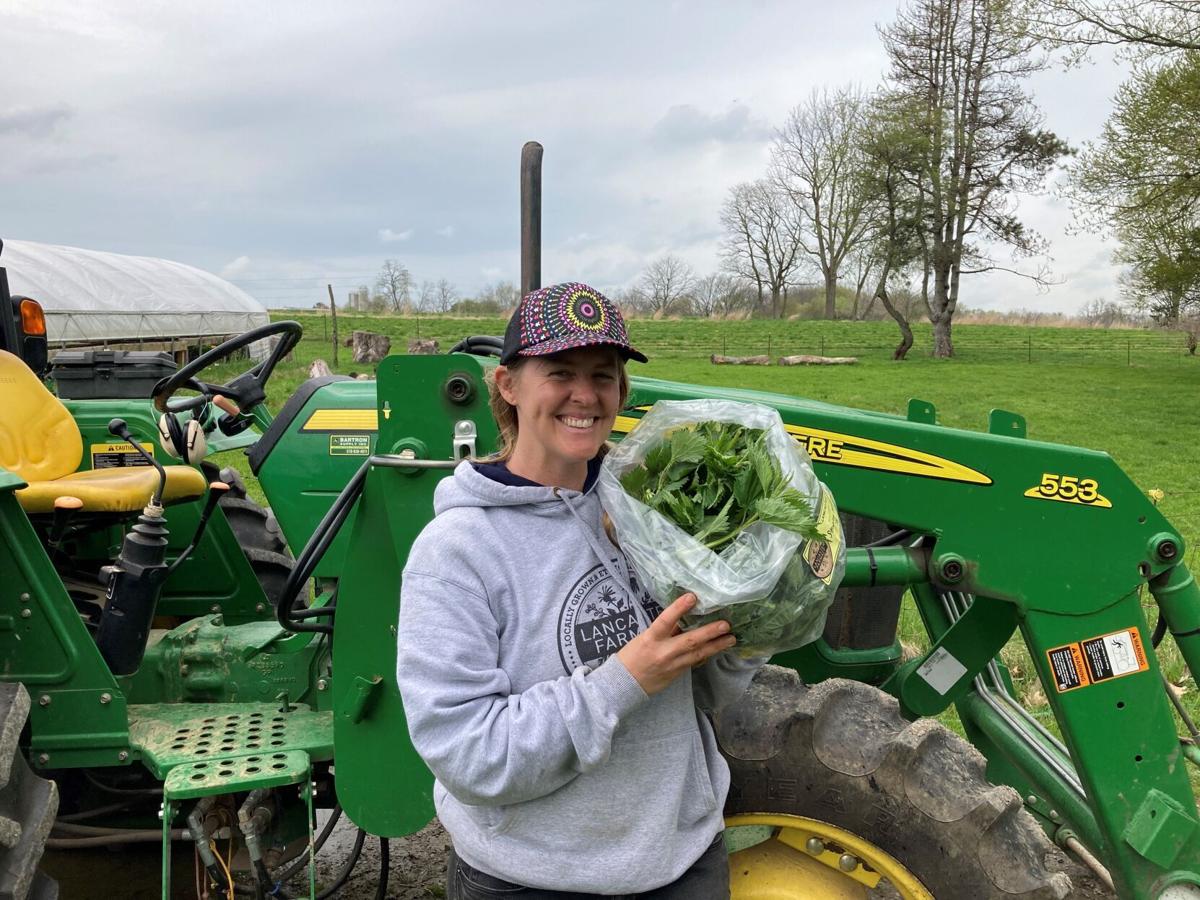 Elisabeth Weaver with a bag of foraged nettles at Lancaster Farmacy's farm in East Lampeter Township.

A perennial herb that grows in woodlands and along rivers and streams, stinging nettles are among the first edible signs of spring.

Nettle pesto with grated pecorino is worth putting on gloves for.

Elisabeth Weaver with a bag of foraged nettles at Lancaster Farmacy's farm in East Lampeter Township.

In Latin, she goes by Urtica dioica, but you may know her as "stinging nettle." The word "stinging" can be a bit of a turnoff, especially in the kitchen.

I urge you to get over it, as I did more than 20 years ago, because the gastronomic perks far outweigh this temporary obstacle. Nettles make fabulous pesto.

The sting (more like a mild irritation)  is a thing only when the leaves are raw. A pair of disposable gloves will keep the invisible stinging hairs at bay, and once the nettles are cooked, the sting disappears. Poof, goodbye.

A perennial herb that grows wild in woodlands and along rivers and streams, nettles are among the first edible signs of spring.  They are exceptionally nutrient dense, packing fiber, protein, iron and calcium, to name a few, plus disease-fighting antioxidants in the form of carotenoids. They offer antihistamine and anti-inflammatory support, which makes them great food during seasonal allergy season. (And it bears repeating -- they make fabulous pesto.)

My maiden voyage with nettles was in the Piemonte region of Italy, where I was a culinary student in the spring of 2000. Chef Sergio tasked me with preparing risotto for lunch, using nettles that had been picked along the perimeter of the school property. I can hardly remember if I wore gloves while plucking the leaves from the stems, but the intense double-spinachlike earthiness -- that I remember like yesterday.

It would be several years later when nettles and I got reacquainted, thanks to a passionate forager named Eric who moonlighted at a used bookstore in our Seattle neighborhood. Without him, I am not sure I ever would have gotten to know — and love — nettles as much as I do or learn about other foraged jewels like fiddlehead ferns and lamb’s quarters. In fact, having a local forager on speed dial made it possible for me to develop recipes for my 2017 cookbook, “PNW Veg.”

A few years ago at this time, I was headed East for a cookbook event at a restaurant in Brooklyn. A cold spring there had delayed the arrival of nettles, which meant that if I wanted nettle pesto on my menu, I needed to travel with them. At the 11th hour, Eric hooked me up with two pounds of freshly foraged nettles, which amounted to two grocery store-sized plastic-handle bags. The aroma was pungent in a “who’s been smoking marijuana?” sort of way; it was so strong, in fact, that I decided to carry the nettles on board with a note on top that screamed STINGING NETTLES in all caps. I had nothing to hide, but I did chuckle as I placed my highly aromatic backpack on the conveyor belt for screening at the TSA checkpoint. My red-eye flight was uneventful, and we all arrived in New York in one piece (and nettle pesto was on the menu the next day).

Last spring was our first here in Lancaster but due to the pandemic (and no local foraging connection), we had nary a nettle. Now, two local foragers -- Elisabeth Weaver of Lancaster Farmacy and Alex Wenger of Fields Edge Research Farm -- are on my VIP list (along with the mechanic and gastroenterologist), making life a little bit more chlorophyll rich, stem by stem.

1. Prep the nettle wearing a pair of latex or rubber gloves. Separate leaves from stems and place leaves in a large bowl (and discard the stems). Rinse leaves a few times or until the water runs clean. Drain and set aside.

2. Bring about 4 cups of water to a boil. Add the leaves and return to a boil. Cook for 2 minutes. (It’s now safe to remove gloves.)

3. Drain leaves and run under cold water until cool to the touch.

4. Using your hands, squeeze out as much water as possible. You will end up with a remarkably small and shrunken green ball.

5. In a food processor or high-powered stand blender, process walnuts, garlic and salt until ground. Add the nettle ball and the oil and process until very well blended.

6. Transfer to a bowl and stir in cheese, if using. Stir in the red pepper flakes and taste for salt, adding more as needed. Add a few pinches of nutmeg, stir and taste (it brightens the flavor).

7. Store in an airtight container in the refrigerator. Keeps well for up to 1 week.

How to use nettle pesto

4 ways to use in-season fresh spinach, from risotto to pancakes [recipes]

Thanks to a recent stretch of mild sun-filled days and cool nights, fresh spinach is back in town. These early weeks of spring have been extremely welcoming to my backyard seedlings, now about an inch high. In the meantime, I’m turning to several local growers with the leafy goods, and I cannot get enough. I’m not talking about the triple-washed baby spinach in oversized clamshell containers, but instead big sandy bunches fastened with a rubber band and in need of a really good rinse. Spinach that tastes like it means it.

11 CSA programs to join this spring for local produce, meat, flowers and more

In these early weeks of spring, local farmers are way ahead of us mere mortals who like yours truly might still be perusing seed catalogs. And as they tend to their seedlings and gear up for spring and summer harvests, farmers across the county are counting on us to express our appreciation — for the indigo blueberries and foraged mushrooms and marigold-colored egg yolks and gorgeous lettuces and juicy cucumbers — by opening our wallets.

For the first and second installments of this curry miniseries, we featured saucy (and maybe even slurpy) variations on the theme. In other words, a palpable gravy quotient that, if you really wanted to, you could drink the gravy. For Americans who learned to eat curry in Indian or Thai restaurants, saucy curries are the likely default, from Indian chicken tikka masala and lamb jalfrezi to Thai green curry shrimp and panang curry beef, wading in a pool of spiced coconut milk.

5 local plants to safely forage and cook this spring

Your backyard vegetable garden may be weeks away from its first harvest. But if you’re game to travel and work for your salad, an edible plant party awaits in local woodlands.