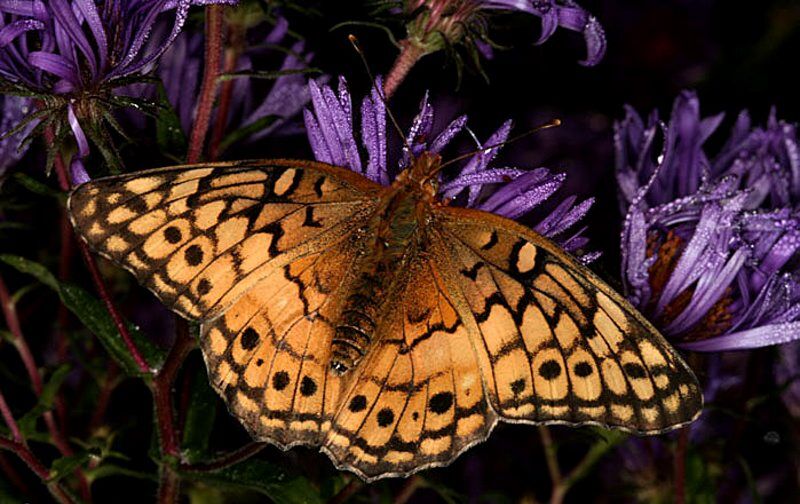 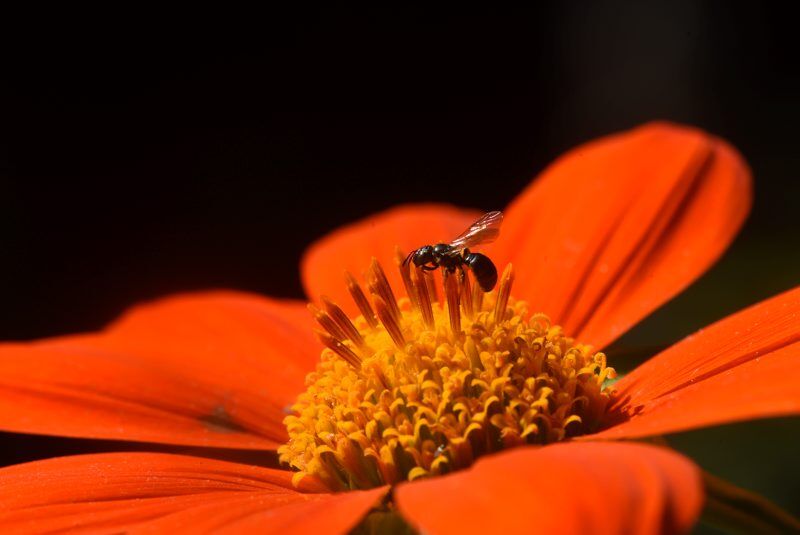 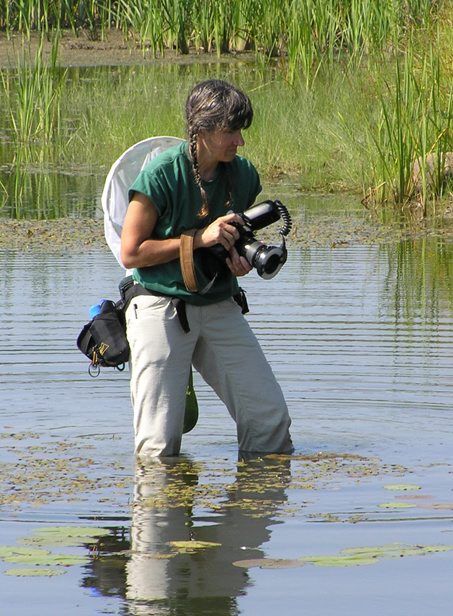 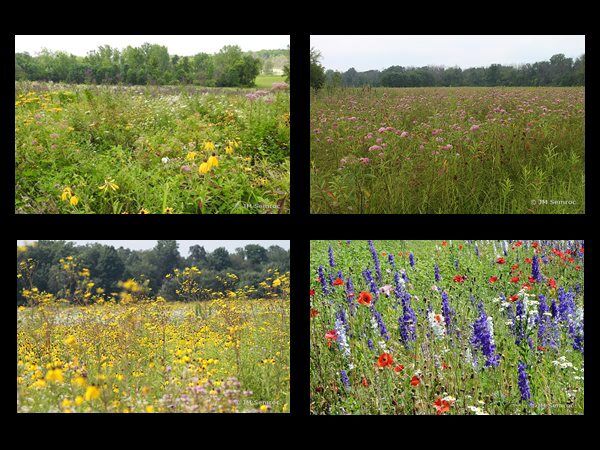 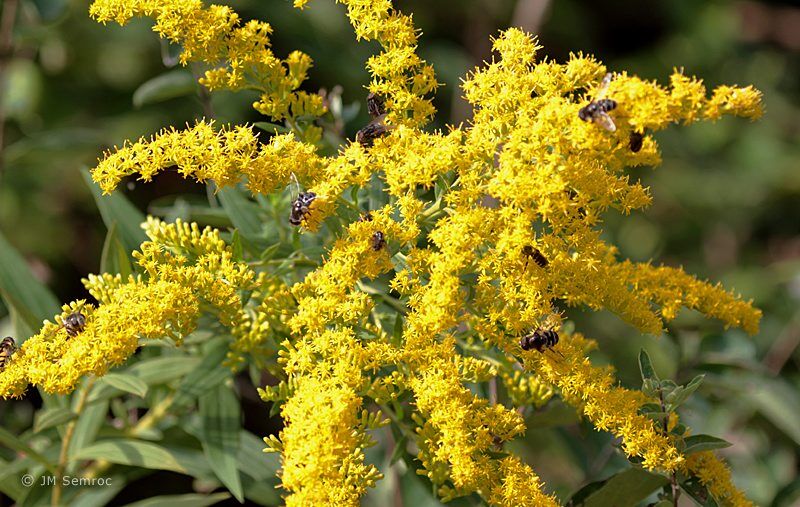 Late summer and fall plantings are of key importance for birds and insects, says Judy Semroc, a conservation specialist with Ohio’s Cleveland Museum of Natural History, who recently presented a webinar as part of Butler County Penn State Extension’s fall garden seminar. Semroc said that some of the best plants, with high pollen-nectar contents for attracting pollinators and aiding migratory species at this time of year, don’t get much respect.

That’s because they are actually weeds. She listed jewelweed, sneezeweed, milkweed, ironweed and Joe-Pye weed among the plants with a weed’s bad reputation that shouldn’t overshadow their benefits to autumn’s insects and birds. Berry or fruit-producing weeds like pokeweed also deserve credit for persisting into winter, when birds are most in need of food sources.

Semroc thinks of these and other late-season bloomers as potential “gas stations” for the coming waves of migrating species in search of fresh nectar, fruit and seed supplies. She suggested deadheading flowering plants, for instance, to induce new blooms with nectar in autumn — thus providing monarch butterflies and hummingbirds with energy to fly their routes. Meanwhile, bumble bees and honeybees, as well as overwintering butterfly species, need nectar in the autumn to survive the winter in their hibernation phase.

Late-blooming plants are also important for insects like flower flies, moths and grasshoppers, which will become food for species above them on the food chain. Fall plantings help make up for other deficits in the environment caused by herbicides, pesticides, drought, over-mowing and habitat loss.

Semroc said that not all plants should be deadheaded during fall. Those such as goldenrod and native grasses should be left to go to seed so that winter birds can feast on them in the cold months ahead.

Studies are finding that some insect species are moving into new areas as climate change displaces them. Warmer temperatures are forcing some of them northward to cooler climes, and Semroc said that, as this occurs, the plants they feed on are also heading north. This is causing some non-native species of both flora and fauna to turn into “new natives” for a region.

Semroc said that not all nectar is created equal. She described specific qualities of nectar and its effects on the species that consume it. Sugar concentration, nectar volume and nectar protein composition all play roles for which flowers are the most attractive to pollinators.

Semroc went on to discuss another plant with a negative reputation. While goldenrod often gets the blame for allergies, she noted that ragweed is the real culprit. One reason she cited for goldenrod’s innocence is that its pollen is too heavy to be transported by the wind, and thus it must rely on pollinators to carry its pollen from plant to plant. Surprisingly, goldenrod, with its 1,000 tiny flowers produced on a single plant, is actually a subcategory of the sunflower family.

With over 30 varieties in Pennsylvania alone, goldenrod serves a valuable purpose as late summer and early fall nectar food for migrating birds and insects. Migrating monarchs and hummingbirds rely on it and honey bees need this nectar for the honey production that will carry them through winter. Bumble bees are also heavily reliant on goldenrod to stay alive through the fall. Semroc explained that, when winter arrives, the goldenrod’s seeds are a valuable food source for birds like chickadees, juncos, finches and sparrows, as well as for small mammals.

Goldenrod’s other key role is as a provider of food and shelter in the life cycles of many insects, Semroc said. Bumble bees take shelter under its stems overnight, while moths, butterflies, wasps, beetles and Pennsylvania leatherwings partake of its nectar by day. Goldenrod also fosters predator insects like praying mantises, spiders and true bugs, whose camouflage allows them to provide biological control for garden pests like aphids.

While goldenrod can be a major boon, it can also become quite invasive, depending on its variety. Zigzag goldenrod, which grows to 2 or 3 feet in height, is a good choice because it spreads slowly via rhizomes. Conversely, tall goldenrod, which reaches 3 to 6 feet, is an aggressive variety which can help crowd out unwanted plant species, but can thwart desired ones, too.

Semroc sang the praises of the aster as another important late-season pollinator plant that is a favorite of monarch butterflies. With their relatively high sugar content, asters are a better choice among autumn blooms to plant than the more popular chrysanthemums. New England asters are known for attracting a range of pollinating species including bees and butterflies, with the pearl crescent butterfly known to use it as a host plant.

Other aster varieties that also attract pollinators include the purple-stemmed aster, the white wood aster and the flat-topped aster, which is specifically noted as the food plant for the Harris’ checkerspot, a rare butterfly, which was almost decimated during gypsy moth spraying in years past.

Semroc wrapped up her presentation by saying that diversity of plant species is a plus for attracting pollinators, especially when they provide a range of blooms from spring through fall frosts. She then provided lists of the most important pollinator plants.

Top perennials include great blue lobelia, which thrives in wet environments; anise hyssop, a member of the mint family popular with bumble bees and flower flies; turtlehead, another bumble bee favorite and also larval host for the Baltimore checkerspot; and herbs like garlic, chives and borage.

Among the annuals that draw in pollinators, Semroc called out Mexican sunflower, which blooms up to the fall and has a bright color attractive to hummingbirds and butterflies. Purpletop vervain is beloved by migrating monarchs. Jewelweed attracts spring peepers and tree frogs. And, bright-colored zinnias are long-lasting and plentiful in both nectar and pollen.

Semroc suggested planting a border of zinnias and borage around gardens to signal pollinators to drop in.

In Semroc’s closing comments “to ponder and possibly act on,” she lobbied fans of pollinators and migratory species to consider switching to “no mow lawns” as a way to foster more eco-friendly landscaping choices. Using rocks, clovers, herbs, mosses and other short, beneficial plant species not only offers less work and cost for property owners, but also protects the food chain and groundwater from the ill effects of fertilizers, herbicides and pesticides, she said.

A hobby beekeeper discusses the benefits and challenges of keeping the tiniest “livestock.”