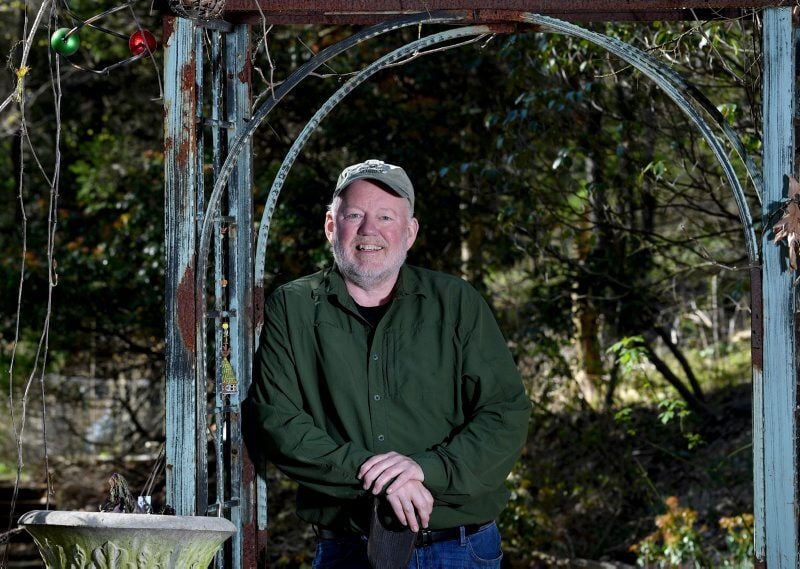 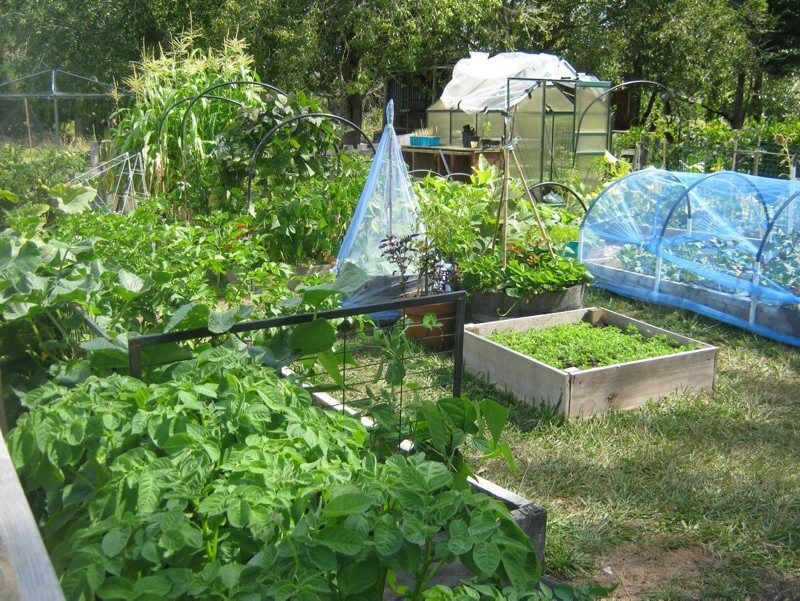 In this unfenced vegetable garden, note the floating row cover at far right protecting the plants in the bed beneath it. 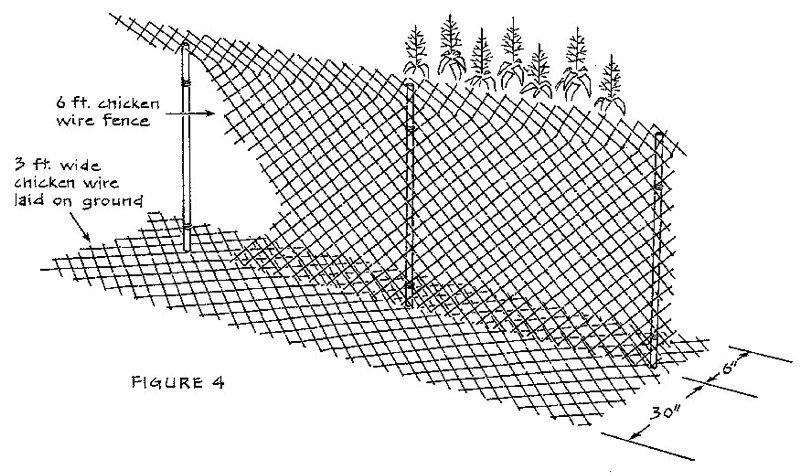 This fencing configuration confounds ground hogs and keeps them where they belong-outside the garden.

Do fearless fawns and their deer elders keep helping themselves to your vegetable garden and/or other desirable plantings? Have molesting moles, visiting voles, bad bunnies and, even worse, woodchucks, found their way to your valued vegetation? Then you’ve got plenty of company, including gardening guru Doug Oster.

Oster is the owner of a 4-acre property north of Pittsburgh who has experienced all of the above. But Oster is also a horticultural writer and Emmy-winning producer and host of “The Organic Gardener,” a weekly radio show on Pittsburgh’s newsradio station KDKA. He is a worthy opponent with a bag of tricks to thwart those formidable four-legged foes. During a recent webinar hosted by Butler County’s Penn State Extension, he shared strategies for outsmarting wildlife to protect plantings.

Oster, who focused mainly on troublesome deer, first outlined deer’s eating habits. He explained that following the rut (deer mating season), which occurs around mid-November in Pennsylvania, deer form into herds and follow an “alpha deer,” who shows them what to eat. In the absence of a leader to emulate, deer — especially young ones — embark upon a trial-and-error process of nibbling on almost anything herbaceous they encounter. Oster pointed out that discouraging deer would be simpler for gardeners if all deer eating patterns were consistent.

Based on experience with his own property, Oster noted that plants such as hostas, tulips, daylilies and arborvitae are among plants favored by deer palates. He offered some strategies for deterring deer damage to landscaping.

A physical barrier like a fence is the obvious choice to keep out intruding deer, he said. However, it needs to be both tall — ideally 7 feet high — and also sturdy. Using inexpensive material like bird netting might seem cost-effective, but heavier, post-mounted deer netting is the way to go, said Oster, noting that his deer fencing has lasted more than 20 years.

Another option is to protect individual plants by putting fencing material either over top of low plants, or constructing barriers around young trees using tomato stakes with fencing stapled to them. Solar-powered electric fencing can be a workable alternative on a sunny site; putting peanut butter on the electrified wire is necessary initially to lure deer to touch it and learn that doing so causes an uncomfortable shock.

Oster has also had success extending the apparent height of fencing by stringing 50-pound monofilament fishing line across the top of fence posts that are higher than the wire on them. He then suspends streamers made of synthetic baler twine or shiny craft-shop ribbon from the fishing line to create the illusion that the barrier portion of the fencing is taller than it is.

Recommendations To Keep Deer Out

Since you likely can’t fence your whole property, Oster recommended other deer-deterrent tactics that include using a motion-activated sprinkler in non-freezing weather; use of motion-activated lighting; and playing talk radio over an outdoor speaker system. Floating row covers are another workable choice for unfenced gardens.

Oster said that a low-tech method he has employed with success is dogs, noting that “Dogs don’t like deer and vice versa.”

Using repellents to discourage deer is another method to protect desired vegetation. Oster mentioned that there are numerous such products available at lawn and garden stores. He said his best success has come using Bobbex, a bad-smelling spray product that sticks well to plant surfaces and lasts through about three rain events before reapplication is necessary. Repellents also come in granular form, tea bag-like packets placed on the ground, as well as do-it-yourself mixtures of bad smelling or tasting ingredients like garlic, onion and hot pepper.

Planning plant location with four-legged pests in mind is another tactic that works. Oster suggests growing your favorite plants closer to the house, where deer might be less inclined to venture. Also, “Think about what grows where,” said Oster, keeping in mind which plantings deer do and don’t prefer. Mint, garlic, chives and lavender are all fragrant plants that deer tend to shun, which is one of the reasons Oster plants his beloved tulips in his vegetable garden. Flowers such as nasturtiums are deer discouragers, as are plants with thorns, along with fuzzy plants like lamb’s ear.

Oster went on to enumerate other ornamental flowers that deer dislike. Daffodils are chief among the flowering bulbs that don’t please deer palates. Oster’s favorite variety is the showy, late-blooming, long-blooming Sir Winston Churchill variety, with its double petals and gardenia-like fragrance. It’s a tough variety that stands up especially well to deer with its sturdy stems.

Other entries on Oster’s deer-resistant bulbs list include puschkinia, with its creamy white petals striped with blue, which he likes to pair with glory of the snow’s Violet Beauty variety. Both bloom in spring right after crocuses. Irises are also on this list, along with allium azureum, which resembles blooming chives. Deer dislike the odor of pretty fritillaria and also avoid snowdrops and grape hyacinth.

When it comes to perennials that discourage deer, Oster cites long-blooming corydilas lutea, sometimes likened to a yellow bleeding heart, which forms colonies by seeds, not runners. Deadheading single coneflowers’ first set of blooms, then watering and fertilizing, will assure not only deer avoidance, but will also provide plenty of seeds for birds and nectar for pollinators at the end of the season. Anise-scented agastache is another deer-resistant pollinator favorite, according to Oster.

Bleeding hearts, foxglove, heuchera, bee balm and hellebores are additional plants that deer don’t like. Oster pointed out that helleboris niger, commonly known as the Christmas rose, blooms in November, and like its spring-blooming cousin, the Lenten rose, provides year-round green foliage that deer won’t eat. Ornamental grasses are another anti-deer option gaining in popularity, he added.

Among the annuals that deer don’t prefer are salvia, snapdragons and dusty miller. Sunflowers are another good option, with Oster preferring the tithonia “torch” Mexican sunflower, which not only grows 6 to 8 feet tall, but is also a pollinator “magnet.”

Of course, deer are not the sole devourers of plantings. Oster encouraged gardeners to “try to live with moles,” which are insectivores that actually provide good soil aeration, eat grubs and create a little fertilizer.

What’s the Buzz? Bees Around The Home

More damaging are voles, vegetarians that can grow to have large colonies. For these pests, Oster recommends using “Mole Scram,” a garlic and castor oil-based product which is laid down in 1-foot strips, one strip at a time, gradually moving voles across the garden and off site.

The answer to “bad bunnies,” as well as chipmunks, is using organic hot pepper wax spray, which is objectionable to these animals, but does not affect humans. This makes it suitable to use on tomatoes.

Groundhogs pose the hardest gardening challenge according to Oster.

“You can’t have a garden and have a groundhog,” he said.

The Pennsylvania Game Commission recommends live-trapping groundhogs and then humanely killing them, rather than relocating them and risking the spread of rabies. Special L-shaped fencing with a horizontal extension at ground level is another option.

Oster said he’s often asked, “What should I grow.”

His wise answer is, “Just grow what you love and you’ll never be disappointed in the garden.”

Associate professor Dr. Cerruti Hooks explained that weeds are very competitive and very adaptable, meaning farmers can vary their routine to help avoid weeds becoming even more of a problem.