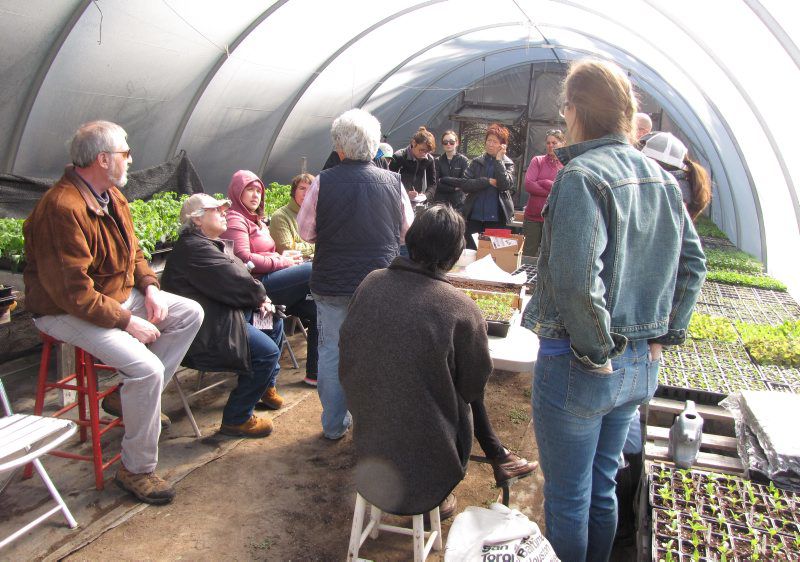 Farmers crowd inside the hoop house at Hattie's Garden, in Lewes, Delaware, to learn more about transplanting young seedlings. 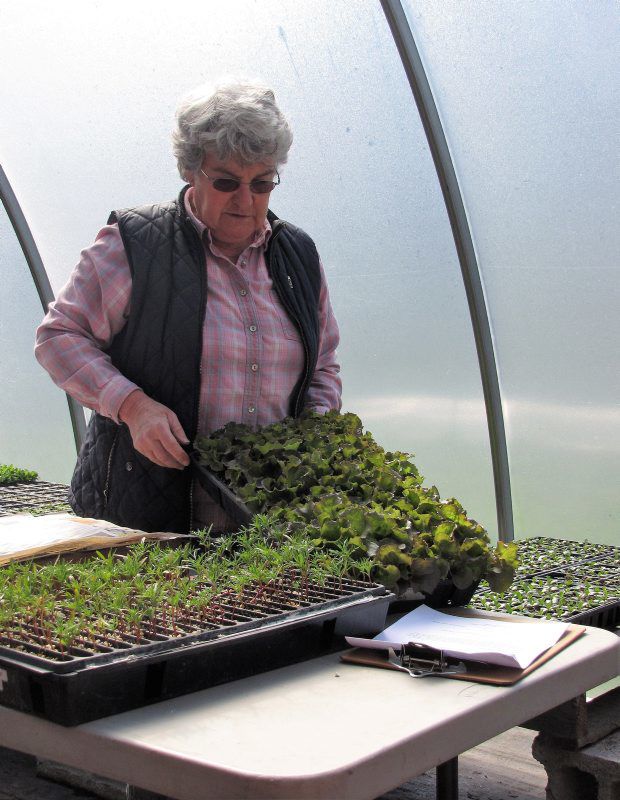 Hattie Allen demonstrates how to plant and begin new seedlings every spring. 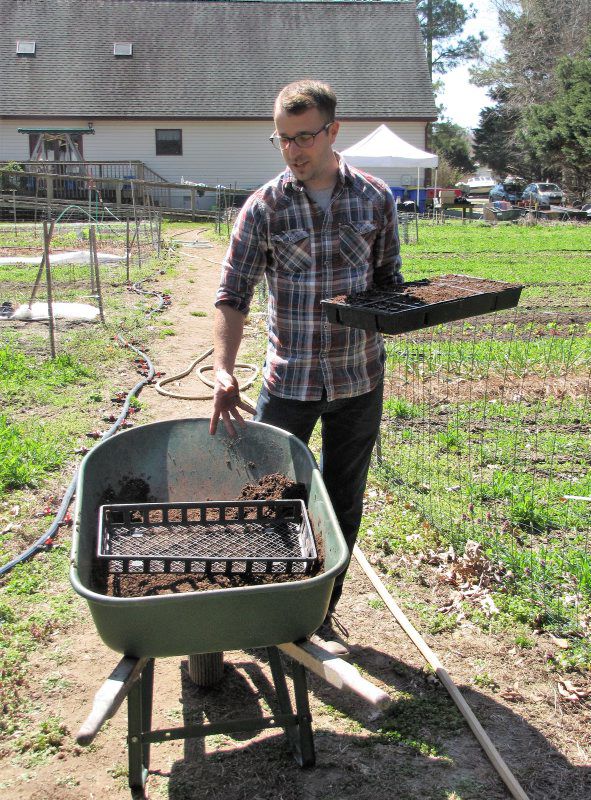 Taylor Heydt shows how to properly sift soil before preparing to plant. 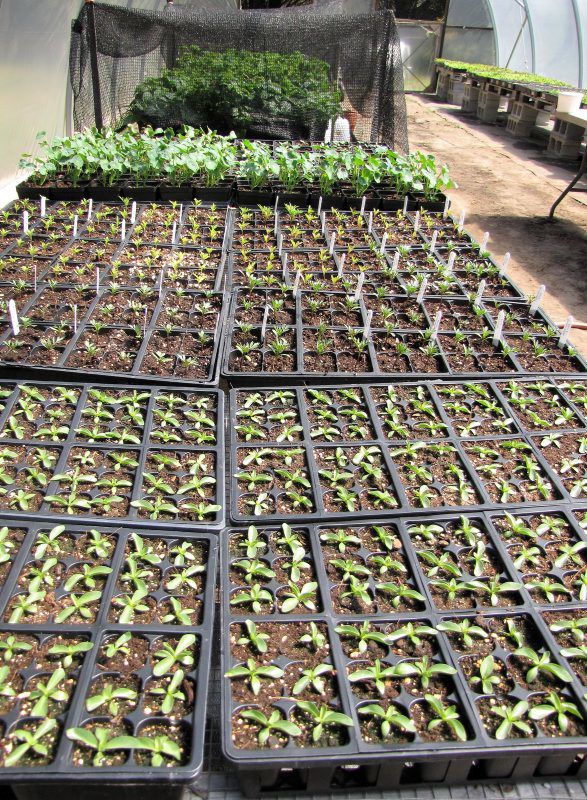 Thousands of flower, herb and vegetable seedlings already have been started at Hattie's Garden.

Farmers crowd inside the hoop house at Hattie's Garden, in Lewes, Delaware, to learn more about transplanting young seedlings.

Hattie Allen demonstrates how to plant and begin new seedlings every spring.

Taylor Heydt shows how to properly sift soil before preparing to plant.

Thousands of flower, herb and vegetable seedlings already have been started at Hattie's Garden.

LEWES, Del. — At the end of an exceptionally cold March, Austrian peas and other plants were braving the chill just outside the hoop house of Hattie Allen, a member of Future Harvest Chesapeake Alliance for Sustainable Agriculture. A small group of farmers had joined her for a hands-on workshop about growing their own transplants for small farms on Saturday, March 31.

Allen grows flowers, vegetables and herbs on a small parcel of land just outside Lewes. She intensively farms the land and at the time of the workshop already had thousands of seedling lettuce, spinach, squash, tomato, dill, cosmos flowers and other plants thriving in her hoop house.

Allen told the farmers that they can plant seeds almost anywhere inside their home to get them started before the weather warms.

“You have to decide what you’re going to give up,” she laughed.

She suggested planting the seeds, covering them lightly with perlite or vermiculite to keep them moist, watering them and then covering them with clear plastic wrap until they germinate. She advised making sure to mark the trays with the date, type and variety of seeds when they are planted. After they germinate, the plastic can be removed and farmers can begin watering them when necessary.

She said to be careful not to put the seedlings in direct sun while the plastic is still covering them, to avoid “frying” them.

She suggested using fresh seeds whenever possible. Seed saved from the previous season should be kept in an airtight and cool place. She often keeps her seeds in Mason jars in the freezer until she’s ready to plant in the spring.

“In any case, you want to grow plants from the best seed you can get, especially for larger plants where the quality of each plant is so important to your bottom line. Plant much more seed than you will need and use only the most vigorous and healthy seedlings. These will germinate first and grow more rapidly than their siblings,” she stated in her written handout.

Once the seeds have germinated, she said, farmers should start preparing them by hardening them off and getting them used to colder outside weather. The young plants are delicate, and farmers should be cautious about too much cold or too much sunlight. When they start taking the plants outside, she suggested doing so in the morning when the sun is less intense.

“Don’t take them out at noon,” she said.

Cold frames can also be helpful in chilly spring weather.

Allen suggested staggering plantings to avoid having all the crops come on at the same time.

“I don’t like putting all my apples in one basket,” she said.

Farmers need to be flexible about planting times because of the way the weather can vary, she said. Warm February temperatures this year tempted farmers to plant early, but a warm February was followed by a cold March and a succession of coastal storms. Light dustings of snow even continued into April.

Allen said farmers should take a good look at their property to help determine where there are sheltered areas, sunny spots, areas protected from the wind, etc.

That’s very important in meeting the needs of your plants, she said.

Farmers should learn what soil temperatures are needed to germinate various crops. For example, she said, it’s difficult to get spinach to germinate in summer, but pumpkins will germinate best in the summer when the soil is heated to about 86 degrees.

She cautioned farmers to keep seed beds clean and try to keep weeds under control.

“Do not let weeds go to seed,” she said.

It’s also important for farmers to know the nutrient levels of their soil, she said. Most Delmarva soils in her area are “old glacier” soils which have been extensively farmed for many decades or longer, she said. Adding micronutrients may make a big difference in production.

“It’s easy to re-mineralize the soil,” she said.

She specifically said sulfur and boron should be added to most local soils in her area.

Future Harvest CASA states that its mission is to provide education, networking, and advocacy to help build a sustainable Chesapeake foodshed, where food flows from farm and fishery to table in ways that strengthen farming and the regional food economy; protect the land, water and air; and provide healthy, nutritious food that sustains the region’s communities and cities.

For more information about Hattie’s Garden, contact Allen at 302-945-0350 or at hattiesgarden.com. Allen can also be found at the Historic Lewes Farmers Market on Saturdays when the market is open.

Michael Short is a freelance writer in Delaware. He can be reached at michaelshort1@verizon.net or 302-382-3547.