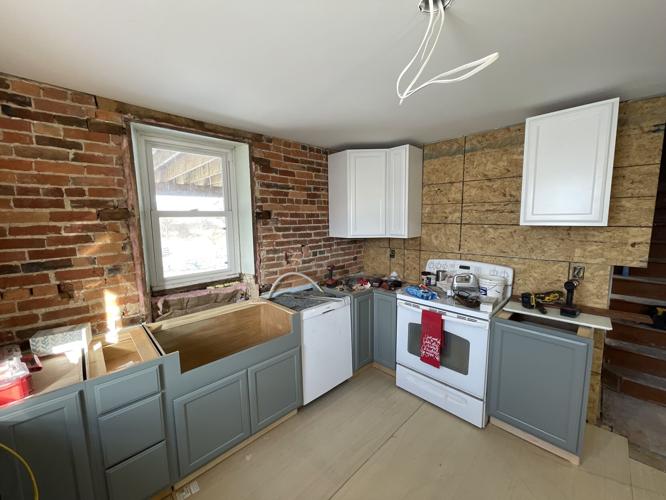 An inside look at the remodeling process of Lehmans’ kitchen. 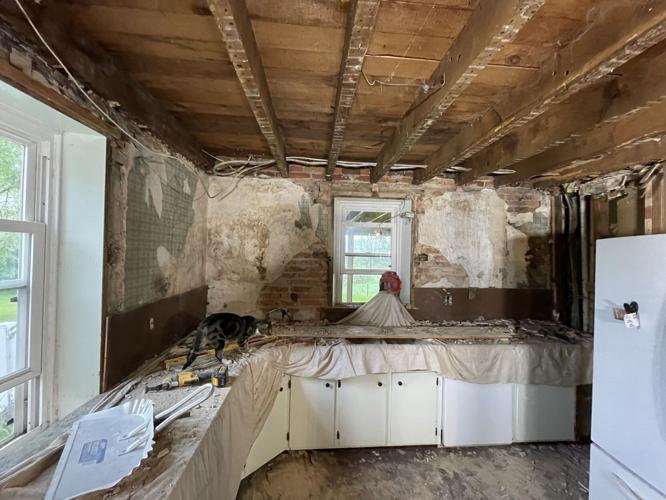 A before photo of the kitchen. Stephanie and Cyrus Lehman removed coats of wallpaper and plaster that covered the walls. 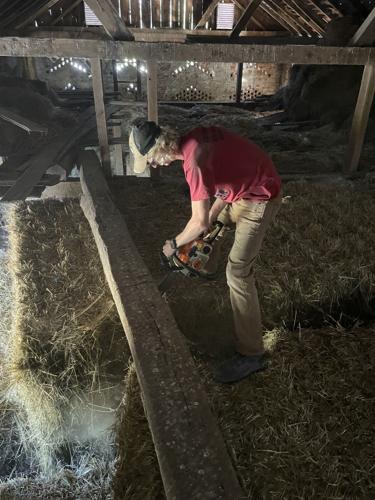 Cyrus Lehman getting the barn hayloft beams ready to be posted inside of the house. 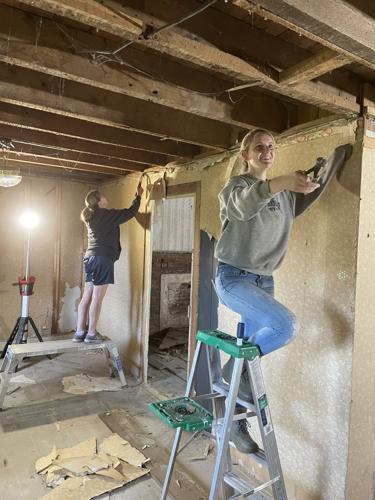 Stephanie Lehman works on the walls and ceilings of the farmhouse.

When Stephanie and Cyrus Lehman of Long Lane Livestock in Chambersburg, Pennsylvania, began modernizing their 150-year-old brick farmhouse, they knew they wanted to keep its charm.

“We wanted to keep parts of the house that would speak to its character,” Stephanie said.

Since 2020, the farming couple has been working room by room, slowly adding modern concepts while preserving elements they find attractive, such as the rustic, red brick backsplash in the kitchen.

The original layout had multiple divided rooms on the second floor, where the kitchen and living areas are. The couple preferred an open floor concept, so they knocked down the walls and replaced the home’s main support beam. That original beam had been in place since 1860 and was showing its age. Part of it was rotted and bowing, which had a negative ripple effect on work done by previous contractors, said Cyrus, who happens to be a general contractor.

“It wasn’t very supportive for the one end of the house,” he said. “We just had to cut that out.”

Cyrus poured a footer to replace the original beam with laminated veneer lumber.

“There’s enough support to hold the weight from the roof down and the weight of the upstairs,” he said.

Additional support included posts from the original barn’s hayloft. Cyrus cut and parceled the posts and took them to a lumber mill where they were sawed to fit the dimensions of the second floor. The Lehmans wanted to preserve unique 19th century structural techniques, like mortise and tenon joints, but most had to be re-done.

“It’s smart for back then with what they had to do, but it doesn’t last very long,” Cyrus said.

The Lehmans spent days remodeling all the walls of their farmhouse. They peeled off wallpaper, scraped off layers of paint, chiseled away the horsehair plaster down to the bare frames, and replaced those layers with drywall.

“I wanted the walls to be nice and smooth,” Stephanie said.

Drywall also improved the home’s insulation efficiency, which can mean significant savings in an old farmhouse. The kitchen was the focal point of their remodeling plans. It was also the part that took the most time because the room needed electric and plumbing work. Stephanie said they expected to redo the kitchen walls with drywall, but those plans changed when she found rustic red bricks behind years of cover-up.

To embellish the color of the bricks, the Lehmans added custom steel gray cabinets at the floor level and white cabinets against the brick backsplash. Stephanie also found a 10-inch-deep white fire clay farmhouse sink to pull it all together. The Lehmans are happy with the improvements, but they know a centuries-old farmhouse is a lifetime project.

Stephanie said she is anxiously waiting for the day when the bulk of the remodeling is completed so she and Cyrus can enjoy the fruits of their labor before making more adjustments for children.

But enough has been accomplished for the Lehmans to host Easter this year.

“At the end of the day, through this whole process, we have been extremely blessed with very little hiccups,” Cyrus said.

“I feel we are finally getting to the Instagram reel portion of this process,” Stephanie added.

A look inside a Pequea Township one-room schoolhouse, now home to a former student [photos, video]

Is the open floor plan on its last legs? Not in Lancaster County

It’s a question that’s been posed every so often for years.

A set of three 18th century wooden angels once graced St. Luke Evangelical Lutheran Church. In the intervening 255 years, the angels have taken an intriguing flight through time.

How does a family of city dwellers transition to living on a historic farm deep in Lancaster County’s Amish country?