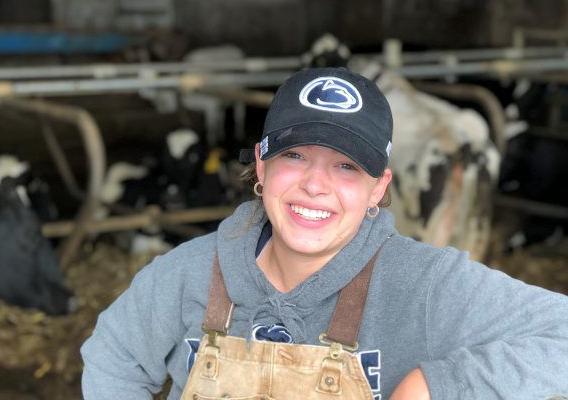 Besides promoting dairy, Denae Hershberger feeds the calves twice a day at her family farm in Martinsburg, Pennsylvania. 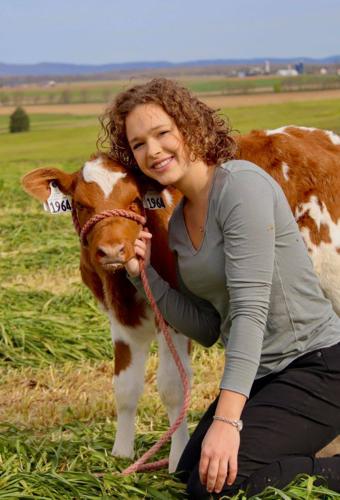 Besides promoting dairy, Denae Hershberger feeds the calves twice a day at her family farm in Martinsburg, Pennsylvania.

Denae Hershberger, alternate Pennsylvania dairy princess and Bedford County dairy princess, has had a challenging job with the advent of the coronavirus pandemic this spring.

Typically, the duties that come with the dairy princess title would have her talking with schoolchildren and mingling at community functions as she spreads the word about the value of dairy products. This year called for some innovative alternative ways to get the job done and Hershberger did just that.

Milking 230 head of Holstein and farming 1,000 acres keeps the entire family busy, including Denae Hershberger’s siblings — Ross, Leah, Ridge and Savannah. Denae said it is her job to feed the calves, a duty she performs twice each day. Three seasons of the year, she also helps with field work.

A senior at Northern Bedford High School, she, like other seniors, was disappointed with the interruption of her last days of high school. In addition to her dairy princess duties, she ran track and field, and was active in FFA. She is also a member of the Southern Cove 4-H Club. Hershberger is looking forward to the school’s senior prom, which is planned for July at the Altoona Grand Hotel. By fall, she will be enrolled in the Mount Aloysius College nursing program.

In her county-level dairy promotion role, Hershberger participated in the farm market, downtown Bedford events at Christmas, and Downtown on the Farm. Prior to schools shutting down in March for COVID-19, she had visited all of the county schools to tell students about the value of dairy in the diet. She relinquished the county title at the end of May.

Hershberger’s state duties were primarily to spread the word on dairy products. So, instead of visiting groups in person — due to the state’s social distancing and stay-at-home requirements to help stop the spread of COVID-19 — Hershberger has made videos, written articles for newspapers, and posted on social media.

Her favorite part of the state title was fulfilled prior to the virus at the Pennsylvania Farm Show in January.

“We had cows that gave birth for the people to watch and it was absolutely fascinating to them,” she said.

For Hershberger, the week at the Farm Show in Harrisburg was busy, but a lot of fun, including intermingling with other dairy princesses from around the state.

In January, Hershberger was also introduced to the 412 Food Rescue program, based in Pittsburgh. The aim of the organization is to keep good food from going to waste when many people still go hungry. The program uses an app to connect places that have food to donate with people who can pick up and drop off the food to locations that need it.

Today, living on a dairy farm and observing how the pandemic has affected labor at food processors, Hershberger recognizes that there may be food being wasted due to processing bottlenecks. So, she has asked for volunteers to consider assisting the impactful worldwide initiative. For her birthday, Hershberger plans to ask for donations to the 412 Food Rescue program.

Coming from a family of musically talented people, Hershberger shares her talents with the members of the Martinsburg Grace Brethren Church by singing in the choir and playing the piano.

Farming will always be a part of her life, she said.