An avid fisherman in Lancaster County, Pennsylvania’s ponds, streams, rivers and creeks, Ben Beattie knows about fish bait. And he thought he had a better idea of what kind of bait local fishermen were looking for than the cookie-cutter soft lures they were buying commercially. Like all of us at one time or another, Beattie thought he could “build a better mousetrap,” as the saying goes. And, in this case, he did.

Beattie is a senior at Lampeter-Strasburg High School. When he was a sophomore, Beattie asked his high school ag teachers, Janae McMichael and Holly Oberholtzer, if he could turn his experience in freshwater fishing and interest in fishing lures into a Supervised Agricultural Experience, or SAE, program. He wanted to create a hobby business making lures for small, pan-sized fish. They said yes to the SAE, and the rest is history.

Beattie is just months away from starting his studies in fisheries biology at Mansfield University of Pennsylvania and a career in the conservation field. The Bait Bungalow — his growing hobby business — is in its third year of operation. He does all aspects of the business, including design, manufacturing, marketing (through social media platforms and his website), sales and fulfillment of thousands of soft, rubber-like lures to folks across the country who take fishing seriously.

On a recent, cold, mid-February day, Beattie was at The Bait Bungalow to talk about his business in the corner of his cold garage. On this day, the garage was just a few degrees above freezing with a construction-site heater for warmth.

Beattie remembers his dad taking him fishing when he was 6, but explains that he really didn’t get excited about it until his early teens. Now, he regularly fishes local creeks like the Big and Little Beaver, in western Lancaster County, and Muddy Run Park in Holtwood, as well as the Susquehanna River. 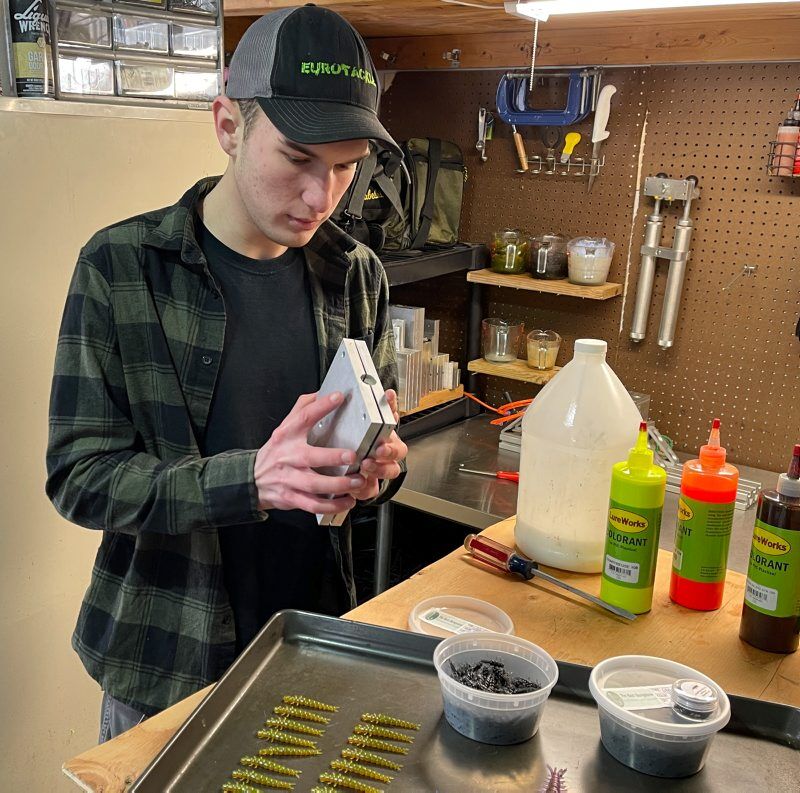 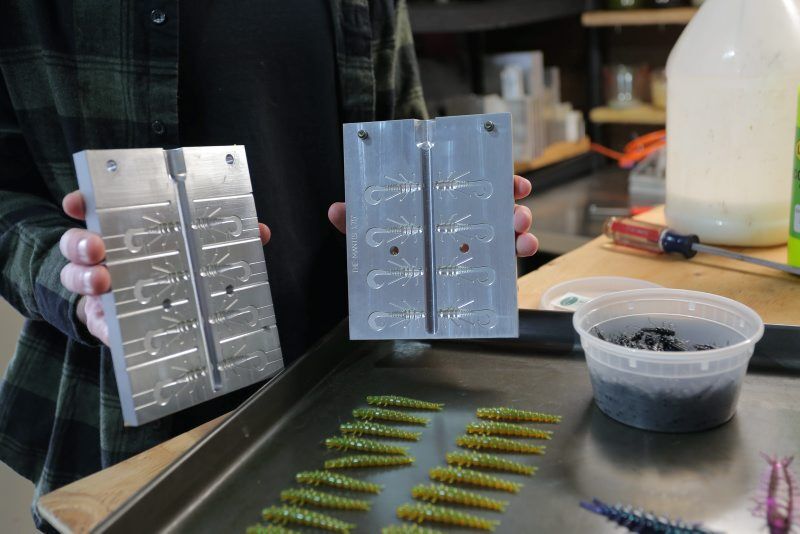 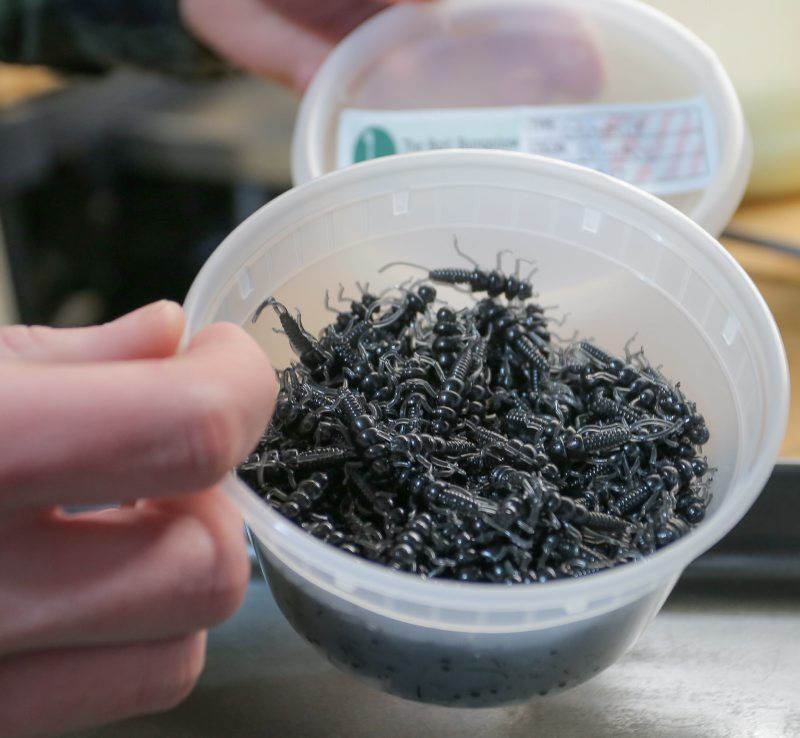 Beattie holds a container of the black stonefly lures that he created and sells. 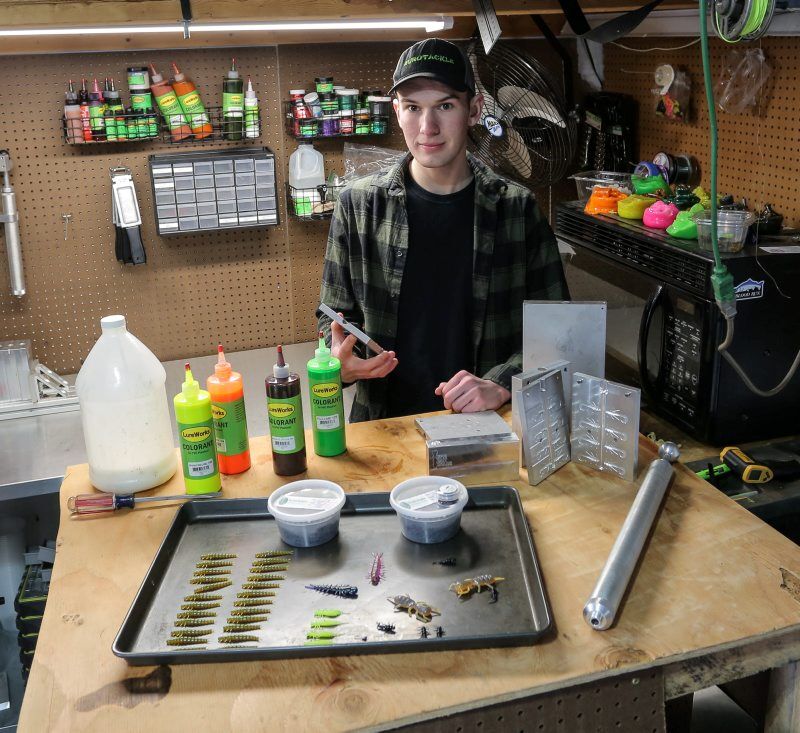 Ben Beattie works at his bait business, The Bait Bungalow, in the family garage in Lancaster County, Pa.

Beattie holds a container of the black stonefly lures that he created and sells.

Ben Beattie works at his bait business, The Bait Bungalow, in the family garage in Lancaster County, Pa.

“I am mostly a catch-and-release fisherman with small, what we call “pan fish,” including bluegill, yellow perch and green sunfish,” he said. “I also fish for trout that the Pennsylvania Fish and Boat Commission stock in local streams in the spring, as the trout don’t survive in the warm, shallow water during the summer.”

“Local trout streams are basically labeled ‘put and take’ as the fish are put into the streams and the anglers take them out,” he added.

Until he was 7, Ben was the only child in the Beattie household, but was joined by three sisters (triplets) in 2010. He echoes his parents, Keith and Lori, with the sentiment that “Life since has not been dull.” Beattie has introduced his sisters to fishing, but although they caught pan fish on their first outing, he isn’t too optimistic they are going to tag along for a second trip.

Turning a Hobby Into a Business

When Beattie started fishing for bass, he became aware of how important the right lure was to attract fish, especially the more active bass.

“I really wasn’t happy with how the rubber-like lures available in sporting goods stores or online were working,” Beattie said. “Much of it was imported from China and the quality was poor.”

Beattie thought he could make better lures and felt he could sell them to support his fishing passion.

Beattie knew that the size of the lure equated to the size of the fish it attracted. There already was a lot of competition in the market for lures to attract sport fish like bass. So he decided to concentrate on making smaller lures, resembling insects, for small fish. He purchased his first molds in 2018 and taught himself the production process by watching YouTube videos.

“This really isn’t rocket science,” Beattie said. “I thought I knew what might attract the fish. ... (I) focused on doing them in a variety of colors, and glammed them up with glitter.”

Like any business, there were start-up costs for Beattie in equipment and supplies. The molds used to shape the lures have cost almost $200 each. To date, Beattie has invested some $2,500 into the business — buying molds, a pneumatic press and Plastisol, as well as production and packaging supplies — from the money he has earned working as a line cook for a local restaurant. He has reinvested his profits from lure sales back into the business.

Beattie enjoys both fly fishing and casting with a spinning reel, but uses the spinning reel most of the time. He says he tests his insect lures with casting and fly fishing, and they attract fish to the hook either way.

Even though he says making lures isn’t rocket science, Beattie explains all the steps that must be followed to maintain the quality of the finished product. He mastered the process by learning from his mistakes.

“The raw material is Plastisol, that when it sets, feels like soft rubber,” he said. “And, it also has several other uses, including the raised artistic designs on many T-shirts.”

Beattie purchases Plastisol in 5-gallon buckets, but uses it in very small batches because, he said, “The small lures use only ounces of the liquid in each production mold.”

The manufacturing process literally takes minutes as Beattie warms up the Plastisol in a measuring cup in a microwave on high for two to three minutes. He then adds a tint from colored dyes and mixes in glitter to help the lure sparkle in the water at the end of the fishing line.

“There is no one formula for what looks good and what will work,” he said. “It’s all trial and error, and I pick colors that I think will catch a fish’s attention.”

Beattie said the molds come in a variety of sizes and are able to hold from just a few lure shapes to many multiples. Most of his molds make about six lures at a time.

After the Plastisol is heated, tinted and glitter added, it is pumped into the molds with an injection tube and allowed to set, which happens in just a few minutes. The lures are removed from the mold and inspected for quality, then packaged.

“Most of my insect lures have lots of small appendages and they have to be intact or I discard the lure and recycle it in my next production run,” Beattie said.

Beattie packages small orders of 10 lures in labeled, plastic bags with a fish oil lubricant and packages larger orders in plastic food containers. He uses the postal service for delivery.

“The lures not only attract fish in the stream, but the color and glitter also catch the eye of the fisher(s) who always are looking for something new,” he said.