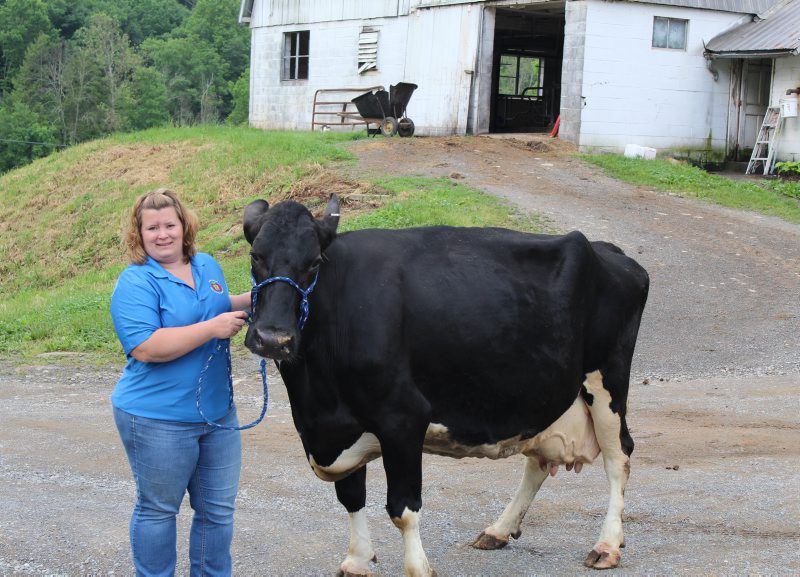 Krista Pontius stands on the farm property she shares with her husband Jake. Plum is one of oldest cows on their farm. 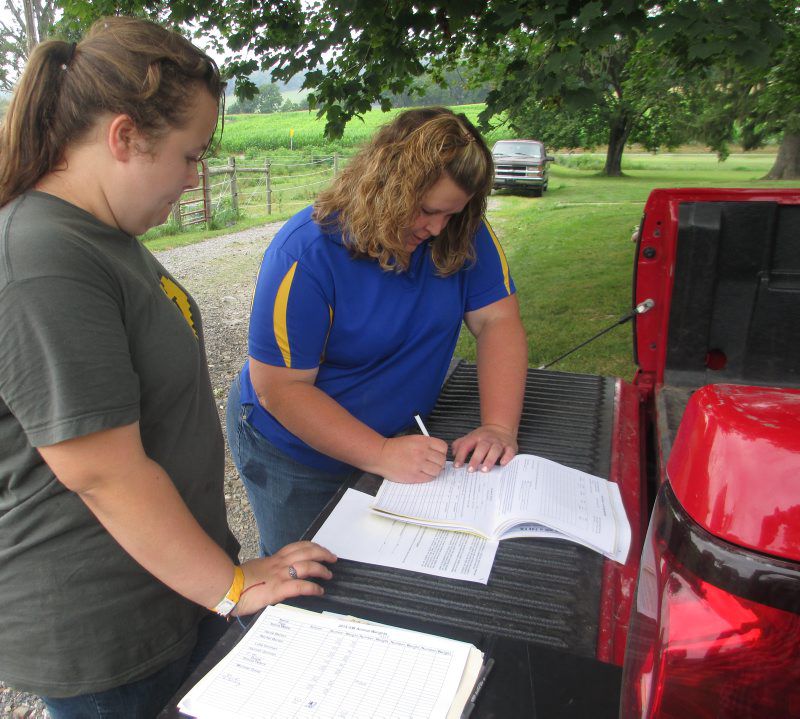 Krista Pontius stands on the farm property she shares with her husband Jake. Plum is one of oldest cows on their farm.

Pontius also is a Region VI vice president for the National Associaton of Agricultural Educators. She will run for president-elect of the region in December. Until then, she is busy visiting other mid-Atlantic and New England states in her region to learn more about how ag education is developing and growing in other areas.

“It has been very fulfilling to serve in this role,” Pontius said. By the end of summer she will have been in eight states. Her first visit is to Vermont. Pontius had visited Connecticut a few years ago and said they had a lot of aquaculture.

“Fish is their big picture,” she said.

While Pontius is enthusiastic about her role as the liaison between the national and regional offices, she is most committed to Pennsylvania agriculture.

“Advocacy is the most important thing,” she said, “We need to learn to tell our story better. As farmers, we bust our butts all the time, and we are constantly getting hammered.”

Pontius referred to regulations imposed by the government and various organizations.

“We don’t get to tell the good things we do. At night when we’re checking on a cow, I wish those people could see what it takes to put milk on the table. It really gets tiring for farmers to be constantly battling (with regulations, etc.).”

Besides teaching ag classes, Pontius works as Greenwood High School’s FFA advisor and serves as the barn superintendent for the Juniata County Fair.

She and her husband, Jake, operate a dairy farm in Millerstown on 111 acres with 45 cows plus heifers. They grow corn, beans, wheat and hay. Jake is the seventh generation farming the property.

“Someone’s been milking on this farm for over 100 years,” she said.

Pontius grew up on the Byers farm about 7 miles from her current home. Her parents raised beef and hogs.

Her life has been influenced by farming from the beginning. Both sets of her grandparents farmed for a living. She rode horses regularly at her paternal grandparents’ farm.

Pontius had a steer for her first 4-H project.

“I had steers, beef and sheep over the years,” she said of her projects.

When she started dating Jake, Pontius turned her interest to dairy projects.

“Ever since the ninth grade, I knew I wanted to be an ag teacher,” she said. Pontius made up her mind at a very young age that she wanted to be a teacher in some way. The fact that she had a female ag teacher, MeeCee Baker, inspired her even more.

“Since that first day in ag class, I had it figured out, Pontius said.

Pontius stayed true to that desire as she worked hard in FFA through high school.

“Being a part of FFA, I wanted to give back. I know everyone says that, but when you work with FFA, you really do.”

Pontius became a member of collegiate FFA at Penn State, from which she graduated in 1997. She began her career as a substitute teacher at Greenwood High School as well as neighboring West Perry School District. She took a job at the Cumberland-Perry Area Vo-Tech School teaching horticulture, and later accepted a position in the Big Spring School District as an ag teacher.

Pontius was first hired at Greenwood as a part-time business teacher and part-time ag teacher. Eventually, she was able to teach strictly agriculture full time.

One of her students at Greenwood turns out to be the daughter of her former teacher, Baker.

Baker had gone on to be president-elect of the Region VI National Association of Agricultural Educators and later, its vice president.

That role took place during Pontius’ senior year at Penn State. She and some classmates filled a car and travelled to Cincinnati to see Baker become the first female president-elect.

Pontius is passionate about ag education because she fears that if schools cut their ag programs, fewer students will have opportunities to continue on in the field.

“Nationwide there is a serious shortage of ag teachers,” she said, adding that if programs fall apart, there will be less educators.

Pontius, who also has a master’s degree in agricultural education, and her co-teacher logged 122 extra hours last year to meet the needs of their school’s ag program.

“People think it is about the money. It’s not. It’s about the opportunity for our students. The classroom is why we are here. We have FFA projects to supervise. We have to monitor individual projects, too,” she said, besides teaching and preparing lessons.

Ag education goes a step beyond the average classroom, she said.

“A science teacher can teach about slope, but I can take the kids out into the field and calculate it. We get to take cool stuff like that and apply it. The light bulbs go on and they get it.”