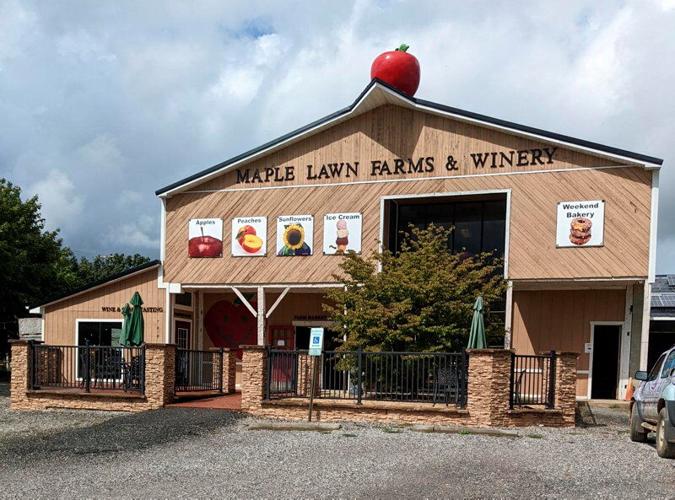 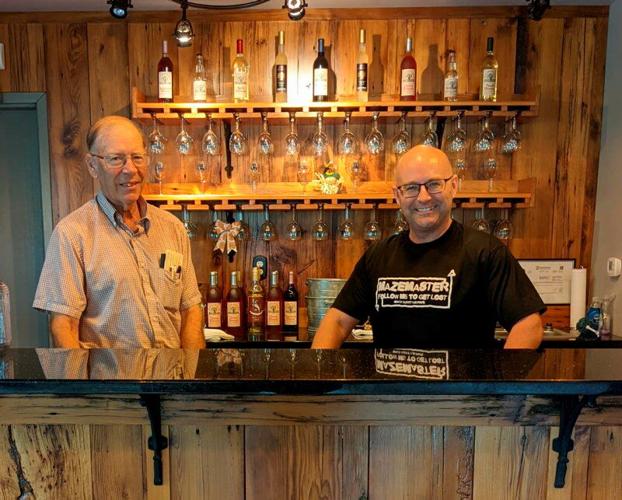 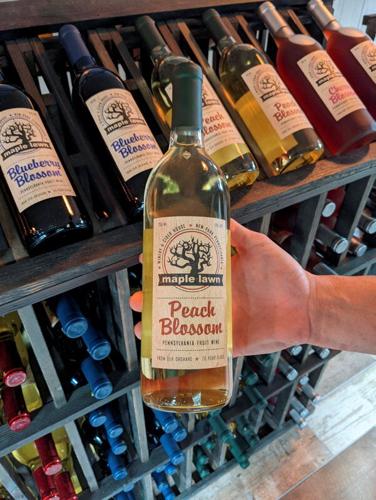 A bottle of Peach Blossom, the first wine made at Maple Lawn Winery and Cider House. Photo taken Sept. 12, 2022 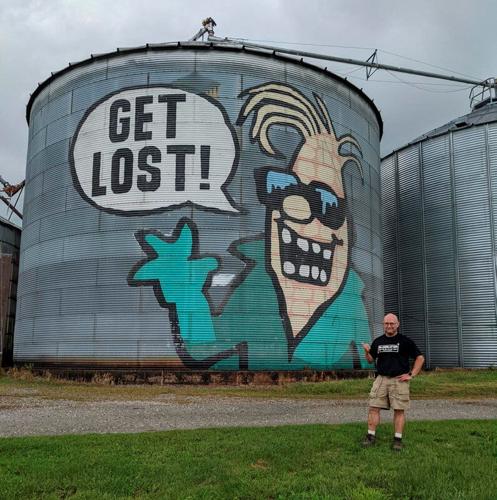 Maple Lawn Farms is a field of dreams for the McPherson family, whose priority is bringing people to the farm. Innovation, marketing, networking and expansion have created a business model that is equal parts tourist attraction and working farm.

“Everything we do has to have that kind of public face,” said Hugh McPherson, a fifth generation farmer who runs the farm’s Maize Quest Fun Park and other tourist features.

The McPhersons married into Maple Lawn in 1883. Hugh’s father, Paul McPherson, who runs the farm operations today, believes the property was a general farm with a little bit of everything in the 19th century, but he hasn’t been able to track records that pre-date his family’s involvement.

Maple Lawn was a commercial fruit and vegetable farm with a sizable poultry operation for many years, but when local canning companies started going out of business in the 1960s, many southern York County farmers transitioned from the region’s dominant crops, potatoes and tomatoes, according to Paul.

Around this time, the McPhersons added grains to their acreage, and a short time later, they opened the farm to the public, starting with a small produce store and then pick-your-own produce.

Paul said the idea for pick-your-own came from Michigan. He had heard about a farm trying it there, and since no farms in this area were doing it, the family wanted to give it a shot.

Today, pick-your-own produce is the driving force at Maple Lawn. Hugh estimates as many as 38,000 people visit the farm each year to pick produce.

Unlike smaller pick-your-own farms, Maple Lawn is a commercial-sized operation, providing consumers with an array of choices and, according to Hugh, a better experience than a farm with only a small field dedicated to pick-your-own.

“We plant 10 acres of pumpkins, and we have 10 acres to plant pumpkins on, which is really just excessive for a pick-your-own pumpkin patch, but you can’t find it anywhere else,” he said.

Hugh proposed adding a corn maze to get more people to the farm for produce picking. He said he got the idea from a Lancaster Farming article about Saunders Farm’s mazes.

The Penn State grad with an ag business management degree shared the idea with his father, and Paul suggested he write a business plan and get a loan to start Maize Quest Fun Park.

“We weren’t the first corn maze, but we might have been the third or something,” Hugh said.

While the corn maze occupies most of the family’s time during the fall, the McPhersons have added other festivities to bring people to the farm throughout the year. They hosted their sixth annual sunflower fest this year, and their first lavender festival was a fragrant attraction.

The constant stream of visitors means crop damage is a concern, but Hugh said he has learned, specifically with the corn maze, to keep people mentally engaged, challenging them but not so much that they decide to “cheat” and go through the corn or “make their own fun.”

“So we make sure that in the design process, we’re creating something that is interesting but keeps you moving,” he said.

After maze season, the corn is harvested, yielding about 100 to 120 bushels per acre.

The McPhersons also host “Wine Your Way Out,” a smaller version of the corn maze that highlights the farm’s wine along with vintages from other local vineyards.

The McPhersons added a winery to the farm in 2015. They had been growing for other wineries and decided to take a stab at making their own. The benefit was two-fold: it created a use for produce not picked during the pick-your-own season, and it enhanced other agritourism features.

He doesn’t plan to expand the wine operation. Instead, he said, the winery simply brings more people to the farm.

“So, we can do these kind of unique events that appeal to a different market,” he said, “but we didn’t start with zero market. We started with tens of thousands of people, who come to Maple Lawn Farms and Maize Quest, to launch our winery. Going from zero to winery is much harder.”

Market in mind, the McPhersons were able to get financial help from USDA’s value added grant program. Paul said the grant made looking into starting a winery worthwhile.

Hugh learned how to make wine by watching online videos and getting help from Carl Helrich, owner of Allegro Winery in Stewartstown.

The McPhersons are always looking for ways to improve the annual events. A suggestion from fellow farmers led them to include fresh squeezed lemonade at the lavender festival. Because of that success — selling around 700 lemonades in a weekend — they are bringing lemonade to Maize Quest Fun Park. The McPhersons are also renovating a gift shop into a coffee house.

“You try a lot of things, and if you’re lucky, some of them are successful,” Paul said.

Keeping the public informed is another priority.

Hugh has has hired firms to help with social media and marketing, and his biggest takeaway is the value of email addresses.

“On any of those (social media) sites, you don’t own those people; those are not your customers. In email, they are,” he said. “That is somebody who has signed up to be on your list. So, we are huge believers of taking people off of social media with almost whatever offer it takes to get them onto our own list because I can email them for essentially free.”

Offers include chances to win tickets, coupons and special deals. With his list of emails, Hugh focuses on narrowcasting, meaning he has different email groups sorted by interest.

“We’re trying to keep the messages particular to what you’re actually interested in so that you’ll keep getting them,” he said.

He also focuses on general content, hiring an employee who works two days a week to get posts on social media with the idea that if you stop posting then you stop showing on people’s feeds.

He also writes blog-like emails, something his mother, Gail, started before her death in 2005. Before Facebook was popular, Gail would mail newsletters to a list of around 10,000 readers.

“When the postal department was rearranging post offices, our post office made a special exception — back our road to a dead end and turn around and come back — because they did not want to lose that mailing,” Paul said.

Whoa Nellie Dairy in Acme, PA, has made a lot of changes since Ben Brown took over six years ago.

Tourists can visit the Gettysburg, Pennsylvania battlefield on horseback with the assistance of a licensed guide.

Camping could soon get a boost as a revenue stream for Maryland farmers.

Central Park's carriage rides remain popular despite protests by activists and efforts to regulate the industry.

Barron Shaw, owner of Shaw Orchards, spent a morning showing the Young Growers Alliance around his farm and giving advice on techniques and strategies that he has found successful.

Rebecca Schweitzer is the markets editor at Lancaster Farming. She can be reached at rschweitzer@lancasterfarming.com