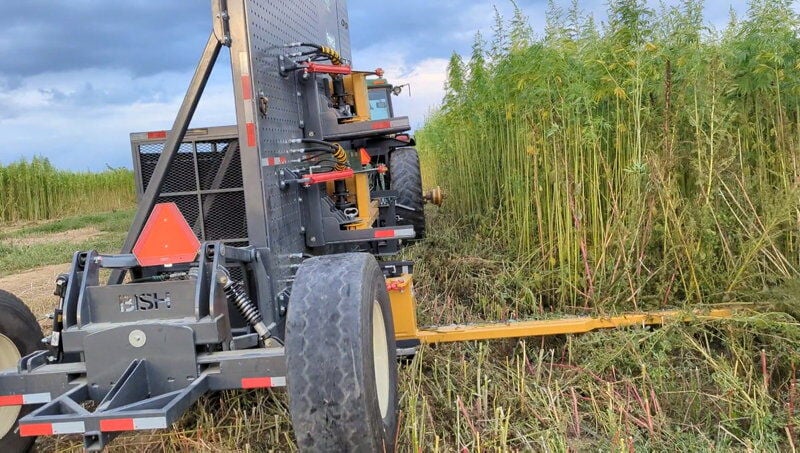 The new FiberCut harvesting machine comes with four independent sickle mower arms that can be used in tandem in separately. The use of sickle arms prevents hemp stalks from wrapping and allows the cut crop to be raked and baled more efficiently. 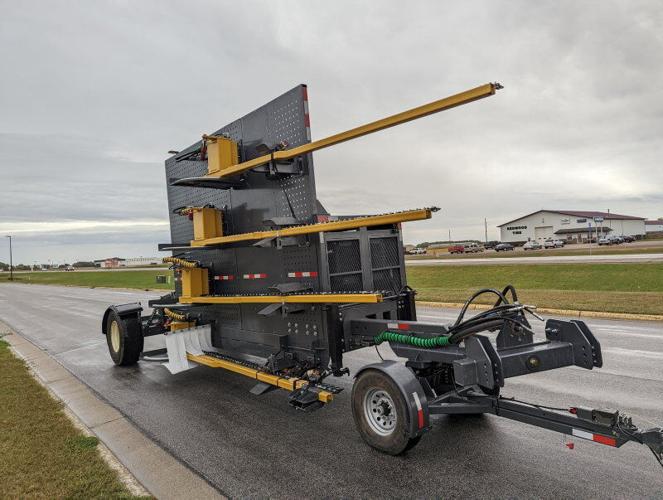 Equipped with four sickle mower arms, the FiberCut machine can harvest hemp at varying cutting heights and cut the crop into 20 to 30-inch sections, allowing for easier processing.

wo years ago, Andrew Bish noticed a challenge within the hemp industry, and he designed a solution.

Bish, who is the founder of Nebraska-based Hemp Harvest Works, believes variety is abundant within hemp crops. Different plant varieties reach different lengths and diameters, and growers have a multitude of objectives for the harvested crop. Some need the harvested hemp to be in 24-inch sections, others prefer 30-inch, and there are those who want just to the top of the stalk removed.

To address all of the needs and conditions, Bish designed FiberCut, an hydraulically driven machine equipped with multiple sickle mower arms that allow hemp stalks to be cut at varying heights and lengths.

“With all of these differences that we see in hemp crops, we wanted to build something that helps people get to where they need to be,” he said. “This is a machine that the customer can reconfigure to meet their needs.”

Traditional methods of harvesting hemp fiber come with disadvantages, Bish said. Ordinary round balers aren’t designed to handle hemp stalks that can reach 15 feet in length, and the material often binds up inside. Plus, unwinding a hemp round bale can be challenging when the stalks are so long.

And when it comes to cutting, disc mowers just aren’t designed to properly handle the large amount of biomass that comprises a hemp windrow. The enormous windrows don’t allow for proper retting, Bish said, because the outside is exposed to the air but this center isn’t, which allows for uneven curing. The spinning action of a disc mower can also cause the hemp stalks to wrap. Something that Bish said doesn’t happen with a sickle mower.

The sickle mower arms of the FiberCut lay the cut material out flat onto the stubble, allowing the retting process to occur before raking and baling.

And because the sickle arms on the machine function independently, growers can cut the crop at whatever length suits their needs. They can also do it quickly, as the machine is capable of operating at speeds up to 12 miles per hour, depending on field conditions.

“We’ve had people with a really high crop use just the lower and upper arms to cut the stalks in half, or use the bottom two arms if the crop is short,” Bish said.

The FiberCut is equipped with four sickle mower arms with 10- and 12-foot length options, and is attached to the tractor by a two-point hitch. It weighs 11,150 pounds and requires a tractor with 50 to 60 horsepower. Bish recommended a larger tractor, however, to handle the weight of the machine.

An onboard hydraulic pump and motor power the sickle arms, and there is an option to attach a binder to the machine.

“This is the first year of availability, and we’ve seen a pretty good reception,” Bish said. “Industrial fiber people have been attracted to this.”

The machine can also be used to cut other crops, such as tall grasses for biofuel. Most of the sales, according to Bish, have been in the East Coast, and the four-arm version has a price tag in the upper $80,000 range, while the two-arm model costs approximately $60,000.

As far as demand, Bish said it’s been steady but could be better. There aren’t a lot of outlets right now, he said, but he expects it to increase as more hemp acres are planted across the country.

Another challenge during the first year of production has been obtaining components for the machine. Bish said sourcing components has proved more difficult than the design process, particularly when it comes to hydraulic parts and cast aluminum items.

“Most of the foundries for cast aluminum in the U.S. have been closed, and hydraulic suppliers originally gave us a 30-day timeline for components, then it went to 90 and now it’s 270 days,” he said.

Still, Hemp Harvest Works has continued to produce FiberCut machines but Bish said preorders are necessary due to the lengthy wait to obtain certain components.

“The FiberCut is unique because it allows the customer to reconfigure the machine to meet their needs,” he said. “You control the height of the cut and the length of the sections, which makes this extremely versatile.”