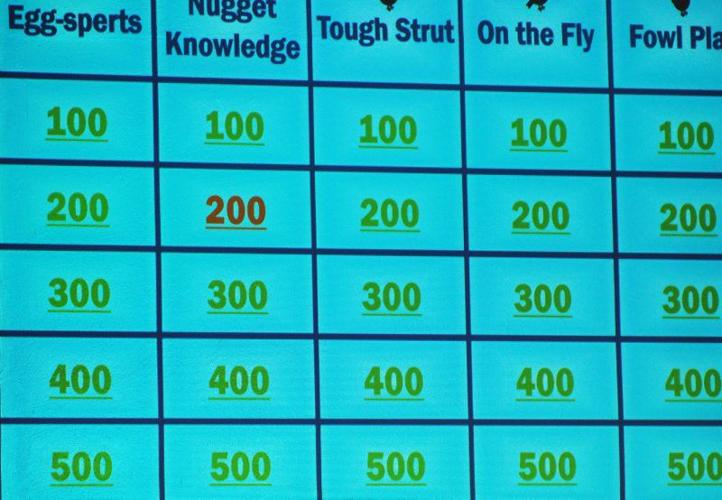 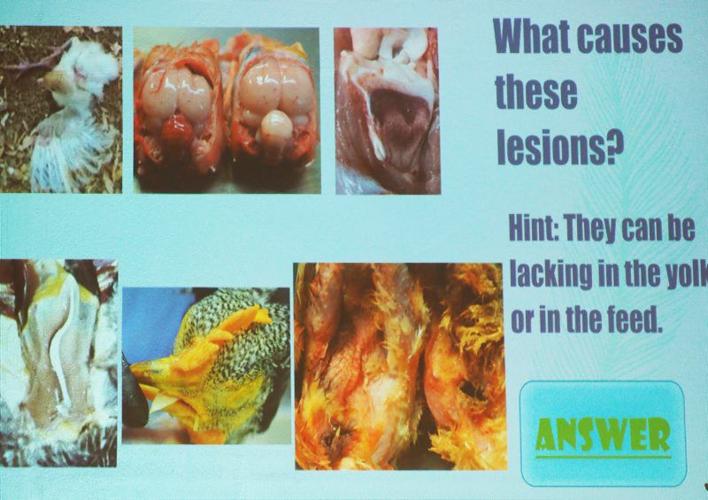 Martin introduced the Gettysburg native to a May 8 poultry management and health seminar at the Lancaster Farm and Home Center. Steimling earned her rara avis label after 10 years as a self-described professional student, she told the small group of poultry industry specialists attending the seminar.

In that decade, she earned a bachelor’s degree in animal science at Penn State with concentrations in poultry and avian science, graduating in 2014. From Happy Valley she decamped to Ohio State (she apologized to the group for her four OSU years) where she earned a Doctor of Veterinary Medicine with a concentration in poultry science.

When she graduated last year from vet school, she returned to Penn State as an assistant clinical professor and a resident in avian medicine and pathology with the animal diagnostic lab at University Park.

Along the way, she picked up scholarships, honors and awards too numerous to mention here.

It’s been an interesting journey for the woman who grew up in the woods near southcentral Pennsylvania’s Caledonia State Park. As a high school student, she worked at the Land of Little Horses, a performing animal theme park in Gettysburg. She still loves horses, but became interested in birds while at Penn State, ultimately shifting her career focus to the poultry industry.

Steimling’s residency at PSU is a first for the university. It is a two-year program sponsored by Best Veterinary Solutions Inc., an Ellsworth, Iowa, company with six U.S. locations, one of which is in Mechanicsburg, just outside Harrisburg, Pennsylvania. The residency, Steimling hopes, will help in her quest for board certification by the American College of Poultry Veterinarians. The ACPV currently has 295 rare bird members in good standing in the U.S. and Canada.

In her 45 weeks on the job so far, Steimling spent about half her time in the field visiting flocks on behalf of her corporate sponsor. She spent another 25 days attending conferences and seminars. Most of her days have been at the Penn State diagnostic lab, where she cuts up dead birds — broilers, layers, turkeys, guineas, pigeons, game birds, wild birds, backyard birds and pet birds — to see why they died.

The Lancaster seminar was scheduled for lunchtime. As the attendees were eating, Steimling invited them to play a game of sick bird Jeopardy. She hooked her computer up to a slide projector and lit up the wall at the head of the room with the familiar grid from the TV game show.

While correct questions for each of the answers (If you watch Jeopardy on TV, you know what that means. If you don’t watch, it doesn’t matter.) were worth from $100 to $500 apiece, Steimling works on the university’s dime, so the best prize she could give for a correct question was a bag of M&Ms.

The quiz centered on the kinds of things Steimling looked for in necropsies at the animal diagnostic lab. Things like bronchitis, worms, nutritional deficiencies — pictured in all their vivid dead color. More often than not, responses from the audience were spot on, because this particular group of poultry specialists knew their dead birds.

It was a lively and fun way to share knowledge about serious bird health issues, and maybe a harbinger of Steimling presentations to come.

But there was at least one person in the room — a not-particularly-squeamish reporter — who was happy that the main course for lunch was beef.