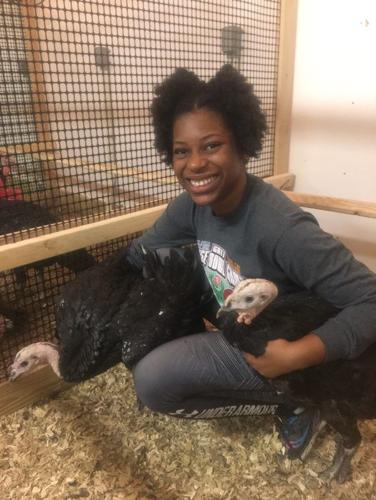 Arianna Ferguson holds one of her turkey projects. 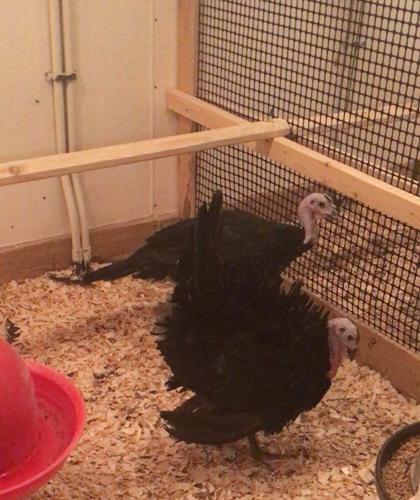 This study evaluated heritage turkey performance with a naturalized feed versus a commercial feed mix.

Arianna Ferguson holds one of her turkey projects.

This study evaluated heritage turkey performance with a naturalized feed versus a commercial feed mix.

The typical turkey gracing holiday tables this season is a modern, white-feathered bird.

Yet, many cooks are interested in serving heritage turkeys instead. That interest is the cornerstone of a research project by Paul Patterson, a Penn State poultry science professor, and Arianna Ferguson, a Penn State Millennium Scholar.

“We were looking at new ways to raise these organic birds to meet the all-new demand for them,” Ferguson said.

The project evaluated the performance of heritage turkeys using natural feedstuffs. The study is not complete, but the initial results look promising.

Patterson set up the trial to target the holiday sales period. He met Ferguson after she was selected for the Millennium Scholars Program, which requires her to conduct research as part of her scholarship.

Patterson said there are not a lot of studies evaluating the feed intake and performance of heritage- breed turkeys.

Their study focuses on the performance of Artisan Gold turkeys in a trial with six pens of turkeys.

The feed mix was designed to encourage the birds to consume the natural feedstuffs, such as earthworms, black soldier fly larva, mushrooms, alfalfa pellets, berries and nuts.

To determine their feed conversion, the birds were weighed weekly and their feed intake was measured.

Tracey Coulter, a forester with the Pennsylvania Department of Conservation and Natural Resources, helped find the natural feedstuffs for the turkeys.

“We noticed over the weeks of the trial, the birds on the natural treatment tended to be eating a bit more than the control,” Ferguson said. “Not a significant amount, but it’s something we have noticed.”

She is still working up the statistical analysis for the study to verify her observations.

The birds really liked the blueberries, Patterson said. “There are some of the foods that we have given them that they really like and others that they are less keen on and we’ve seen a lot less consumption on.”

Juneberries were not popular, and the turkeys tended to play with the nuts instead of eating them.

The trial started in the summer. The hens will be processed around Dec. 4 at about 16 weeks of age, and the toms around Dec. 15.

The birds will be parted out so Penn State’s meat labs. Ferguson and Patterson will compare the yields of the parts as well as the total.

Ferguson continues to crunch the numbers to determine whether there are differences between the two groups of birds.

To date, the birds on the natural-feed diet have tended to weigh more than those in the control group, but the real test will be in a later study when the birds are moved to an outside setting.

In a silvopasture system, the poultry would be able to eat natural feedstuffs as they find them instead of the natural feed being provided next to manufactured turkey feed.

Patterson said he has a cooperator who is willing to provide the land to set up the next phase of the study.

They will plant berry shrubs, nut trees and forages there this spring to prepare the site for a future set of birds.

Patterson said a silvopasture turkey system has potential. All of the natural feedstuffs are grown in Pennsylvania.

“I think there are a lot of places this could work,” he said. It’s a system designed for a high value market and could be scaled up or down to fit a farmer’s preferences.

“As we have looked into this marketplace, I am shocked at the prices people are getting for these heritage birds,” Patterson said.

Heritage turkeys are in peak demand for the holiday season but taper off the rest of the year. The study is following that demand curve as well as the natural succession of plants available on pasture.

Ferguson will present her findings in January at the International Poultry Expo in Atlanta.

“I am pretty new to birds, so this is all interesting to me,” she said.

Turkeys were not Ferguson’s first pick when she started the scholar program. However, she’s discovered that it’s an interesting field, even if you come from the Philadelphia suburbs.

“This is a very good learning experience,” she said, and she’d like to see something grow out of the project for other city kids.

“A lot of us don’t know where our food is coming from and where the term organic bird or naturalized bird is really coming from,” Ferguson said.

Although the turkeys did perform well in Ferguson’s project, bird behavior will be different in a silvopasture system.

“I think they will be challenged in a wild setting,” Patterson said. “Birds really preferred the commercial feed. They are going to have to be motivated to seek out and consume these other feedstuffs.”