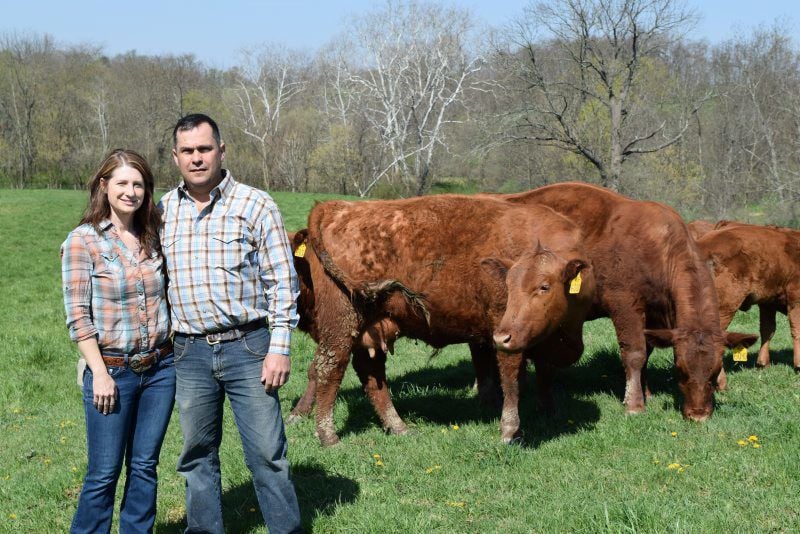 Amy and Rob Hess stand with some of their first-calf heifers at Bow Creek Farm in Hershey, Pennsylvania. 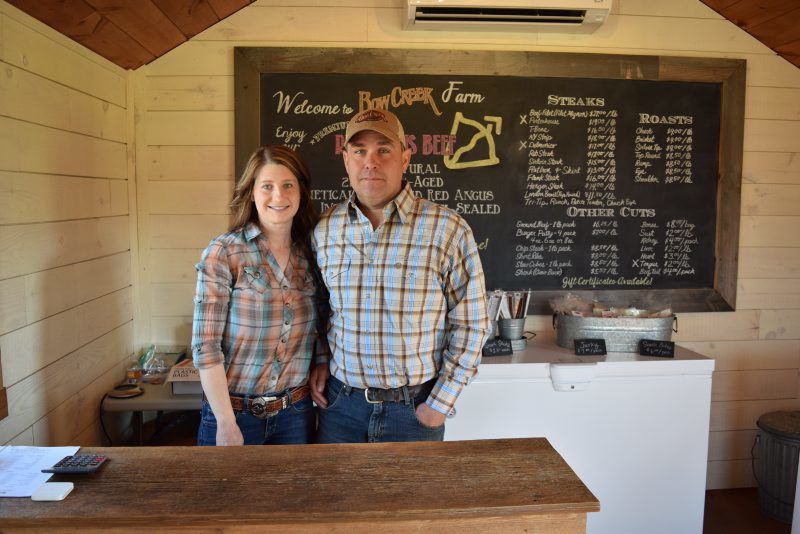 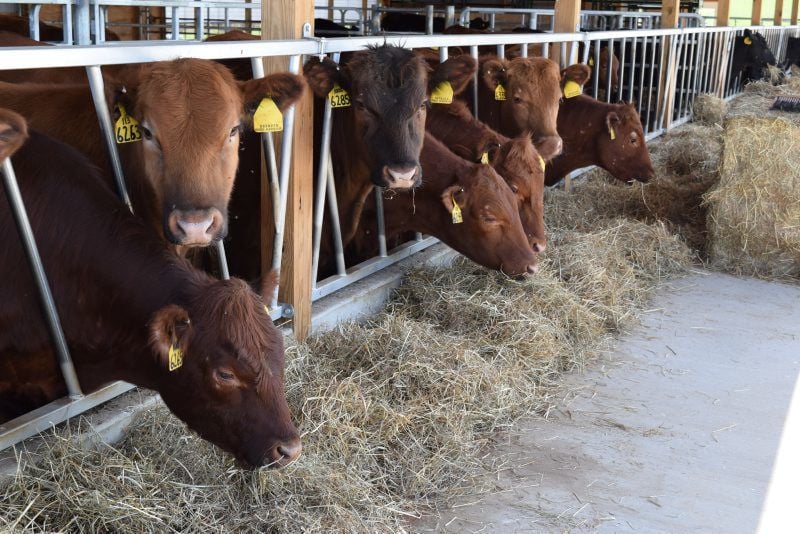 Young Red Angus peek out of the barn. 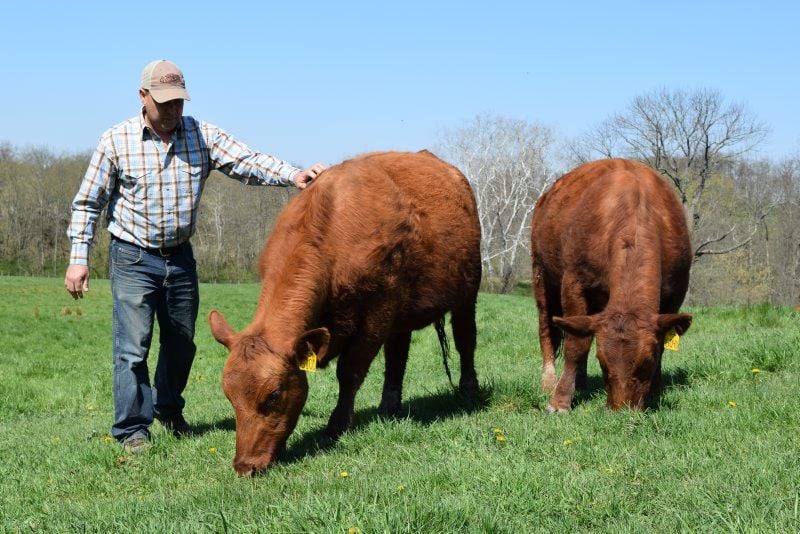 Amy and Rob Hess stand with some of their first-calf heifers at Bow Creek Farm in Hershey, Pennsylvania.

Young Red Angus peek out of the barn.

But thanks to a few big breaks and some careful planning, they have turned Bow Creek Farm into a full-time business that provides beef to one of the Harrisburg area’s finest restaurants.

It’s all been a process of gradual growth.

Rob Hess worked on farms while he was growing up and eventually wanted to have his own, but he began his career in real estate.

He and Amy raised feeder cattle for a while before starting a cow-calf operation in 2005 with five Red Angus females.

“At that time, we really were only interested in cows and calves, growing the numbers and potentially selling a couple registered calves,” he said.

But in 2009 a representative from the Red Angus Association of America visited the farm and told the Hesses they should flush one of their cows for her embryos.

“I thought he was full of it,” Rob Hess said.

He put off the idea for a year or two before getting a second opinion from a local cattleman who agreed that the cow should be flushed.

One of those embryos became the bull Bow Crk Heavily Armed 310A.

He was named the Red Angus champion at the Keystone International Livestock Exposition in 2014 and 2015, and the reserve fall bull calf at the big stock shows in Louisville, Kentucky, and Fort Worth, Texas.

The bull, since sold to a South Dakota ranch, remains the pinnacle of Bow Creek’s genetic accomplishments.

“We definitely know we got lucky,” Rob Hess said. “We bought one real good female, and it wasn’t because we studied cattle for 20 years. We just happened to fall into this.”

The Hesses have since backed off on showing because of the expense, but they’ve gained a new appreciation for excellent genetics.

In breeding decisions they focus on expected progeny differences, statistics that predict the performance of an animal’s offspring.

The Hesses also value heritable meat quality traits, like marbling, and they believe that good offspring need to come from good females.

“To expect a bull to change your herd on its own would take generations,” Amy Hess said.

When the economy soured a decade ago, the Hesses decided they wanted to make more money from the farm.

Rob Hess wrote a letter to The Hotel Hershey, a palatial resort that crowns a hilltop just a few miles from the farm, and offered to sell them local beef.

Hess and the hotel team agreed to start small — 15 animals the first year — but the hotel soon upped its order.

Hess now sells the hotel about 30 cattle a year based on a schedule he receives a year in advance.

The space at the slaughterhouse, Smucker’s Meats in Mount Joy, has to be booked even farther ahead.

Capacity at USDA-inspected custom slaughter plants is tight, and the Hesses worry it could limit their ability to expand.

Their situation is particularly tricky because they get all of their meat dry aged for 21 days, and cooler space is in high demand.

The couple adopted dry aging at The Hotel Hershey’s request, but “we believe that it really does make a difference” in the quality of the meat, Rob Hess said.

Despite the Hesses’ growing market for beef, hay was actually the farm’s top-selling product until about four years ago.

The Hesses were making more than 30,000 small bales a year before they bought a big baler in 2005.

Naturally, hay forms a major part of the cattle’s diet, though the Hesses also grow grain to feed during finishing.

The newest addition to the farm is a small retail shop, which opened in January.

Amy Hess had been considering opening a store for some time. She and Rob had been selling cattle shares, mostly quarters, but some potential customers couldn’t handle that much beef.

The store provides an outlet for the increased production capacity — the Hesses recently put up a new barn — and it reduces the risk that comes with relying on a big wholesale account.

“We wanted more room to have animals on feed,” Rob Hess said. “The store, through the diversification, gave us the guts to spend the money on the barn.”

The store also provides a market for a few value-added tallow products, such as lip balm.

Again wary of promising more than they could deliver, the Hesses have only advertised a little bit on Facebook and in a local newspaper, and the store is open just two days a week.

After a few months, though, sales have been encouraging, and the shop is getting as many new faces as returning customers.

“It was a little more work than what I had anticipated, but it’s been fun, and I think it’s well worth the effort,” Amy Hess said.

One of the biggest challenges could be managing the supply of popular cuts versus ground beef.

The Hotel Hershey buys the entire animal, so the Hesses hadn’t faced that conundrum before.

They recently found a restaurant to buy ground beef from them.

Amy Hess acknowledges the farm’s business model — selling beef to a swanky hotel and retail customers — wouldn’t work for a remote Western feedlot, but it suits the Bow Creek herd of 35 to 40 females.

The Hesses’ children, Levi and Anna, are starting to get involved with the farm — Levi mostly with the tractors, Anna with the animals.

And despite the frequent challenges of farm work, raising a beef animal from breeding to sirloin provides a potent sense of purpose and accomplishment.

“I’m doing something that I truly enjoy,” Amy Hess said.