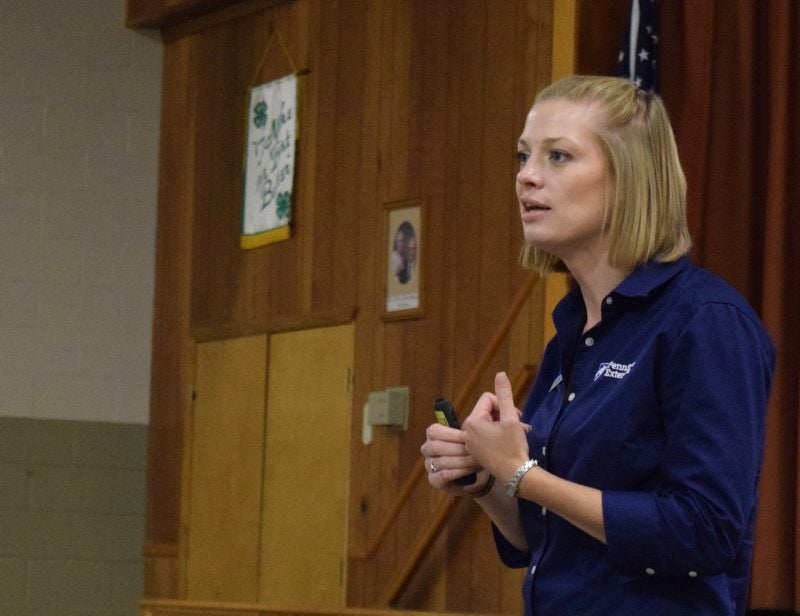 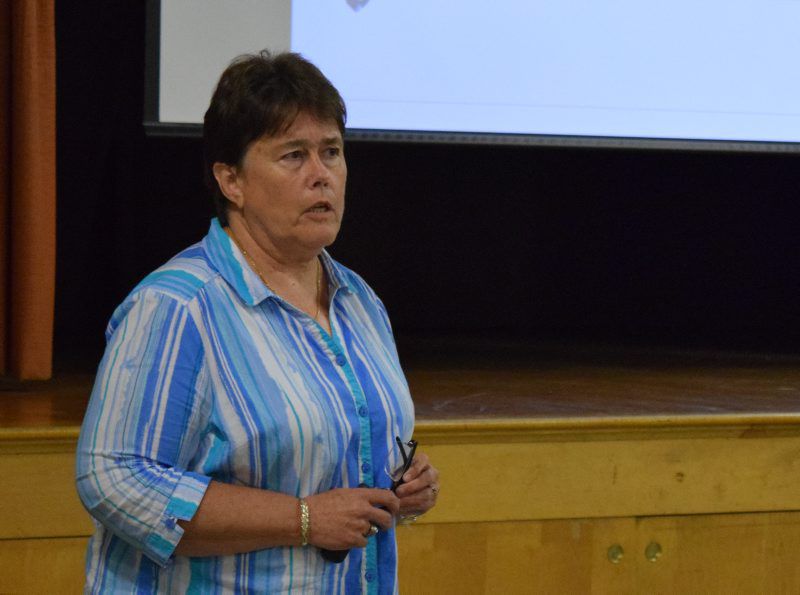 In addition to being pulled away from its mother, the calf may have to go through vaccination, implantation, castration and a long truck trip to a new farm.

“There’s a tremendous amount of stress during this age,” said Tara Felix, a Penn State professor and Extension beef specialist.

Farmers need to make the transition to the feedlot as easy as possible. If calves become ill at this stage, they will never catch up to their pen mates in performance or carcass quality, Felix said during a Sept. 19 cattle producer meeting at the York County 4-H Center.

When they first arrive at the farm, calves should be given water and medium-quality grass hay.

A trough fed by a hose with a continuous flow works well because it lets the calves see and hear water. It’s a more obvious presentation than a water cup, which the calves may have never seen before.

To choose the kind of hay, farmers should ask the seller what the calf has been started on. “I like it to be a familiar feed,” Felix said.

Long-stem grass hay is good at this stage because it is more effective than high quality hay at filling up the calves’ bellies.

Calves generally need 21 days before they start eating right at the feedlot.

The incoming calves will have a wide range of feed intakes, so farmers need to use these first three weeks to tighten up the group.

Farmers should limit intake at first. If the calves can come up to the bunk whenever they feel like it, they will develop inefficient feeding habits.

The cattle should be a little hungry when the farmer comes to the pen. “Make them know that you mean feed,” Felix said.

Cattle producers too often underfeed protein during this period.

“We hate revisiting the protein because the protein’s expensive. It’s really expensive. But guess what’s more expensive? That 400-pound calf that’s not growing in your feedlot,” Felix said.

Calves need to be eased onto a grain-based diet. It takes time to train the rumen microbes to the new feed.

The grain percentage can be stepped up every five to seven days depending on how the calves are doing. It’s better to go slowly than to cause problems later, Felix said.

Using some forage in the diet may improve performance, but Felix does not like offering a free-choice round bale. Letting the calf decide what it wants to eat defeats the purpose of a nutrition program, she said.

Pennsylvania’s long history with dairy can make beef farmers too fussy about processing feeds. Beef forages and grains do not need to be broken down as much as they do for milk cows, she said.

Beef farmers also don’t need to worry about concocting rations with a bunch of ingredients. Four are usually sufficient. “Keep in mind the practicality of the diet,” Felix said.

Rations that deliver the right protein and energy can be wildly unrealistic.

In a class exercise, one of Felix’s students created a ration that was 12 percent soybean oil, way too viscous to feed. Another threw in a dangerously large dose of a coccidiosis medicine.

Some ingredients, such as blood meal and cottonseed, should be skipped in Pennsylvania beef rations because they are just too expensive, Felix said.

As the calf shifts to a grain-based diet, farmers have a number of feed options.

High-moisture corn gives the cows a lot of energy, but the farmer is more or less committed to feeding it on the farm.

Steam flakers provide just as much energy as high-moisture corn but at a much higher cost. “Leave the steam flakers in the Panhandle,” Felix said.

Corn silage, common in Pennsylvania, is good for growing calves but not for finishing them.

Small grains need to be cracked so the microbes have access to the maximum surface area as the small particles move quickly through the calf’s system.

A calf’s road to success starts before it even hits the feedlot.

Small farmers who pool their cattle all need to follow their group’s preconditioning program. “One bad actor can kill it for everyone,” Fairbairn said.

That means meeting weight and breed requirements, delivering all of the cattle at the same time, and bringing the number of cattle that were promised.

Some farmers want smaller calves, but bigger feedlot operators typically want larger calves because they can feed them hard quickly and turn out finished cattle faster.

A calf should not be sent to the feedlot if it has had a chronic illness, an undescended testicle or may have been bred. Castrated cattle should be healed before they get to the feedlot.

Getting the calves accustomed to people is a big help to the feedlot owner. “There’s nothing worse than that pig piling” of skittish cattle, Fairbairn said.

On May 18, 2021, Pennsylvania residents will have the opportunity to vote on a ballot measure that would limit a governor’s disaster declaration to 21 days unless extended by the General Assembly. Here's what lawmakers, commentators and Lancaster Farming readers have to say about the issue.  Read more