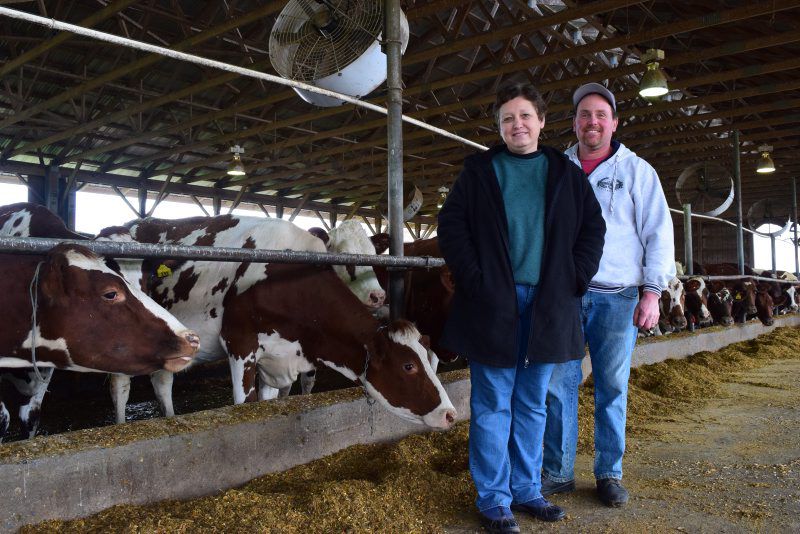 Pam and Don Gable of Conebella Farms stand among their herd of of Ayrshires. 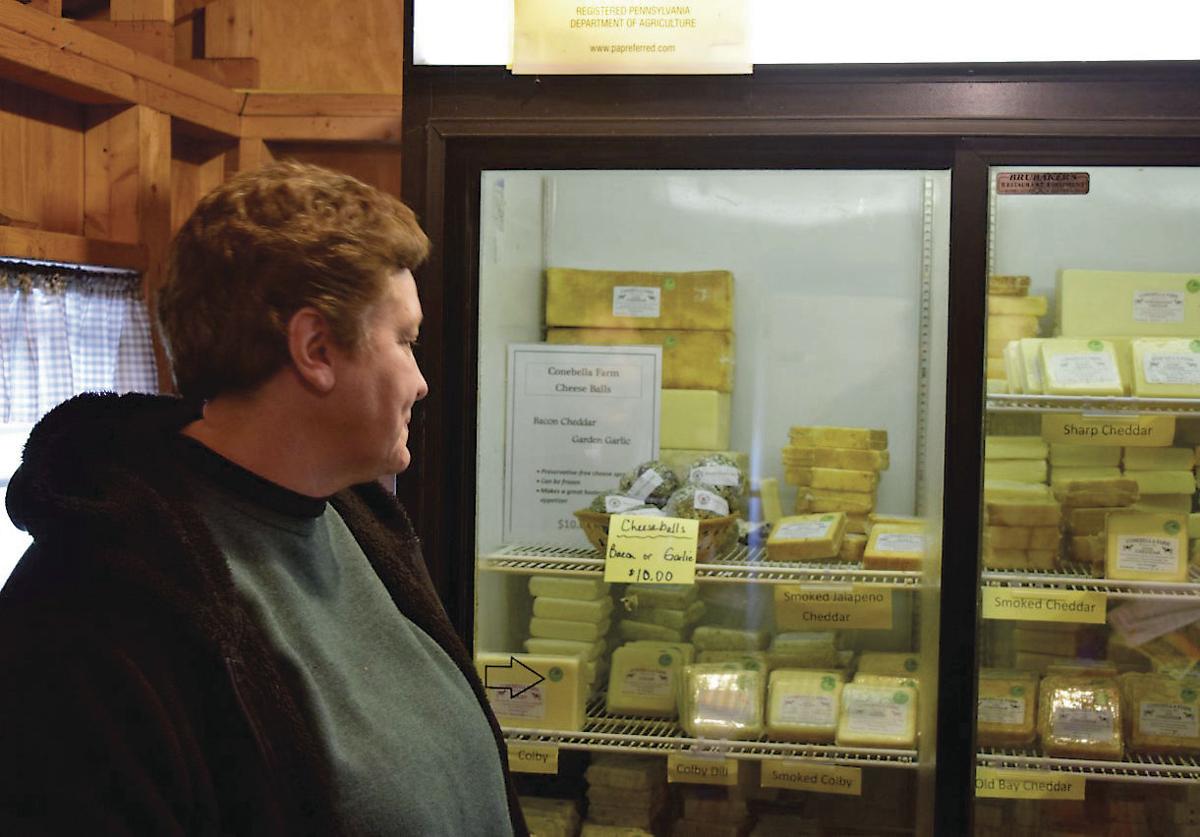 Pam Gable shows the wide selection of raw milk cheeses and cheese spreads offered for sale. New to the cheese line-up are cheeseballs for the holiday season. 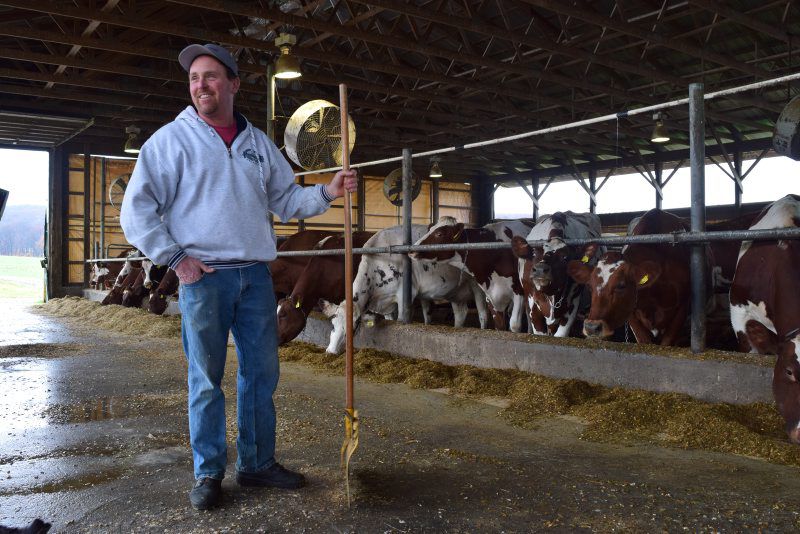 Don Gable of Conebella farm smiles as he talks about the history of the family farm and the work they do to make a quality product.

Pam and Don Gable of Conebella Farms stand among their herd of of Ayrshires.

Pam Gable shows the wide selection of raw milk cheeses and cheese spreads offered for sale. New to the cheese line-up are cheeseballs for the holiday season.

Don Gable of Conebella farm smiles as he talks about the history of the family farm and the work they do to make a quality product.

ELVERSON, Pa. — The Gable family has been in a holiday mood since September, preparing for the farm’s annual cheese rush.

“We feel like we have been in Christmas mode for a while,” Pam Gable said.

Conebella Farm in Elverson is home to a nationally recognized Ayrshire herd and has had an Amish cheesemaker craft a portion of its herd’s milk into raw milk cheeses for the past 10 years.

The decision to enter cheese-making resulted from a dairy downturn in the mid-2000s. The Gables wanted to diversify to help ride out such downturns and got their first raw milk license in 2007, selling gallons and half gallons through an on-farm, self-serve store.

Not long after that, they had customers asking for cheese.

Ayrshire milk works well for cheese-making because of its fat and protein content, but the family thought establishing an on-farm cheese processing plant would be cost prohibitive.

Their technician from the Dairy Herd Improvement Association suggested contacting the Amish cheesemaker.

Cheesemakers can be in high demand with long waiting lists of clients. This cheesemaker had an opening for the first time in three years and accepted a load of milk from the Gables.

The farm has expanded its offerings to include 14 cheddar and colby raw milk cheese flavors in nine years. The Gables work with another food vendor to turn their cheeses into cheese spreads.

Pam Gable said the spreads are a “pub-style cheese.”

New this season are cheese balls. “We started three weeks before Thanksgiving and were shocked with their popularity for Thanksgiving,” she said.

The Gables also sell large and small gift boxes that can be customized with a pick of cheese and spreads. They also sell a sampler pack.

Returning gift-box customers want something to add to the pack, Pam Gable said. This year’s latest edition is a “garlic lovers” sampler pack along with the cheese-ball option for gift boxes.

The cheese is marketed at the farm, at farmers markets and to wholesale accounts.

Pam and Don Gable attend different festivals through the year and say sampling is a key to sales. Don Gable said they always sell more of the five cheeses that are available for sample at their farm market stand.

The Gables’ success starts with the ladies of the farm, their Ayrshires. It’s a closed herd descending from the 10 Ayrshires that Don Gable’s grandfather Harold Gable purchased in 1938.

The herd is registered under the Conebella prefix. Don Gable’s father, Charlie, came up with the name. It’s a blend of the two railroad crossings near the farm — the Conestoga on the west and the Isabella on the east.

The 110-cow herd produces an annual average of 19,000 pounds. The cows are milked twice a day. About 10 percent of the milk is diverted to the cheese business. The balance is marketed through the Lanco-Pennland cooperative.

Currently, she is ranked fourth. Another two were listed in the top 10 in August.

The farm received the association’s 2015 Master Breeder Award and was one of the stops on the World Ayrshire Tour this fall.

The farm consists of 198 acres, plus an additional 320 acres of rented ground.

The Gables raise all of the forages and corn grain for the dairy herd. Feeding an Ayrshire herd is an art form that differs from the conventions for rations for Holsteins and Jerseys.

An Ayrshire’s dry matter intake and nutritional needs fall between the two breeds.

Don Gable said if you think of a Jersey as having a four-cylinder engine and a Holstein an eight-cylinder, then a Ayrshire would have a six-cylinder engine.

The Gables’ sons, Josh, Tyler and Kevin, have diversified the farm further by developing a hay business.

Kevin and Tyler Gable manage most of the cropping and hay duties at the farm. They sell mixed, timothy and orchardgrass hay for the horse market.

The Gables sell both small and large square bales, all of it forage tested. They have also created a market for “low sugar” hay for diabetic horses.

Don Gable said the family sells only its own hay and will not purchase hay from other sources. The operation uses a cash on delivery system.

Kevin Gable said people like the fact that it is local hay. Horse breeders typically select hay based on its color and smell.

One of the Gables’ most recent moves was to spin off the cheese business into its own limited liability company.

Pam Gable said running the three businesses as one entity was becoming an accounting headache.

Don Gable said it also allows the cheese and raw milk business to be evaluated independently from the dairy farm.

The LLC buys the milk for the same price the Gables receive for their milk from the cooperative.

Don and Pam Gable say they keep encouraging their sons to evaluate where their future might lie, whether it is with their dairy or another agricultural pursuit.

Based on the evolution of the farm under their direction, Don and Pam Gable expect change will be a constant for the farm.