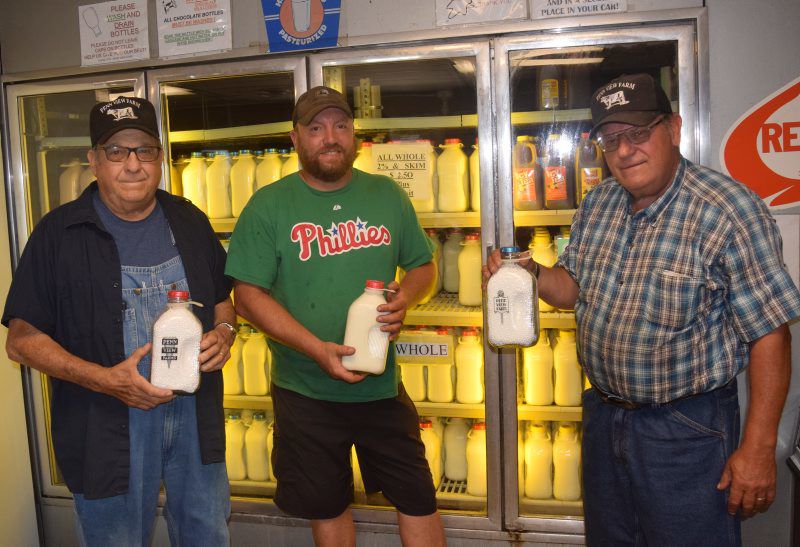 From left, Paul, Mark and John Hockman hold glass bottles of milk in their store. 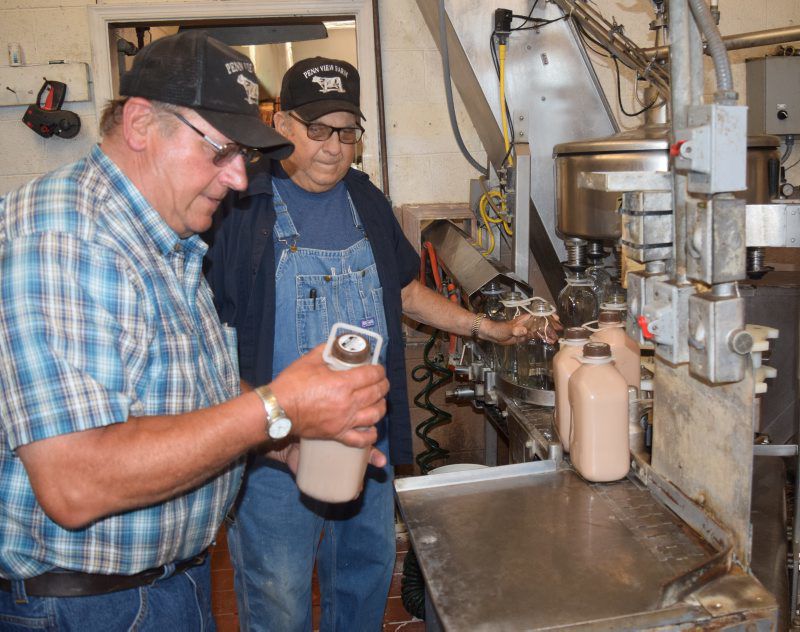 From left, Paul, Mark and John Hockman hold glass bottles of milk in their store.

PERKASIE, Pa. — When John and Paul Hockman, along with their father, opened their Penn View Farm store in 1970, bottling milk in glass bottles was fairly common.

Today, it’s rare for farmers to bottle milk, and even rarer to use glass bottles.

But 50 years later, the Hockmans are still going strong — glass bottles and all.

Penn View Farm was converted from a crop and potato farm to a dairy farm when the Hockmans’ father purchased it in 1941.

About a year and a half ago, Paul had to step back from his work on the farm due to health issues. Soon after, the family decided to stop milking. However, the Hockmans wanted to keep bottling, so now they get milk from another local farm.

And though the Hockmans no longer milk, they’re not out of the cattle business.

They’ve transitioned to raising Holstein heifers that they are crossing with Angus bulls.

Along with selling milk and beef, the store offers seasonal produce, eggs and ice cream, all from local farms.

Paul said he and his brother “enjoyed farming too much to get into entertainment.” But John’s son, Mark, has some ideas about adding agritainment to the portfolio.

Mark has discussed adding hand-dipped ice cream along with a corn maze. He feels confident that with the store’s already strong customer base, a few fun family activities would do well.

When the store first opened, there were over 300 “juggers” — farms that bottled their own milk — in the state. John said that many juggers started to go out of business in the late 1980s. Now there are only a handful.

The store did well when it first opened because it functioned as the local convenience store, John said. There were few grocery stores in the area in the 1970s, and modern-day convenience stores didn’t exist.

Now, even with convenience stores and supermarkets close by, Penn View Farm is still attracting customers.

“People want to know where their product comes from,” Paul said.

The Hockmans said they saw an increase in customers because of the coronavirus pandemic. Many new customers stopped in the store because they didn’t want to go to potentially crowded grocery stores. Penn View Farm also had coveted items such as milk, eggs and beef in stock when grocery stores did not.

That trend has calmed a bit, but the store is still making more sales than it was pre-pandemic.

John said that the family operation “sticks to the basics,” which seems to be working.

Chocolate milk and eggnog are the most popular products at the store. The milk is sold in half-gallons because glass gallon bottles are too heavy.

The store mainly attracts local customers, but there are some regulars who travel from New Jersey to get Penn View Farm milk.

Using glass bottles is important for the Hockmans.

Paul says that the milk is better and colder in glass bottles compared to plastic.

Penn View provides milk to about a dozen farm markets, most of which specifically want to sell milk in glass bottles.

Customers at the farm store pay a bottle deposit, which they get back when they return the glass containers.

The Hockmans get most of their bottles back, but they know that they lose some. They sometimes wait a year before getting a bottle back, as some customers only stop in yearly to get eggnog.

Processing milk is a time-consuming business, Paul said. The Hockmans process about 4,000 gallons per week.

“Farmers are a rare breed,” John said. Processing milk requires the family members to be independent and consumer-oriented.

Because of the coronavirus, the store now has a limit on how many customers can come in at one time. Six-foot floor markers and a plastic shield at the cash register are also used.

While the brothers are busy with processing and John’s wife is running the store, Mark has taken to boosting the store’s visibility on social media.

Mark recently posted about bottling milk for 50 years, and the message reached over 25,000 people, he said.

The farm consists of 130 acres plus another 550 rented acres. The family grows corn, soybeans, wheat and hay. The crops were originally grown for feed but are now sold as cash crops.

As for the farm’s name — Penn View Farm — it came from a story about when one of the barns was built back in 1916. Supposedly, Paul said, the farmers could see the statue of William Penn atop Philadelphia’s City Hall from the spot where the barn was built.

With 50 years of bottling and selling milk under their belts, the Hockmans don’t plan to stop any time soon.

“If you’ve got a good product, people stick with you,” Paul said.