Phoebe Bitler and her family were already starting to think about the next step for their dairy farm. Then a barn fire forced them to make a decision.

Almost six years later, the Bitlers have settled in to a new robotic milking barn, and they have weathered a pandemic that continues to upset the dairy markets.

“I personally believe God closes some doors on us and opens others for us. There were many prayers asking for wisdom and guidance in moving forward following that challenge,” Bitler said of the fire.

Before the December 2015 blaze, Bitler and her family — husband Dave, son Jesse and daughter-in-law Becky — found themselves milking in two barns of 80 cows. It was an inefficient system that depended on moving cows frequently.

“It was such an ordeal,” Bitler said.

The fire destroyed a barn the Bitlers were renting near their home farm. The family lost more than 40 cows, mostly Jerseys.

The blaze is believed to be arson, though no one has been charged with setting the fire, Bitler said.

With a key piece of their milking infrastructure gone, the Bitlers decided it was time to consolidate and update their operation.

Aiming to milk 240 cows, they built a bedded pack barn with two AMS Galaxy robots. Each robot has two boxes that cows can enter for milking.

The robots have been running smoothly but must be managed differently from a run-of-the-mill freestall barn.

Ration formulation is the most obvious change. Instead of delivering all of the cows’ nutritional needs at the bunk, the Bitlers need the cows to crave enough energy to be enticed to the milking box, where they get a pelletized snack.

“We say all robots will work — will do their job. It’s the people that have to learn,” Bitler said.

With a few years to plan for the robots, the Bitlers also had time to breed for good teat placement. Robots have difficulty finding teats that are too close to each other. 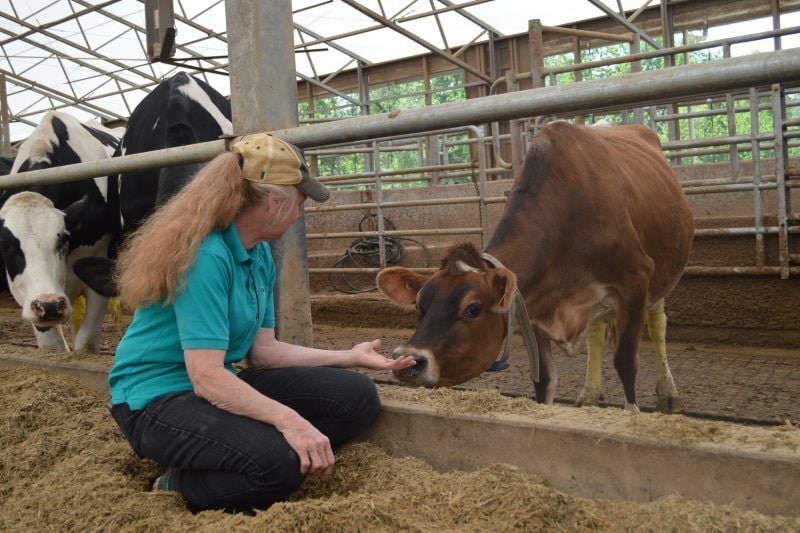 Phoebe Bitler interacts with a cow at Vista Grande Farms in Fleetwood, Pa. 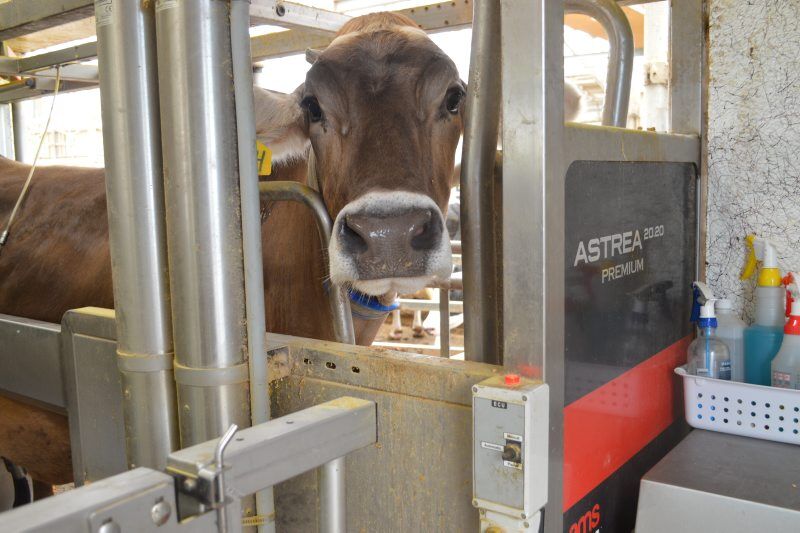 A Brown Swiss peeks out of a robotic milking unit at Vista Grande Farms. Phoebe Bitler says the new barn and milking system have increased the farm's efficiency. 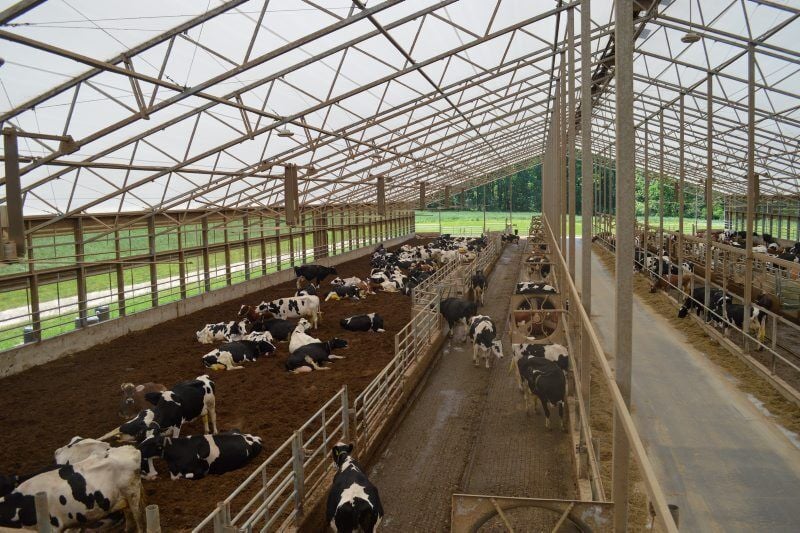 Cows lie on the bedded pack at Vista Grande Farms in Fleetwood, Pa. 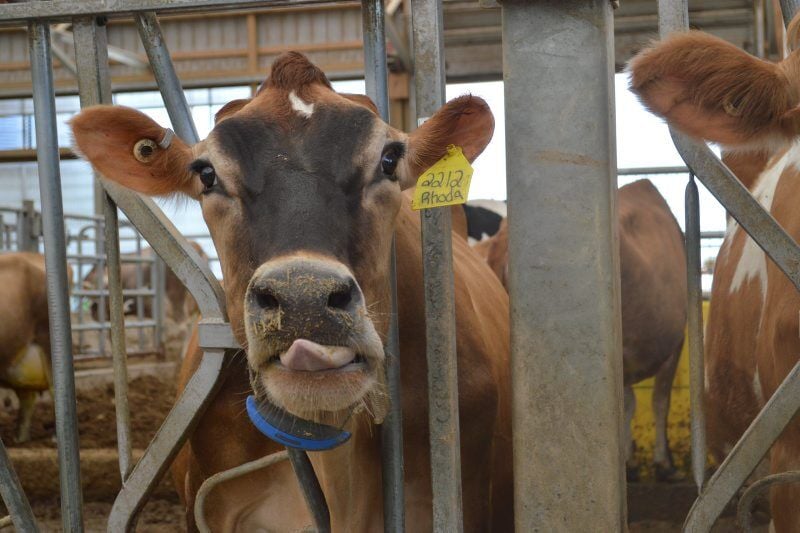 A Jersey takes a break from eating at Vista Grande Farms. The farm mostly has Holsteins but keeps other breeds in small numbers. 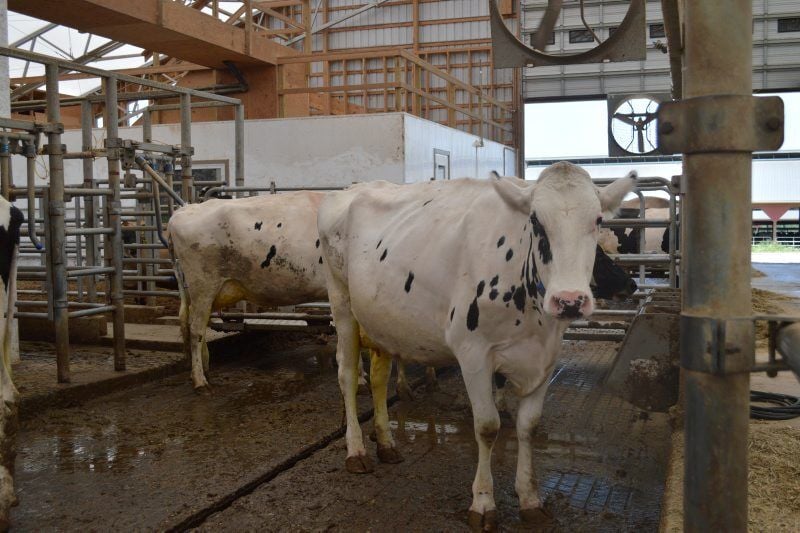 A cow stands near a robotic milking unit at Vista Grande Farms in Fleetwood, Pa.

Phoebe Bitler interacts with a cow at Vista Grande Farms in Fleetwood, Pa.

A Brown Swiss peeks out of a robotic milking unit at Vista Grande Farms. Phoebe Bitler says the new barn and milking system have increased the farm's efficiency.

Cows lie on the bedded pack at Vista Grande Farms in Fleetwood, Pa.

A Jersey takes a break from eating at Vista Grande Farms. The farm mostly has Holsteins but keeps other breeds in small numbers.

A cow stands near a robotic milking unit at Vista Grande Farms in Fleetwood, Pa.

The Bitlers had time to plan because the permitting process for the new barn was rather lengthy. The farm sits in a high-quality watershed.

And though the Bitlers moved the cows into the new barn in early 2018, they’re still finishing up the permit requirements. Some stormwater ponds were to be created only after the building was up.

“Those permits are like a five-year thing. I know why they’re five years — you can’t do it any faster than that because of all the regulation,” Bitler said.

Though she takes her own situation in good humor, Bitler said onerous regulations are a hindrance to Pennsylvania’s dairy industry.

The bedded pack is a more welcome feature of the new barn. Softer than plain concrete, the surface has contributed to cow longevity.

In fact, the Bitlers still milk some cows that survived the 2015 fire, making them 8 to 10 years old. Bitler doubts those cows would have reached such a grand old age in a tie-stall setting.

The cows do seem to have taken to the more comfortable floors.

“You’ll go out there and you’ll see them like laying flat out like they’re at the beach or something,” Bitler said.

Bitler’s parents moved to Berks County in 1954, shortly before she was born. Her parents had been farming in Montgomery County, but they decamped when the Northeast Extension of the Pennsylvania Turnpike was laid out nearby.

They took their farm name, Vista Grande, with them to the new place in Fleetwood. Bitler later learned that a previous owner had given the farm a similar name — Grandview.

Bitler got a degree in home economics education from Albright College and met her husband in 4-H.

They farmed for a few years in Little Britain, near where Dave had grown up in Lancaster County, before returning to Vista Grande to buy out her parents in 1979. The Bitlers bought out Phoebe’s brother’s share in the business seven years later.

Today the Bitlers farm 475 acres, about 280 of which they own, and they milk mostly Holsteins.

The Bitlers held partial dispersals in 1999 and 2008 to offload surplus animals — about 100 animals each time. By chance, they held both sales shortly before serious downturns in the dairy industry.

Since the 1999 sale, Dave has found himself working as a cattle broker, helping to arrange sales of animals from one farm to another.

“People just started calling him up to do that,” Bitler said.

Recently Dave has moved a number of loads to farms in New York and Vermont. He has also organized several lots of cattle that were exported to Turkey.

Export projects depend on a number of factors — buyers’ ability to line up a deal, government regulations, and the availability of a ship at the right time.

But when a sale does go through, it can fetch the American farmers a better price than they would get at the local auction, Bitler said.

In addition to the changes on the farm, the Bitlers have survived the highs and lows of the dairy industry — most recently the pandemic and its aftershocks.

Vista Grande, which ships to Dairy Farmers of America, did not have to dump milk last spring. But the Bitlers did get deductions on their milk check because the processor dumped milk.

In the end, 2020 wasn’t a bad year for the farm, but that was largely because of historic levels of federal aid to the industry.

“I don’t like that we depended on the government,” Bitler said. “I would rather get paid fairly for the product and sell it than get paid just because we’re here.”

“If you can’t manage your risk with the government programs, you’re missing out (on), I’m figuring, like every third dollar,” Bitler said.

Bitler is also helping other dairy farmers understand these programs by serving as board president for the Center for Dairy Excellence. She’s in the first half of a two-year term.

The center, which receives state and private funding, already provided a lot of resources on risk management and profitability strategies before the pandemic began.

It was only natural for the center to help farmers navigate the new offerings, like the Paycheck Protection Program and Pennsylvania’s Dairy CARES aid.

“That showed there was a need and people were really interested,” Bitler said.

The Center for Dairy Excellence is far from the first organization in which Bitler or her family members have taken a leadership role.

Bitler has been active in the Pennsylvania Holstein Association, served as a township supervisor, and helped the farm earn Dairy of Distinction status.

“We’ve always been involved. That’s what I grew up with, and I guess we just always felt it was important to be a part of the industry,” Bitler said.

Bitler has even been chairwoman of the Pennsylvania Beef Council and the state Beef Quality Assurance program. The Bitlers keep a small herd of Lowline Angus in addition to their dairy herd.

Bitler helped develop BQA at the state level before the national beef checkoff adopted it.

The program’s initial goal was to assure consumers that farmers were taking care of their animals, and to reduce damage to meat through poorly chosen injection sites. The national program has since expanded in scope, Bitler said.

In any farm organization, Bitler is keen to fill leadership roles with people who are the primary decision makers on their farms. It doesn’t have to be just late-career people like her who hold the reins, she said.

Unfortunately, Bitler said, many potential leaders have little time to pitch in. After all, they’re already spending their time at home doing a good job at farming.

Despite the troubles of the past few years, Bitler is hopeful about the future of dairy farming in Pennsylvania.

“The consumers like to see the farm. I think there’s a place for it, but I see it changing far faster than I’m maybe ready to change,” she said.

Bitler feels like the dairy industry is playing catchup against the wave of plant-based competitors.

But she still believes the best promotion of the industry comes through everyday interactions with other people.

These opportunities have sometimes come when Bitler is least expecting them.

In one case, a woman who worked at the nearby Deka battery plant dropped by with her big family because she wanted to take a picture with the cows for her birthday.

Bitler was a bit surprised to have a bunch of people show up at the farm unannounced, but she played the gracious host and let the woman take photos while Bitler told her about the farm.

“Maybe (the interaction) will benefit them — and us,” she said.

That’s the kind of optimism that can help a farmer make a consumer’s day — and maybe get through a barn fire and a pandemic too.

What dairy product do you consume most often?

Dairy Farm Perseveres in the Mountains of Bradford County

Dairy farming is never easy, but Triple M Farms in the mountains of Bradford County has had to overcome more than its share of challenges.