Brian Futhey of Stone Meadow Farm in Woodward, Pennsylvania, still remembers his “aha moment.” It was when he realized that the type of grassfed milk that his cows were producing on his 118-acre farm was also ideal for making artisan, raw milk cheese.

“I was attending a Pasa (Sustainable Agriculture) conference around 2004 and a lightbulb went off in my head. My milk was special in the sense that it was all grass, I didn’t feed any grain,” Futhey said. “And it was also seasonal, so by making cheese, it gave me an avenue to have a year-round income without relying on a milk check. So that was the impetus that got me started in cheesemaking. ... It’s value-added, so you get a better return on the milk that you produce.”

Stone Meadow Farm has been in Futhey’s family since 1972 and was the family’s second farm.

“We had a dairy farm that I grew up on ... eventually my mom sold the original farm and I moved to the current farm. I acquired it in 2001 and started the seasonal dairy in the spring of 2003.”

He admits that he jumped into cheesemaking “feet first,” without having any formal knowledge. But, he did hire outside expertise and start attending educational workshops to hone his skills and expand his cheese offerings.

“I hired a consultant in the beginning. He was a Swiss immigrant, or his family was, and he grew up in Wisconsin where he was a cheesemaker. When he came to Pennsylvania, he did consulting,” Futhey said. “So, he came to the farm and got me started with a couple of different types of cheeses. ... He helped me get a feel for it and to avoid common mistakes that you might make. He also gave me recipes.”

Because the business is a solo endeavor, Futhey chooses to stay small, milking between 15-20 cows of two breeds, primarily Jerseys and a few Milking Shorthorns. He chose those two milking breeds because he is intentional about his farm being seasonal, operating from March through November. Both breeds are bred in June or July, then have calves in March and April. He said the Jersey cows’ milk has a higher fat content that yields cheese which is different from someone who has a Holstein herd, for example. 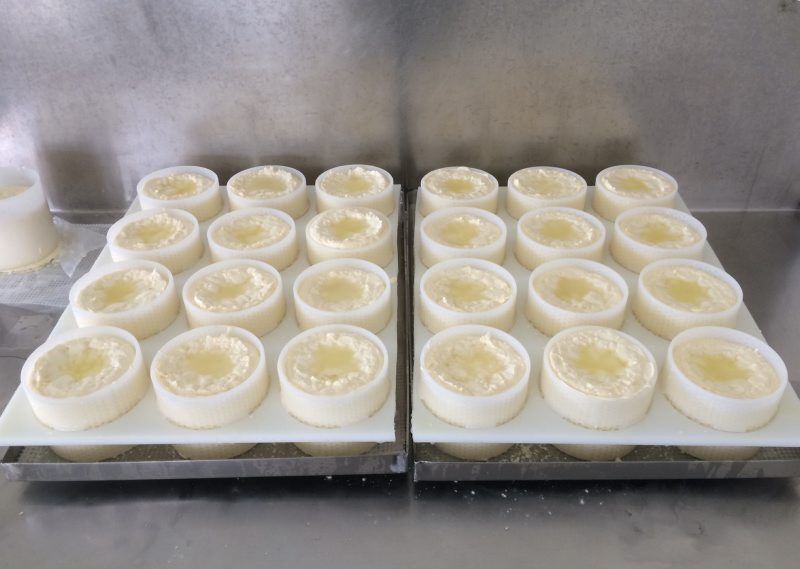 Futhey's raw cheese in the molds. He makes a variety of hard and soft cheeses. 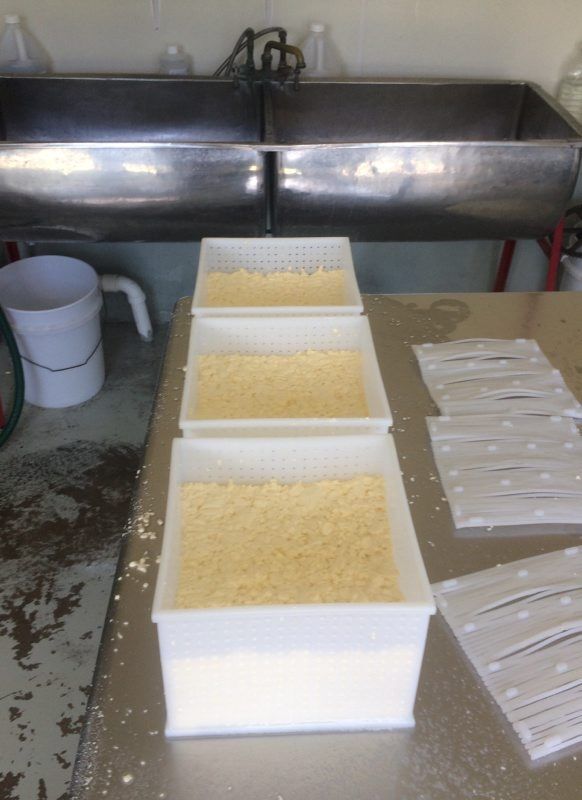 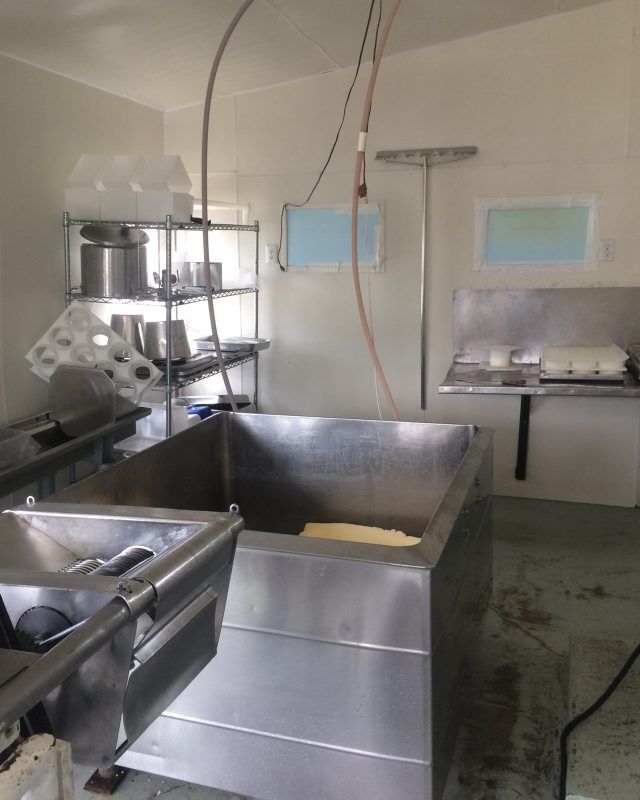 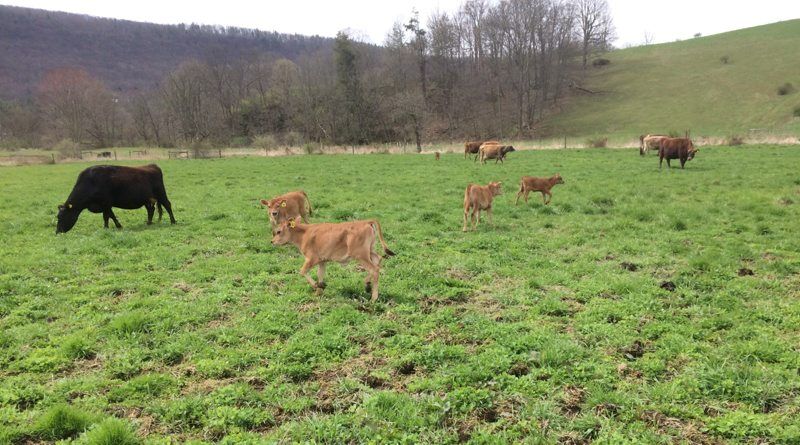 At Stone Meadow Farm, calves are all born in March and April, timed with the flush of spring grass. 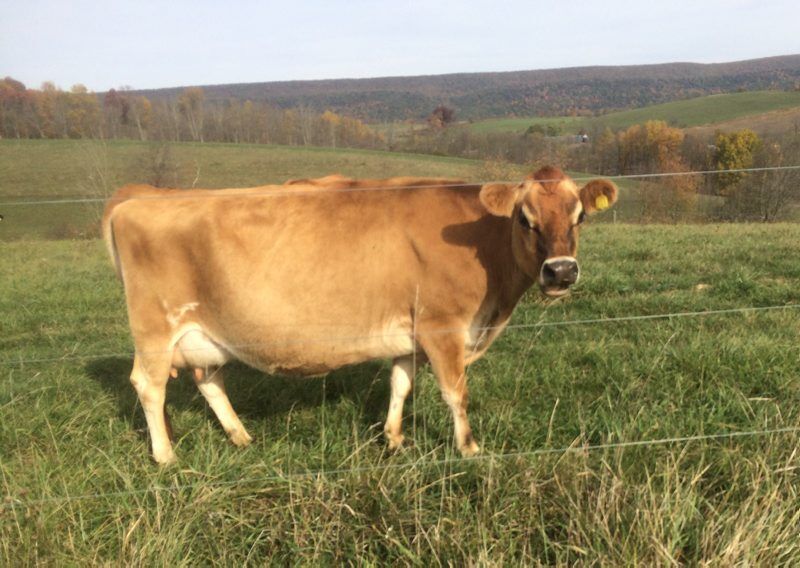 Futhey has chosen to operate his dairy farm seasonally. Here is one of his grassfed herd.

Futhey's raw cheese in the molds. He makes a variety of hard and soft cheeses.

At Stone Meadow Farm, calves are all born in March and April, timed with the flush of spring grass.

Futhey has chosen to operate his dairy farm seasonally. Here is one of his grassfed herd.

In a video produced by WPSU-TV in 2013, Futhey says, “What I’m doing is matching the lactation curve of the cow with grass growth in the fields. Seasonal farming lends a couple of advantages, especially in the dairy industry. One of the advantages is that when your cows are all having calves at the same time, you’re more focused on that particular time of the year, so from a management standpoint, it’s a little easier. It’s more intense, but then when you take the winter off, you have time to recharge your batteries. The cows get a break and you get a break.”

While he jokes about going to the Caribbean in the winter, he does still have day-to-day work on the farm throughout the winter. But, he said, it’s a more restful and restorative period, which is a critical and intentional part of his business plan.

“I grew up on a dairy farm and we milked 365 days a year,” Futhey said, “and I would not be doing anything with cattle if I had to do it that way again.”

Benefits and Challenges of Grass-Feeding

The cows at Stone Meadow Farm graze on a mixture of grass, clover and alfalfa, plus hay and kelp as a mineral supplement.

“Kelp is a good source of minerals. I mix it with Redmond Salt. Some farms with my kind of all-grass system might have 20 or 25 different minerals in front of the cows at different times; it’s like a smorgasbord of minerals. I like to simplify things, and kelp is a really good, organic mineral source,” he said.

Having an all-grass system can be a detriment though, because he is particularly susceptible to drought, which was the case in the summer of 2020 when he was forced to buy a lot of hay.

“If the grass doesn’t grow, you have to feed them something,” he said.

Overall, 2020 was a good year for the farm. The COVID-19 pandemic led to a huge uptick in business at the farmers markets and he ran out of products very quickly.

“People were locked down and cooking from home; they were afraid to go to grocery stores,” he said. “We saw so much more activity at markets. It was a boon for us since we didn’t have to close, because we were considered an essential business. Last year it was a challenge keeping up, especially with the beef, because I raise beef sometimes for 30 months to three years.”

Futhey was grateful that he had butchering slots reserved at the meat-processing plants, because they were difficult, if not impossible, to come by.

Futhey sells primarily at the Boalsburg Farmers Market near State College, Pennsylvania, each Tuesday from 2-6 p.m. along with two other markets, plus a food co-op in Pittsburgh, and health food stores in Lewisburg and State College.

“I really like the idea of a ‘foodshed,’ where you try to get as much food for yourself from a certain radius, so I set my business goal as a 30-mile radius from my farm,” he said.

A USDA processing plant is located 10 miles from the farm, helping him achieve his business goal of staying within a 30-mile radius for his beef cattle, as well.

From Education to Production: Cheesemaking

At the start of his cheesemaking endeavor, Futhey was able to secure an 11-by-20-foot walk-in cooler from a grocery store auction, which is ideal for cheese storage. The cheeses are packaged into 5-pound blocks and vacuum-sealed, then stored in the cooler on shelves. Yearly, he produces about 3,000-4,000 pounds of cheese.

Camembert cheese typically has a shelf life of 45 days, but as a result of some “tinkering with the cultures” and keeping the temperatures cooler when it is aging, he can extend it to 60 days. The Italian-style soft cheese, Taleggio, has a slightly longer shelf life of 60-90 days.

According to Futhey, the low-acid cheeses, like Colby and Swiss, can be stored for many months, but after 8-10 months, they can get an off-flavor, so they are never aged longer than a year.

“The Cheddar that I sell right now is 4 years old and gets better with a few years of age,” he said.

Futhey said there are several advantages of raw milk cheeses: they have a higher nutritional value, because the consumer is getting the entire product, and they tend to be easier to digest. He said the grassfed milk offers a different flavor profile that many consumers find appealing, as well.

For more information about Stone Meadow Farm, email bffcheese@gmail.com or visit the booth at the Boalsburg Farmers Market each Tuesday afternoon.

Meet two sisters who are bringing their grandparents’ dairy farm into the modern age while keeping traditional values.