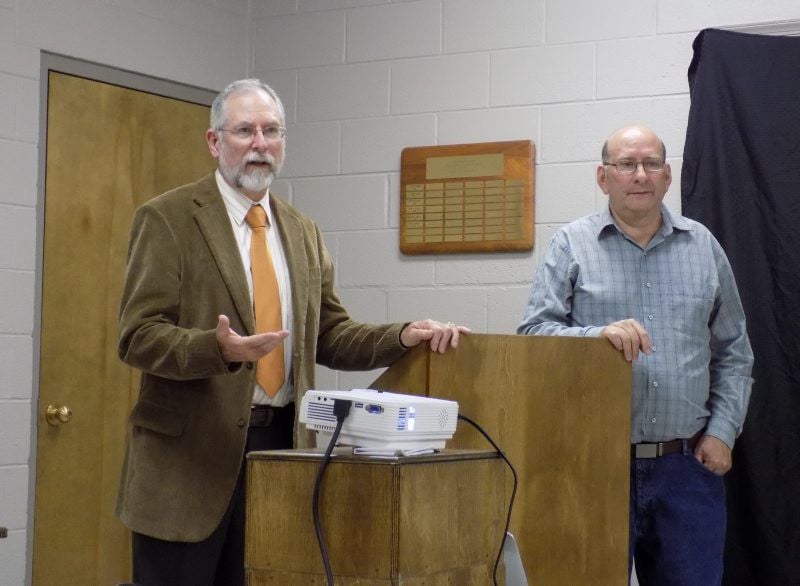 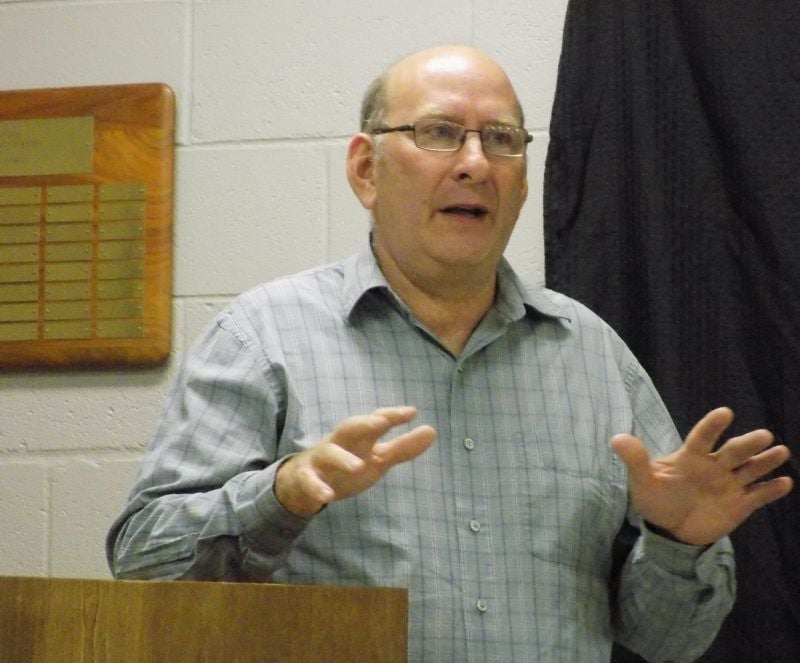 Glenn Rodes answers a question during an April 28 presentation about his two years growing hemp.

Glenn Rodes answers a question during an April 28 presentation about his two years growing hemp.

LURAY, Va. — The Rodes family has grown a number of crops at Riverhill Farms over the years, but one in particular is drawing a lot of interest.

The presentation drew about 55 people, most of them farmers, to the Luray Fire Department.

Rodes is one of two Virginia farmers to have grown hemp the past two years as part of the university’s research efforts. He’s slated to do it again this year, when he’ll be one of 11 farmers working about 90 acres of the crop.

He’s also pushing lawmakers to make it legal to grow industrial hemp commercially, fighting perceptions that the goal is to legalize production of the crop’s cousin, marijuana.

“One legislator said, ‘I know what your end game is,’ and I was like, ‘No, you don’t,’” Rodes said at the event co-hosted by the Page County Farmers Association and Page County Economic Development Authority. “They’re thinking it’s a gateway to legalize marijuana.

“There is some of that in the movement. We’re telling the marijuana guys, ‘You go do your thing, we’ll do our thing.’ We try to make a distinction between them,” he added.

Rodes and his family grew 10-acre hemp plots on farmland adjacent to the Shenandoah River in Port Republic in 2016, the first year it was legal to grow for research purposes in Virginia, and in 2017. It’s enabled them to learn a bit more about the plant, which has been banned since the Controlled Substances Act of 1970 was passed.

Part of the research project is to determine whether equipment most farmers use can be used to grow and harvest hemp.

Rodes told the group that he planted hemp with a traditional grain drill and harvested with a rotary combine with good results. The stringy plant became wrapped occasionally, but he said his nephew would usually stop the machine and the stalks would sling off.

Hemp will mature in about 10 weeks, he said, about the time it should be cut.

“You cut it very green,” he said, “because the seed starts to fall off and go to waste if you don’t get in and harvest it.”

Rodes ran a disc mower over the field and round-baled the residue with “no problems to speak of.” The stalks, though, didn’t cut as cleanly as corn.

Weeds caused no problems the first year, he said, and only a few problems the second year. He showed attendees a photo of weeds growing beside the hemp, not within them.

“It’s just an amazing demonstration of how, if the hemp can get a little jump on the weeds, it can outgrow them and choke them out,” he said.

Rodes and his family used precision farming tools to record seeding rates, fertilizer use and yields, and created yield maps to help determine where to fertilize the next year.

Renfroe said that industrial hemp should be planted between May and mid-June in Virginia. A harvestable crop should be available from late August through September.

James Madison researchers plans to experiment with how late hemp can be planted with an eye toward double-cropping.

Once harvested, Rodes said he used the seed to make biodiesel for his equipment and press cake to feed his livestock. The hemp stalks were used for cattle bedding.

Rodes said he has some seed from last year’s crop and a processor in Kentucky has offered an attractive price for it.

“There is a market developing,” he said. “And as you know with a commodity, initially the price is going to be very high. I was offered 80 cents a pound, but that won’t hold up over time.”

The first year, 100 pounds of nitrogen were used on the hemp planting. The second year, only liquid dairy manure was applied.

Hemp seed remains very expensive because it must be imported, Rodes said, with prices ranging from $2.50 to $18 per pound.

“It’s kind of the Wild West out there right now,” he said. “Some of the varieties we’d like to get are extremely expensive.”

Depending on what cultivar is planted, Rodes said seeding rates vary from 15 to 50 pounds per acre. Hemp grown for fiber is typically seeded at a higher rate than hemp grown for seed.

“As we learn what cultivars are best-suited for here, then we can get better data on what the yields are going to be,” Renfroe said. “Then we can start to look at the market opportunities and try to figure out those profit margins.”

Renfroe said that seed price is only part of the expense. Fees associated with importation can push the cost up considerably, costing up to $3,000 to import $5,000 worth of seed.

“That’s why we’ve got to get it delisted so we can grow it here,” he said. “It makes no sense to bring it in from overseas.”

Renfroe said the university is asking farmers to grow plots of 5 to 10 acres in size. That’s enough to provide good yield data but doesn’t place too much burden on the producer, he said.

“Glenn (Rodes) and other people have been very good to us and really taken it on the chin here,” he said. “But they see this as an investment opportunity because when this does open up, Glenn’s already got three years of expertise in growing this. So he knows what he’s doing. He’s going to be ready to hit the market running.”

A bill that would legalize hemp production, the Hemp Farming Act of 2018, is mired in a U.S. House subcommittee.

Renfroe encouraged those in attendance to contact their government representative and encourage them to support the bill, saying legislators are more apt to listen to farmers.

“It’s coming to a head and we’re going to assume it’s going to pass, and the momentum is building,” Rodes said.

It’s well-established that hemp can be grown in Virginia. The British, Renfroe said, required colonists to grow the plant because it was needed to make sales and rope.

The Shenandoah Valley’s fertile soils aren’t the only place hemp can flourish. Renfroe said the plant can be grown in a variety of soils and could be a good replacement crop for tobacco, with the exception of high clay soils.

Hemp has many uses.

Susan Corbett, general manager of River’s Bend Ranch in Stanley, said at the workshop that she’s used hemp bedding for her horses.

“It’s an amazing product,” she said. “I can’t imagine that we couldn’t have an enormous market for bedding in this state with all the horses we have. And I would love to grow it and make my own bedding.”

Rodes and Renfroe said they’re convinced that hemp’s most lucrative market will be as a food source.

Renfroe said he knows a Maryland producer who imports hemp to make energy bars. Over the next three years, the producer plans to buy $21 million in raw material.

Because hemp hasn’t been grown in the U.S. for decades, the nation isn’t ready to process the plant on a large scale, Renfroe said. The country lacks dehulling facilities to remove seed for food production, decorticators to prepare plants for fiber production and fluid extraction facilities to remove cannabidiol oil for medical use.

“We are looking for opportunities to partner with industry, to get them to come into Virginia,” he said. “Perhaps we could form a farming cooperative or a public-private partnership to build infrastructure.”