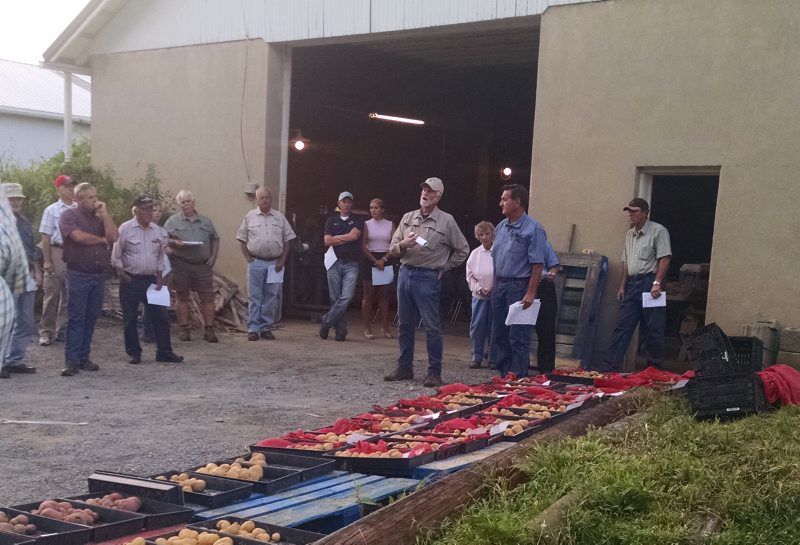 Mike Peck stands by as Bob Leiby talks about the pests that have been attacking this year’s potato crops. 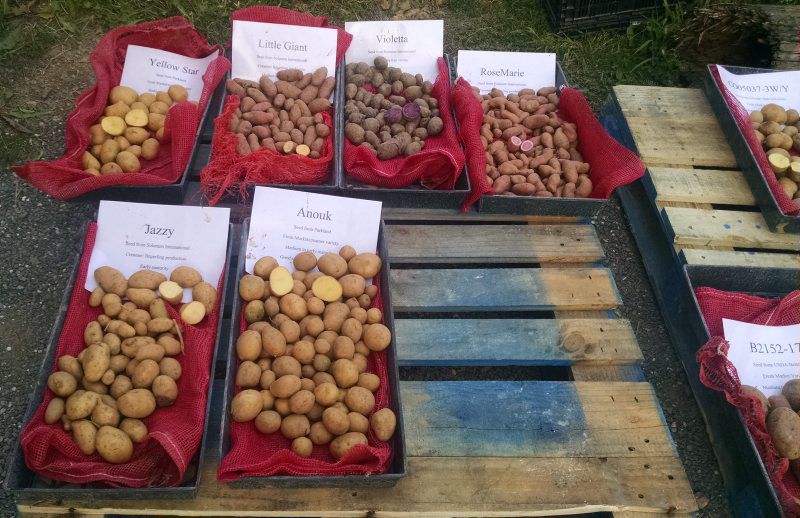 Numerous varieties of potatoes were dug from trial plots for display during the growers meeting.

Mike Peck stands by as Bob Leiby talks about the pests that have been attacking this year’s potato crops.

Numerous varieties of potatoes were dug from trial plots for display during the growers meeting.

BATH, Pa. — More than 25 growers from the Lehigh Valley attended a twilight potato field meeting here last week to see the results of a number of potato trials and discuss pest problems.

Organized by the Pennsylvania Co-operative Potato Growers, Lehigh Valley Potato Growers and Penn State Extension, the meeting was held at Twin Maple Farm, which has been growing potatoes since the late 1930s.

Owner Gary Hunsicker, his son and nephew currently grow 25 acres of potatoes and 25 acres of sweet corn along with diverse vegetables to supplement the potatoes and corn for their farm stand, three farmers markets, and restaurant and grocery accounts.

Their farm was home this year to a number of trial potato plots, which were dug up by Mike Peck, a Penn State plant pathology and microbiology specialist, for review during the meeting.

Also at the meeting was Curtis Frederick, a senior agronomist at Sterman Masser Potato Farms in Sacramento, Pennsylvania.

Frederick has been studying variety and development, and experimenting for table stock production while working on plant breeding and genetics for his Ph.D.

He grew up in Sugarloaf, where his family still growers potatoes, and will be working on trial varieties and integrated pest management strategies with Penn State in the coming season.

Peck said this year’s trials, which were conducted across the state, covered 265 potato varieties, including 12 new chip varieties and genetic variants that are drought tolerant, less prone to silver skirt and scab, or have other specific traits.

The trials on the Hunsickers’ farm followed a four-year rotation of wheat, soy, soy and then potatoes, and included blue and a few fingerling varieties as well as creamers, table stock and chip varieties.

Peck said there has been a noticeable decline in consumer interest in large, round white potatoes.

Peck said he continues to try to integrate the snack food trials into other groups of trials in his quest for new chip varieties, including an early-season variety, and he encouraged the crowd to contact him with their interests for future trials.

Beginning his discussion of pest management, Leiby said he’s noticed more volunteer potato plants lingering from earlier growing seasons than ever before, and he urged growers to pay attention to this in their own fields to prevent the transfer of disease from one season to another.

Leiby said that Dickeya, or Blackleg, is fostered by wet soil and diseased plant pieces, and causes uneven emergence or none at all.

“It’s not getting cleaned up as quickly as I’d like to see,” he said. A multistate committee has been formed and given a $2 million grant to study and tackle this disease.

Leiby also said he found evidence this year of Phytophtora nicotianae, which is a disease usually seen on tobacco, tomatoes and petunias, but not on potato plants.

Potato leafhoppers continue to be a significant field pest, particularly for organic growers. Colorado potato beetles were in full swing but seemed easily knocked back with products like Rymen and Radian.

Leiby urged growers to plant clean seed by using the state seed directory list and getting to know their seed stock growers.

He also advised them to ask for winter test reports from the seed growers, buy specific lot numbers and check for a grower’s North America Certified Potato Seed Health Certificate to avoid contaminated or diseased seed.

Some small lots of seed coming out of south-central Pennsylvania have had issues with seed health, and Leiby urged growers to be vigilant about bringing healthy seed stock into their fields.

Tanner Delvalle from the Schuylkill and Berks Extension office concluded the meeting with a presentation on herbicides and vapor reduction.