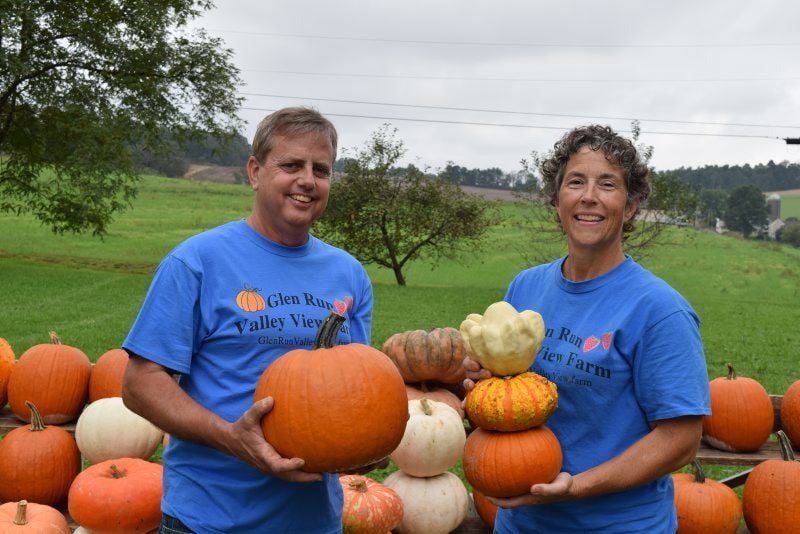 Jeff and Rhonda Stoltzfus show some of the pumpkins they've grown this year at Glen Run Valley View Farm in Atlgen, Pennsylvania. 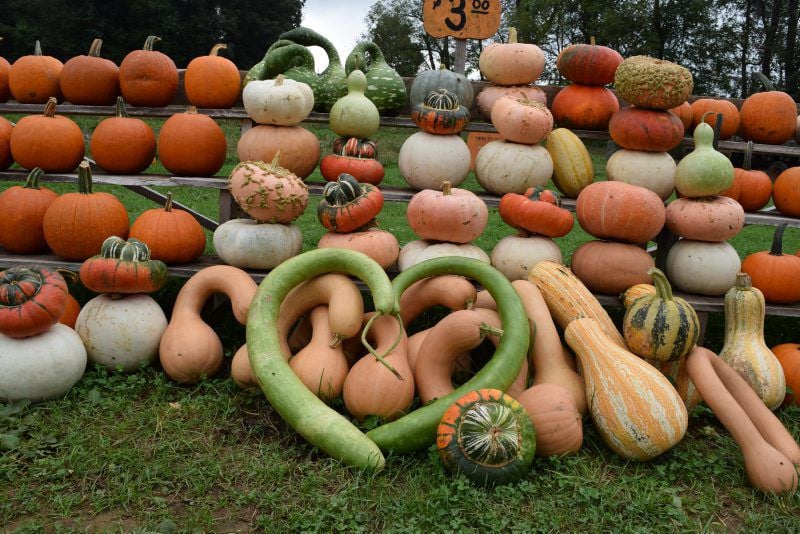 Pumpkins and gourds in unusual colors and shapes are popular with consumers. 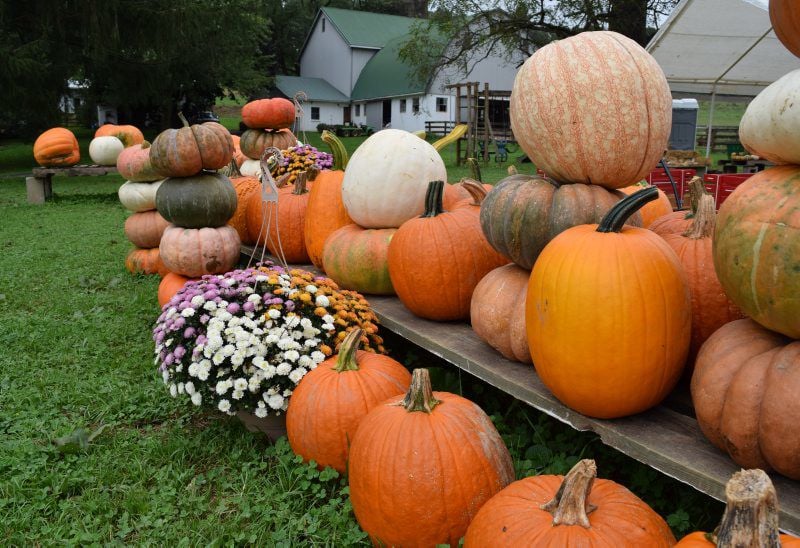 Jeff and Rhonda Stoltzfus show some of the pumpkins they've grown this year at Glen Run Valley View Farm in Atlgen, Pennsylvania.

Pumpkins and gourds in unusual colors and shapes are popular with consumers.

The pumpkins are neatly lined up on risers near the pumpkin putt-putt game.

With such a vibrant display — despite one of the most challenging growing seasons in recent memory — it’s easy to think that agritainment was the couple’s goal all along.

In fact, the Stoltzfuses’ business has evolved a lot in the past 20 years.

Jeff started planting pumpkins in the mid-1990s on the couple’s farm in western Chester County.

He was already producing grain, hay and beef cattle. But after he was hired by a school district to be an adult educator serving local vegetable farmers, he decided he ought to have some experience growing vegetables, too.

Pumpkins were a good fit because they don’t have to be picked the instant they’re ripe like tomatoes or berries.

With an off-farm job, “there are days that you just can’t be here,” Jeff said.

And even then, the couple didn’t start out with the intention of retailing the crop.

They happened to have pumpkins in a field by the road one year, and some people stopped by asking if the pumpkins were for sale.

For a few years after that, the Stoltzfuses placed some pumpkins near the road with a money jar.

Rhonda expanded the display after the couple had children and she stayed home to care for them.

The outdoor sales area now includes rows of harvested pumpkins and gourds, a pick-your-own patch, and a number of pumpkin-themed children’s activities — some inspired by games from the TV show “Survivor.”

Rhonda works off the farm as a substitute teacher and softball coach, but during the farm’s two you-pick seasons — pumpkins and strawberries — she’s the one who does most of the farm work.

The Stoltzfuses grow about 30 varieties of pumpkins and gourds in various sizes and colors.

To fit so many types on their 5 acres of pumpkins, Jeff plants only 50 or 100 seeds of some varieties.

The seeds get mixed together in the planter, so “it’s a little like Christmas when we go out there to see what we find,” he said.

Orange is still the most popular pumpkin color, but the reds, whites and yellows now approach a third of the farm’s retail sales.

Wholesale customers would take more colored pumpkins, but growing more would be tough to justify because many of those varieties are low yielding, Rhonda said.

Though most people buy pumpkins simply as decorations, the Stoltzfuses encourage people to eat them.

Some varieties are bland or stringy, but many, even the quirky peanut pumpkin and Turk’s turban squash, are supposedly tasty.

Jeff, who is now a Penn State Extension educator, will pick pumpkins when he can, but his main role with the crop is planting and spraying it.

He uses a no-till system, rolling down the rye cover crop before planting.

In addition to protecting the soil, the mat of dead cover crop keeps mud off the pumpkins and forms a barrier against soilborne diseases.

The residue also provides cover for mice, one of Stoltzfus’ biggest pest problems.

When he first started no-tilling, Stoltzfus noticed that the rodents zeroed in on the seeds and ate the germ.

He suspected the mice could smell the seeds, so he started masking the smell with a band of capsaicin, a spicy chemical from hot peppers, on top of the row.

The strategy isn’t foolproof, but it helps, he said.

After he plants a field to pumpkins, Jeff likes to rotate it to other crops for three years.

So for the year after pumpkins, he plants soybeans, a crop conducive to herbicide use.

After that, he might grow beans again, or sudangrass to feed the beef cattle.

The cows, as it happens, also love a certain vine crop that the Stoltzfuses grow.

“They help clean up the pumpkin field after the season,” Rhonda said.

Even so, this year’s unusually rainy conditions ramped up disease pressure for the Stoltzfuses and other Pennsylvania pumpkin growers.

“No matter what you did this year you had some issues,” Jeff said.

Soil rots and bacterial rots seem to have been the biggest problems.

Bacterial rots are tough to catch because they break down the pumpkin from the inside out. Infected pumpkins melt down or burst, sometimes after a wholesaler has taken possession of them.

“It was a crop failure for some people,” Jeff said.

The Stoltzfuses didn’t have disease problems on that scale, a relief that they attribute in part to well drained, sloping soils and decent downy mildew control.

They opened their stand on the third Saturday in September and now just have to hope for crisp, clear weekends in October.

Consumer interest in pumpkins evaporates after Halloween, but the farm needs to have a bounty of pumpkins right through the holiday.

“With the cattle eating the extras ... I don’t feel like they’re going to waste as much,” Jeff said.

About two weeks after the stand closes, the Stoltzfuses will host Pumpkin Olympics, an end-of-year blowout.

There’s pumpkin chucking, a massive dump of pumpkins down a hill, even a giant pumpkin that gets dropped onto a donated junk car.

The event started much smaller, as a church youth activity. The Stoltzfuses figured that teenagers like to smash stuff, and if the pumpkins were in the meadow the cattle would do the cleanup.

The event, to be held Nov. 10 this year, now attracts hundreds of people and is a fundraiser for various local causes.

“We haven’t been rained out thus far,” Rhonda said. “This year might be the test of that.”