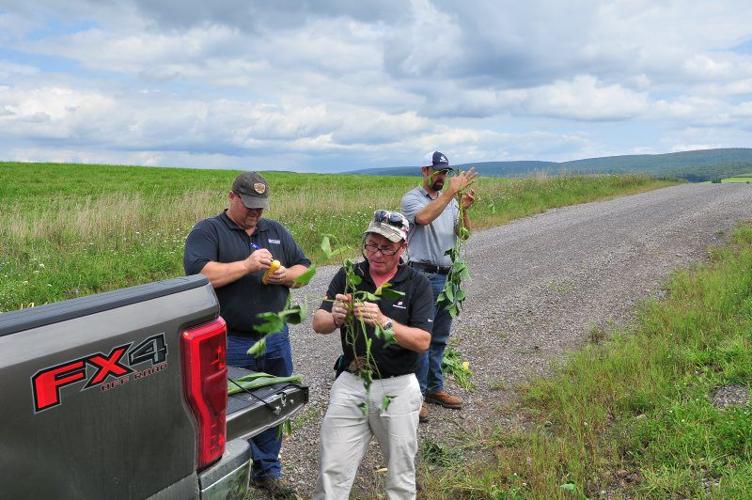 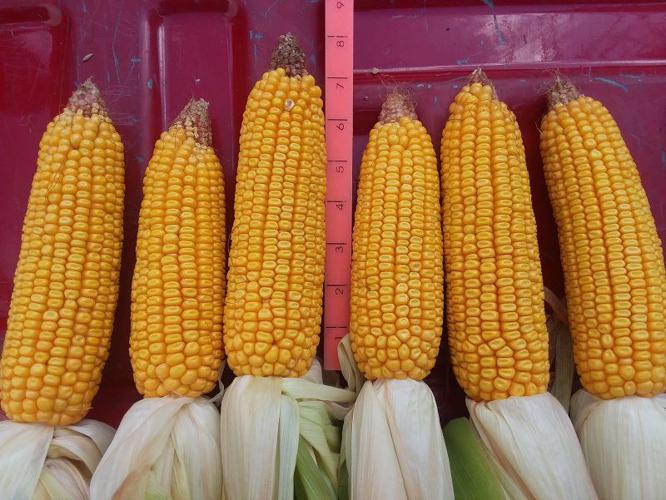 Sample corn ears from a Lehigh County field point to a yield of 221 bushels per acre.

These sales reps found a break in the rainy weather for a crop tour in central Pennsylvania with Extension educator Anna Busch. From left, Ray Pletcher of Timac Agro; Mike Kuhns of Chemgrow; Joel Imgrund, program assistant with Penn State Extension; and Brad Dressler with Channel. 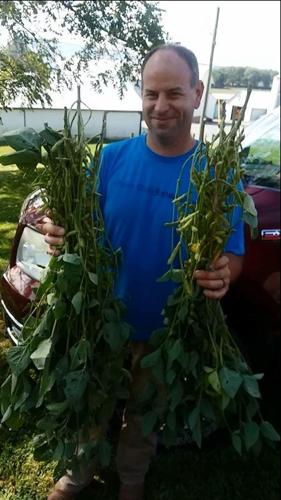 Sample corn ears from a Lehigh County field point to a yield of 221 bushels per acre.

These sales reps found a break in the rainy weather for a crop tour in central Pennsylvania with Extension educator Anna Busch. From left, Ray Pletcher of Timac Agro; Mike Kuhns of Chemgrow; Joel Imgrund, program assistant with Penn State Extension; and Brad Dressler with Channel.

Pennsylvania corn and soybean yields could be OK this year despite disease challenges caused by frequent rains.

Penn State Extension educators and industry reps visited more than 100 grain fields across the state two weeks ago to estimate yields and get a peek at growing conditions.

The crop tour, a new event, is likely to become an annual preharvest occurrence.

“This was essentially a trial run,” said Zach Larson, the Extension educator in Blair County who organized the tour.

Educators tried to pick fields that were representative of their counties, planted during the heart of the growing season, and managed with common practices.

“That’s still not exactly easy considering some of the geography of Pennsylvania,” Larson said.

The data collected on the tour will complement USDA yield estimates by providing more detailed and localized snapshots of conditions.

This information could prove particularly helpful to grain buyers concerned about fungal toxins in grain, and consultants and input suppliers interested in seed performance, Larson said.

Corn in southern Pennsylvania was generally ahead of fields in the north, but the crop varied widely in maturity across the state.

Spring rains made it hard for farmers to get into their fields, said Anna Busch, an Extension educator who visited fields in Columbia, Montour, Northumberland and Union counties.

Some river-bottom ground took a long time to dry out and didn’t get planted till late May or early June.

Another cornfield with an early-planted, early-maturing variety, was already at black layer during the tour.

That farmer could be harvesting in just a few weeks, Busch said.

Generally, farmers in Busch’s region appeared to be on track for a normally timed harvest.

She estimated corn yields at between 150 and 200 bushels per acre in various fields.

“I think diseases are going to be one of the bigger factors this year,” she said.

Gray leaf spot was the most common corn disease statewide. It ranged high into the canopy in some fields, Larson said.

Dave Wilson, an Extension educator who toured Berks and Lehigh counties, saw a field where a farmer had hired a helicopter to apply fungicide to half of a field.

That part of the field was clearly healthier than the control section.

Fungicides haven’t always been a big part of field corn management, but “that may have been a saving grace on some of the farms” this year, Wilson said.

The rarely relenting wetness was particularly conducive to fungal growth.

Foliar diseases like gray leaf spot and northern corn leaf blight will hinder photosynthesis, so they may hurt grain fill and yields.

But they’re different from the ear molds that can produce toxins.

The ear diseases were just starting to appear in the fields Wilson visited, so they shouldn’t be much of a problem in corn silage, which is being chopped now.

Farmers who harvest corn for grain may want to keep an eye out, he said.

These pests varied greatly by region and generally posed low risk to yields.

Voight thinks many cornfields could yield more than 200 bushels per acre, and some with adequate nutrition could approach 300.

Voight is optimistic about soybean yields too, but he cautioned that a lot can still happen.

“Delay in harvest can see significant harvest losses and drift of yield each day the crop is exposed to alternating day and night wetness,” he said.

One early-season strategy that could increase bean yields is decreasing the planting population.

Such side-by-side comparisons are common in research plots, but farmers don’t necessarily do them in their own fields, Wilson said.

Years ago, the rule of thumb was to plant more than 200,000 bean seeds per acre, but research now shows that farmers can get good yields while cutting their seed cost.

That’s because soybean plants will expand, putting out extra branches and pods, to fill the space given to them, Wilson said.

High plant populations do have one advantage.

“We see the canopy closure is quicker, which gives us better competition with the weeds,” Wilson said.

As it has for much of the season, wet weather could challenge farmers as they head into harvest.

“The ground is saturated, and we’re getting more rain,” Wilson said.

On the plus side, some shale ground — typically droughty — is doing better than normal with all the rain, he said.