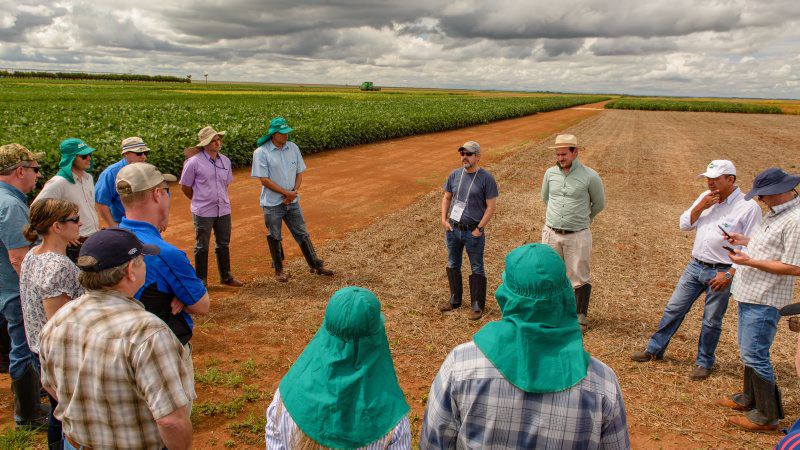 Pennsylvania soybean farmers visit a farm in the Cerrado region of Brazil. 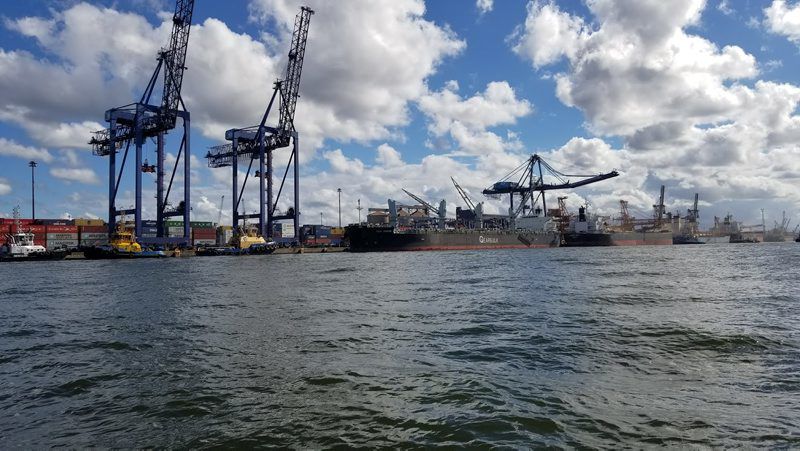 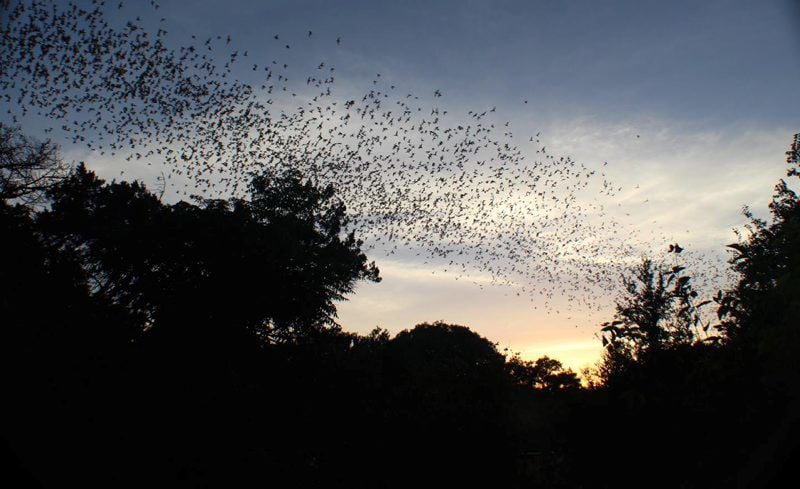 This photo shows dusk at Bracken Cave, on the outskirts of San Antonio, site of the world's largest colony of Brazilian free-tailed bats and where millions roost. 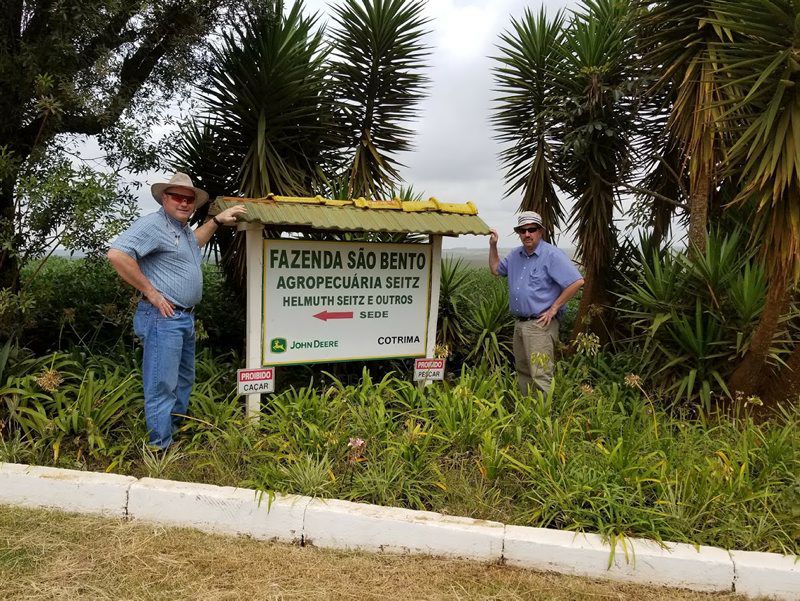 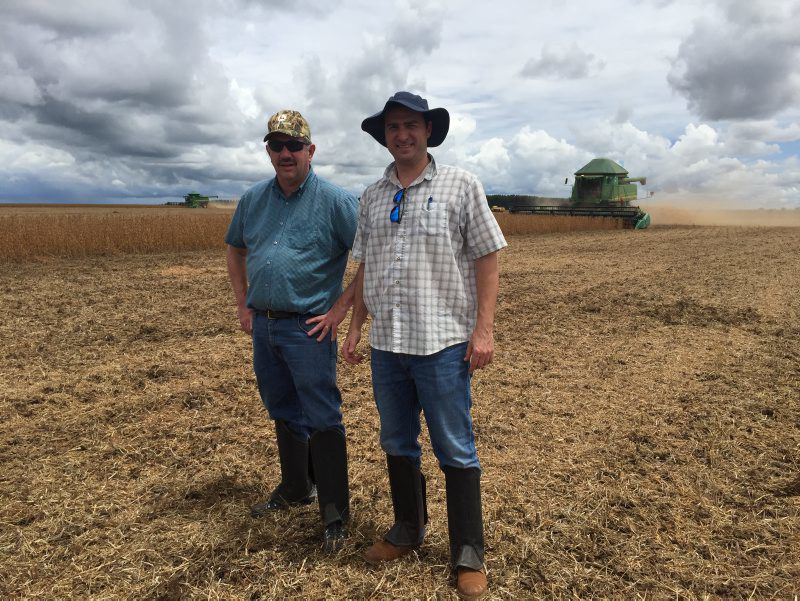 Pennsylvania soybean farmers visit a farm in the Cerrado region of Brazil.

This photo shows dusk at Bracken Cave, on the outskirts of San Antonio, site of the world's largest colony of Brazilian free-tailed bats and where millions roost.

If you can ignore the balmy climate and tropical soils red with iron, a Brazilian soybean field looks a lot like one in the United States.

The yields are similar, biotech varieties are the norm, and soil health practices are catching on.

“They grow lots of soybeans. The landscape is covered in soybeans,” said Greg Roth, a Penn State agronomy professor.

Roth and a dozen other Pennsylvania farmers, researchers and private agronomists got to see this soybean bounty for themselves last month during a tour of some of Brazil’s top soybean-producing regions.

The Pennsylvania Soybean Board provided funding to line up some of the tour stops.

When the Penn State group visited, farmers in central Brazil were midway through harvest and farmers in the south were just starting.

Southern Brazil has a climate similar to Georgia’s, but that region has the production practices most similar to Pennsylvania’s, Roth said.

The tropical soils are low in fertility, but are deep and well drained.

“Many farmers have adopted no-tillage and then cover crops in the off-season,” Roth said.

To make no-till work, farmers need a lot a plant residue because it breaks down quickly in the toasty climate, he said.

U.S. farmers generally consider a crop rotation a multiyear affair, but in the warm climate of Brazil, farmers cycle through an entire rotation in one year, said Giovani Fae, a researcher with Embrapa, Brazil’s counterpart to USDA’s Agricultural Research Service, who is pursuing his doctorate at Penn State.

In the northern parts of Brazil’s soybean country, farmers will follow beans with a dry-season planting of corn interseeded with grass. They’ll come back to soybeans for the next growing season.

In southern Brazil, oats and wheat are typical winter crops.

Corn seems to play second fiddle to soybeans in Brazil, perhaps in part because corn has high nutrient needs. Brazil imports a lot of its fertilizer, Roth said.

Because they grow so many soybeans, Brazilian farmers have to work hard at integrated pest management strategies. Most states even have a “sanitary period” when no one can grow soybeans.

Soybean rust — a disease with only a toehold in the U.S. — is a major challenge in Brazil, Roth said.

Darren Grumbine, who participated in the tour with his wife, Kristen, said Brazilian farmers seem to embrace technology about as much as U.S. farmers do.

The Grumbines are usually the ones who drive the machinery on their operation, but the farm owners they met in Brazil focus on management and pay others to do the field work.

“That allowed (the farm owners) the opportunity to embrace some of the newer scouting platforms,” Grumbine said, adding that low labor costs probably make this situation work.

Co-ops, which may have hundreds or thousands of members, provide a whole suite of supplies and services that farmers need.

“The co-op is their infrastructure,” Grumbine said.

Some co-ops operate as a closed system, while others allow their members to buy or sell outside the fold, Fae said.

Despite the scale and sophistication of Brazil’s soybean farms, the country’s oilseed renaissance is fairly young.

“The whole Brazilian soybean revolution is something that’s taken place in the last 30 years or so,” Roth said.

That’s when farmers from southern Brazil moved to the central part of the country. Plant varieties and management strategies had to be adapted to this warmer climate.Today Brazil produces one-third of the world’s soybeans and rivals U.S. production. Both countries are major exporters.

But Brazil’s infrastructure remains challenging. The group didn’t visit the top soybean state, Mato Grosso, because of the difficulty of travel there, Fae said.

Delivering beans to the port is a long, arduous journey.

When the tour group was still miles away from the major grain export hub of Paranagua, they started seeing trucks parked along the road.

Haulers come early to make sure they don’t miss their scheduled delivery time at the port, Grumbine said.

Brazil has also been dinged in the past for clearing forests to open land for farming.

The country’s soybean heartland is well south of the Amazon rainforest, but Brazil still has an unusual amount of forested area for such a large agricultural producer, Fae said.

And Brazil is hoping to keep things that way.

Farmers are working to implement a national forest code that requires a certain amount of farmland to remain in forest.

The reserve ranges from 30 percent in central Brazil to 80 percent in the Amazon basin, Fae said.

Many of the farming practices the tour members saw wouldn’t translate well to Pennsylvania’s climate or soils, but Grumbine said the trip has motivated him to refine his technique.

He might scout more early in the season or pair soybean varieties with fields where they will do the best.

He’s also concluded that U.S. farmers need to increase the protein content of their soybeans to stand out on the world market.

“We’re not going to be the volume producer. We need to be the quality producer,” Grumbine said.

Fae, the researcher, hopes to continue the cooperation between the two countries by bringing Brazilian farmers to tour the United States.

“We have to grow together, I guess, to collaborate,” Fae said.